Each day we breathe about 20,000 times. All of this breathing couldn't happen without help from the gas exchange system. With each breath, you take in air through your nostrils and mouth, and your lungs fill up and empty out. As air is inhaled, the mucous membranes of the nose and mouth warm and humidify the air.

Although we can't see it, the air we breathe is made up of several gases. Oxygen is the most important for keeping us alive because body cells need it for energy and growth. Without oxygen, the body's cells would die.

Carbon dioxide is the waste gas that is produced when carbon is combined with oxygen as part of the body's energy-making processes. The lungs and gas exchange system allow oxygen in the air to be taken into the body, while also enabling the body to get rid of carbon dioxide in the air breathed out.
Identify the organelle that produces energy 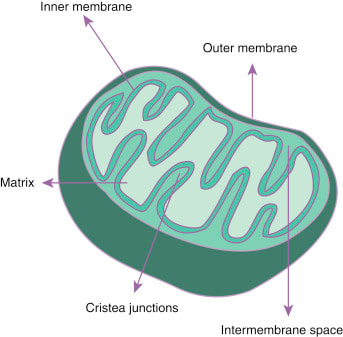 It is the many internal folds of the inner membrane that allow mitochondria to be efficient at producing ATP. And in the presence of oxygen, the organelle is highly efficient. Even though, cells that needs lots of energy may have thousands of these organelles.

The aerobic phases of cellular respiration in eukaryotes occur within organelles called mitochondria. These aerobic phases are the Krebs Cycle and the electron transport chain. Mitochondria are sometimes referred to as the "power plants" of the cell, as these are the organelles that generate most of the cell's supply of ATP.
Define and Explain the process of respiration releases energy in living organisms 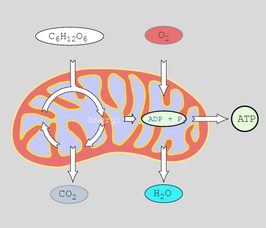 image from bioaktivator.systime.dk
Respiration is the process of releasing energy from the breakdown of glucose. Respiration takes place in every living cell, all of the time and all cells need to respire in order to produce the energy that they require. 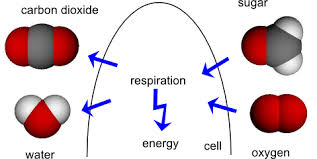 Energy is needed for life processes such as:Respiration is a chemical reaction that happens in all living cells, including plant cells and animal cells. It is the way that energy is released from glucose so that all the other chemical processes needed for life can happen. Do not confuse respiration with breathing (which is properly called ventilation).
State the primary energy sources within an organism 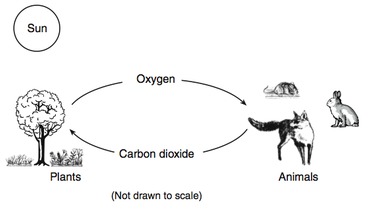 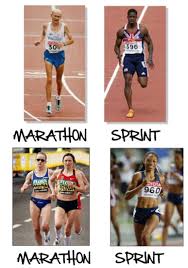 image from txtbody.com
The respiration process is carried out in two ways in living organisms; Aerobic and Anaerobic.

Aerobic respiration:
This is a very complex process and involves chemical reactions during which oxygen is used in converting glucose into carbon dioxide and water. In this process energy is generated in the form of ATP, which are the carriers of energy. The start and end of aerobic respiration is usually the same if the glucose is to be broken down. Although burning is a type of aerobic process, the energy released in it is heat. But in aerobic respiration the release of energy is done in controlled way and hence very little energy is wasted in the form of heat. Most of the energy released is utilized by cells for growth and other activities. 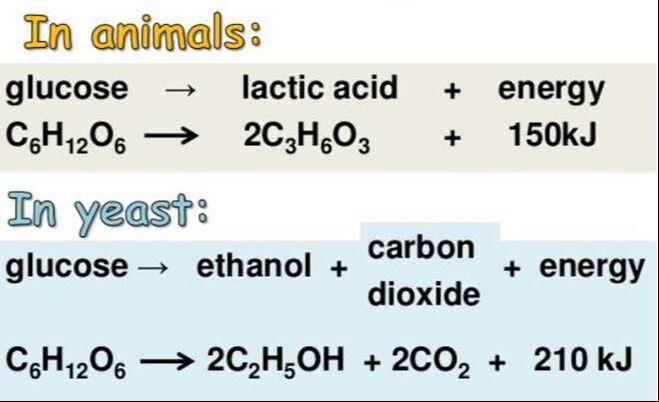 Explain the difference between breathing and respiration 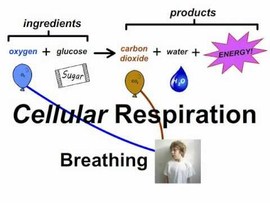 Breathing is the mechanical action of getting air in and out of the lungs.

It is carried out by expanding and contracting the ribcage using the muscles located in between the ribs (these comprise the meat eaten when people have ribs from pork or whatever animal). The diaphragm is another muscle that participates in this process. It is a thin layer of muscle, separating the thoracic cavity  from the abdominal cavity. When the diaphragm moves downwards it pulls air into the body as if it was the plunger of a syringe.

Respiration is the chemical reaction that provides the energy that makes the organism function. It occurs in the cells, more precisely in the mitochondria.

Organisms need energy to move, to keep warm, to perform digestion and other chemical processes.

Respiration is a chemical reaction that tranfers chemical energy contained in the glucose molecule to the ATP molecule, which is the energy "currency" of living things.

Explain the role of diffusion in gas exchange 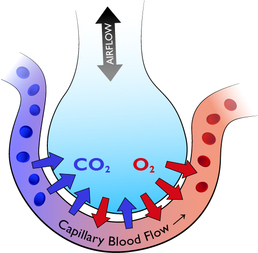 image from ernursescare.blogspot.com
Explain the difference between inhaled and exhaled air 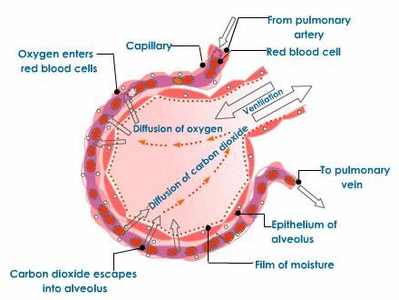 image from www.getting-in.com
Lungs contain millions of microscopic air sacs called alveoli. Each alveolus is made from a single layer of thin, flat cells called alveolar epithelium.  This means there’s a short diffusion pathway (which speeds up diffusion).There is a large number of alveoli in the lungs, which means there’s a big surface area for exchanging oxygen (O2) and carbon dioxide (CO2). The large number of alveoli means there’s a large surface area for gas exchange. The alveoli are surrounded by a network of capillaries which are also single layer thin.
Describe the circulatory system as a system of tubes with a pump and valves to ensure one way flow of blood
throughout the body
The circulatory system is the system of organs that circulates blood and lymph through the body, consisting of the heart, blood vessels, blood, lymph, and the lymphatic vessels and glands. ​The structure of the circulatory system is a blood vessels that transports nutrients and oxygen throughout the body.

Arteries carry oxygenated blood away from the heart. They’re tough on the outside but they contain a smooth interior layer of epithelial cells that allows blood to flow easily. Arteries also contain a strong, muscular middle layer that helps pump blood through the body.

Veins carry the blood back to the heart. They’re similar to arteries but not as strong or as thick. Unlike arteries, veins contain valves that ensure blood flows in only one direction. (Arteries don’t require valves because pressure from the heart is so strong that blood is only able to flow in one direction.) Valves also help blood travel back to the heart against the force of gravity. 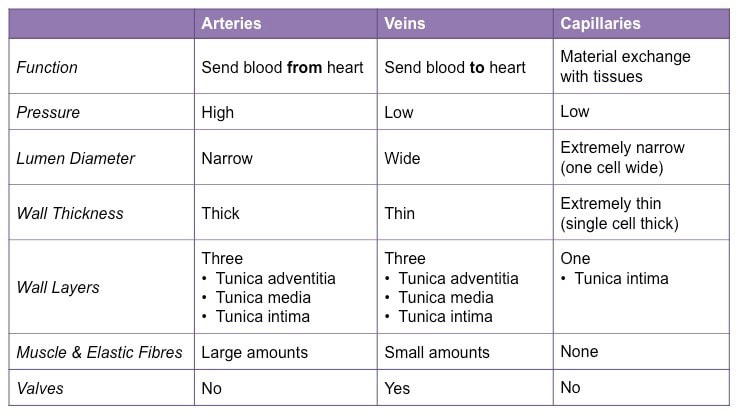 ​Describe the transfer of materials between capillaries and tissue (diffusion and osmosis)
Capillary exchange includes all exchanges that happen at the microcirculatory or capillary level. When capillaries penetrate the tissues, they branch or arborize out to maximize the surface area for the exchange of material that includes gases, nutrients, ions, and waste products. This also minimizes the distance between the capillaries and interstitial regions where such exchanges will occur. Altogether, capillaries contain about 7% of the blood in the body, and they are continuously exchanging material between the interstitial fluid.

Substances are exchanged between capillaries and interstitial fluid via three mechanisms:

The only things excluded from passing through the capillary wall are plasma proteins and whole cells. Other properties that regulate capillary exchange include: 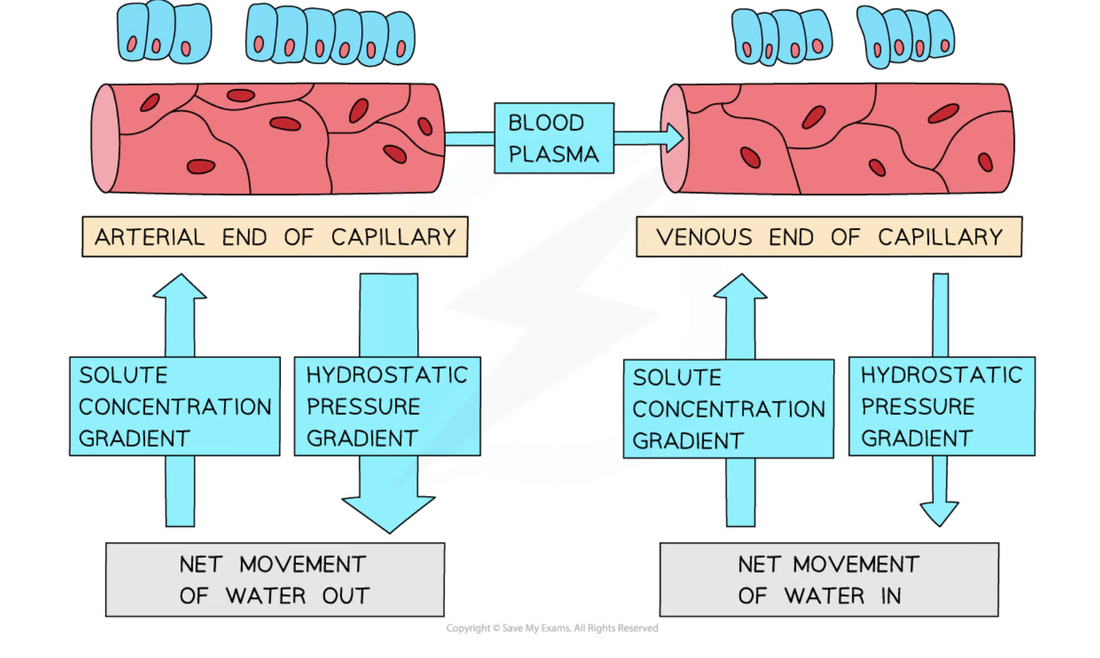 Describe how our body sense that we need to breathe faster
Everyday functions of the body like digesting your food, moving your muscles or even just thinking, need oxygen. When these processes happen, a gas called carbon dioxide is produced as a waste product. The job of your lungs is to provide your body with oxygen and to get rid of the waste gas, carbon dioxide.

When you’re active, your breathing can increase up to about 40-60 times a minute to cope with the extra demand. The delivery of oxygen to your muscles also speeds up, so they can do their job efficiently. The increase in your breathing also makes sure there’s no build-up of carbon dioxide in your bloodstream.
Describe how gas levels differ during light exercise as compared to intense exercise 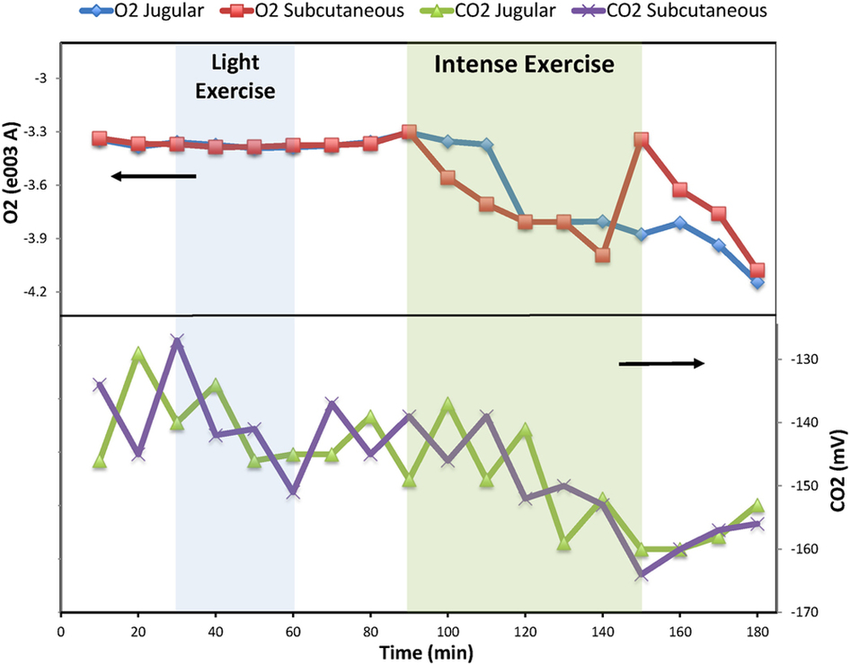 Video clips:
Learn about aerobic respiration and the importance of oxygen and glucose
Respiration is the chemical process that supplies the body with energy for all other life processes: growth and repair of cells, muscle contraction, protein synthesis, sending nerve impulses, absorbing molecules in active transport to name just a few.
Ever wondered why feel all stiff the day after doing lots of exercise, in order for you to contract your muscles they need the energy that is released in respiration. However, when you're doing heavy exercise for a long time the muscles can't always get the oxygen they need to carry out aerobic respiration
​Lauren explores what's actually happening when we make bread. Hint: It involves plenty of yeast, trapping carbon dioxide and linking gluten molecules.
3-D Image of the Diaphragm
Join the Amoeba Sisters for a brief tour through the human respiratory system! This video will discuss why the respiratory system is so important and address major structures such as the pharynx, larynx, trachea, bronchi, alveoli, and lungs.
When you breathe, you transport oxygen to the body’s cells to keep them working, while also clearing your system of the carbon dioxide that this work generates. How do we accomplish this crucial and complex task without even thinking about it? Emma Bryce takes us into the lungs to investigate how they help keep us alive.
Nice video clip on gas exchange
Explore the process of aerobic cellular respiration and why ATP production is so important in this updated cellular respiration video by The Amoeba Sisters!
Animals need oxygen to carry out aerobic respiration and they need to get rid of the waste product called carbon dioxide. This is called gas exchange. Swapping one gas for another.
Fish breathing
​You’d think that animals that lived in water wouldn’t have to drink it -- but some fish do. Learn all about how different kinds of fish get the fresh water that they need to survive.