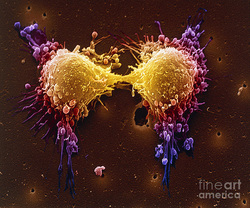 image from fineartamerica.com
Every day, every hour, every second one of the most important events in life is going on in your body—cells are dividing. When cells divide, they make new cells. A single cell divides to make two cells and these two cells then divide to make four cells, and so on. We call this process "cell division" and "cell reproduction," because new cells are formed when old cells divide. The ability of cells to divide is unique for living organisms.Cell division involves the distribution of identical genetic material, DNA, to two daughters cells. What is most remarkable is the fidelity with which the DNA is passed along, without dilution or error, from one generation to the next.
Some cells, like skin cells, are constantly dividing. We need to continuously make new skin cells to replace the skin cells we lose. Did you know we lose 30,000 to 40,000 dead skin cells every minute? That means we lose around 50 million cells every day.  This is a lot of skin cells to replace, making cell division in skin cells is so important. Other cells, like nerve and brain cells, divide much less often.

Assessment Statement
Describe mitosis as nuclear division giving rise to genetically identical cells in which the chromosome number is maintained by the exact duplication of chromosome
Describe:  Give a detailed account.

Mitosis is the process, in the cell cycle, by which a cell duplicates into two genetically identical daughter cells. In mitosis, chromosomes in the cell nucleus are separated into two identical sets of chromosomes, each in its own nucleus.

There are five key stages of mitosis:

Because cytokinesis and interphase often occurs in conjunction with mitosis, "mitosis" is often used interchangeably with "mitotic phase" 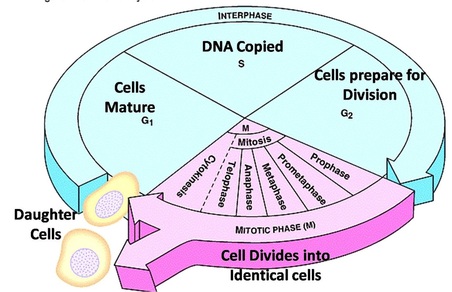 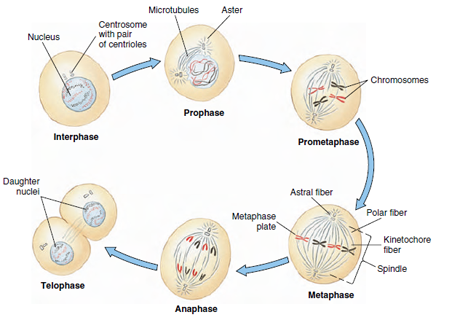 Explain that mitosis occurs during growth, repair, cloning and asexual reproduction
Explain: Give a detailed account of causes, reasons or mechanisms.

Asexual Reproduction
Explain that division of a cell by meiosis produces four cells, each with half the number of chromosomes, and that this results in the formation of genetically different haploid gametes
Explain: Give a detailed account of causes, reasons or mechanisms. 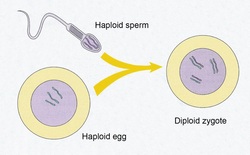 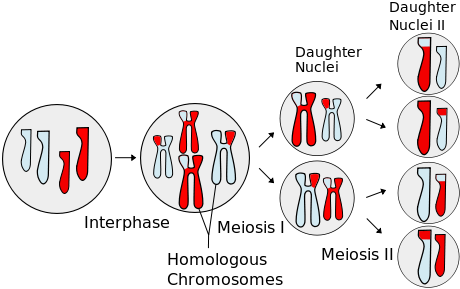 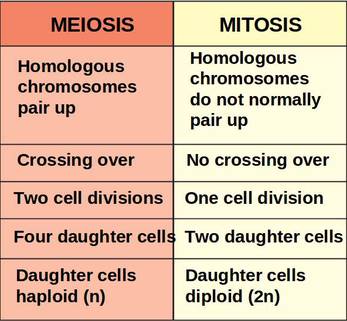 Explain what happens to cells when they do not divide correctly
Explain: Give a detailed account of causes, reasons or mechanisms. 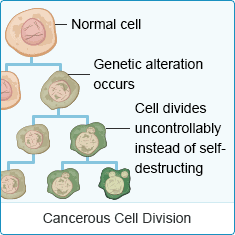 image from www.mesotheliomaguide.com
Each cell makes copies of all its genes. Then each cell splits into two with one set of genes in each new cell. During the process, there are lots of checks to make sure that everything has copied correctly. But sometimes mistakes happen, which can lead to cancer.
Normally genes make sure that cells grow and reproduce in an orderly and controlled way. They make sure that more cells are produced as they are needed to keep the body healthy.
Sometimes a change happens in the genes when a cell divides. The change is called a mutation. It means that a gene has been damaged or lost or copied twice. Mutations can happen by chance when a cell is dividing. Some mutations mean that the cell no longer understands its instructions and starts to grow out of control. There have to be about half a dozen different mutations before a normal cell turns into a cancer cell.
Mutations in particular genes may mean that too many proteins are produced that trigger a cell to divide. Or proteins that normally tell a cell to stop dividing may not be produced. Abnormal proteins may be produced that work differently to normal.
Explain the Hayflick Limit
Explain: Give a detailed account of causes, reasons or mechanisms. 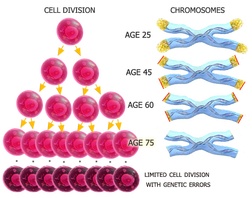 from www.telomerance.com
The Hayflick Limit is a concept that helps to explain the mechanisms behind cellular aging. The concept states that a normal human cell can only replicate and divide forty to sixty times before it cannot divide anymore, and will break down by programmed cell death.
Each mitosis phase slightly shortens each of the telomeres on the DNA of the cells. Telomere shortening in humans eventually makes cell division impossible, and this aging of the cell population appears to correlate with the overall physical aging of the human body. 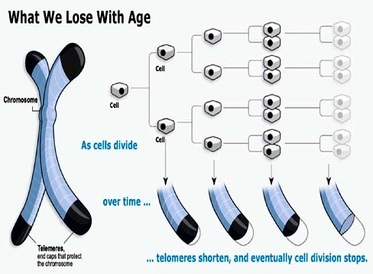 
Videos
In this video Paul Andersen explains the importance of mitosis and details the major steps in the cell cycle. He explains the importance of Interphase, Prophase, Prometaphase, Metaphase, Anaphase, Telophases, and Cytokinesis.
Hank describes mitosis and cytokinesis - the series of processes our cells go through to divide into two identical copies.
In this video Paul Andersen explains the major phases of meiosis including: interphase, prophase I, metaphase I, anaphase I, telophase I, cytokinesis, interphase II, metaphase II, anaphase II, and telophase II. He explains how variation is created in the next generation through meiosis and sexual reproduction.
Hank gets down to the nitty gritty about meiosis, the special type of cell division that is necessary for sexual reproduction in eukaryotic organisms.
Learn the importance of the cell cycle and a real life example when it is not controlled:
How do cancer cells grow? How does chemotherapy fight cancer (and cause negative side effects)? The answers lie in cell division. George Zaidan explains how rapid cell division is cancer’s "strength" -- and also its weakness.
In this video Paul Andersen answers the very simple question: What is cancer? He explains how damage to the DNA can create uncontrolled cell growth. He explains how malignant tumors can spread the disease throughout the body and gives possible treatments
​Ever wonder why we still haven't cured cancer? Join SciShow as we discuss what's wrong with that question and why it's so hard to find a cure.
What is Cancer from the Cancer Treatment Center of America
Dr. Glenn Begley is Vice President and Global Head of Hematology and Oncology Research at Amgen The author of more than 200 scholarly papers and the recipient of numerous awards, Dr. Begley is one of the world's leading researchers in the study of Hematopoietic growth factors. His work has had significant impact in the field of bone marrow transplantation. His talk will reveal some surprising things that most people do not know about cancer