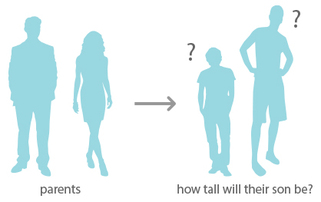 Parents pass on traits or distinguishing characteristics such as eye and hair colour to their children through their genes. Many health conditions and diseases are also genetic. Genes may also influence some behavioural characteristics, such as intelligence and natural talents.

Genes are the blueprint for our bodies. Almost every cell in the human body contains a copy of this blueprint, mostly stored inside a special sac within the cell called the nucleus. Genes are part of chromosomes, which are long strands of a chemical substance called deoxyribonucleic acid (DNA). Therefore, genes are made up of DNA.

Define the terms:
Explain that genes exist in alternative forms called alleles which give rise to differences in inherited characteristics 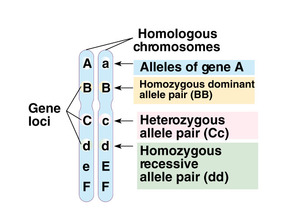 Sexually reproducing species, including humans and other animals, have two copies of each gene. The two copies, called alleles, can be slightly different from each other. The differences can cause variations in the protein that’s produced, or they can change protein expression: when, where, and how much protein is made. Proteins affect traits, so variations in protein activity or expression can produce different phenotypes. 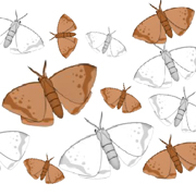 Inherited variation
Variation in a characteristic is the result of genetic inheritance from the parents. Children usually look a bit like their father, and their mother. They will not be identical to either of their parents. This is because they receive half of their inherited features from each parent.

Examples of inherited variation in humans:


Environmental causes of variation
Characteristics of species can be affected by factors such as climate, diet, accidents, culture and lifestyle. For example, if you eat too much you will become heavier, and if you eat too little you will become lighter. A plant in the shade of a big tree will will grow taller as it tries to reach more light.

Variation caused by the surroundings is called environmental variation.


Mixed variation
Some features vary because of a mixture of inherited and environmental causes. For example, identical twins inherit exactly the same features from their parents. But if you take a pair of twins, and twin 'A' is given more to eat than twin 'B', twin 'A' is likely to end up heavier.
State that continuous variation is influenced by genes and environment, resulting in a range of phenotypes between two extremes, e.g. height in humans

The characteristics of an organism, such as its height, shape, blood group or sex, are known as its phenotype. Differences in phenotype between the members of a population are caused by differences in:


Some characteristics are controlled almost completely by the organism’s genotype, with the environment having little or no effect. For example, a person’s blood group (group A, B, AB or O) is controlled by the genes that code for protein
antigens on the surface of their red blood cells. A person’s blood group is not affected by the environment in which they develop. Such characteristics are controlled by genes at a single location and show discontinuous variation.  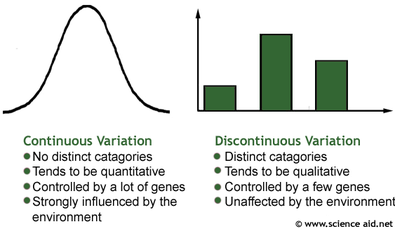 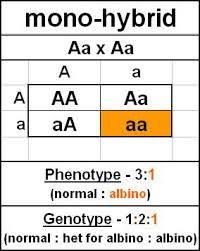 Intepret pedigree charts
A pedigree chart is a tool for genetic or genealogical research. It is similar in structure to a family tree, but is more of a working document. It may include specific information about an area of study, such as hereditary diseases, for example. A pedigree chart may be used for humans, but can also be useful for studying the lineage of show dogs and race horses.

Pedigrees use a standardized set of symbols, squares represent males and circles represent females. Pedigree construction is a family history, and details about an earlier generation may be uncertain as memories fade. If the sex of the person is unknown a diamond is used. Someone with the phenotype in question is represented by a filled-in (darker) symbol. Heterozygotes, when identifiable, are indicated by a shade dot inside a symbol or a half-filled symbol.

​Pedigrees are commonly used in families to find out the probability of a child having a disorder in a particular family. its two most prominent goals are to discover where the genes in question are located (x, y, or autosome chromosome), and to determine whether a trait is dominant or recessive. Pedigrees show an autosomal disease when it is a 50/50 ratio between men and women the disorder is autosomal. it is considered an x-linked disease when most of the males in the pedigree are affected the disorder is x-linked. Another use of the pedigrees is to determine whether the disorder is dominant or recessive. if the disorder is dominant, one of the parent must have said disorder. however, if it is recessive, then neither parent has to have it 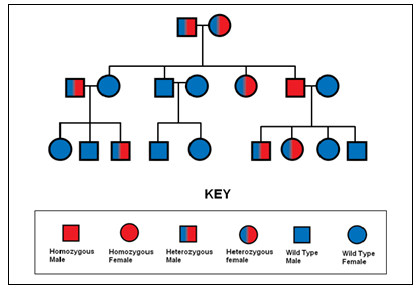 image from starksbiology.wikispaces.com
A particularly important category of genetic linkage has to do with the X and Y sex chromosomes.  These not only carry the genes that determine male and female traits but also those for some other characteristics as well.  Genes that are carried by either sex chromosome are said to be sex linked.

Men normally have an X and a Y combination of sex chromosomes, while women have two X's.  Since only men inherit Y chromosomes, they are the only ones to inherit Y-linked traits.  Men and women can get the X-linked ones since both inherit X chromosomes.


Genes located on the X chromosomes (some cause diseases)
The Y is much smaller, contains few genes 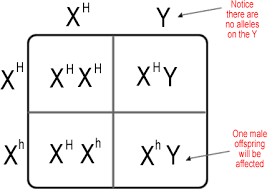 Explain the importance of DNA fingerprinting 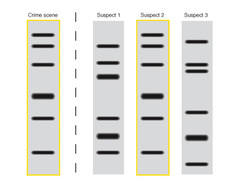 ​DNA fingerprinting is done to:

Find out who a person's parents or siblings are. This test also may be used to identify the parents of babies who were switched at birth.

Solve crimes (forensic science). Blood, semen, skin, or other tissue left at the scene of a crime can be analyzed to help prove whether the suspect was or was not present at the crime scene.

Human DNA profiles can be used to identify the origin of a DNA sample at a crime scene, or test for parentage. 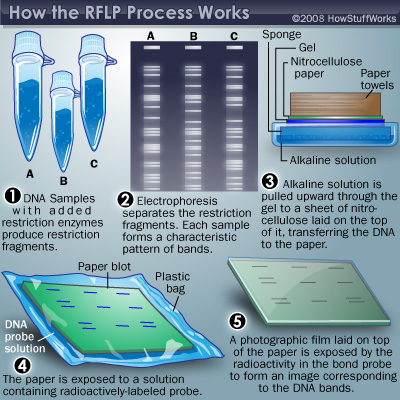 
Video Clips
Paul Andersen explains simple Mendelian genetics. He begins with a brief introduction of Gregor Mendel and his laws of segregation and independent assortment. He then presents a number of simple genetics problems along with their answers. He also explains how advances in genetic knowledge may lead to ethical and privacy concerns.
Paul Andersen introduces the Punnett Square as a a powerful tool in genetic analysis. He tries to address major misconceptions that students have when use a Punnett Square. He gives a number of examples of monohybrid crosses and one example of a dihybrid cross. The square is a simple tool that uses the outcome of meiosis to determine possible offspring in a cross.
Hank and his brother John discuss heredity via the gross example of relative ear wax moistness.
Paul Andersen describes the major mutations found in the living world. He starts with an analogy comparing the information in DNA with the information in a recipe. Changes in the DNA can result in changes to the protein, like changes in the recipe can result in changes in the food. He describes the three major point mutations; substitutions, deletions and insertions. He also describes several chromosomal mutations.
Explore inheritance when carried on the X chromosome with the Amoeba Sisters!
Richard Resnick shows how cheap and fast genome sequencing is about to turn health care (and insurance, and politics) upside down.