In this unit you will learn about how blood circulates through the body and how our bodies are supplied with energy.  ​All cells in the body need to have oxygen and nutrients, and they need their wastes removed. These are the main roles of the circulatory system. The heart, blood and blood vessels work together to service the cells of the body. Using the network of arteries, veins and capillaries, blood carries carbon dioxide to the lungs (for exhalation) and picks up oxygen. From the small intestine, the blood gathers food nutrients and delivers them to every cell.
Describe the circulatory system as a system of tubes with a pump and valves to ensure one way flow of blood
throughout the body 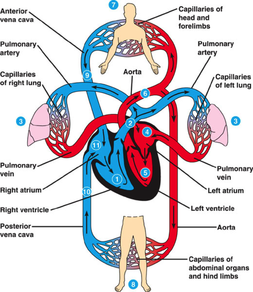 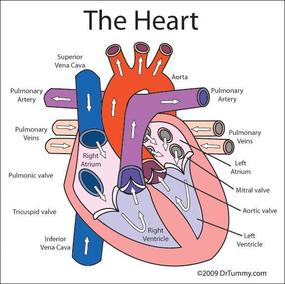 he heart is made up of four different blood-filled areas, and each of these areas is called a chamber. There are two chambers on each side of the heart. One chamber is on the top and one chamber is on the bottom. The two chambers on top are called the atria. If you're talking only about one, call it an atrium. The atria are the chambers that fill with the blood returning to the heart from the body and lungs. The heart has a left atrium and a right atrium. heart diagram animated.

The two chambers on the bottom are called the ventricles The heart has a left ventricle and a right ventricle. Their job is to squirt out the blood to the body and lungs. Running down the middle of the heart is a thick wall of muscle called the septum. The septum's job is to separate the left side and the right side of the heart.

The atria and ventricles work as a team — the atria fill with blood, then dump it into the ventricles. The ventricles then squeeze, pumping blood out of the heart. While the ventricles are squeezing, the atria refill and get ready for the next contraction.
​Describe the structure and functions of arteries, veins and capillaries

There are three kinds of blood vessels: arteries, veins, and capillaries. Each of these plays a very specific role in the circulation process.

Arteries carry oxygenated blood away from the heart. They’re tough on the outside but they contain a smooth interior layer of epithelial cells that allows blood to flow easily. Arteries also contain a strong, muscular middle layer that helps pump blood through the body.

Veins carry the blood back to the heart. They’re similar to arteries but not as strong or as thick. Unlike arteries, veins contain valves that ensure blood flows in only one direction. (Arteries don’t require valves because pressure from the heart is so strong that blood is only able to flow in one direction.) Valves also help blood travel back to the heart against the force of gravity.

​Describe the transfer of materials between capillaries and tissue (diffusion and osmosis)
​Describe coronary heart disease in terms of the blockage of coronary arteries and state the possible causes
​(diet,stress and smoking) and preventive measures

image from en.wikipedia.org
Coronary heart disease is the term that describes what happens when your heart's blood supply is blocked or interrupted by a build-up of fatty substances in the coronary arteries.
Over time, the walls of your arteries can become furred up with fatty deposits. This process is known as atherosclerosis and the fatty deposits are called atheroma.

Atherosclerosis can be caused by lifestyle factors and other conditions, such as: 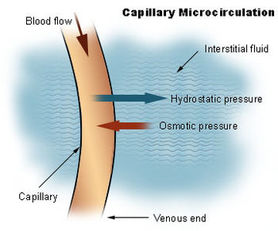 image from en.wikipedia.org
The blood capillaries are where the important functions of the circulation take place: the exchange of material between circulation and cells. Capillaries are the smallest of the body's blood vessels. They are only one cell thick, and they are the sites of the transfer of oxygen and other nutrients from the bloodstream to other tissues in the body; they also collect carbon dioxide waste materials and fluids for return to the veins. They connect the tiny muscular branches of arteries, called​ arterioles, with tiny veins (called venules). Ultimately, the capillary is the site of internal or cellular respiration and is responsible for the utilization of oxygen by the tissue and the transporting of carbon dioxide as waste to the veins for elimination by the lungs
​Identify red blood cells as seen under the light microscope on prepared slides, and in diagrams and
photomicrographs

The erythrocytes are the most numerous blood cells i.e. about 4-6 millions/mm3. They are also called red cells. In man and in all mammals, erythrocytes are devoid of a nucleus and have the shape of a biconcave lens. In the other vertebrates (e.g. fishes, amphibians, reptilians and birds), they have a nucleus. The red cells are rich in hemoglobin, a protein able to bind in a faint manner to oxygen.
In the red cells of the mammalians, the lack of nucleus allows more room for hemoglobin and the biconcave shape of these cells raises the surface and cytoplasmic volume ratio. These characteristics make more efficient the diffusion of oxygen by these cells.
​State the functions of red blood cells 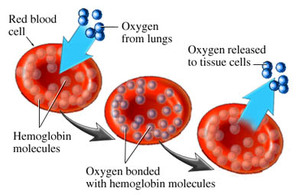 image from www.siliconvalleyfit.com
Red cells contain a special protein called hemoglobin, which helps carry oxygen from the lungs to the rest of the body and then returns carbon dioxide from the body to the lungs so it can be exhaled. Blood appears red because of the large number of red blood cells, which get their color from the hemoglobin. The percentage of whole blood volume that is made up of red blood cells is called the hematocrit and is a common measure of red blood cell levels. 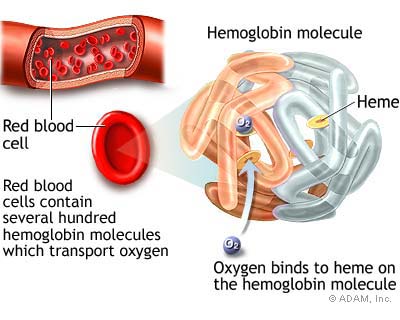 ​Identify plasma as the liquid part of the blood. 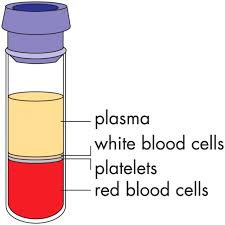 image from funwithmedicine.tumblr.com
Plasma is the clear, straw-colored liquid portion of blood that remains after red blood cells, white blood cells, platelets and other cellular components are removed. It is the single largest component of human blood, comprising about 55 percent, and contains water, salts, enzymes, antibodies and other proteins.

Composed of 90% water, plasma is a transporting medium for cells and a variety of substances vital to the human body.

Plasma carries out a variety of functions in the body, including clotting blood, fighting diseases and other critical functions. 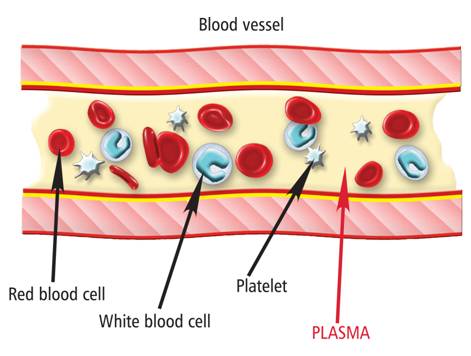 Videos
Bill Nye takes you on a journery through the circulatory system
Biology expert Mary Poffenroth explains the difference between osmosis and diffusion.
Find out how red blood cells carry oxygen around the body
How the heart pumps blood
All about the blood vessles