There are many diseases and health problems that people deal with every day. Whether you are basically healthy, have a chronic disease, or just symptoms you do not understand, your should know how your body responses to invaders.
Recall that bacteria, some fungi and viruses are classified as micro-organisms
Recall: Remember or recognize from prior learning experiences 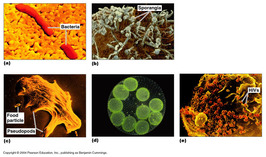 The term microbe is short for microorganism, which means small organism. To help people understand the different types of microbes, they are grouped or classified in various ways. Microbes are very diverse and represent all the great kingdoms of life. In fact, in terms of numbers, most of the diversity of life on Earth is represented by microbes.
Describe how microbes are used in the production of some foods and drinks.
Describe: Give a detailed account or picture of a situation, event, pattern or process

Microorganisms are used to make a wide range of food products.Microorganisms are involved in producing many foods and beverages. Fermentation produces characteristic flavors, aromas, and consistencies of various foods

Dairy industry
It would be impossible to make cheese without a starter culture. As the culture grows in the milk, it converts the sugar lactose into lactic acid, which ensures the correct level of acidity and gives the cheese its moisture. In yoghurt and other fermented milk products, the culture is responsible for the taste and texture of the final product.

Wine industry
Yeasts are responsible for the fermentation process which produces alcohol in wine.
Evaluate the work of scientists on microbes
Evaluate: Make an appraisal by weighing up the strengths and limitations

image from wesmantoddshaw.hubpages.com
Although people have suffered and died from infectious disease for thousands of years, it was only in the 19th century that we really began to understand what actually causes them. Simply observing what happened when illness struck was not enough to help people graph what was causing the problem, and so most European explanations of diseases in earlier centuries relied heavily on the idea of illness as a punishment or trial from God.

The first person to develop an understanding of infectious disease was Ignaz Semmelweis. He realized that the infections suffered by women after childbirth were the result of some infectious agent carried on the hands of the doctors who attended to them.

Today, scientists all over the world are experimenting with viruses, bacteria, and fungi. It is important to understand how these microorganisms function and how can they be used.  Scientists also want to know if the are deadly. That is reason enough to study them.
Scientists are working with microbes in order to create new medicines to save our lives. You might be vaccinated for pox or the flu. Scientists have studied those viruses to see how they act. Then they came up with a way to teach your immune system to do battle. If you get sick at all, you will be able to fight off the infection.
Explain the implications of Pasteur’s and Snow's work
Explain: give a detailed account 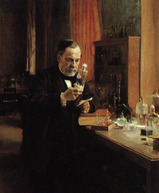 John Snow is most widely known as the "Father of Epidemiology,   His work was ground backing in fighting cholera.Snow showed clearly that there was a correlation between the water supply and the incidence of cholera.  He was not able to demonstrate a causative agent actually in the water. He was not believed because people were unwilling to believe in germs that they could not see, smell or taste. They wanted more evidence before overthrowing an existing theory.

Much of the credit for the development of a widely accepted germ theory of disease must go to Louis Pasteur. Pasteur showed that fermentation is the result of the action of microorganisms on sugar. Many people believed living things could arise from non-living things – a theory know as spontaneous generation. Pasteur was convinced that nay growths that appeared were from microscopic organisms already present in the air.
Recall the names of some of the diseases caused by certain microbes
Recall: Remember or recognize from prior learning experiences 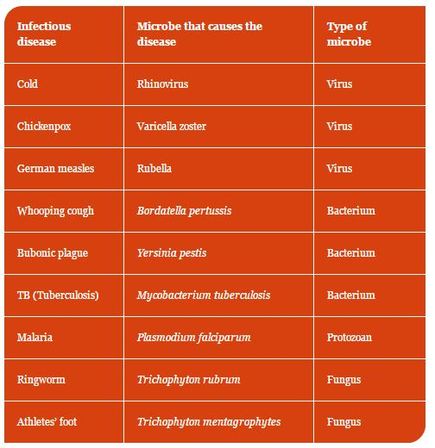 Describe how diseases are spread
Describe: Give a detailed account or picture of a situation, event, pattern or process

Explain the difference between infections and a disease
Explain: give a detailed account

An infection is growth of pathogenic microorganisms in the body, whether or not body function is impaired.

Disease is any change from a state of health; impaired body function. The disease state is associated with the manifestation of symptoms such as fever, pain, aches etc., due to failure of immune system to control in the first round of the growth of infectious agent (s).
Describe the body’s main methods of defence against disease- causing microbes
Describe: Give a detailed account or picture of a situation, event, pattern or process

image from cen.acs.org
Your body has a two-line defence system against pathogens (germs) that make you sick. Pathogens include bacteria, viruses, toxins, parasites and fungi.

The first line of defence (or outside defence system) includes physical and chemical barriers that are always ready and prepared to defend the body from infection. These include your skin, tears, mucus, cilia, stomach acid, urine flow, ‘friendly’ bacteria and white blood cells called neutrophils.

If the pathogens are able to get past the first line of defence, for example, through a cut in your skin, and an infection develops, the second line of defence becomes active. Through a sequence of steps called the immune response, the immune system attacks these pathogens.

The second line of defence is a group of cells, tissues and organs that work together to protect the body. This is the immune system..
Describe how you become immune to diseases
Describe: Give a detailed account or picture of a situation, event, pattern or process 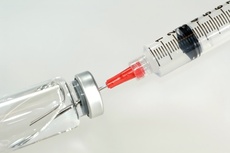 Vaccination belongs to important and effective ways of infectious diseases prevention. Vaccines provide immunity that protects you from disease without the risk of the infection 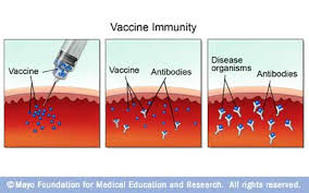 Recall that antibiotics are only effective against bacteria and not viruses
Recall: Remember or recognize from prior learning experiences

Some antibiotics are effective against only certain types of bacteria; others can effectively fight a wide range of bacteria. Bacterial infections include strep throat, most (but not all) ear infections, and some sinus, bladder, and lung infections. Most common infections (such as colds, bronchitis and sore throats) are caused by viruses. Antibiotics should not be used for these viral infections because they don't help, they may cause side effects, and overuse of antibiotics contributes to the growing problem of bacterial resistance.
Some viral infections such as herpes infection, some cases of influenza, and HIV/AIDS can be treated with antiviral drugs. Based on your illness and symptoms (and laboratory tests, if necessary), your doctor can determine if prescribing an antibiotic is appropriate. Your doctor will then select the antibiotic that will work best for your infection
Key Terms
Classroom Material

Ideas for studying diseases and immune system (pdf)
Immune System drama (in class assignment)
An Inside Look at the Flu (worksheet)
Blood Cartoon activity
Health Hazards
Should Parents Have the Right to Refuse Standard Childhood Vaccinations? (In class research)

Video Clips
Where does bread get its fluffiness? Swiss cheese its holes? And what makes vinegar so sour? These foods may taste completely different, but all of these phenomena come from microorganisms chowing down on sugar and belching up some culinary byproducts. Erez Garty shows how your kitchen functions as a sort of biotechnology lab, manned by microorganisms that culture your cuisine.
Louis Pasteur, the father of vaccine, was born in Dole
Edward Jenner story as a cartoon
For several centuries, people though diseases were caused by wandering clouds of poisonous vapor. We now know that this theory is pretty ridiculous, and that diseases are caused by specific bacteria. But how did we get to this new idea of germ theory? Tien Nguyen describes the work of several scientists who discredited a widely accepted theory in a way that was beneficial to human health.
Hank scares our pants off with a tale of the five deadliest infectious diseases in the world
How Scientists discovered infectious diseases
All living things are made of cells. In the human body, these highly efficient units are protected by layer upon layer of defense against icky invaders like the cold virus. Shannon Stiles takes a journey into the cell, introducing the microscopic arsenal of weapons and warriors that play a role in the battle for your health.
Influenza, Smallpox, AIDS, HIV, Plague, Black Plague, Disease, Amazing
Bacteria! They begin with just the one...
See how Cholera was discovered as a health hazard and the steps involved in finding a cure.
How the city of London developed the public health system
If you've ever wondered how your immune system works, this movie about the Immune System is for you! The Flu
Immune system response
A dose of reality about vaccines
Fewer children in the United States are getting vaccinated. That’s bad news for those kids, and also for public health in general. Often, the response is to argue and debate and get angry at people who are we see as making terrible, irrational decisions. Instead of doing that, let’s use science to understand why this is happening in the first place.
Meet the superheroes of modern medicine! Since its creation in 1796, vaccination has been saving