Natural selection is Darwin’s most famous theory; it states that evolutionary change comes through the production of variation in each generation and differential survival of individuals with different combinations of these variable characters. Individuals with characteristics which increase their probability of survival will have more opportunities to reproduce and their offspring will also benefit from the heritable, advantageous character. So over time these variants will spread through the population.
Describe the process of evolution by means of natural selection 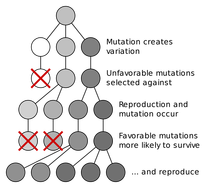 image from en.wikipedia.org
Natural selection is the process by which species adapt to their environment. Natural selection leads to evolutionary change when individuals with certain characteristics have a greater survival or reproductive rate than other individuals in a population and pass on these inheritable genetic characteristics to their offspring (Survival of the Fittest). Simply put, natural selection is a consistent difference in survival and reproduction between different genotypes, or even different genes, in what we could call reproductive success.

Describe variation and state that competition leads to differential survival of, and reproduction by, those
organisms best fitted to the environment 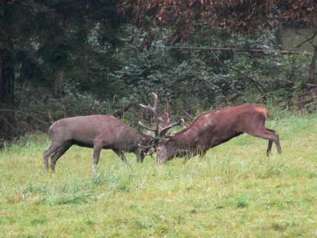 Some of the characteristics possessed by an individual in a population can be said to be inherited.  These characteristics are passed on as a result of sexual reproduction. Sexual reproduction also introduces an element of randomness, so that variation is brought about in a population. These two almost contradictory factors - dependable inheritance of characteristics from parents, and variation within the population - are essential to an understanding of the process of evolution.
Assess the importance of natural selection as a possible mechanism for evolution

Natural selection is one of the driving mechanisms of evolution. The compelling logical process of natural selection is clear in producing adaptive changes within a species, such that it evolves to be more competitive in its environment.


Natural Selection is often used synonymously with Evolution; however, they have very different meanings. Here are some very important points about natural selection and evolution: 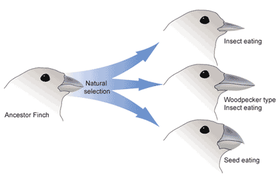 image from www.boundless.com
Evolution is a change in the gene pool of a population over time. A gene is a hereditary unit that can be passed on unaltered for many generations. The gene pool is the set of all genes in a species or population.
Recognize that the theory of evolution is a scientific explanation based on a large accumulation of evidence

image from darwin200.christs.cam.ac.uk
A scientific theory is "a well-substantiated explanation of some aspect of the natural world, based on informational facts that have been repeatedly confirmed through observation and experiment. Theories are formed from hypotheses that have been subjected repeatedly to tests of evidence which attempt to disprove or falsify them. In the case of evolution through natural selection.

The "theory of evolution" is actually a network of theories that created the idea of how organisms evolved.  The fossil record is one of the most common evidences given for evolution.
Define natural selection as the greater chance of passing on of genes by the best adapted organisms

In The News:
Genetic clue to how limbs evolved from fins from BBC Science
Read the article on Evolution: Fact or Theory.
Scientific America article Origins of Life .

Video Clips:
Antibiotic Resistance
Recently, a new strain of Panama disease has attacked bananas in South Asia. Some producers expect the strain to spread throughout the globe. Could this mean the end of the banana as we know it? Join Ben Bowlin as he explores the future of the banana.