In the Climate Change unit, we take a look at how certain gases, the most important of which are carbon dioxide and water vapour, enable the atmosphere to retain heat. Without these gases in the atmosphere, the Earth's temperature would be too low to support life. We will also look at how the warming effect of these gases known as the greenhouse effect  caused in a similar way to the warming of a greenhouse.

​This unit will last 3 school days
​Essential idea:
Nature of science:
Understanding
4.4.U 1 Carbon dioxide and water vapour are the most significant greenhouse gases.
Greenhouse gases absorb and emit long-wave (infrared) radiation, thereby trapping and holding heat within the atmosphere 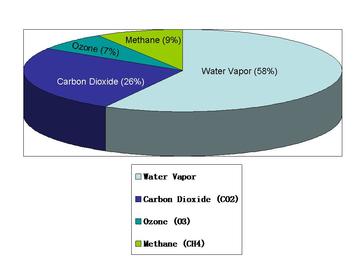 image from Debate.org
U 4.4.U2 ​Other gases including methane and nitrogen oxides have less impact.
Methane has the third greatest impact on the greenhouse effect. It is emitted from marches, other water-logged habitats and from landfill sites containing organic wastes.

Nitrous oxide, which is another significant greenhouse gas is released naturally by bacteria in some habitats and also by agriculture and vehicle exhaust.

Global Warming Potential (GWP) is been developed to make comparisons of the global warming impacts of different GHGs. 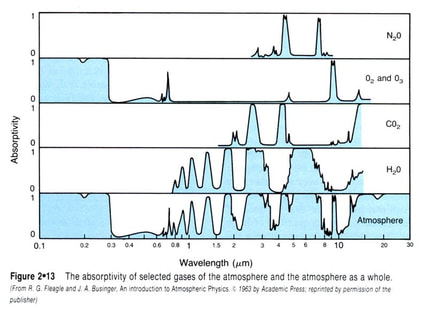 image from The Competition World
4.4.U5 Longer wave radiation is absorbed by greenhouse gases that retain the heat in the atmosphere
Greenhouse gases such CO2 and water vapor absorb this heat (infrared radiation) trapping it within the atmosphere, further warming the earth.
70-75% of the solar radiation reaches the earth’s surface, with a high percentage of this radiation being converted into heat
As the infrared radiation is reflected back off the earth, a large percentage of this heat is captured by the greenhouse gases in the atmosphere. This energy is re-emitted, thus heating up the earth’s atmosphere. This effect is called global warming.
The ability of the earth’s surface to reflect light is called the albedo effect. Light colored and white objects such as snow and ice, have a high albedo and therefore little light is absorbed and less heat is produced. Black and dark colored objects like asphalt and pavement have a low albedo, and therefore absorb more light and produce more heat.
With the spread of urban cities and areas, a greater amount of heat is being produced 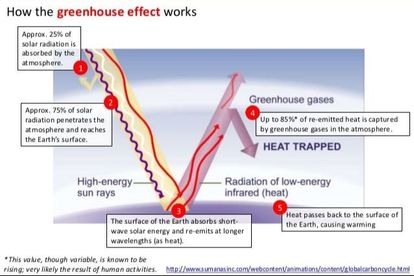 4.4.U6 ​Global temperatures and climate patterns are influenced by concentrations of greenhouse gases.
Climate refers to the patterns of temperature and precipitation that occur over long periods of time. Climate changes over thousands or millions of years. Climatologists and palaeoclimatologists collect and study data about atmospheric conditions in recent decades and from the distant past in order to infer what the climate was like thousands to millions of years ago. 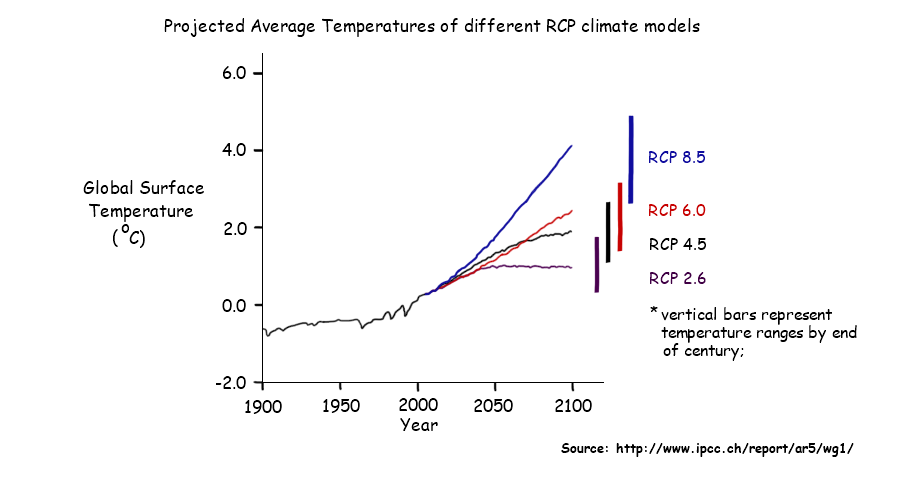 Key Global Temperature Projections
​(IPCC 2013: http//www.ipcc.ch/report/or5/wg1/
4.4.U7 ​There is a correlation between rising atmospheric concentrations of carbon dioxide since the start of the industrial revolution 200 years ago and average global temperatures

Graph (IPCC 2007 report) above shows that the global mean temperature has increased since the start of the Industrial Revolution
​
​Graph also shows the rate of temperature increase (the steepness of the slope: red, blue, orange, becomes larger as more of the world became industrialized
​4.4.U8  Recent increases in atmospheric carbon dioxide are largely due to increases in the combustion of fossilized organic matter.
As described above, since the industrial revolution the amount of CO2 has drastically increased, largely due to the increasing quantities of combustion of fossilized organic matter (coal, oil and natural gas). The number one source of carbon emissions due to human activities is through combustion of fossil fuels in automobiles, buses and planes.
Another source of carbon dioxide is the deforestation through burning large tracks of land and heating homes with fossil fuels, such as natural gas. Humans demand for meat has led to large numbers of cattle, which is responsible for releasing methane into the atmosphere, which is changed into carbon dioxide. As the human population increases and countries become more industrialized, human production of greenhouse gas, shows no sign of slowing down 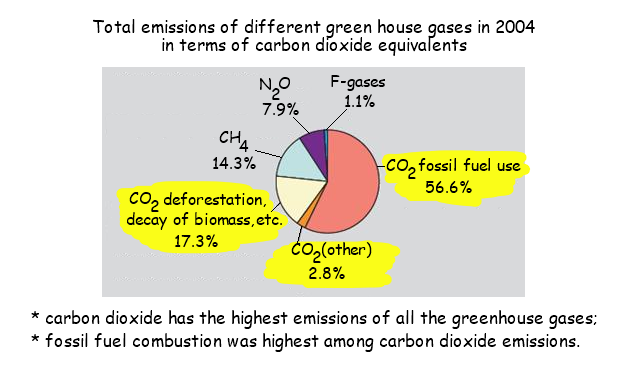 Application
4.4.S1 Threats to coral reefs from increasing concentrations of dissolved carbon dioxide.
Ocean acidification is the ongoing decrease in the pH of the Earth's oceans, caused by the uptake of carbon dioxide from the earth’s atmosphere. Over 500 billion tons of CO2  released by humans since the start of the industrial revolution have been dissolved in the oceans. pH of surface layers of the earth’s oceans in the late 18th century ≈ 8.1179 currently ≈ 8.069, which represents about a 30% acidification.

Reef-building corals that use calcium carbonate in their exoskeletons need to absorb carbonate ions from seawater.

Volcanic vents in the Gulf of Naples have been releasing carbon dioxide into the water for thousands of years, reducing the pH of the seawater. In this area of acidified water there are no corals, sea urchins or other animals that make their exoskeletons from calcium carbonate. In their place other organisms like invasive algae and sea grasses flourish. Unfortunately this could be the disheartening future for coral reefs around the world if carbon dioxide emissions continue to rise… Loss of tropical coral reefs to acidification could cost $1 trillion by 2100 in terms of lost shoreline protection and lost revenues for the tourism and food industries. 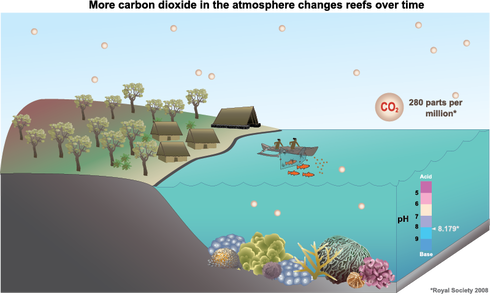 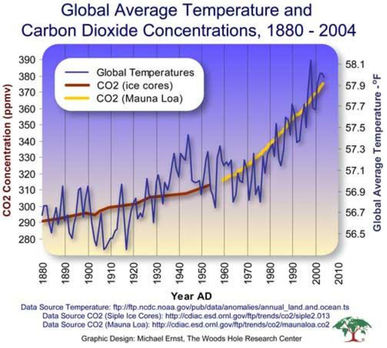 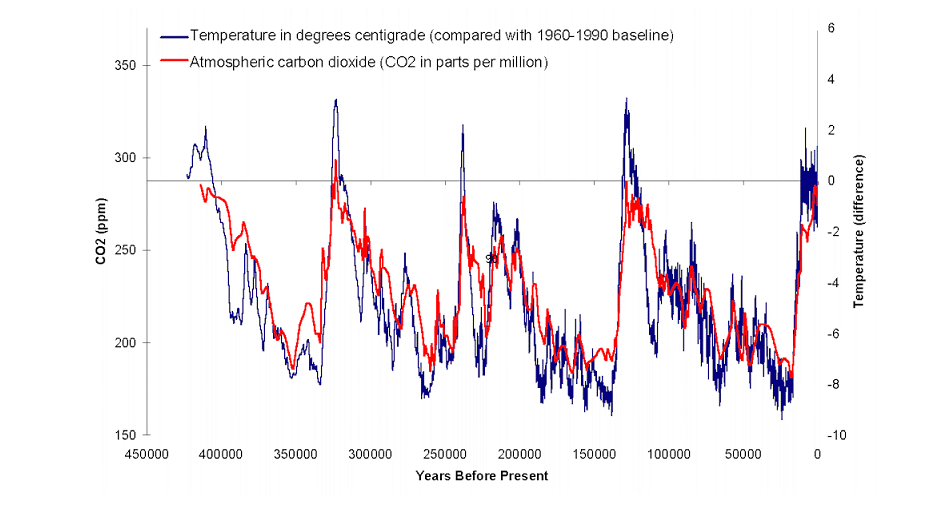 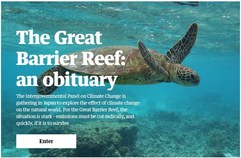 ​STARTER and DISCUSSION
This interactive multimedia resource by the Guardian can be used as a starter of discussion prompt on the effect of carbon pollution upon a reef ecosystem (4.4.A1 Threats to coral reefs from increasing concentrations of dissolved carbon dioxide)
Modeling the Greenhouse Effect Lab
Mauna Loa lab activity

Topic 4.4 Review Sheet
PowerPoint and Study Guide on Topic 4.4 by Chris Payne
Correct use of terminology is a key skill in Biology. It is essential to use key terms correctly when communicating your understanding, particularly in assessments. Use the quizlet flashcards or other tools such as learn, scatter, space race, speller and test to help you master the vocabulary.
Useful Resources

The Natural Greenhouse Effect:
Animated tutorial from Damocles.
Simple tutorial from UCSD and another from the BBC
Earth's Climate: Back to the Future


Climate change and the enhanced greenhouse effect:
Try this PhET Lab simulation: The Greenhouse Effect (allow Java to run)
The NASA Climate Change Resource Reel has loads of video and animation clips which download as .mpg files when you click on them.
Good Climate Change teaching resources from Cutting Edge
The Ultimate Climate Change FAQ from the Guardian
Warming over the last 130 years, by NASA​

So they key issue is this: we suspect that human activity leads to climate change. We are still collecting data to support (or refute) this hypothesis, and the evidence is growing stronger and stronger that anthropogenic climate destabilisation is true. In the meantime, should we wait for more evidence before taking action or should we take preventative and remedial measures now, in order to get a ‘head start’?

Topic link: how does ocean acidification link to the chemistry of life unit?

Finally, a concise article on Why the Global Warming Skeptics are wrong, from the New York Review of Books.
Nice animated gif from http://www.skepticalscience.com/pics/SkepticsvRealistsv3.gif
In The News

Arctic Warming Twice as Fast as Rest of World (2013-08-06)
Fixing Climate Not So Easy (2013-08-12)
Today's Climate Change Proves Much
Faster Than Changes in Past 65 Million Years (2013-08-02)
A Reprieve From Warming, Thanks to the Pacific (2013-08-28)
Northern forests rev up carbon cycle (2013-08-08)
Mounting Consequences as Arctic Sea Ice Melts (2013-08-01)
The polar bear who died of climate change (2013-08-06)
Climate Update: Warming Temperatures (2013-08-09)
Climate Change Leaves Hares Wearing The Wrong Colors (2013-09-08)
Arctic sea-ice minimum is sixth smallest on record (2013-09-18)
Freighter Makes First-Of-Its-Kind Transit Of Northwest Passage (2013-09-27)
How Climate is Changing the Acidity of the Ocean from BBC Science
International-mindedness:​
TOK:
Videos:
A musical investigation into the causes and effects of global climate change and our opportunities to use science to offset it.  Featuring Bill Nye, David Attenborough, Richard Alley and Isaac Asimov.  "Our Biggest Challenge"  is the 16th episode of the Symphony of Science series by melodysheep​
​The most up-t0-date and reliable data-based information can be found on the annual NOAA Arctic Report Card. This quick video from NASA gives an overview:
Threats to the Arctic, from the WWF, and a nice summary of the effects of global warming on the Arctic, from CIEL. the Guardian also has an article on the disappearing world of the last of the arctic hunters.
​In this TED Global 2010 talk, Lee Hotz describes the work of researchers in the Antarctic, studying the history of our planet’s climate, through drilling ice-cores that go back in thousands of years.
​TED Talk from Rob Dunbar, on the Mission Blue Voyage, about the dangers of ocean acidification and how we are discovering ancient climates in the oceans and ice:
​In which Hank details the five scariest things that will likely happen because of climate change.
​Here’s a nice explanation of the ‘debate’:
NOAA's Mauna Loa Observatory on the Big Island of Hawaii,is a leading atmospheric research facility. The observatory has been collecting and monitoring data relating to atmospheric change since the 1950s. Dr John Barnes, the Station Chief for the observatory, describes the functions of the MLO, which provides valuable long-term and continuous recording of data.
​The Precautionary Principle
We can’t afford to wait any longer to act on climate change
Reference sites