D.4: Function of the heart 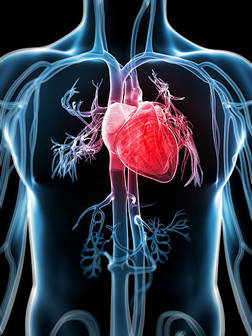 In the Functions of the Heart unit is an extension of Topic 6.2 The Blood System. However, the emphasis will be on the function and structure of the heart. We will learn how electrical impulses sent from the brain regulate the heart beat and how this can measured. We will also look at factors that can affect the function of the heart.

This unit will last 4 school days.
​Essential idea:
​Nature of science:
Understandings:
D.4 U 1 ​Structure of cardiac muscle cells allows propagation of stimuli through the heart wall.
Cardiac muscle tissue is unique to heart.  It is striated in appearance and contractile proteins actin and myosin is similar to that of skeletal muscles.  Cardiac muscles are shorter and wider than skeletal and have only one nucleus where skeletal has many.

Contraction of cardiac is not voluntary.

Cells are Y-shaped and join end to end in a network of interconnections.  When two cell ends meet they are connected by a specialized junction called an intercalated disc (only in cardiac cells).  The disc consist of a double membrane containing gap junctions that provide channels of connected cytoplasm between the cells. This allows rapid movement of ions and low electrical resistance.  The Y shape and being electrically connected by gap junctions allows a wave of depolarization to pass easily from one cell to a network of other cells and a synchronization of contraction.  So heart contracts as one large cell.

​Lots of mitochondria found in cells to supply energy. 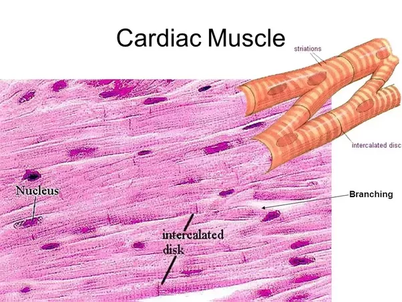 image from Quora
D.4 U 2 ​Signals from the sinoatrial node that cause contraction cannot pass directly from atria to ventricles.
Cardiac cycles is a repeating sequence of actions in the heart that result in pumping of blood to lungs and body. Cycle starts with beginning of one heartbeat to the beginning of next.  Contraction of heart’s chambers is systole and relaxation is diastole. 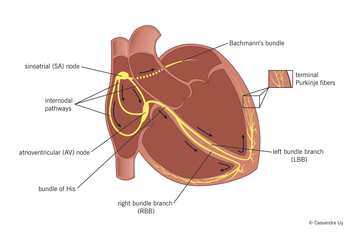 D.4 U 3 ​There is a delay between the arrival and passing on of a stimulus at the atrioventricular node.
The contractions of the atria and ventricles must be staggered so blood flows in the correct direction.  When action potential is delayed about 0.12 seconds. Action potential starts at SA node and travels to the AV node.  The fibers in the AV node take longer to become excited.

​Reasons why:  They have smaller diameter and don’t conduct as quickly, reduced number of Na+ channels in membranes, fewer gap junctions between cells, more non-conductive connective tissue in node. 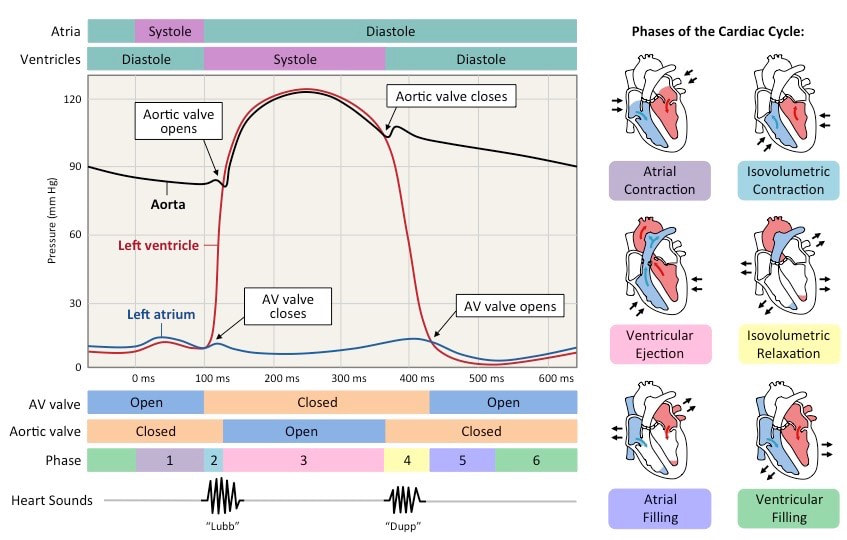 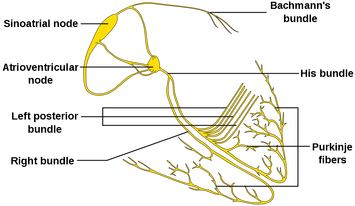 image from commons.wikimedia.org
D.4 U 6 ​Normal heart sounds are caused by the atrioventricular valves and semilunar valves closing causing changes in blood flow.
A normal heartbeat has two sounds, both caused by the closing of valves: 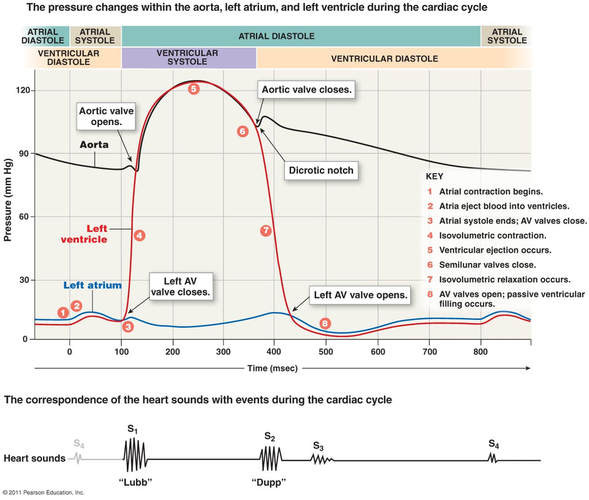 Application
D.4 A 1 Use of artificial pacemakers to regulate the heart rate.
Pacemakers are medical devices that are surgically fitted in patients with malfunctioning sinoatrial  node.  The devices maintains the rhythmic nature of the heartbeat.  They can provide a regular impulse or discharge only when heartbeat is missed so that it beats normally.  Most common is the one that monitors heartbeat and initiates one if a beat is missed.  The ventricle is stimulated with a low voltage pulse. 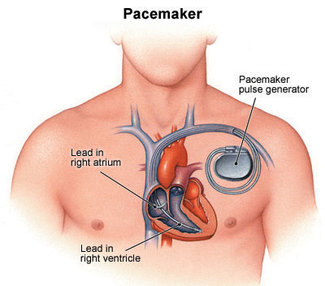 image from Intensive Care Hotline
D.4 A 2 ​Use of defibrillation to treat life-threatening cardiac conditions.
Cardiac arrest occurs when blood supply to hear is reduced and heart tissues are deprived of oxygen. First negative consequences of abnormalities in cardiac cycles is ventricular fibrillation or twitching of ventricles due to rapid and chaotic contractions.

Defibrillation is a technique used in emergency medicine to terminate ventricular fibrillation or pulseless ventricular tachycardia. It uses an electrical shock to reset the electrical state of the heart so that it may beat to a rhythm controlled by its own natural pacemaker cells. It is not effective for asystole (complete cessation of cardiac activity, more commonly known as "flatline") and pulseless electrical activity (PEA).

However, if not enough energy is used for defibrillation, the heart may not be completely depolarized, in which case the ventricular tachycardia or fibrillation may not be terminated. Also, if the heart itself is not getting enough oxygen or if there is an instability of the electrolytes in the cardiac cells, the ventricular arrhythmia may recur. 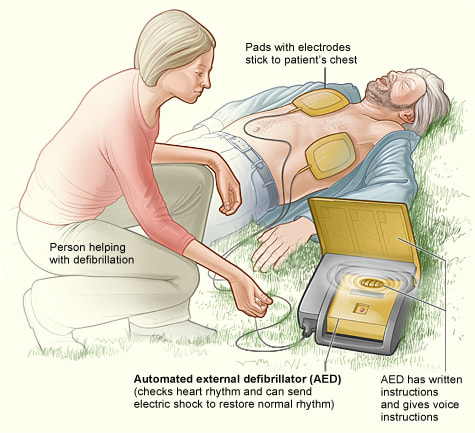 image from Australian Defibrillators
D.4 U 3 ​Causes and consequences of hypertension and thrombosis.
AtherosclerosisHypertension:
Thrombosis
The formation of clots inside blood vessels. The incidence of thrombosis is correlated with 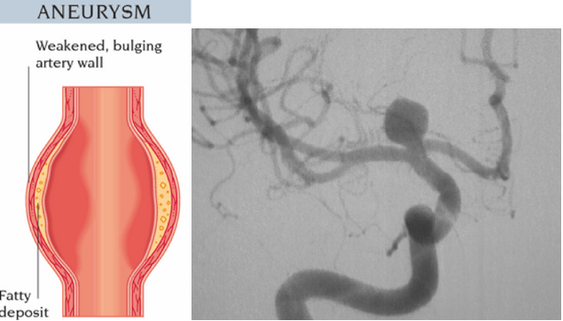 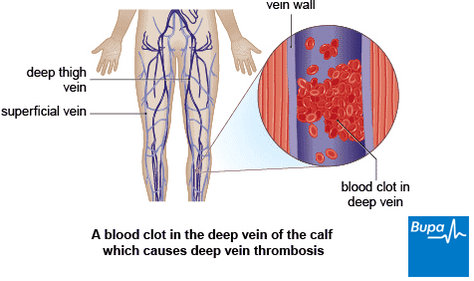 Skills
D.4.S 1 ​Measurement and interpretation of the heart rate under different conditions. 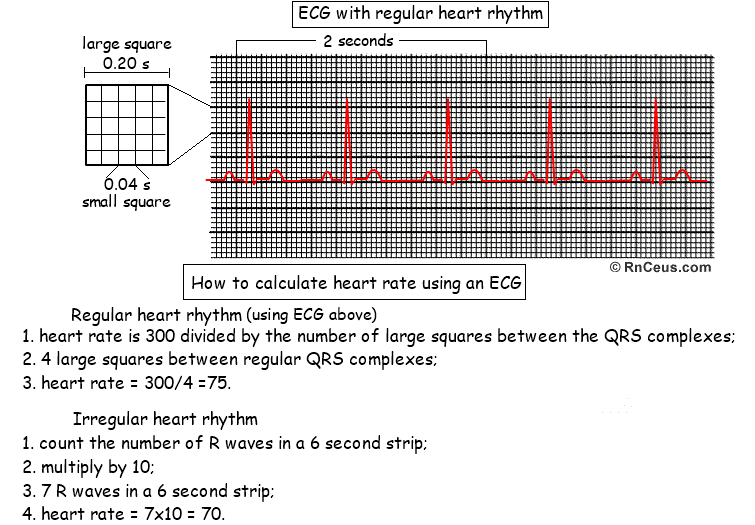 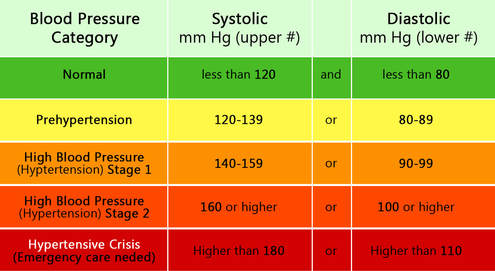 image from Kenya Neem Foundation
Blood Pressure Test
D.4 S 3 ​Mapping of the cardiac cycle to a normal ECG trace.
Cardiac muscle contracts because it receives electrical signals.  These signals can be detected by electrocardiogram (EKG)

image from BC Open Textbooks
Animation ECG
D.4 S 4 ​Analysis of epidemiological data relating to the incidence of coronary heart disease.
Coronary heart disease refers to the damage to the heart as a consequence of reduced blood supply to the tissues of the heart itself.  Often caused by narrowing and hardening of the coronary artery. Epidemiology is the study of the patterns, causes and effects of diseases in groups of individuals or populations.
​
Ethic groups can differ in their disposition of CHD because of differing diets and lifestyles.   Gender groups, age groups, groups that differ in level of physical activity can also differ. 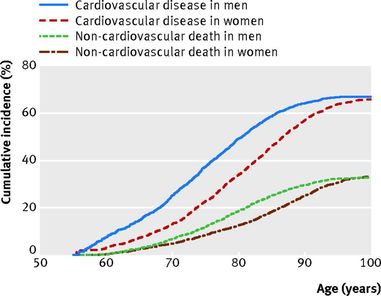 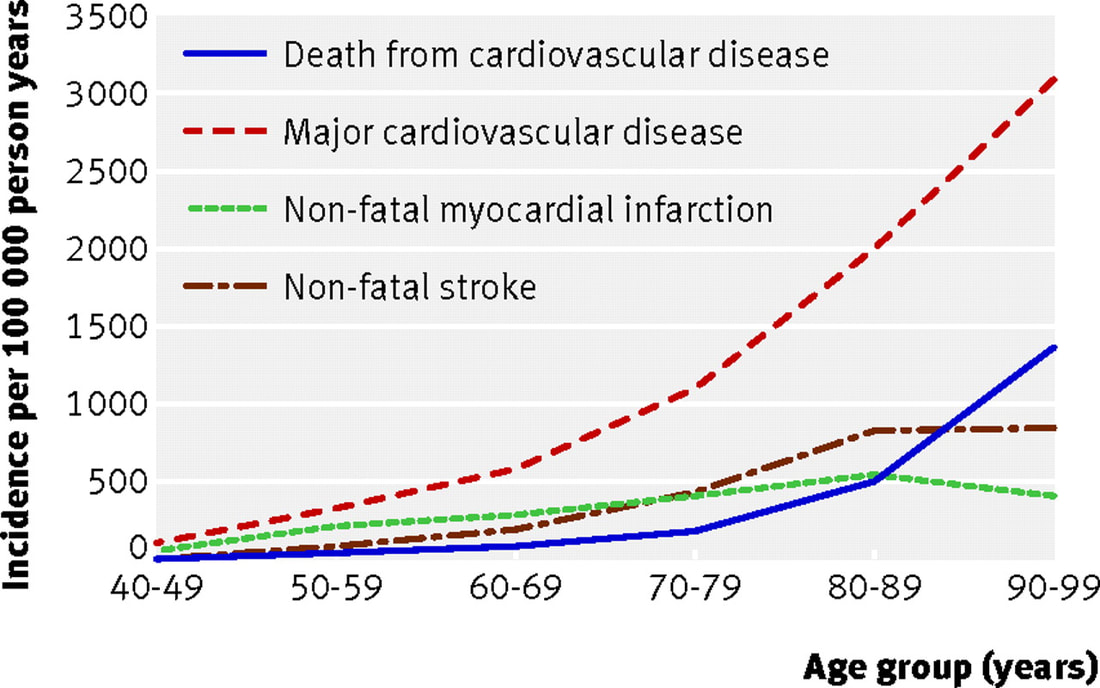 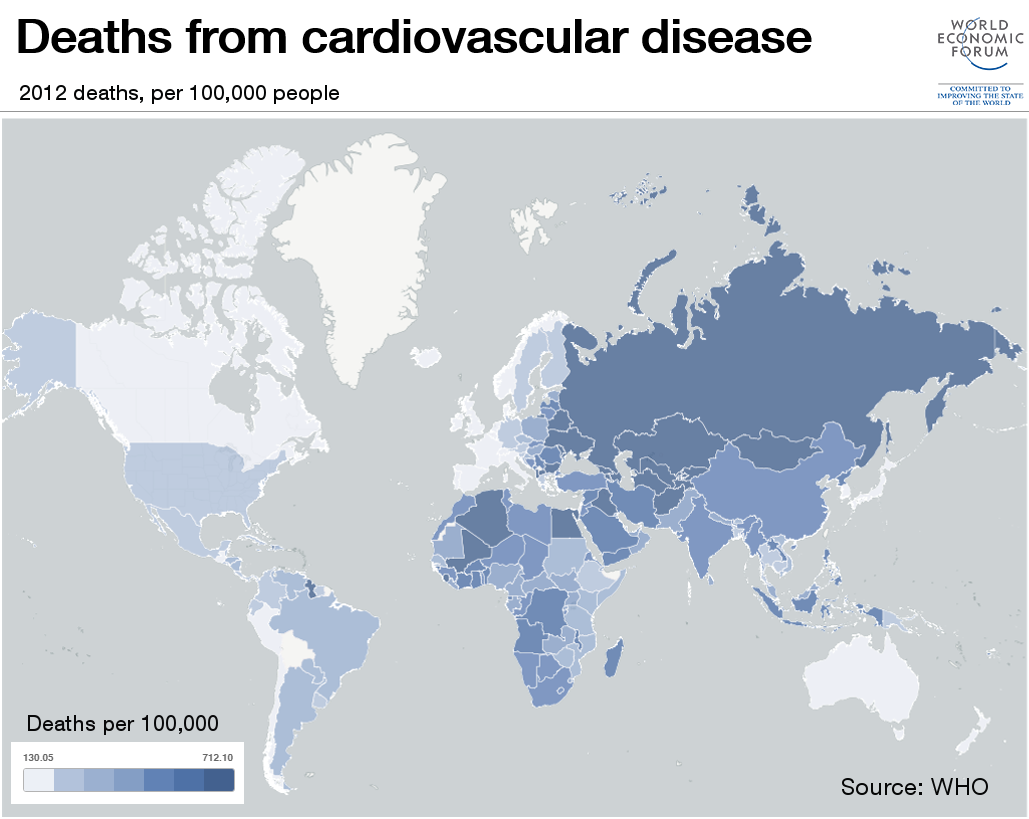 .Topic D.4 Review
​​​​Correct use of terminology is a key skill in Biology. It is essential to use key terms correctly when communicating your understanding, particularly in assessments. Use the quizlet flashcards or other tools such as learn, scatter, space race, speller and test to help you master the vocabulary.
Useful Links

​
TOK
​Video Clips
​In this medical animation we take a look at the heart and how it pushes oxygenated blood out to the body then returns to be re-oxygenated by the lungs and pushed out again.
​Electrical Conduction System of the Heart (cardiac conduction system): This video explains how the SA node, AV node, bundle of His, right and left bundle branch, and purkinje fibers allow the heart to contract which causes the PQRST wave you see on an EKG. ​(note the test questions are not IB questions)
Phases of the cardiac cycle.
The stethoscope is the single most widely used medical instrument in the world. But where did the idea come from? In the seventh installment of our ‘Moments of Vision’ series, Jessica Oreck shares the modest origins of this incredibly useful item.
A Brief animation about what a Defibrilator is and how it works
What is electrocardiography (ECG/EKG). ECG is a way to measure the electrical activity of the heart.
​AED's, or Automatic External Defibrillators increase the chance of survival of a heart attack victim by 90%.
This educative cartoon shows what any patient or family member should understand about cardiovascular disease, when confronted with a diagnosis of carotid artery stenosis, abdominal aneurysm or claudication.
Approximately seven million people around the world die from heart attacks every year. And cardiovascular disease, which causes heart attacks and other problems like strokes, is the world’s leading killer. So what causes a heart attack?
Reference sites