topic 2.6: structure of dna and rna 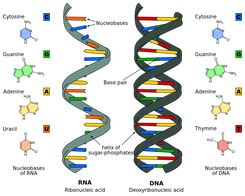 image from http://www.differencebetween.net/
In the DNA Structure unit students are learn to the structure of  DNA.  The structure of DNA molecule is vital for understanding the  replication and functioning of the molecule. 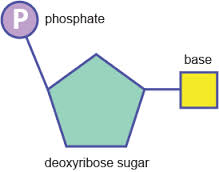 The base and phosphate are both linked together by covalent bonds to the pentose sugar.

The four different nucleotides can be linked together in any sequence because the phosphate and sugar used to link them are the same in every nucleotide. Any base sequence is possinle along a DNA or RNA molecule.

This is the key to nucleic acids acting as a store of genetic information. Base sequence = store of information. Sugar phosphate backbone = ensures that the store is stable and secure
DNA Structure Animation
2.6.U2 DNA differs from RNA in the number of strands present, the base composition and the type of pentose. (Oxford Biology Course Companion page 106).​
There are two types of nucleic acids present in cells – DNA and RNA

2.6.U3 DNA is a double helix made of two antiparallel strands of nucleotides linked by hydrogen bonding between complementary base pairs. (Oxford Biology Course Companion page 108).​
Nucleic acids are composed of nucleotide monomers which are linked into a single strand via condensation reactions

Each strand has a chain of nucleotides linked by covalent bonds, two strands are parallel but run in opposite directions so they are antiparallel. As the antiparallel chains lengthen, the atoms will organise themselves into the most stable energy configuration. This atomic arrangement results in the double-stranded DNA forming a double helix (~10 – 15 bases per twist)
​
The strands are held together by hydrogen bonds between the nitrogenous bases

This is called complementary base pairing – A and T complement each other by forming base pairs and same with G and C
Application:
2.6.A1 Crick and Watson’s elucidation of the structure of DNA using model making. (Oxford Biology Course Companion page 110).​
The structural organisation of the DNA molecule was correctly proposed in 1953 by James Watson and Francis Crick. These scientists constructed models to quickly visualise and assess the viability of potential structures. Their efforts were guided by an understanding of molecular distances and bond angles developed by Linus Pauling, and were based upon some key experimental discoveries:

The final construction of a correct DNA molecule owed heavily to the X-ray crystallography data generated by Rosalind Franklin. This data confirmed the arrangement of the DNA strands into a helical structure. The data was shared without Franklin’s knowledge or permission and contributed profoundly to the final design. Hence, Franklin is now recognised as a key contributor to the elucidation of DNA structure 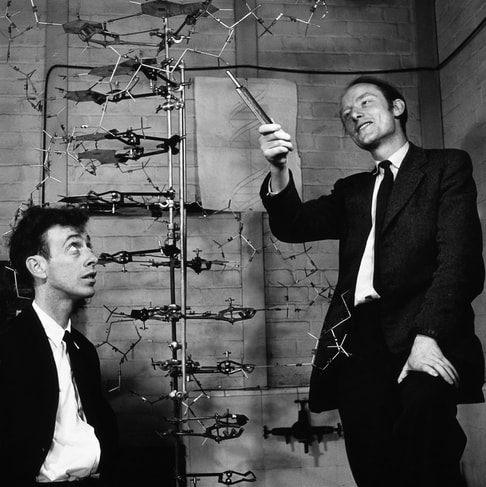 image from Data Physicalization
Watson and Crick Article
Skill
2.6.S1 Drawing simple diagrams of the structure of single nucleotides of DNA and RNA, using circles, pentagons and rectangles to represent phosphates, pentoses and bases. (Oxford Biology Course Companion page 107).​
​Both the phosphate group and nitrogenous base are attached to the central pentose sugar 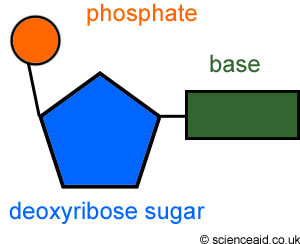 Topic 2.6 Review
Powerpoint and Notes on Topic 2.6 by Chris Payne
​​​​Correct use of terminology is a key skill in Biology. It is essential to use key terms correctly when communicating your understanding, particularly in assessments. Use the quizlet flashcards or other tools such as learn, scatter, space race, speller and test to help you master the vocabulary.

Counting All the DNA on Earth - New York Times, July 2015
DNA's dynamic nature makes it well-suited to serve as the blueprint of life - Science Daily, August 2016
TOK:
​Video Clips:
The Race for the DNA Model
The discovery of the structure of the DNA double helix was one of the most important of the 20th century. In this educational video, explore Watson and Crick’s quest to understand DNA’s structure, and Rosalind Franklin’s key insights via x-ray crystallography.
The discovery of the structure of DNA was one of the most important scientific achievements in human history. The now-famous double helix is almost synonymous with Watson and Crick, two of the scientists who won the Nobel prize for figuring it out. But there’s another name you may not know:
​An exploration of the structure of deoxyribonucleic acid, or DNA.
Biology textbooks are full of drawings of DNA, but none of those show what DNA actually looks like. Sure, they’re good models for understanding how DNA works, but inside of real cells, it’s a whole lot more interesting. Learn why we can’t look directly at DNA, and find out how DNA is actually packed inside cells.
Hank introduces us to that wondrous molecule deoxyribonucleic acid - also known as DNA - and explains how it replicates itself in our cells.
Paul Andersen describes the molecular structure of DNA. He describes the major parts of a nucleotide and explains how they are assembled into a nucleic acid. The nitrogenous base, deoxyribose sugar and phosphate group make up a single nucleotide. The 5' and 3' end of DNA is described. The importance of hydrogen bonds in the 3-dimensional shape is also included
Reference sites