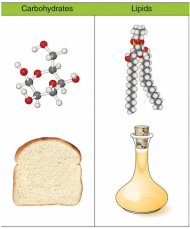 In the Basics of Biochemistry unit students are introduced to the major classes of biologically important molecules and the types of reactions  used to build and break apart those molecules.  The structure and  function of water, as the medium of life, is also a focus.

​The unit is  planned to take 2 school days.
Essential idea:
Nature of Science
Understandings:
2.3.U.1 Monosaccharide monomers are linked together by condensation reactions to form disaccharides and polysaccharide polymers.(Oxford Biology Course Companion page 74).​ 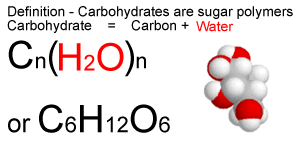 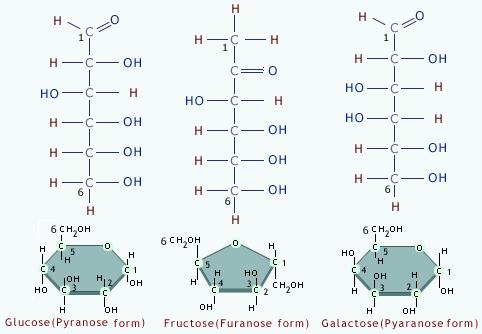 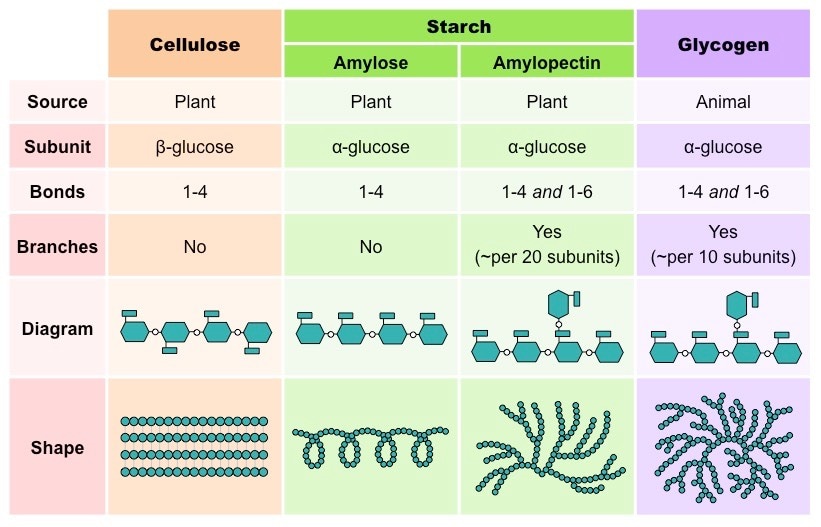 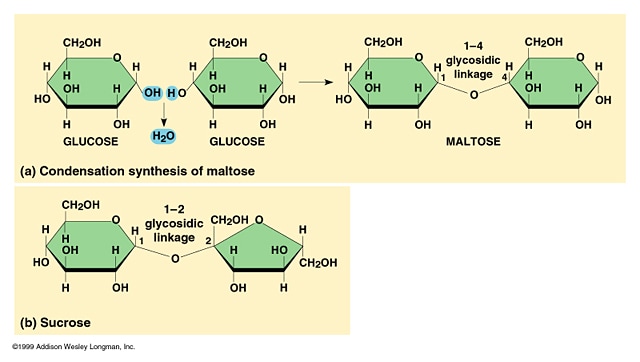 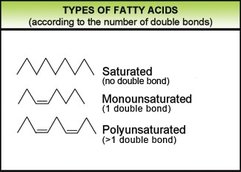 Fats are a group of chemical compounds that contain fatty acids. Energy is stored in the body mostly in the form of fat. Fat is also needed in the diet to supply essential fatty acids that are substances essential for growth but not produced by the body itself 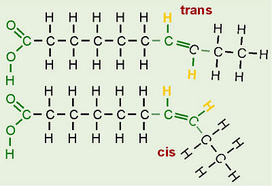 While a saturated fatty acid is a straight molecule on the average, the double bond in an unsaturated fatty acid produces a kink in the molecule. This is because a double bond cannot rotate. The bend in the carbon chain is much more pronounced in the cis isomer compared to the trans isomer. For this reason, cis fatty acids (and triacylglycerols made from them) do not solidify as readily as trans fatty acids. Due to the larger bend, the cis isomers cannot line up next to one another in as ordered a fashion as the trans isomers.

The configuration of the double bond in an unsaturated fatty acid can take two forms (or, to chemists, isomers): the naturally predominant cis form, in which both of the hydrogen atoms are on the same side of the chain; and the uncommon-in-nature trans isomer, in which the hydrogen atoms are on opposite sides. The trans form is (in most cases) best thought of as 'damaged'. 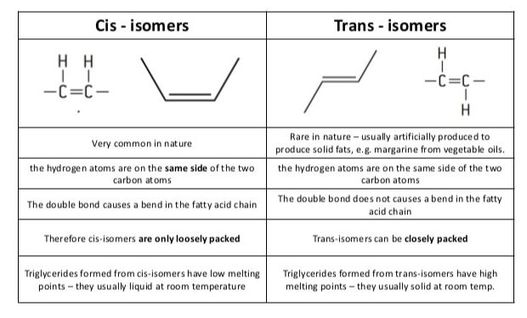 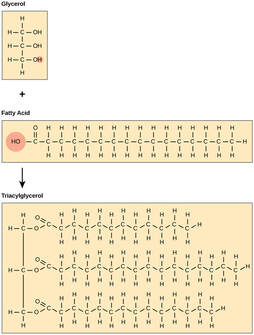 Applications
​ 2.3.A.1 Structure and function of cellulose and starch in plants and glycogen in humans. (Oxford Biology Course Companion page 76).​ 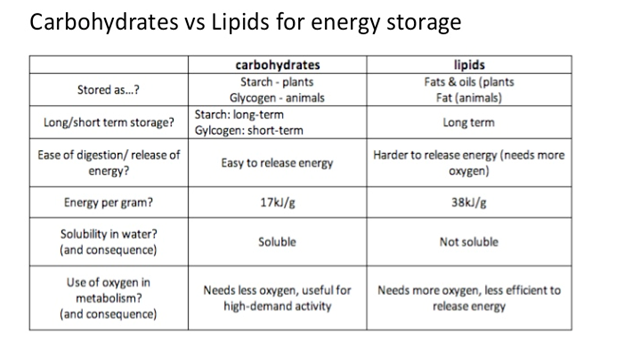 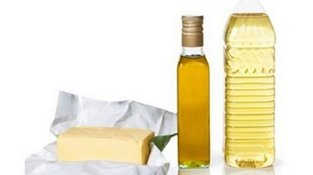 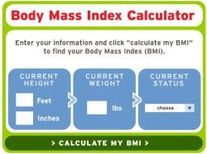 Hover over the picture to access the BMI Calculator
Body mass index, or BMI, is used to determine whether you are in a healthy weight range for your height.

It is useful consider BMI alongside waist circumference, as increases or decreases in weight outside the healthy range may increase your health risks.

​It gives you an idea of whether you’re underweight, a healthy weight, overweight, or obese for your height. BMI is one type of tool to help health professionals to assess risk for chronic disease. Another important tool is waist circumference. It is also important to understand your other risk factors.
Body Mass Index Nomogram 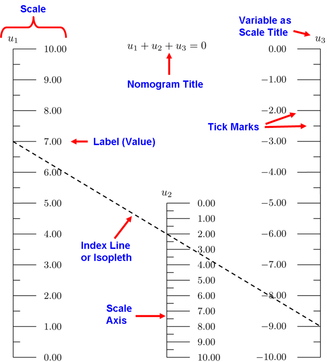 Dashed lines, representing the Body Mass Index, are displayed on the graph as calculated by the formula of weight (in kilograms) divided by height squared (in metres). 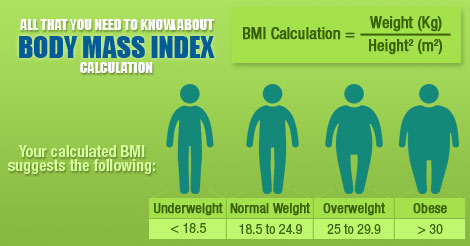 Topic 2.3 Kahoot Review Quiz
Powerpoint and Notes on Topic 2.3 from Chris Payne
​​Correct use of terminology is a key skill in Biology. It is essential to use key terms correctly when communicating your understanding, particularly in assessments. Use the quizlet flashcards or other tools such as learn, scatter, space race, speller and test to help you master the vocabulary.
Useful Links:

The Macromolecules of Life

Don't use body mass index to determine whether people are healthy - Science Daily, February 4, 2016
Does Putting On A Few Pounds Help You Cheat Death?​  - NPR, May 10, 2016
Higher BMI not associated with increased risk of heart attack or early death, twin study shows - Science Daily August 1, 2016
​F.D.A. sets 2018 deadline to rid foods of trans fats - New York Times, June 16, 2015
The Food Industry's Influence In Nutrition Research  - NPR, September 17, 2016
​International-mindedness:
TOK
​Video Clips:
​Paul Andersen begins by explaining the structure and purpose of carbohydrates. He describes and gives examples of monosaccharides, disaccharides, oligosaccharide and polysaccharides. He explains how they grow through dehydration reactions and shrink through hydrolysis
Paul Andersen describes the lipids (of the fats). He explains how they are an important source of energy but are also required to cell membranes. He explains how the hydrocarbon tails in triglycerides contain energy available for life. He also explains how phospholipids construct, and cholesterol molecules main the cell membrane.
As the narrative goes, fat is bad. Well, it's actually more nuanced than that. The type of fat you eat is more impactful on your health than the quantity. George Zaidan examines triglycerides, the varied molecules that make up fat, and how to identify which types of fat you are consuming.
The body mass index, better known as BMI, is a measure of obesity that has been in use for over 200 years. It was a formula created by Belgian mathematician Adolphe Quetelet. It takes your weight in kilograms divides and divides it by height in meters squared.
John Oliver discusses how and why media outlets so often report untrue or incomplete information as science.
Reference sites