image from www.igbp.net
Air pollution is the introduction of particulates, biological materials, or other harmful materials into the Earth's atmosphere, possibly causing disease, death to humans, damage to other living organisms such as food crops, or the natural or built environment.
It is estimated that more than 1 billion people are exposed to outdoor air pollution annually. Urban air pollution is linked to up to 1 million premature deaths and 1 million pre-native deaths each year. Urban air pollution is estimated to cost approximately 2% of GDP in developed countries and 5% in developing countries. Rapid urbanisation has resulted in increasing urban air pollution in major cities, especially in developing countries. Over 90% of air pollution in cities in these countries is attributed to vehicle emissions brought about by high number of older vehicles coupled with poor vehicle maintenance, inadequate infrastructure and low fuel quality.

In this unit we will look at the factors involved in the formation of urban air pollution and strategies to control air pollution.

​This unit is a minimum of 3 hours.
Significant Ideas
Big questions:
Knowledge and Understanding
6.3.U1 Primary pollutants from the combustion of fossil fuels include carbon monoxide, carbon dioxide, black carbon or soot, unburned hydrocarbons, oxides of nitrogen, and oxides of sulfur.
​[The use of chemical symbols, formulae or equations is not required.​] 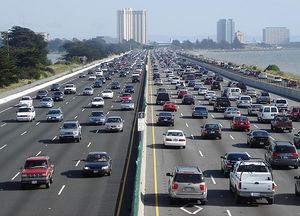 image from Energy Education
When fossil fuels are burned, two of the pollutants emitted are hydrocarbons (from unburned fuel) and nitrogen monoxide (nitric oxide, NO). Nitrogen monoxide reacts with oxygen to form nitrogen dioxide (NO2), a brown gas that contributes to urban haze. Nitrogen dioxide can also absorb sunlight and break up to release oxygen atoms that combine with oxygen in the air to form ozone.

All these will mean the burning of fossil fuels and release of nitrogen monoxide which then through some process from ozone
Ozone is a toxic gas and an oxidizing agent. It damages crops and forests, irritates eyes, can cause breathing difficulties in humans and may increase susceptibility to infection. It is highly reactive and can attack fabrics and rubber materials

​Smog is a mix of primary and secondary pollutants. Tropospheric ozone is the main pollutant 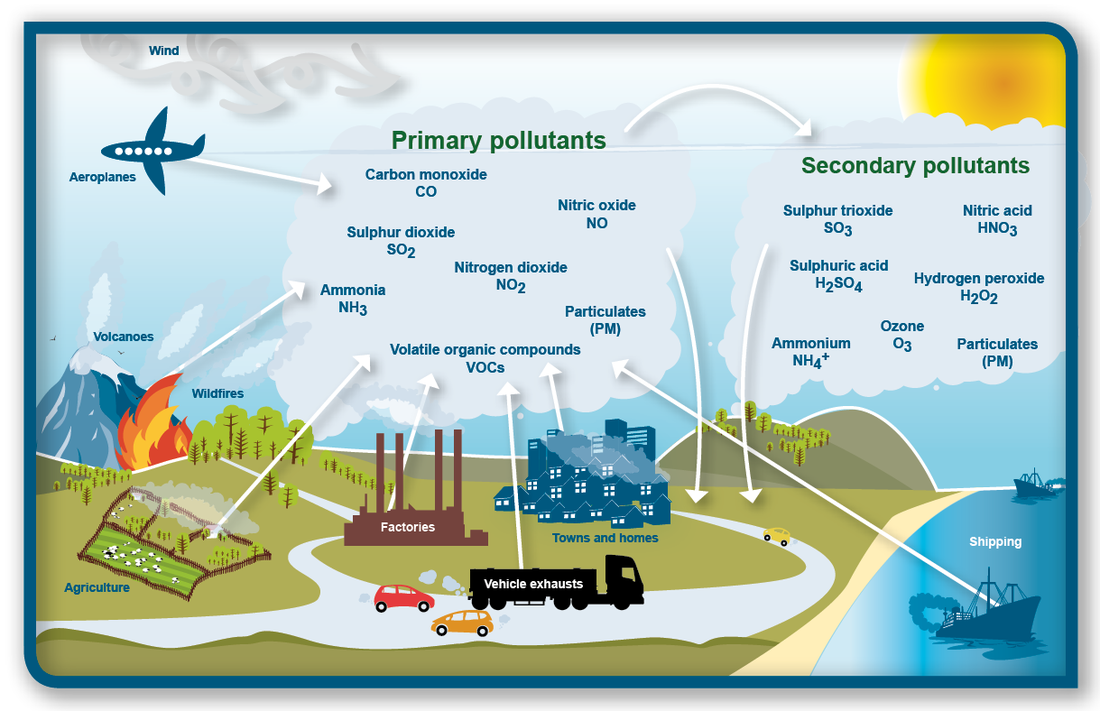 6.3.U3 Tropospheric ozone is an example of a secondary pollutant, formed when oxygen molecules react with oxygen atoms that are released from nitrogen dioxide in the presence of sunlight.

image from apollo.eas.gatech.edu
Ozone occurs naturally at ground-level in low concentrations. The two major sources of natural ground-level ozone are hydrocarbons, which are released by plants and soil, and small amounts of stratospheric ozone, which occasionally migrate down to the earth's surface. Neither of these sources contributes enough ozone to be considered a threat to the health of humans or the environment.

The ozone that is a byproduct of certain human activities becomes a problem at ground level. With increasing populations, more automobiles, and more industry, there's more ozone in the lower atmosphere. Since 1900 the amount of ozone near the earth's surface has more than doubled. Unlike most other air pollutants, ozone is not directly emitted from any one source. Tropospheric ozone is formed by the interaction of sunlight, particularly ultraviolet light, with hydrocarbons and nitrogen oxides, which are emitted by automobiles, gasoline vapors, fossil fuel power plants, refineries, and certain other industries. 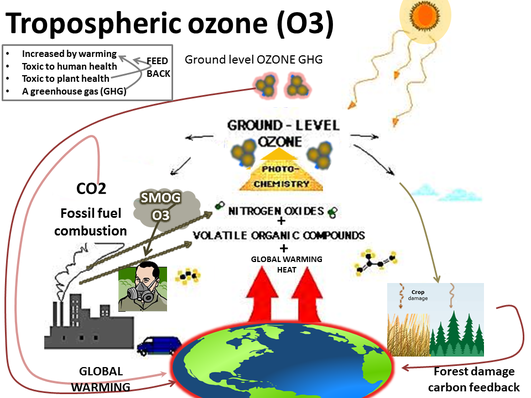 image from capita.wustl.edu
Ozone affects plants in several ways. High concentrations of ozone cause plants to close their stomata. These are the cells on the underside of the plant that allow carbon dioxide and water to diffuse into the plant tissue. This slows down photosynthesis and plant growth. Ozone may also enter the plants through the stomata and directly damage internal cells.

Rubber, textile dyes, fibers, and certain paints may be weakened or damaged by exposure to ozone. Some elastic materials can become brittle and crack, while paints and fabric dyes may fade more quickly.

When ozone pollution reaches high levels, pollution alerts are issued urging people with respiratory problems to take extra precautions or to remain indoors. Smog can damage respiratory tissues through inhalation. Ozone has been linked to tissue decay, the promotion of scar tissue formation, and cell damage by oxidation. It can impair an athlete's performance, create more frequent attacks for individuals with asthma, cause eye irritation, chest pain, coughing, nausea, headaches and chest congestion and discomfort. It can worsen heart disease, bronchitis, and emphysema.
6.3.U5 The frequency and severity of smog in an area depends on local topography, climate, population density, and fossil fuel use. 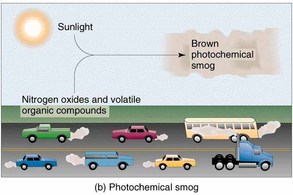 Photochemical smog is a mixture of about one hundred primary and secondary pollutants formed under the influence of sunlight. Ozone is the main pollutant. The frequency and severity of photochemical smogs in an area depend on: 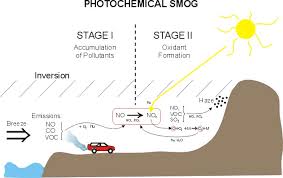 image from www.ems.psu.edu
Photochemical Smog Formation Animation
6.3.U6 Thermal inversions occur due to a lack of air movement when a layer of dense, cool air is trapped beneath a layer of less dense, warm air. This causes concentrations of air pollutants to build up near the ground instead of being dissipated by “normal” air movements.
Temperature inversions occur when cold air is trapped under warm air. Cold air does not move or sinks in from surrounding hills. ​

image from apesnature.homestead.com
6.3.U7 Deforestation and burning may also contribute to smog

image from Common Dreams
The primary way trees are burned is by slash-and-burn agriculture. The trees are cut down and then burned to clear the land for farming. Biomass from other biomes, like savannah, is also burned to clear farmland. The pollutants are much the same as from burning fossil fuels: CO2, carbon monoxide, methane, particulates, nitrous oxide, hydrocarbons, and organic and elemental carbon.

​Burning forests increase greenhouse gases in the atmosphere by releasing the CO2 stored in the biomass and also by removing the forest so that it cannot store CO2 in the future. As with all forms of air pollution, the smoke from biomass burning often spreads far and pollutants can plague neighboring states or countries.

Smog caused by the fires has generated headlines and a diplomatic flare-up between Indonesia and its neighbors in southeast Asia. It’s a threat to human health and has disrupted flights in the region. At the same time, burning trees and peatlands are pumping heat-trapping gases into the atmosphere 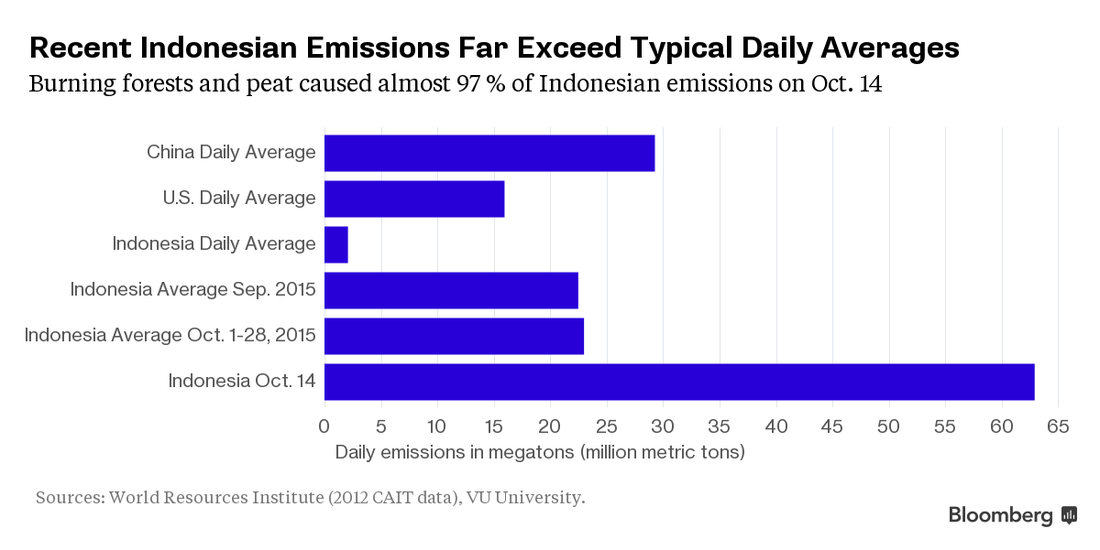 6.3.U8 Economic losses caused by urban air pollution can be significant. 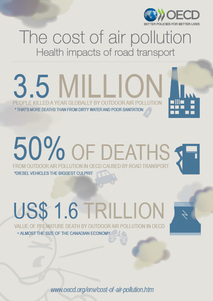 Poor air quality is one of the most serious environmental problems in urban areas around the world, especially in developing countries.  Adverse health effects from short and long term exposure to air pollution range from premature deaths caused by heart and lung disease to worsening of asthmatic conditions and can lead to reduced quality of life and increased costs of hospital admissions.

In Mexico City, such economic damages due to air pollution are estimated at $1.5 billion per year. In Jakarta, 14,000 deaths, about 2 per cent of annual deaths, in the cities could be avoided every year if particulate could be kept at the level recommended by the WHO. The researchers asserted that the health effects of air pollution are massive. It causes huge economic losses in terms of loss of current workforce, treatment cost, employment loss and so on. (New Age, January 1, 2004)

Air pollution also reduces food production and timber harvests, because high levels of pollution impair photosynthesis. In Germany, for example, about US$4.7 billion a year in agricultural production is lost to high levels of sulphur, nitrogen oxides, and ozone.

The World Health Organisation estimates that about 700,000 deaths annually could be prevented in developing countries if three major atmospheric pollutants - carbon monoxide, suspended particulate matter, and lead - were brought down to safer levels. The direct health cost of urban air pollution in developing countries was estimated in 1995 at nearly US$100 billion a year. Chronic bronchitis along accounted for around US$40 billion). 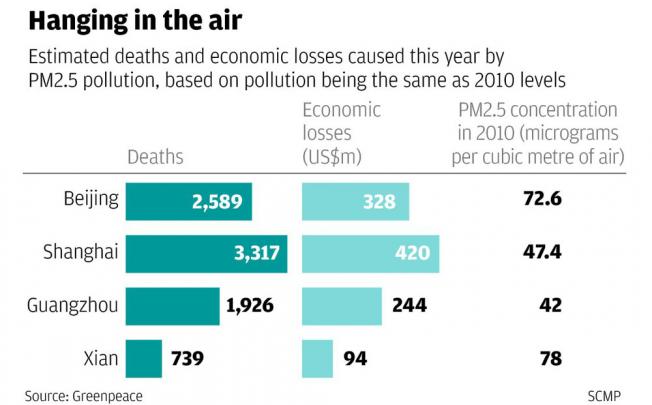 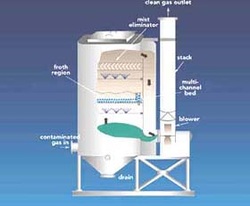 image from www.mech.hku.hk
Measures to reduce fossil fuel combustion should be considered, for example, reducing demand for electricity and private cars and switching to renewable energy. Refer to clean‑up measures, for example, catalytic converters.

Cause
Release and transfer
Effects
Things to consider in evaluation:

Case Studies
On a Clear Day You Can See Forever
New Delhi
China
Mexico City
​Asian Brown Haze
Powerpoint and Notes Adapted from Brad Kremer and Masfar
​​​​​​Correct use of terminology is a key skill in ESS. It is essential to use key terms correctly when communicating your understanding, particularly in assessments. Use the quizlet flashcards or other tools such as learn, scatter, space race, speller and test to help you master the vocabulary.
Useful Links

International-mindedness:
TOK
Video Clips
On July 26, 1943, Los Angeles was blanketed by a thick gas that stung people’s eyes and blocked out the Sun. Panicked residents believed their city had been attacked using chemical warfare. But the cloud wasn’t an act of war. It was smog. So what is this thick gray haze actually made of? And why does it affect some cities and not others?
In this video Paul Andersen explains how air pollution is any chemicals in the atmosphere that negatively affect human health. Primary pollutants (like CO, VOCs, NOx, SO2, PM, and Lead) as well as secondary pollutants (like Ozone, nitric acid, and sulfuric acid) are included. Regulation of air pollution and technology can mediate the health threat.
Timelapse Coal Fired Power Plant from Jeff Grewe on Vimeo.
A segment on how air pollution affects urban populations. Produced by the Science & Medical Journalism Program at UNC-Chapel Hill.
Asia's dramatic economic growth in recent years has come with environmental costs that can take a heavy toll on people's health. While air pollution from busy factories and congested highways are part of the problem, there are also concerns about air quality in rural areas.
The air pollution in Mexico City is a serious problem that is shown in this short video.
As Beijing residents are told to limit time outside because of pollution, some of the 10 million residents in Shinjiazhuang, China's most polluted city, who are forced to wear masks every day, are starting to fight back
Air pollution is a global pandemic that's underway. It's a major health challenge yet nobody talks about it. It affects everyone but we usually ignore it cause we can't actually "see" it. Now it's time to talk about it and find a way to solve it together.
Air pollution effects everyone and TXU Energy is proud to partner with environmental organizations like the North Texas Clean Air Coalition.