AMAZING WORLD OF SCIENCE WITH MR. GREEN
image from mappingignorance.org 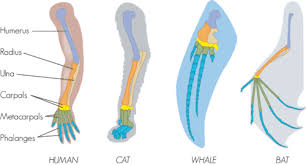 ​In the Evidence for Evolution unit we look at look at how time and many generations change the genetic make-up of species as they become adapted to new surroundings or altered conditions. One result of these changes may be the evolution of new varieties and species.

​The unit is planned to take 2 school days.
​Essential idea:
​Nature of science:
Understandings:
5.1.U1 ​Evolution occurs when heritable characteristics of a species change. (Oxford Biology Course Companion page 242).
Evolution at its most fundamental level simply describes a change over time. In living organisms this change refers to the heritable characteristics of a species (biological evolution)

A fossil is the preserved remains or traces of any organism from the remote past. The preserved remains (body fossils) provide direct evidence of ancestral forms and include bones, teeth, shells, leaves, etc. Traces provide indirect evidence of ancestral forms and include footprints, tooth marks, burrows and faeces (coprolite). The totality of fossils, both discovered and undiscovered, is referred to as the fossil record. The fossil record shows that over time changes have occurred in the features of living organisms (evolution) 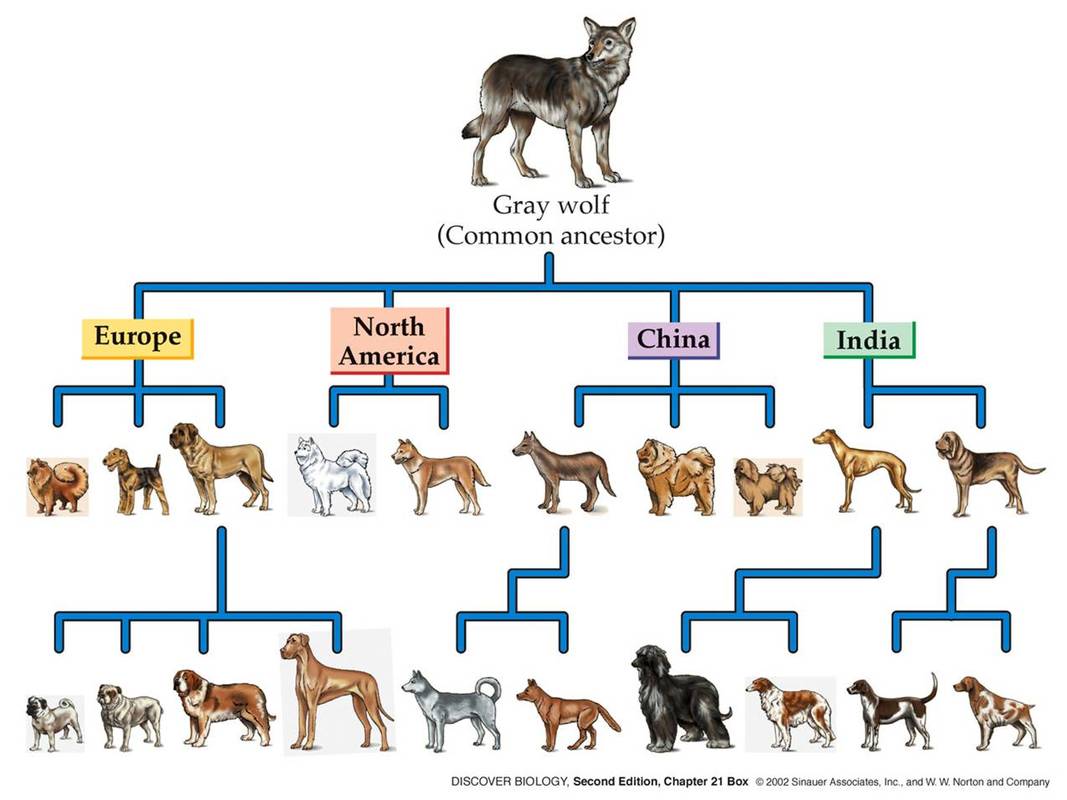 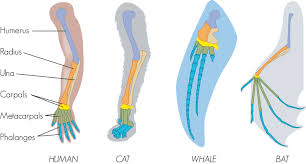 image from ck12
All species start out as single celled organisms. Many species develop into much larger, more complex organisms after conception. If we compare the embryos of animals as they develop, we often find they are much more similar than their fully developed counterparts. Many of the anatomical differences between species only arise during our embryonic development. Different species often start with the same basic tissues or structures but they develop differently and are re-purposed into different structures as the organism develops. The more closely two species are related the later in development these differences usually emerge. 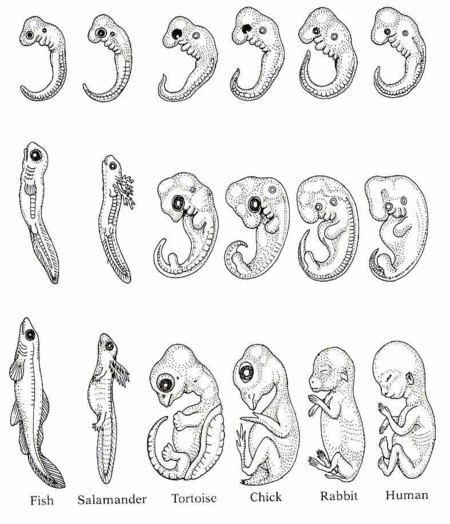 image from Rational Conclusions
5.1.U5 ​Populations of a species can gradually diverge into separate species by evolution. (Oxford Biology Course Companion page 244)
​Within a population of any given species there will be genetic variation (i.e. variation which is inheritable). Typically this variation will be continuous and follow a normal distribution curve as the rate of change is gradual and cumulative
​ 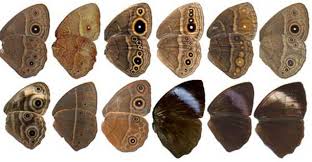 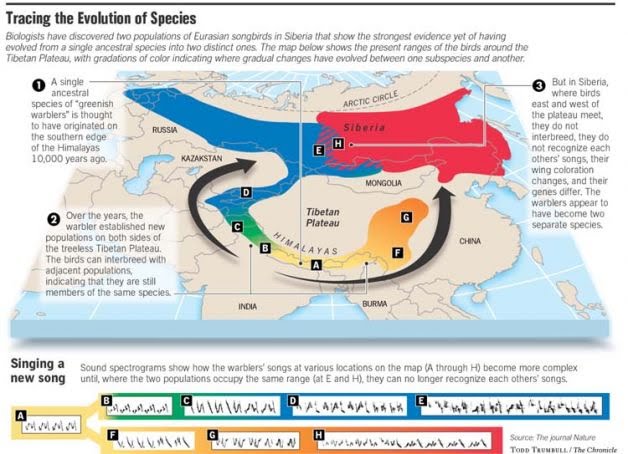 5.1.U6 ​Continuous variation across the geographical range of related populations matches the concept of gradual divergence.  (Oxford Biology Course Companion page 247)
The degree of divergence between geographically separated populations will gradually increase the longer they are separated. As the genetic divergence between the related populations increase, their genetic compatibility consequently decreases. Eventually, the two populations will diverge to an extent where they can no longer interbreed if returned to a shared environment. This process is called speciation
​​​
​Biogeography is the study of species distributions. It examines how species have been distributed across different places at different times. The distribution of species shows a very clear pattern. More similar species tend to be found closer to one another geographically. The distribution of many animals and plants across different continents can be explained by continental drift (the movement tectonic plates).

The continents were once all joined together in one giant super-continent. About 200-180 million years ago the southern half called Gondwanaland broke away. This would later split into what we now know as Antarctica, Africa, Australia, South America and India. 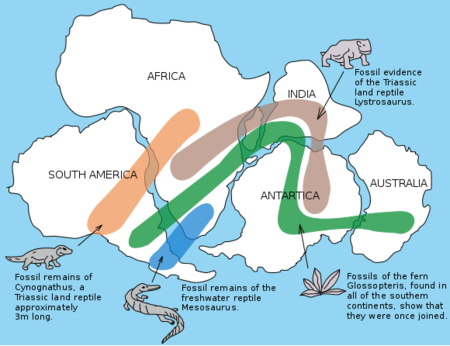 Application
5.1.A1 ​Development of melanistic insects in polluted areas. (Oxford Biology Course Companion page 247)​
Peppered moths (Biston betularia) exist in two distinct polymorphic forms – a light colouration and a darker melanic variant
In pre-industrial revolution tree trunks in forests around major cities were light grayish-green due to presence of lichens. Most peppered moths in area are light colored with dark spots. Prior to 1850, no dark (melanic) form of moth was ever collected.

In post industrial revolution tree trunks in forests become dark due to covering with soot. (i.e. coal-based industries). After 1850, dark form of peppered moth were collected. Over the next 45 years, dark forms of moth became more common.

Melanic form of moth accounts for 95% of peppered moth population around many industrial cities in England. The mottled form accounts for largest percentage of population in non-industrial areas. This evidence shows that both formes of the peppered moth existed in the population. Brds prey upon both forms of moth when resting on tree trunks. The increase of one form over the other form (e.g. dark over light) due to bird predation (i.e. selective pressure) is an example of natural selection. Increased prevalence of melanic form of peppered moth during the Industrial Revolution is an example of a directional selection following a change in environmental conditions. 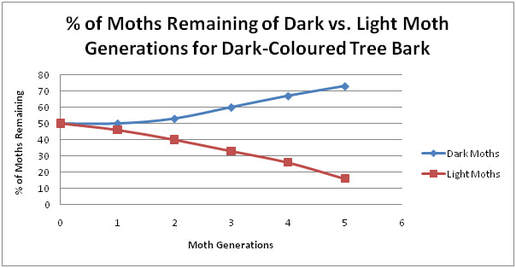 Do the peppered moth simulation
http://biologycorner.com/worksheets/pepperedmoth.html
5.1.A2 ​Comparison of the pentadactyl limb of mammals, birds, amphibians and reptiles with different methods of locomotion. (Oxford Biology Course Companion page 245)
​
Comparative anatomy of groups of organisms may show certain structural features that are similar, implying common ancestry. Anatomical features that are similar in basic structure despite being used in different ways are called homologous structures. The more similar the homologous structures between two species are, the more closely related they are likely to be

Evolution: Constant Change and Common Threads video series on Fossils
Evolutionary Biology What is A Species Reading
Scientific America article Origins of Life .
What Evolution Is Not article
Chickens of Kuai article

PowerPoint and Study Guide on Topic 5.1 by Chris Payne
Correct use of terminology is a key skill in Biology. It is essential to use key terms correctly when communicating your understanding, particularly in assessments. Use the quizlet flashcards or other tools such as learn, scatter, space race, speller and test to help you master the vocabulary.
Helpful Links:

Scientists Discover Cosmic Factory for Making Building Blocks of Life (2013-09-15)
"Just a Theory": 7 Misused Science Words (2013-04-02)Class Material
What evolved first—a dexterous hand or an agile foot? from Phys.org
Octopuses Edit Their Genetic Code Like No Other Animal - Discover Magazine 7 April 2017
TOK
Brian Hare tells us the story of Dmitri Belyaev, a geneticist and clandestine Darwinian who lived in Stalinist Russia and studied the domestication of the silver fox.
Video Clips
Biologists teach that all living things on Earth are related. Is there any solid evidence to back this claim? Join us as we explore the facts! We start with a close look at the origin of whales from land mammals, and then touch on the origins of several other critters, including our own species
Professor Neil Shubin talks about the discovery of Tiktaalik and one of the greatest evolutionary events in Earth's history: when the very first fish ventured out onto land. Widely known as the "fishapod", Tiktaalik roseae is a 375 million year old fossil fish discovered by a team of six palaeontologists in the Canadian Arctic in 2004. ​
Learn things about a 200 million year old branch of life that would blow my mind. Get ready to meet the chillest reptile, weird living fossil, and star of Turtles All The Way Down… the tuatara
Though stickleback fish once lived in the ocean, some populations now thrive in freshwater environments. This change resulted in drastic physical transformations. Explore topics in gene expression and adaptation in this fascinating short film.
Hank gets real with us in a discussion of evolution - it's a thing, not a debate. Gene distribution changes over time, across successive generations, to give rise to diversity at every level of biological organization.
​Paul Andersen discusses scientific evidence of the origin of life on our planet.  He begins with a brief discussion of the age of the earth and ends with the future of humanity.  He includes geologic, chemical and molecular data.
Darwin's theory of biological evolution helps us understand how simple life forms can give rise to complex lifeforms, but how did the first reproducing creatures come about? The origin of life needs its own explanation.
​"What Darwin Never Knew" offers answers to riddles that Darwin couldn't explain. Breakthroughs in a brand-new science—nicknamed "evo devo"—are linking the enigmas of evolution to another of nature's great mysteries, the development of the embryo. NOVA takes viewers on a journey from the Galapagos Islands to the Arctic, and from the explosion of animal forms half a billion years ago to the research labs of today.
Marcelo Gleiser is a world-renowned theoretical physicist and award-winning writer and educator.
​With a solid understanding of biology on the small scale under our belts, it's time for the long view - for the next twelve weeks, we'll be learning how the living things that we've studied interact with and influence each other and their environments. Life is powerful, and in order to understand how living systems work, you first have to understand how they originated, developed and diversified over the past 4.5 billion years of Earth's history. Hang on to your hats as Hank tells us the epic drama that is the history of life on Earth.
In a single year, there are 200-300 million cases of malaria and 50-100 million cases of dengue fever worldwide. So: Why haven't we found a way to effectively kill mosquitoes yet? Hadyn Parry presents a fascinating solution: genetically engineering male mosquitoes to make them sterile, and releasing the insects into the wild, to cut down on disease-carrying species.
In the 1950s, Belyaev and his team spent years breeding the silver fox (Vulpes vulpes) and selecting only those that showed the least fear of humans.
Learn the process of selective breeding and see examples of the process on a farm.
There is a dizzying diversity of species on our planet. From genetic evidence we know that all of those species evolved from a single ancient ancestor. But how does one species split in to many? Through the evolutionary process of speciation — which begins when populations become isolated by changes in geography or by shifts in behavior so that they no longer interbreed.
Explore speciation with The Amoeba Sisters. This video discusses sympatric and allopatric speciation and covers several types of isolation types including behavioral, temporal, and habitat isolations
Reference sites