​Topic 9.2: Transport in the Phloem of Plants

​The phloem is composed of living tissue called sieve tube members (lack a nucleus) that are joined end to end to form a tube that conducts food materials throughout the plant. They are bordered by companion cells that carry out the cellular functions of a sieve-tube element. Phloem tubes can carry sugars and amino acids in a variety of directions; depending on where the source and the sinks are located (sometimes roots can be sources or sinks).

Sources produce sugars by photosynthesis in leaves or green stems or by hydrolysis of starch in storage vessels (germinating seeds or roots/tubers) and deliver these products via the phloem to the sink (roots, buds, stem, seeds, and fruits). At the source, sugar and other organic molecules are loaded into the sieve tube members thus increasing solute concentration within the sieve tube cells (decreases water potential).

Water from surrounding tissues, enters the sieve tube members by osmosis following a concentration gradient.. The water absorbed into the sieve tube creates hydrostatic pressure that forces the phloem sap to flow (bulk flow) towards the sink. 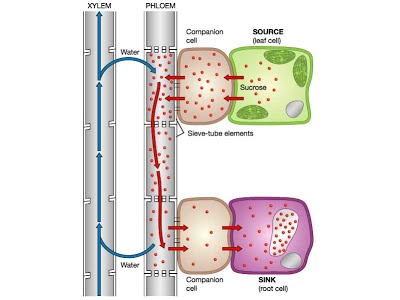 image from plant cell biology
9.2 U 2 ​Incompressibility of water allows transport along hydrostatic pressure gradients.
At normal temperature, the compressibility of water is so low that it can be considered incompressible. Any change in pressure at one end of the transport vessel will result in an equal change in pressure at the other end of the transport vessel. This allows phloem sap to move up or down, with or against gravity, as it moves from source to sink.

Build-up of sucrose and solutes, causes water to enter the companion cells through osmosis. The incompressibility of water and ridged cell walls causes a build-up of pressure. Water flows from high pressure to low pressure
Sucrose is used as an energy source at the sink for growth or converted to starch for storage, reducing the amount of sucrose and thus reducing osmotic pressure. Water that carried the solute is drawn back into the xylem 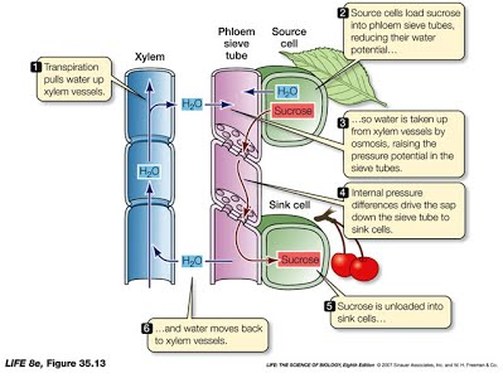 9.2 U 3 ​Active transport is used to load organic compounds into phloem sieve tubes at the source
​Organic compounds produced at the source are actively loaded into phloem sieve tubes by companion cells. Sugars are actively unloaded at the sink and water returns into the xylem tubes reinforcing the pressure gradient from the source to the sink. Water is recycled by the xylem, returning it from the sink back to the source.
At the source sugars are loaded through active transport in a process called phloem loading

In some plants sugars travel through cell walls from mesophyll cells to cell walls of companion cells and some sieve cells. Sugar is then actively transported into the phloem by a sucrose transport protein  (Apoplast Pathway). Protons are pumped out of the companion cells from the tissues by active transport, using ATP as an energy source. This creates a proton gradient. H+ binds with sucrose and flows back into the companion cell-sieve tube complex through a co-transport protein, following its concentration gradient, and pulling sucrose molecule with it into the cell.

In other plants, sucrose can travel between cells through connections called plasmodesmata (symplast route). Once the sucrose reaches the companion cell, it is converted to an oligosaccharide, which maintains the sucrose concentration gradient

image from IB Study Buddy
9.2 U 4 ​High concentrations of solutes in the phloem at the source lead to water uptake by osmosis
The active transport of solutes (such as sucrose) into the phloem by companion cells makes the sap solution hypertonic. Loading of sucrose into the STMs at the source. Reduces the water potential inside STMs, causing water to enter by osmosis 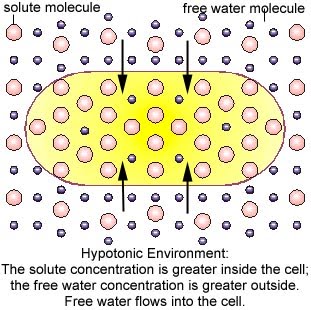 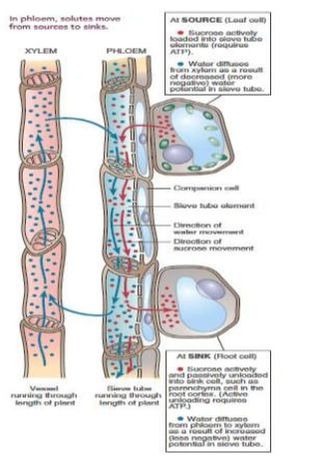 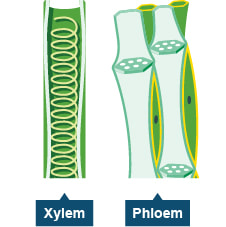 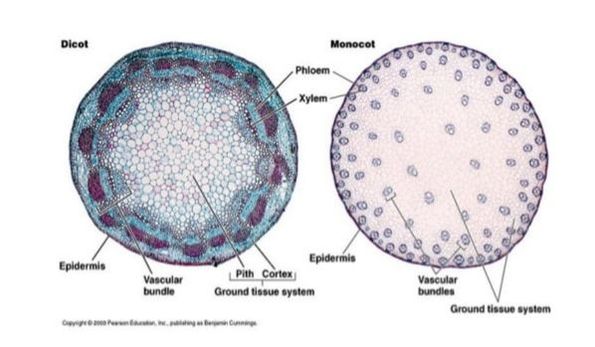 9.2 S 2 Analysis of data from experiments measuring phloem transport rates using aphid stylets and radioactively-labelled carbon dioxide.
Radioactively labeled carbon-14 contained within CO2 can be fixed by plants by photosynthesis . The carbon in these sugars created by photosynthesis, is metabolized by the plant and will be found in different molecules within the plant. This carbon can be detected using film or radiation detectors. Therefore the movement, use, and formation of these molecules can be traced

Aphid uses stylet to tap into phloem. The aphid body cut from stylet after stylet inserted into phloem. The phloem sap continues flowing through stylet. Analyse sap from solutes/carbohydrates. Plants are grown in radioactive CO2 which becomes incorporated into carbohydrates produced by plant. Radioactive-labeled carbon can be detected in the phloem sap. Stylets placed at different parts of the plant can show rate of movement of phloem sap. 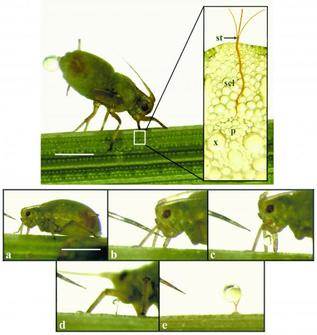 ​Topic 9.2 Review
​​PowerPoint and Notes on Topic 9.2 by Chris Payne
​​​Correct use of terminology is a key skill in Biology. It is essential to use key terms correctly when communicating your understanding, particularly in assessments. Use the quizlet flashcards or other tools such as learn, scatter, space race, speller and test to help you master the vocabulary.
Useful Links

Researcher affirms 86-year-old hypothesis - Science Daily, June 6, 2016
Protein restricts sap uptake by aphids - Science Daily, October 10, 2017
Video Clips
Paul Andersen explains how nutrients and water are transported in plants.  He begins with a brief discussion of what nutrients are required by plants and where they get them.  He shows you dermal, vascular and ground tissue in monocot and dicot roots, stems and leaves.  He then explains how water is pulled up a tree in xylem and how sugar is pushed in a plant through phloem.
This animation covers plant transport, demonstrating how water travels through the plant, and how sugars are distributed around the plant.
​This video explains the pressure flow hypothesis, an explanation for how sugars are transported through the vascular tissue of a plant.
​This short film introduces aphids as ectoparasites that feed on the sugar rich phloem of plants.
Reference sites