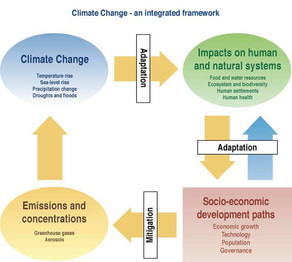 image from https://grimstad.uia.no/puls/climatechange2/nni04/16nni04.htm
Climate change is one of the most complex issues facing us today. It involves many dimensions – science, economics, society, politics and moral and ethical questions – and is a global problem, felt on local scales, that will be around for decades and centuries to come. Carbon dioxide, the heat-trapping greenhouse gas that has driven recent global warming, lingers in the atmosphere for hundreds of years, and the planet (especially the oceans) takes a while to respond to warming. So even if we stopped emitting all greenhouse gases today, global warming and climate change will continue to affect future generations. In this way, humanity is “committed” to some level of climate change.
​
This unit is 3.5 hours.
Significant ideas:
Big questions:
Knowledge and Understanding:
7.3.U1 Mitigation involves reduction and/or stabilization of GHG emissions and their removal from the atmosphere
[Mitigation is the use of technology and substitution to reduce resource inputs and emissions per unit of output.]
Because we are already committed to some level of climate change, responding to climate change involves a two-pronged approach:

Reducing emissions of and stabilizing the levels of heat-trapping greenhouse gases in the atmosphere (“mitigation”);
Adapting to the climate change already in the pipeline (“adaptation”).

​Mitigation – reducing climate change – involves reducing the flow of heat-trapping greenhouse gases into the atmosphere, either by reducing sources of these gases (for example, the burning of fossil fuels for electricity, heat or transport) or enhancing the “sinks” that accumulate and store these gases (such as the oceans, forests and soil). The goal of mitigation is to avoid significant human interference with the climate system,
​
Adaptation – adapting to life in a changing climate – involves adjusting to actual or expected future climate. The goal is to reduce our vulnerability to the harmful effects of climate change (like sea-level encroachment, more intense extreme weather events or food insecurity).
7.3.U2 Mitigation strategies to reduce GHGs in general may include:
[CCS is carried out by carbon dioxide being compressed, transported and stored permanently underground (geological sites used as repositories) or chemically fixed to form a carbonate.]​ 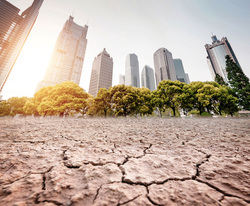 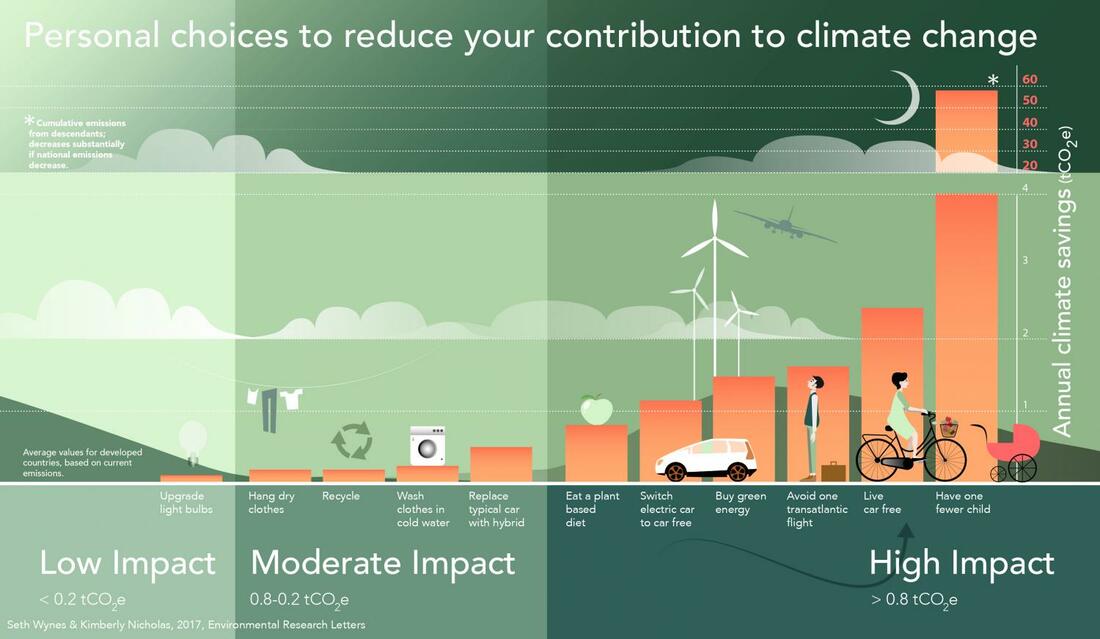 image from https://phys.org/news/2017-07-effective-individual-tackle-climate-discussed.html
7.3.U3 Mitigation strategies for carbon dioxide removal (CDR techniques) include: 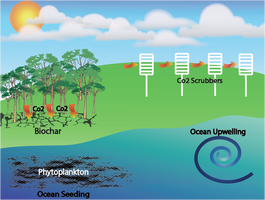 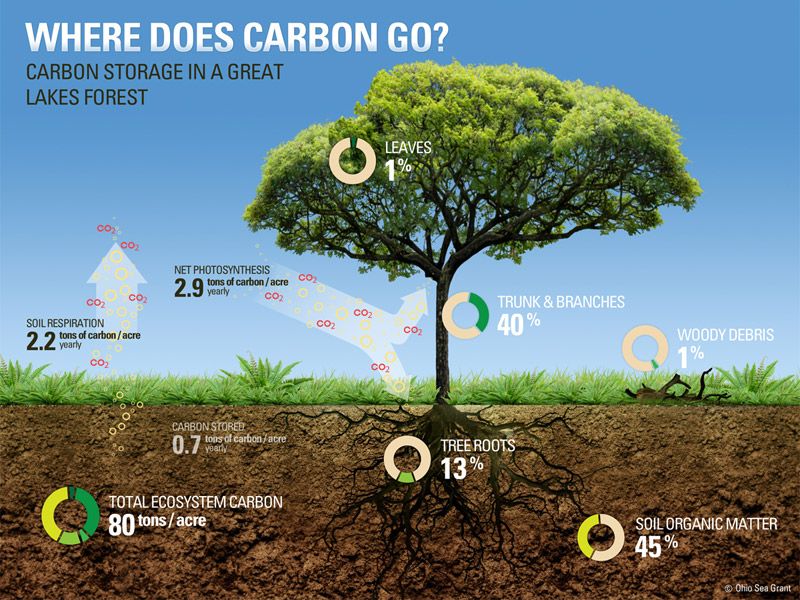 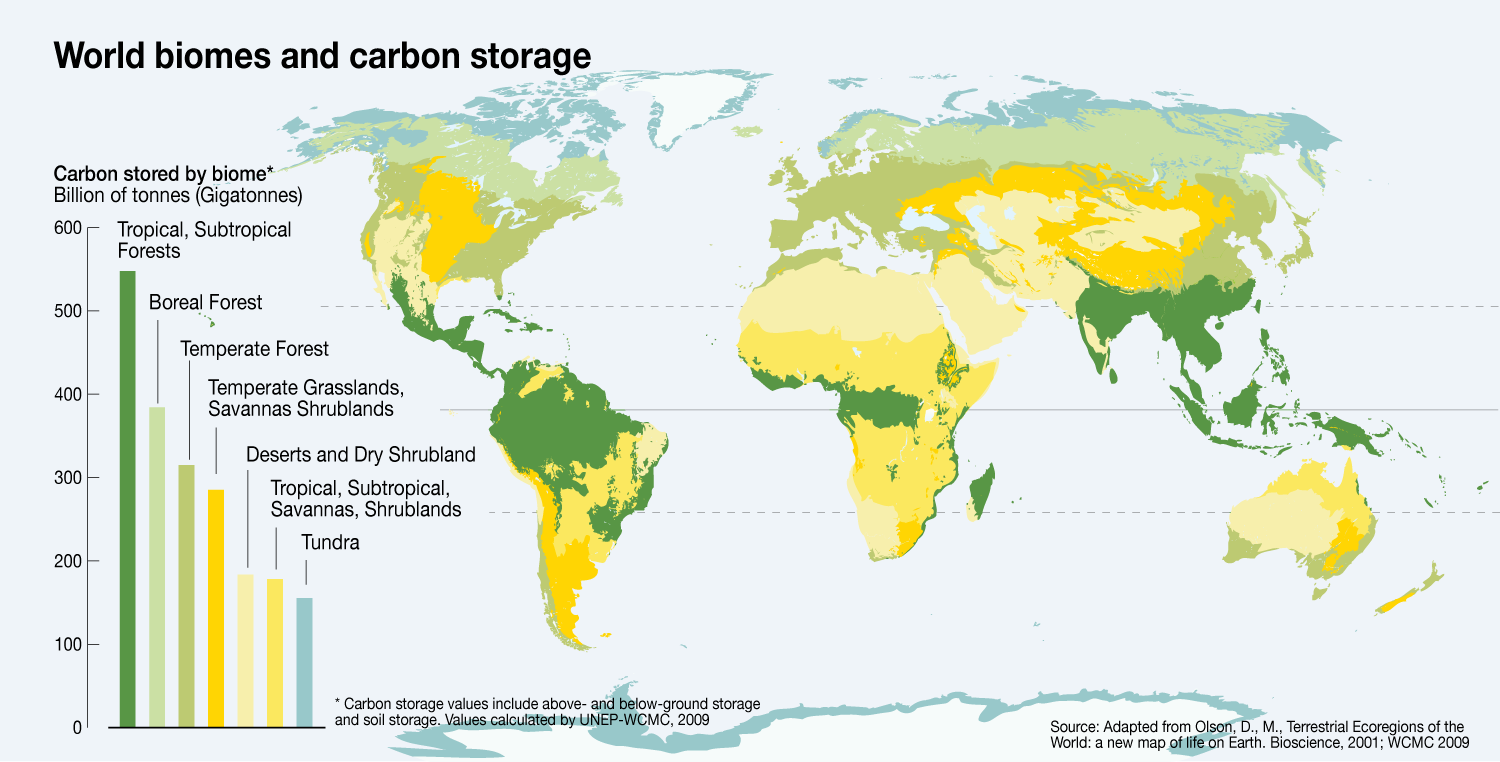 7.3.U4 Even if mitigation strategies drastically reduce future emissions of GHGs, past emissions will continue to have an effect for decades to come
The estimate of 40 years for climate lag, the time between the cause (increased greenhouse gas emissions) and the effect (increased temperatures), has profound negative consequences for humanity. However, if governments can find the will to act, there are positive consequences as well.

With 40 years between cause and effect, it means that average temperatures of the last decade are a result of what we were thoughtlessly putting into the air in the 1960’s. It also means that the true impact of our emissions over the last decade will not be felt until the 2040’s 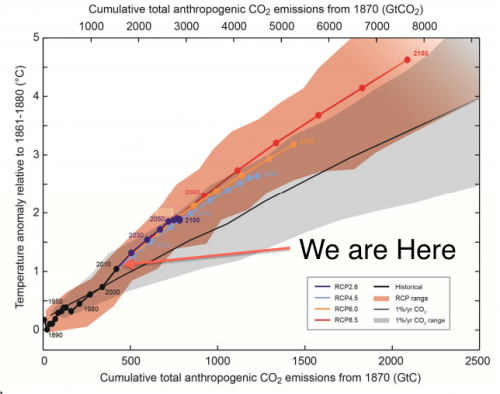 image fromhttps://www.climatecentral.org/news/major-greenhouse-gas-reductions-needed-to-curtail-climate-change-ipcc-17300
7.3.U5 Adaptation strategies can be used to reduce adverse affects and maximize any positive effects Examples of adaptations include flood defenses, vaccination programs, desalinization plants and planting of crops in previously unsuitable climates. 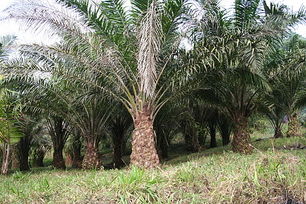 Adaptation are how to respond to climate change (reactive). They are designed to lower the risks posed by consequences of climate change. The adaptive capacity of a location with vary from place to place and can be dependent on financial and technological resources
Examples of planned adaptations

image from https://en.wikipedia.org/wiki/Climate_change_adaptation
7.3.U6 Adaptive capacity varies from place to place and can be dependent on financial and technological resources. MEDCs can provide economic and technological support to LEDCs
[Adaptation is the adjustment of natural or human systems in response to actual or expected climatic stimuli or their effects, which either moderates harm or exploits beneficial opportunities.]
There are many obstacles to a low-carbon world. Technological, economic, and political. Political obstacles are found nationally and internationally.

​Carbon dioxide imposes high costs on society but those who emit the carbon dioxide do not pay for the social costs that they cause.
​
The effectiveness of reducing carbon dioxide emissions and the implications for economic growth and national development, vary depending on the level of development of the country in question. MEDCs have greater economic resources to help solve the problem 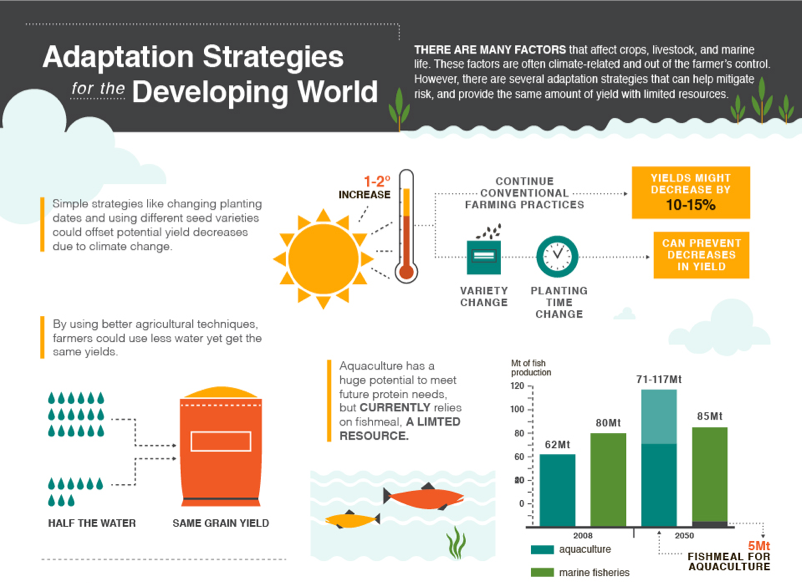 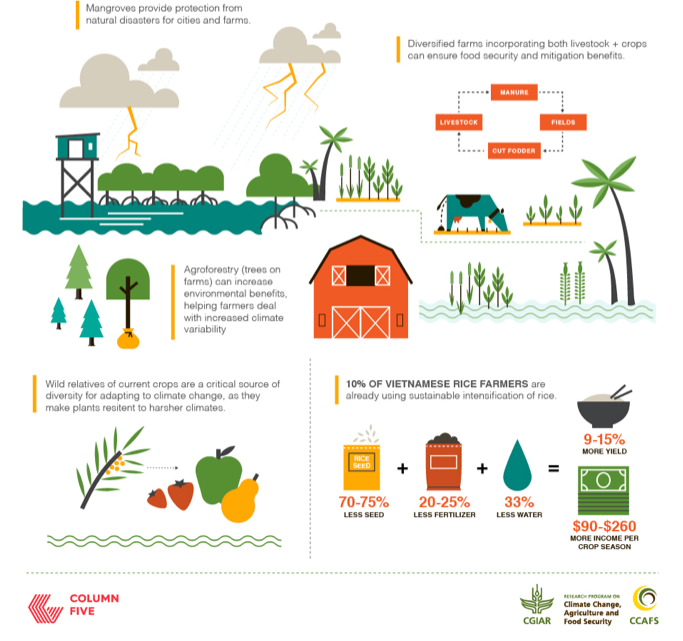 7.3.U7 There are international efforts and conferences to address mitigation and adaptation strategies for climate change; for example the Intergovernmental Panel on Climate Change (IPCC), National Adaptation Programmes of Action (NAPAs) and the United Nations Framework Convention on Climate Change (UNFCCC)
Rio Earth Summit
Kyoto Protocol 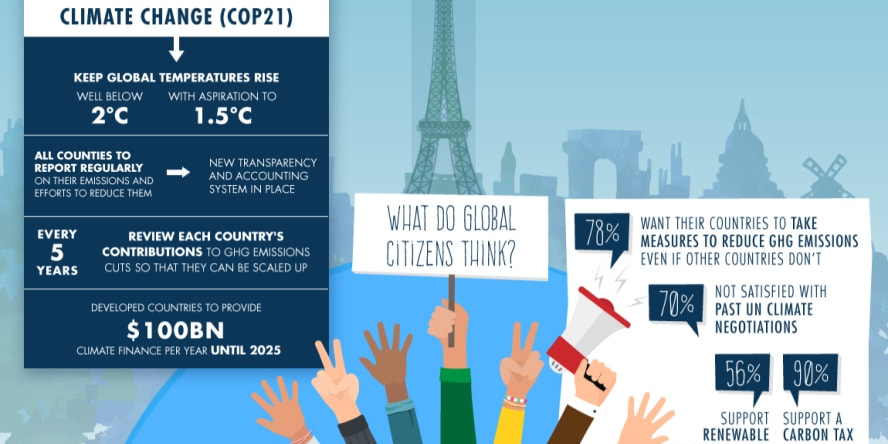 UNFCCC (United Nations Framework Convention on Climate Change)
went into effect 1994 but failed to slow down greenhouse gas emissions
​encouraged MEDCs to lead the way in climate change mitigation
​
Application and skills:
7.3.A1 Discuss mitigation and adaptation strategies to deal with impacts of climate change
[Two mitigation and two adaptation strategies should be considered]
Adaptation: live with the consequences of climate changeMitigation: reducing or stabilizing greenhouse gas emissions​
Factors you might consider
Calgary Canada Climate Program 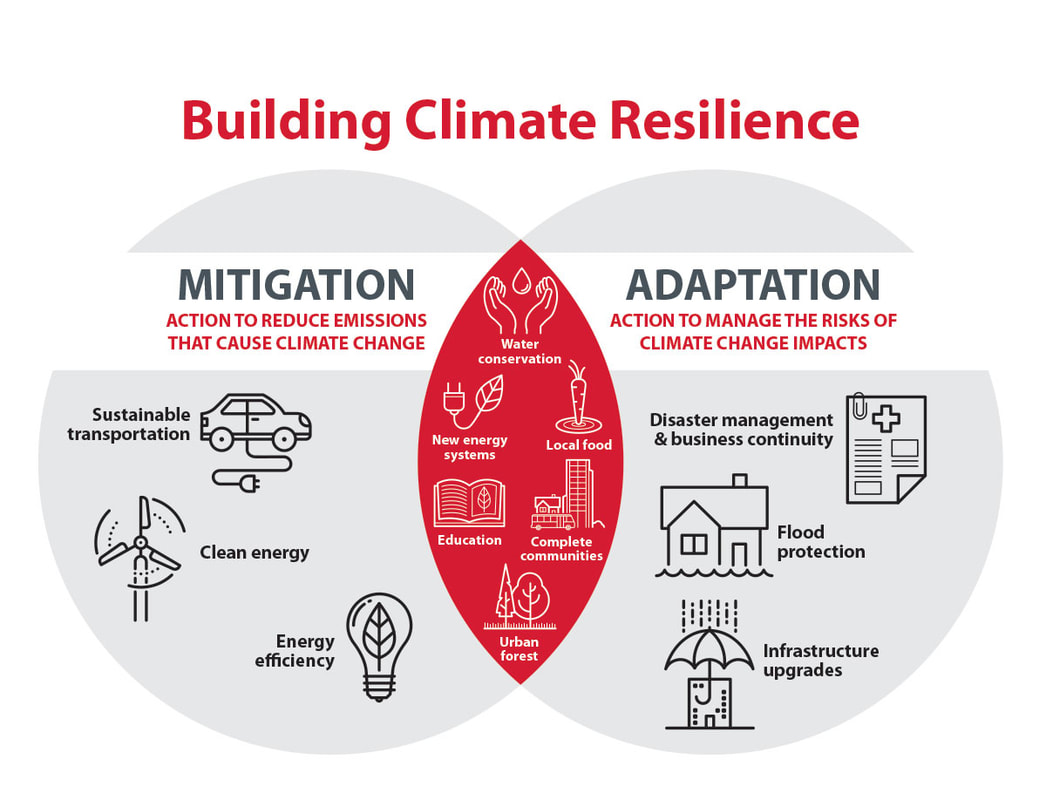 image from https://www.calgary.ca/UEP/ESM/Pages/Energy-Savings/Climate-Change.aspx?redirect=/climateprogram
7.3.A2 Evaluate the effectiveness of international climate change talks
​You should evaluate these strategies with regard to their effectiveness and the implications for MEDCs and LEDCs of reducing CO2 emissions in terms of economic growth and national development.
​
Consider:
Key Terms
Classroom Materials

Case Studies
Powerpoint and Notes Adapted from Brad Kremer, Masfar ​
​​​​​​​​Correct use of terminology is a key skill in ESS. It is essential to use key terms correctly when communicating your understanding, particularly in assessments. Use the quizlet flashcards or other tools such as learn, scatter, space race, speller and test to help you master the vocabulary.
Useful Links
UNEP climate change mitigation
IPCC mitigation and adaptation
Global Change report
NASA
Climate Change 2007: Working Group II: Impacts, Adaptation and Vulnerability
Let's Talk Energy
​Direct Agriculture Emissions
In The News
Could climate change cause humans and animals to SHRINK? Mammals became smaller due to global warming 54 million years ago - MailOnline 15 March 2017
New algae-based bioreactor can swallow carbon dioxide 400x faster than trees - Digital Trends, Sep 2019
International-mindedness:
TOK:
Video Clip
Today humanity produces more than 1,400 tons of carbon every minute. To combat climate change, we need to reduce fossil fuel emissions, and draw down excess CO2 to restore the balance of greenhouse gases. Like all plants, trees consume atmospheric carbon through photosynthesis. So what can trees do to help in this fight? Jean-François Bastin digs into the efforts to restore depleted ecosystems.
This animated video produced by the Wisconsin Educational Communications Board distinguishes the roles of mitigation and adaptation in responding to climate change. The video offers examples of actions that humans can take as individuals and a society to adapt to and mitigate the impacts of climate change on natural and built environments.
Climate change has already had clear impacts on natural and human systems. Over the coming decades, based on the various scenarios of emission of greenhouse gases, the range with which climate can change is quite wide, and depends on policy decisions that we take now
The GEF Small Grants Programme supports projects that address climate change mitigation, which is reducing or avoiding the emission of greenhouse gases; and climate change adaptation, which is assisting communities, especially in developing countries to become better able to cope with the negative impacts of climate change.
​The IPCC has produced a video on its Fifth Assessment Report (AR5).
The impacts of climate change destroy people's livelihoods and homes. They damage our infrastructure and disrupt communication and trade. Moreover, climate change is endangering development successes and the poor and marginalized are often affected the most. Even if we were to stop emissions instantly, the world would not stop warming immediately due to the amount of gases we have already emitted. That's why we must do both: reduce greenhouse gas emissions and adapt to inevitable climate change. But how can we adapt, considering that the precise extent and form of climate change aren't known?
Can The Paris Agreement Actually Stop Global Warming?
Can geoengineering save the planet? Injecting particles into the atmosphere to counter the warming effects of climate change would do nothing to offset the crop damage from rising global temperatures, according to a new analysis by UC Berkeley researchers.
​There’s technically a way to take pollution out of the air. But if we did that, where would we put it all?
Carbon Capture and Storage