In the Inheritance unit we will learn that heredity, or the continuity of traits between parent and offspring, is powered by the physical transmission of DNA between cells during reproduction. In this unit, you will learn about the origins of our modern understanding of heredity, as well as the basic rules that determine how parents’ traits determine the traits of their offspring.
​
​This unit will last 3 school days
​Essential idea:
​Nature of science:
Understandings
10.2 U 1 ​Gene loci are said to be linked if on the same chromosome. (Oxford Biology Course Companion page 448).​
Linkage refers to genes that are located on the same chromosome. Linked genes tend to be inherited together and the extent of crossing over depends on how close together they are on the chromosome. Linkage generally reduces the variety of offspring that can be produced. In genetic crosses, linkage is indicated when a greater proportion of the offspring resulting from a cross are of the parental type (than would be expected if the alleles were assorting independently). If the genes in question had been on separate chromosomes, there would have been more genetic variation in the gametes and therefore in the offspring. 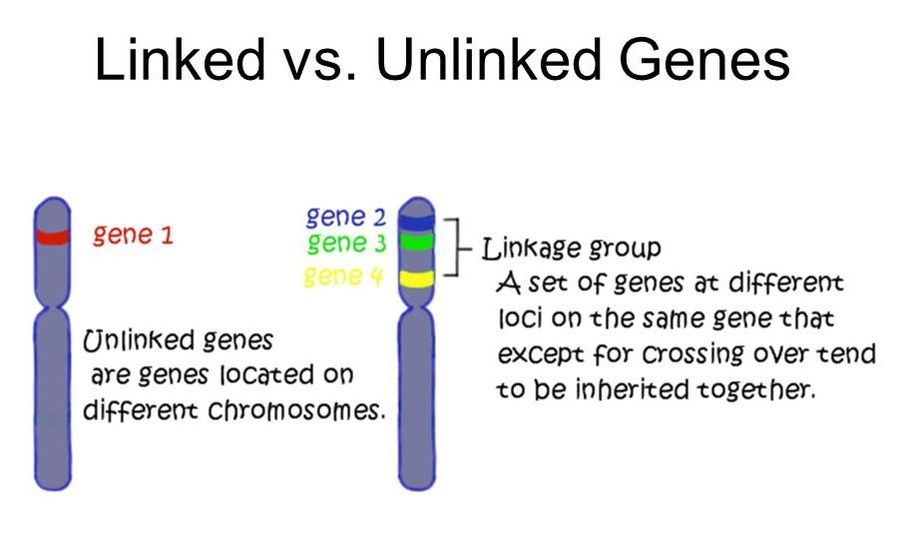 10.2 U 2 ​Unlinked genes segregate independently as a result of meiosis. (Oxford Biology Course Companion page 445).​
Unlinked genes are on different chromosomes. At Metaphase 1, each pair of homologous chromosomes line up at the equator of the spherical cell. For each homologous pair, the chromosomes assort to one side or the other. The alignment of any pair of homologous chromosomes is independent of all the other pairs. Thus, the mixture of unlinked genes in gametes is random.
10.2 U 3 ​Variation can be discrete or continuous.
Discontinuous variation This is where individuals fall into a number of distinct classes or categories, and is based on features that cannot be measured across a complete range. You either have the characteristic or you don't. Blood groups are a good example: you are either one blood group or another - you can't be in between, same goes for gender. Such data is called discrete (or categorical) data. Chi-squared statistical calculations work well in this case. 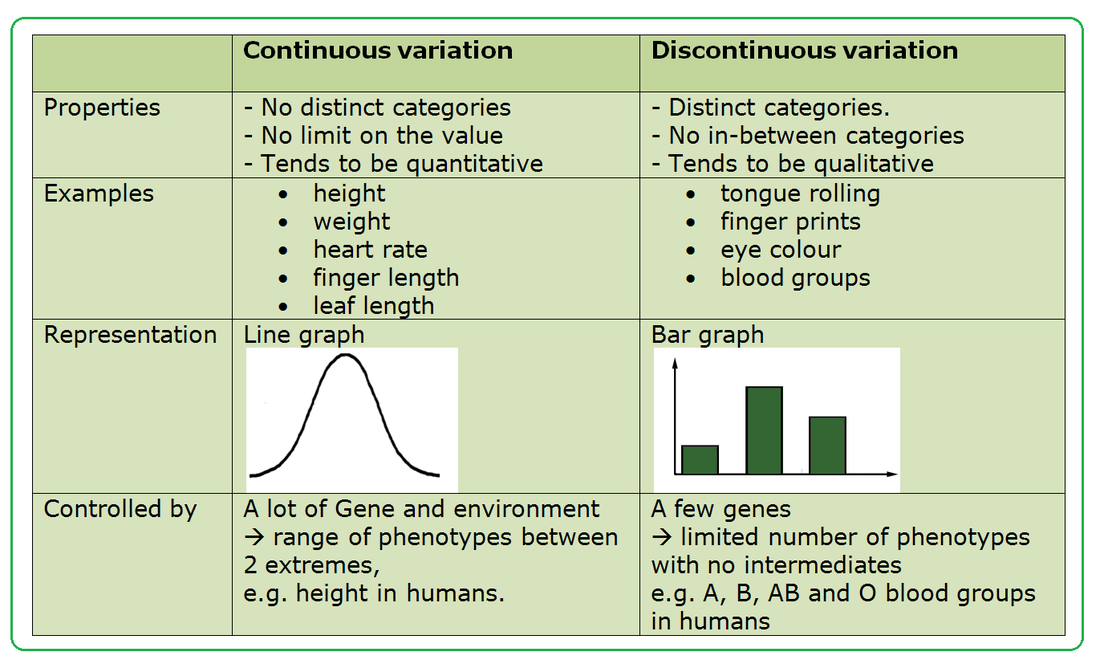 10.2 U 4 ​The phenotypes of polygenic characteristics tend to show continuous variation (Oxford Biology Course Companion page 450).​
Continuous variation is the combined effect of many genes (known as polygenic inheritance) and is often significantly affected by environmental influences. Milk yield in cows, for example, is determined not only by their genetic make-up but is also significantly affected by environmental factors such as pasture quality and diet, weather, and the comfort of their surroundings.

Polygenic traits are controlled by two or more than two genes (usually by many different genes) at different loci on different chromosomes. These genes are described as polygenes. Examples of human polygenic inheritance are height, skin colour and weight. Polygenes allow a wide range of physical traits. For instance, height is regulated by several genes so that there will be a wide range of heights in a population. 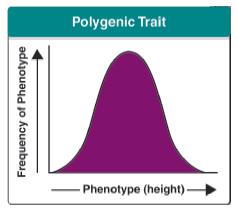 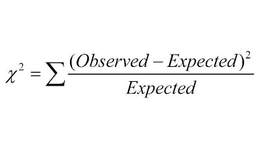 What it basically means is the sum of the (observed minus the expected) squared, divided by the expected. This value is then compared to a critical value from a chi-squared table (similar to a t-table) to determine if the numbers we see are due to random factors. This is useful in determining if the results from a dihybrid genetic cross are due to independent assortment. 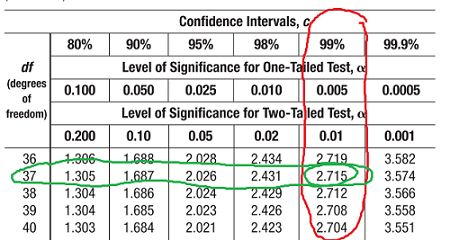 ​(Ignore the circled row and column)

If your OWN value for something is greater than the critical value, you REJECT the null hypothesis and ACCEPT the experimental hypothesis.

If you OWN value for something is less than the critical value, you ACCEPT the null hypothesis and REJECT  the experimental hypothesis.
Application
10. 2 A 1 ​Morgan’s discovery of non-Mendelian ratios in Drosophila. (Oxford Biology Course Companion page 446).

image from Wikipedia
10.2 A 2 ​Completion and analysis of Punnett squares for dihybrid traits. (Oxford Biology Course Companion page 448).​
Linked genes that have undergone recombination can be distinguished from unlinked genes via a test cross because the frequency of the recombinant genotypes will always be less than would occur for unlinked genes (crossing over does not happen every time)

Next, write out the possible gametes:   SB, SB, sb and sb or simply just SB and sb

10.2 A 3 ​Polygenic traits such as human height may also be influenced by environmental factors.(Oxford Biology Course Companion page 450).​
When one gene controls the expression of a trait, the number of phenotypes that are expressed is limited to the dominant phenotype or recessive phenotype. If there is co-dominance, this adds another possible phenotype that can be expressed.

With polygenic inheritance when two or more genes control the expression of a phenotype many possible phenotypes can exist. As the amount of genes that control one trait increase, the number of phenotypes increases to a point where it is impossible to determine the genotype by just observing the phenotype. Each additional gene has an additive affect, increasing the phenotypes. This is called continuous variation.

If you graphed the frequency of the occurrence of different phenotypic variations in a population, there should be a normal distribution. Continuing with human height, there will be some really tall people and some really short people, but the majority of people will be average height (normal distribution). As the number of genes that control a certain trait increases, the closer the distribution of the phenotypes represents a normal distribution.
Skills
10.2 S 1 ​Calculation of the predicted genotypic and phenotypic ratio of offspring\ of dihybrid crosses involving unlinked autosomal genes.  (Oxford Biology Course Companion page 447).​
See 10.2.A2 Above
10.2 S 2 ​Identification of recombinants in crosses involving two linked genes. (Oxford Biology Course Companion page 451).​
In a cross between two true breeding or homozygous parents the following would be the genotypes of the cross: TTBB x ttbb.

On an exam if the genes are linked the genotypes would be represented as follows:

The recombinants would be represented by the symbols on the right
TB, Tb, and tB would now be the new linked alleles for the next generation

10.2 S 3 ​Use of a chi-squared test on data from dihybrid crosses. (Oxford Biology Course Companion page 453).​
​For an example, use Mendel’s results from his pea plant crosses.

When he did a dihybrid cross between two heterozygotes RrYy x RrYy, the expected phenotypic ratio due to independent assortment would be 9:3:3:1. Look at the chart below to see his actual results. 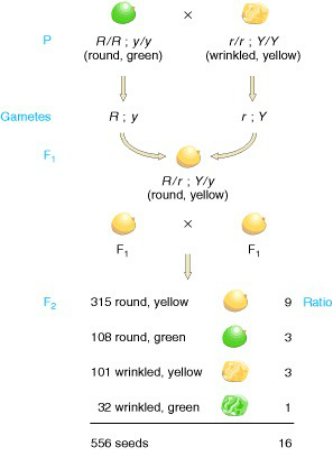 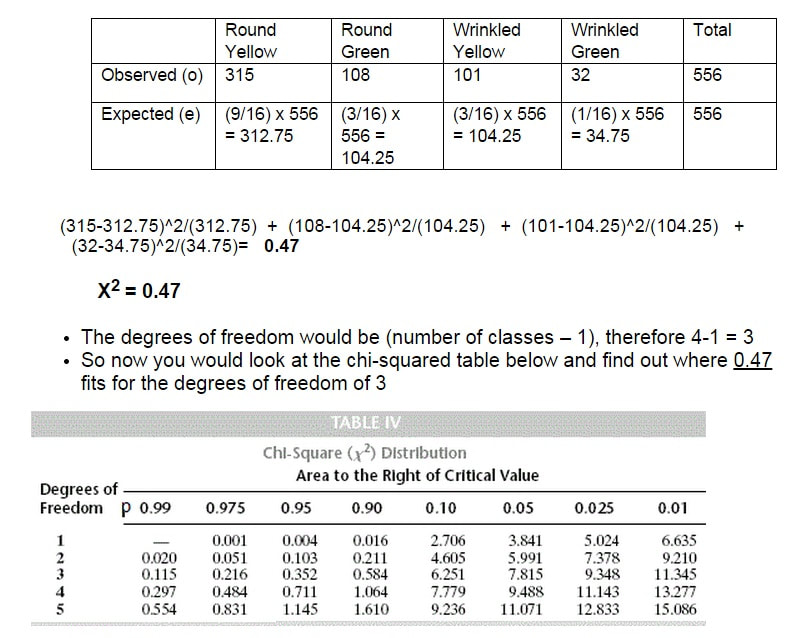 As you can see from the table above the critical value at the 0.05 level of significance is 7.815.
What the p-value of 0.05 or 5% indicates is the probability of getting the results you did (or more extreme results) given that the null hypothesis is true.

If the calculated value is above or equal to 7.815 then we reject the Ho and accept the HA that the alleles in question are linked. However, since our chi-squared value of 0.47 is significantly less than this value (it has a p-value of 0.90 or 90%) we accept the Ho that the results that Mendel saw were due to independently assortment of the alleles.


NOTE: Alleles are usually shown side by side in dihybrid crosses, for example, TtBb. In representing crosses involving linkage, it is more common to show them as vertical pairs, for example:
Key Terms
Classroom Materials

​Topic 10.2 Review
​​PowerPoint and Notes on Topic 10.1 by Chris Payne
​​​Correct use of terminology is a key skill in Biology. It is essential to use key terms correctly when communicating your understanding, particularly in assessments. Use the quizlet flashcards or other tools such as learn, scatter, space race, speller and test to help you master the vocabulary.
Useful Links

Study of short Peruvians reveals new gene with a major impact on height - Science, May 2018
New gene variants reveal the evolution of human skin color - Science, Oct 2017
TOK
Video Clips
Each father and mother pass down traits to their children, who inherit combinations of their dominant or recessive alleles. But how do we know so much about genetics today?
Hank and his brother John discuss heredity via the gross example of relative ear wax moistness.
For all of human history, we've been aware of heredity. Children look like their parents. But why? When Gregor Mendel pioneered the field of genetics, he began to try to answer that question, and now that we know about chromosomes, all of his work will make a lot of sense. Let's take a look at Mendel's work, his laws of segregation and independent assortment, and try to understand what these mean for genetics and inheritance
Paul Andersen introduces the Punnett Square as a a powerful tool in genetic analysis.  He tries to address major misconceptions that students have when use a Punnett Square.  He gives a number of examples of monohybrid crosses and one example of a dihybrid cross.  The square is a simple tool that uses the outcome of meiosis to determine possible offspring in a cross.
This video will show how to set up and solve everyone's favorite 16 square Punnett square
Explore inheritance when carried on the X chromosome with the Amoeba Sisters!
Discover more types of non-Mendelian inheritance such as incomplete dominance and codominance with the Amoeba Sisters!
In this video Paul Andersen explains the elements in the Hardy-Weinberg equation; including the allele frequency and phenotype frequency.  He begins with a brief explanation of phenotypes and genotypes.  A sample problem is worked out and another problem is included.
Paul Andersen shows you how to solve simple Hardy-Weinberg problems.  He starts with a brief description of a gene pool and shows you how the formula is derived.  He then shows you how to solve a couple of sample problems.
Paul Andersen shows you how to calculate the ch-squared value to test your null hypothesis.  He explains the importance of the critical value and defines the degrees of freedom.  He also leaves you with a problem related to the animal behavior lab.
Reference sites