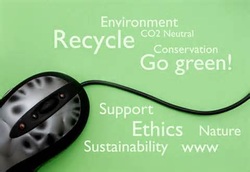 image from realgreenearth.com
What is a world view?? Maybe more importantly what is an environmental world view. What is it? This is the "world view" or set of paradigms that shape the ways that individuals and groups approach environmental issues. It can also be viewed as a system as there are inputs and outputs that influence it.

In this unit we will look at the environmental philosophies of an individual, as with that of a community. We will see how these philosophies are shaped by cultural, economic and socio-political context. You should recognize this and appreciate that others may have equally valid viewpoints. You will also justify your own personal viewpoint.

Significant ideas:
Big questions
Knowledge and Understanding
1.1.U1 Significant historical influences on the development of the environmental movement have come from literature, the media, major environmental disasters, international agreements and technological developments. (Guidance 1: A variety of significant historical influences could be covered, but with a minimum of three in-depth examples. Possible examples could include: James Lovelock’s development of the Gaia hypothesis; Minamata disaster; Rachel Carson’s book Silent Spring (1962);, Davis Guggenheim’s documentary An Inconvenient Truth
(2006); Chernobyl disaster of 1986; Fukushima Daiihi nuclear disaster of 2011; whaling; Bhopal disaster of 1984; Gulf of Mexico oil spill of 2010; Chipko movement; Rio Earth Summit 2012 (Rio+20); Earth Day; Green Revolution;
Copenhagen Accord; recent or local events of student interest.)
(Guidance 2: In the range of historical influences selected, it is beneficial to have both local and global examples.)

image from www2.epa.gov
Significant historical influences on the development of the environmental movement have come from literature, the media, major environmental disasters, international agreements and technological development.

Timeline:
1.1.U2 An EVS is a worldview or paradigm that shapes the way an individual, or group of people, perceives and evaluates environmental issues, influenced by cultural, religious, economic and socio-political contexts. (Guidance: A society is an arbitrary group of individuals who share some common characteristics, such as geographical location, cultural background, historical timeframe, religious perspective, value system and so on.) 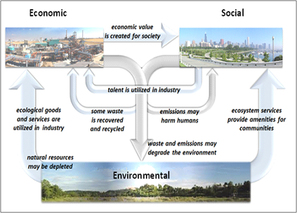 image from www.epa.gov
This is a particular world view or set of paradigms that shapes the way an individual or group of people perceive and evaluate environmental issues. This will be influenced by cultural (including religious), economic and socio-political context. An environmental value system is a system in the sense that it has inputs (for example, education, cultural influences, religious doctrine, media) and outputs (for example, decisions, perspectives, courses of action) determined by processing these inputs.


Ecosystems may often cross national boundaries and this may lead to conflict arising from the clash of different value systems about exploitation of resources (for example, ocean fishing and whaling).
1.1.U3 An EVS might be considered as a system in the sense that it may be influenced by education, experience, culture and media (inputs), and involves a set of interrelated premises, values and arguments that can generate consistent decisions and evaluations (outputs). (Guidance: EVSs are individual; there is no “wrong” EVS.)
An environmental value system is a system in the sense that it has;
1.1.U4 There is a spectrum of EVSs, from ecocentric through anthropocentric to technocentric value systems. 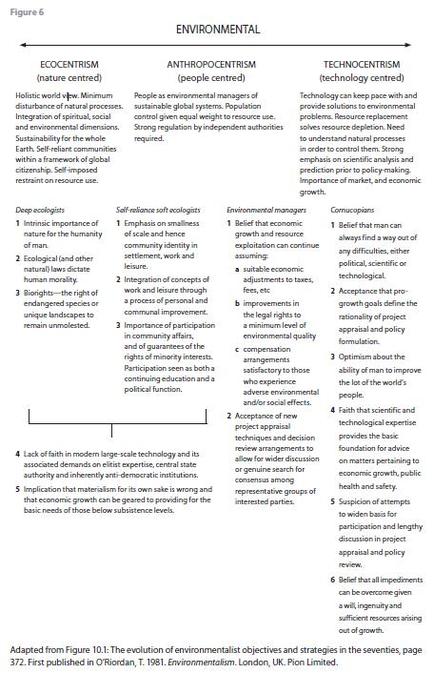 1.1.U5 An ecocentric viewpoint integrates social, spiritual and environmental dimensions into a holistic ideal. It puts ecology and nature as central to humanity and emphasizes a less materialistic approach to life with greater self-sufficiency of societies. An ecocentric viewpoint prioritizes biorights, emphasizes the importance of education and encourages self-restraint in human behaviour. 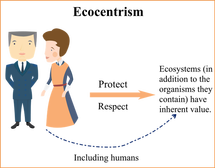 image from Chegg
This is a holistic worldview that is nature centered and respects the rights of nature. Ecocentrics such as deep ecologists put more value on nature than humanity and believe in biorights. (The right of endangered species or landscape to remain undisturbed). They also wish to have policies to reduce the human impact on the environment which would decrease the population and consume less resources. In summary they believe that:
1.1.U6 An anthropocentric viewpoint argues that humans must sustainably manage the global system. This might be through the use of taxes, environmental regulation and legislation. Debate would be encouraged to reach a consensual, pragmatic approach to solving environmental problems. 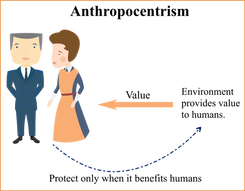 image from Chegg
Anthropocentrism is a viewpoint/theory that is people centered and gives preferences to human beings above all other considerations. So if you believe that the Earth exists for us, humans and we can rightfully benefit as much as we want from the environment then you are anthropocentric. You would also believe that:
1.1.U7 A technocentric viewpoint argues that technological developments can provide solutions to environmental problems. This is a consequence of a largely optimistic view of the role humans can play in improving the lot of humanity. Scientific research is encouraged in order to form policies and to understand how systems can be controlled, manipulated or changed to solve resource depletion. A pro-growth agenda is deemed necessary for society’s improvement.
This means that values are centered on technology and this type of view believes that it can provide solutions to all environmental problems. Similar to anthropocentrism, it is a worldview, which conceives that nature is present to benefit human beings.

A technocentric viewpoint argues that technological developments can provide solutions to environmental problems. (technology” does not mean “electronics”; technology means tools, devices and methods (can include electronics). This is a consequence of a largely optimistic view of the role humans can play in improving the lot of humanity. Scientific research is encouraged in order to form policies and understand how systems can be controlled, manipulated or exchanged to solve resource depletion. A pro-growth agenda is deemed necessary for society’s improvement.

1.1.U8 There are extremes at either end of this spectrum (for example, deep ecologists–ecocentric to cornucopian–technocentric), but in practice, EVSs vary greatly depending on cultures and time periods, and they rarely fit simply or perfectly into any classification.
Soft ecology: self-sufficiency in resource management. Ecological understand a principle for all aspect of living. Shun large scale profit motives for action, for small-scale community orientated schemes.

Deep ecology: a need for spiritual revolution to fix environmental problems is at the core of all environmental issues. Nature is at the center, equal rights for species. (nature before human)

​Environmental managers: no radical political agenda but promote working to create change within the existing social and political structures. Current economic growth can be sustained if environmental issues are managed by legal means or political agreement. (believe that the environment can be used if manage properly)

Cornucopians: a perspective that doesn't really see environmental issues as "problems" as humans have always found a way out of difficulties in the past. New resources and technologies will solve any environmental problems as they are encountered. There is no need for radical agendas, socio-economic or political reform. (don't care for the environment; human come first)

1.1.U9 Different EVSs ascribe different intrinsic value to components of the biosphere.
Some people believe that all / some elements of the natural environment have intrinsic value. They should be valued just because they exist. There are a number of countries which have given an equal right to nature in their constitutions, such as Equador and Bolivia. There is also a growing movement to give rivers the right to exist.

Common Native American EVS’s
​
There are many EVS’s among different tribes so this is a generalization
Applications
1.1.A1 Discuss the view that the environment can have its own intrinsic value.
Resources can be valued in several ways;​
These are examples of resources being valued ¨instrumentally¨.

Resources can also be valued ¨intrinsically¨. This means that a resource is valued for its cultural, esthetic, spiritual or philosophical (moral) value and are valued regardless of their potential use to humans.

Attempts are being made to acknowledge diverse valuations of nature (for example, biodiversity, rate of depletion of natural resources) so that they may be weighed more rigorously against more common economic values (for example, gross national product (GNP)). However, some argue that these valuations are impossible to quantify and price realistically. Not surprisingly, much of the sustainability debate centres on the problem of how to weigh conflicting values in our treatment of natural capital.
1.1.A2 Evaluate the implications of two contrasting EVSs in the context of given environmental issues. 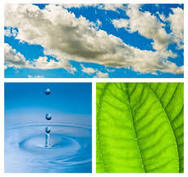 The development of environmental movements is often viewed from a very western perspective. We are going to investigate a couple of examples that will help broaden our understanding of how different societies across the world relate to the environment.

​The societies chosen should demonstrate significant differencesNative American Communal property (no one owns property)
1.1.A3 Justify, using examples and evidence, how historical influences have shaped the development of the modern environmental movement (Guidance: During the ESS course students should be encouraged to develop their own EVS and to be able to justify their decisions on environmental issues based on their EVSs.)​ 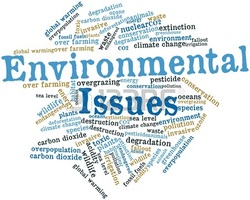 View the videos A through H. Decide where each of them lie on the environmental philosophies continuum presented in 1.1.2.

Should Pesticides Be Ban Debate: Opinion In class activity

Discuss how the events listed under history of the modern environmental movement shaped the people who lived through them.
​
Compare the environmental value systems of two distinctly contrasting societies:
Powerpoint and Notes Adapted from Brad Kremer, P Brooks and Ms. McCrindle
Correct use of terminology is a key skill in ESS. It is essential to use key terms correctly when communicating your understanding, particularly in assessments. Use the quizlet flashcards or other tools such as learn, scatter, space race, speller and test to help you master the vocabulary.
Useful Links

Bee studies stir up pesticide debate, Nature, Cressey, 22 April 2015
The grassroots movement that shut down an Indian copper plant - BBC, 29 May 2018
Straws. Bottle caps. Polyester. These are the new targets of California's environmental movement - LA Times. 28 May 2018
So Japan can't hunt whales any more? That doesn't mean they're safe - Guardian, 24 March 2014
​
TOK:
International-Mindedness
Video Clips
Short documentary on the environmental movement (1960-1970)
This video provides visual examples of how we value the world around us in various manners.
Conservacion Patagonica, a non-profit organization dedicated to protection of wildland ecosystems and biodiversity in the Patagonia region of Chile and Argentina, is working towards the goal of creating Patagonia National Park, a world-class park similar in size to Yosemite National Park in California
Spanning 50 years of grassroots and global activism, this Sundance documentary brings to light the vital stories of the environmental movement where people fought -- and succeeded -- against enormous odds
Through visually stunning footage from over fifty countries, all shot from an aerial perspective, Yann Arthus–Bertrand shows us a view most of us have never seen. He shares with us his sense of awe about our planet and his concern for its health. With this film, Arthus-Bertrand hopes to provide a stepping-stone to further the call to action to take care of our HOME.
​Photographs do more than document history -- they make it. At TED University, Jonathan Klein of Getty Images shows some of the most iconic, and talks about what happens when a generation sees an image so powerful it can't look away -- or back
A graduate from the UTSC journalism program, Emily Hunter has graced the world stage with her empowering and innovative work as an environmental advocacy journalist, who is constantly reporting throughout the climax of global activist movements
Manvendra Singh Shekhawat's love for carefully preserving cultural heritage and traditions and reframing them in a modern context whilst maximising human potential is uniquely expressed through his experiential hotels. His NGO launched Jaisalmer’s largest conservation and cleanliness campaign in 2013 and he is currently creating an ever-evolving, cross-disciplinary, collaborative, whole-system community for a more productive and personally fulfilling societal model.
Bruce is shown how to hunt off the land and is invited to be initiated into the tribe. Fascinating culture films from Tribe - BBC worldwide.
On 26 March 1974, people of Himalayan state of Uttarakhand started Chipko movement or Chipko Andolan, through the act of hugging trees to protect them from being felled.
This is a great video to analyse EVSs