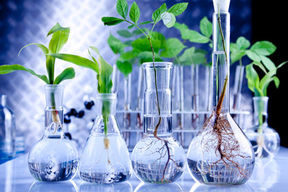 In the DNA Biotechnology unit students are apply their learning of DNA structure to biotechnological applications.  DNA electrophoresis, sequencing and  databases are studied.

​The unit is planned to take 3 school days
Essential idea:
Nature of science:
Understanding:
​3.5.U1 Gel electrophoresis is used to separate proteins or fragments of DNA according to size. (Oxford Biology Course Companion page 187).​
In gel electrophoresis DNA fragments move in an electric field and separate from each other according to their sizes. The smallest fragments will move the farthest distance from the origin of the DNA sample.

PCR occurs in a thermal cycler and uses variations in temperature to control the replication process via three steps:

3.5.U2 ​PCR can be used to amplify small amounts of DNA. (Oxford Biology Course Companion page 188).​
Gel electrophoresis is a laboratory technique used to separate and isolate proteins or DNA fragments based on mass / size

Forensics: DNA fingerprinting for criminal casesDNA fingerprinting to determine identity
DNA Fingerprinting Animation
3.5.U4 ​Genetic modification is carried out by gene transfer between species.
A gene determines a particular trait by encoding for a specific polypeptide in a given organism. Because the genetic code is (almost) universal, an organism can potentially express a new trait if the appropriate gene is introduced into its genome. The transfer of genes between species is called gene modification, and the new organism created is called a transgenic. When genes are transferred between species, the amino acid sequence translated from them is unchanged – the same polypeptide is produced. Genes are transferred from eukaryotes –> bacteria

3.5.U6 ​Many plant species and some animal species have natural methods of cloning. (Oxford Biology Course Companion page 196).
​Clones are groups of genetically identical organisms that are derived from a single original parent cell.  Cloning is the process through which these identical organisms are produced.  The size of clones can range from two (i.e. identical twins) to hundreds (i.e. crops of commercially grown plants).

3.5.U7 ​Animals can be cloned at the embryo stage by breaking up the embryo into  more than one group of cells. (Oxford Biology Course Companion page 198).​

Application
3.5.A1 Use of DNA profiling in paternity and forensic investigations.  (Oxford Biology Course Companion page 189).​
DNA profiling involves the use of gel electrophoresis of DNA. 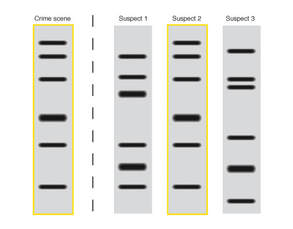 3.5.A2 ​Gene transfer to bacteria using plasmids makes use of restriction endonucleases and DNA ligase.
E. coli is used in gene technology because some of its DNA is found on plasmids (smaller circles of DNA). These plasmids can be removed and cleaved by restriction enzymes at target sequences. DNA fragments from another organism can also be cleaved by the same restriction enzyme, and these pieces can be added to the open plasmid and spliced together by ligase. The recombinant plasmids formed can be inserted into new host cells and cloned. When genes are transferred between species, the amino acid sequence of polypeptides translated from them is unchanged because the genetic code is universal.The basic technique in gene transfer is outlined below. 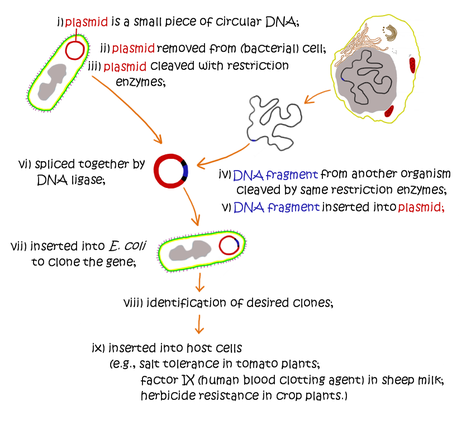 3.5.A3 ​Assessment of the potential risks and benefits associated with genetic modification of crops.
3.5.A4 ​Production of cloned embryos produced by somatic-cell nuclear transfer. Oxford Biology Course Companion page 199).
Somatic cell nuclear transfer is a method by which cloned embryos can be produced using differentiated adult cells. Somatic cells are removed from the adult donor and cultured (these cells are diploid and contain the entire genome). An unfertilised egg is removed from a female adult and its haploid nucleus is removed to produce an enucleated egg cell. The enucleated egg cell is fused with the nucleus from the adult donor to make a diploid egg cell (with the donor’s DNA). An electric current is then delivered to stimulate the egg to divide and develop into an embryo. The embryo is then implanted into the uterus of a surrogate and will develop into a genetic clone of the adult donor 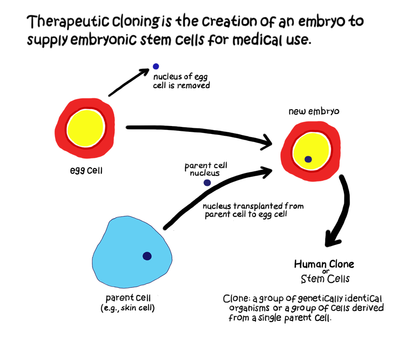 Artificial Embryo Twinning
Somatic Cell nuclear Transfer
Skill
3.5.S1 ​Design of an experiment to assess one factor affecting the rooting of stem-cuttings.
A stem cutting is a separated portion of plant stem that can regrow into a new independent clone via vegetative propagation
​
There are a variety of factors that will influence successful rooting of a stem cutting, including:
3.5.S2 ​Analysis of examples of DNA profiles. (Oxford Biology Course Companion page 190).​
3.5.S3 ​Analysis of data on risks to monarch butterflies of Bt crops. 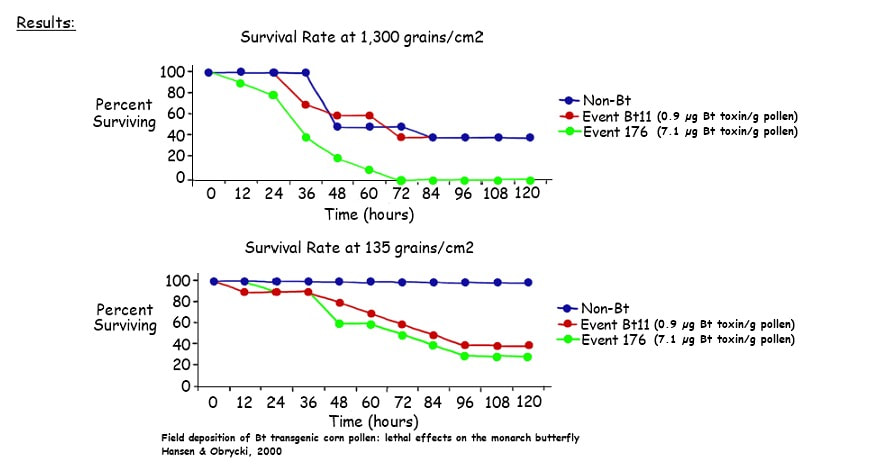 The Biology Project. Click on Human Biology. Work through DNA Forensics 1 and 2


Topic 3.5 Review
Powerpoint and Notes on Topic 3.5 from Chris Payne
​​​​​​​​​​​​Correct use of terminology is a key skill in Biology. It is essential to use key terms correctly when communicating your understanding, particularly in assessments. Use the quizlet flashcards or other tools such as learn, scatter, space race, speller and test to help you master the vocabulary.

Genetic Modification in Crops and Animals
Glowing pigs and fish: Animal Farm TV series
GM food and you (objective, worth watching)
David Suzuki talks about GMO and the precautionary principle. For more about the precautionary principle, refer to 5.2 Greenhouse Effect.
Good extract from The Geek Manifesto by Mark Henderson on GMO’s and protestors.
Here is an interesting, if superficial, infographic on why we need more robust crops in many regions of the world. Your challenge – find out how these crops are modified and produced.


In the News:
Scientists to sequence genomes of hundreds of newborns (2013-09-04)
Will Sequencing Your Genes Change The Way You Live — And Die? (2013-09-13)
Engineered Golden Rice May Be Planted Soon In Philippines (2013-08-06)
GM rice delivers antibodies against deadly rotavirus (2013-08-09)
What's Up With That, Doc? Researchers Make Bunnies Glow (2013-08-15)
On voters’ plates:  genetically  engineered crops (2013-08-12)
Activists Destroy 'Golden Rice' Field Trial (2013-08-09)
Gene therapy treats children with rare diseases (2013-08-10)
Scientists Condemn Destruction of
Golden Rice Field Trial (2013-08-15)
Are Engineering Foods Evil? (article preview only, 2013-08-25)
Engineered bacterium hunts down pathogens (2013-09-11)
Owner of John Lennon's tooth hopes to clone the late Beatle (2013-08-22)
BBC News Kickstarter crowd gives glowing plant the green lights
But do GM crops encourage resistance and increased pesticide and herbicide use? from the Guardian.
This article from oneinsevenpeople outlines the use of GM mosquitoes in fighting dengue. But is there a serious knowledge gap standing in our way?
How GM Mosquito work
Download this Stem Cell cribsheet from SEED Magazine
Therapeutic cloning cures Parkinsons mice
News: Dolly team Scientists clone human brain cells, from the Guardian
More about cloning from ActionBioscience
Extinct Pyrenrean Ibex cloned back into existence – for seven minutes.
US says genes should not be patented, from the NY Times

Video Clips:
​Paul Andersen describes the process of DNA fingerprinting and DNA profiling. He explains how variability in STRs can be used to identify individuals. He explains the importance of DNA fingerprinting in forensics and paternity cases
​PCR is a process of amplifying the target DNA sequence using Taq DNA polymerase and a set of primers. This whole process is conducted in a thermocycler machine also known as a PCR machine that repeatedly changes temperature cycles to complete the process of DNA amplification.
Explore electrophoresis with The Amoeba Sisters! This biotechnology video introduces gel electrophoresis and how it functions to separate molecules by size.
Restrictive Enzymes
Gene Therapy
Genetic Modifications
As Chair of the Department of Agronomy, head of the Department of Genetics and Biotechnology at the Biotechnical faculty, University of Ljubljana, Borut Bohanec possesses a broad overview of classical and modern techniques of plant breeding. For many years he has been following advances in the field of genetically modified organisms and wishes for better understanding of the issue among the general public.
This short clip from Science in Europe outlines the state of GM food in Europe and has a nice explanation of the precautionary principle (it fits better here than in the Greenhouse Effect unit).
​In 1997, Scottish scientists revealed they had cloned a sheep and named her Dolly, sending waves of future shock around the world that continue to shape frontiers of science today.
Any molecular biologist will tell you that genetic engineering is tricky. But up until recently we might be witnessing a new age in human development.
Now that genetic engineering tools like CRISPR allow us to edit our genes, how will that impact human evolution going forward? Are designer babies or eugenics around the corner? Welcome to a world of nonrandom mutation and unnatural selection.
​ Scientist and community lab advocate Ellen Jorgensen is on a mission to explain the myths and realities of CRISPR, hype-free, to the non-scientists among us.
CRISPR gene drives allow scientists to change sequences of DNA and guarantee that the resulting edited genetic trait is inherited by future generations, opening up the possibility of altering entire species forever.
Reference sites