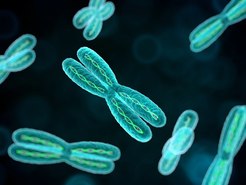 In the Chromosomes unit students learn the structure of the chromosome and identify the consequences of a base substitution mutation.

The unit is planned to take 3  school days
Essential idea:
​Nature of science:
​Understandings
3.2.U1 Prokaryotes have one chromosome consisting of a circular DNA molecule.  (Oxford Biology Course Companion page 18).​
Prokaryotes do not possess a nucleus – instead genetic material is found free in the cytoplasm in a region called the nucleoid

The DNA of prokaryotic cells is naked – meaning it is not associated with proteins for additional packagingProkaryotes have one chromosome consisting of a circular DNA molecule
3.2.U2 Some prokaryotes also have plasmids but eukaryotes do not. Oxford Biology Course Companion page 150).
Plasmids are small, circular DNA molecules that contain only a few genes and are capable of self-replication. Plasmids are present in some prokaryotic cells, but are not naturally present in eukaryotic cells
3.2.U3 Eukaryote chromosomes are linear DNA molecules associated with histone proteins (Oxford Biology Course Companion page 151).​ 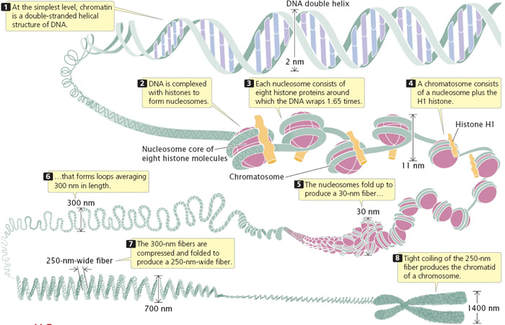 3.2.U4 In a eukaryote species there are different chromosomes that carry different genes.
Eukaryotic chromosomes are linear molecules of DNA that are compacted during cell division (mitosis or meiosis). Each chromosome has a constriction point called a centromere, which divides the chromosome into two sections (or ‘arms’). The shorter section is designated the p arm and the longer section is designated the q arm.  The genetic material of eukaryotic cells consist of multiple linear molecules of DNA that are associated with histone proteins

The packaging of DNA with histone proteins results in a greatly compacted structure, allowing for more efficient storage 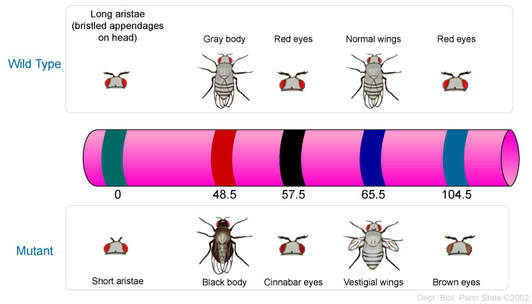 image from online.science.psu.edu
3.2.U5 Homologous chromosomes carry the same sequence of genes but not necessarily the same alleles of those genes. (Oxford Biology Course Companion page 152).​
Sexually reproducing organisms inherit their genetic sequences from both parents . This means that these organisms will possess two copies of each chromosome (one of maternal origin ; one of paternal origin). These maternal and paternal chromosome pairs are called homologous chromosomes

They are not identical to each other because some of the genes on them, the alleles are different
The species can be interbreed – if 2 eukaryotes are members of the same species we can expect each of the chromosomes in one of them to be homologous with at least one chromosome in the other. 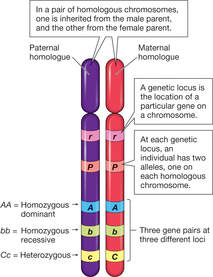 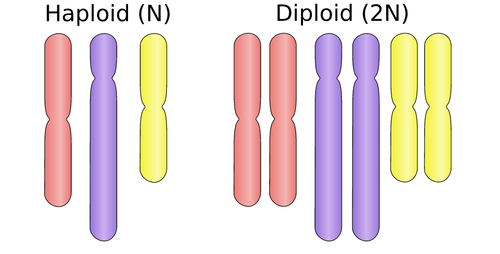 image from Biomysteries
3.2.U9 A karyogram shows the chromosomes of an organism in homologous pairs of decreasing length. (Oxford Biology Course Companion page 157).​
Karyotypes are the number and types of chromosomes in a eukaryotic cell – they are determined via a process that involves: 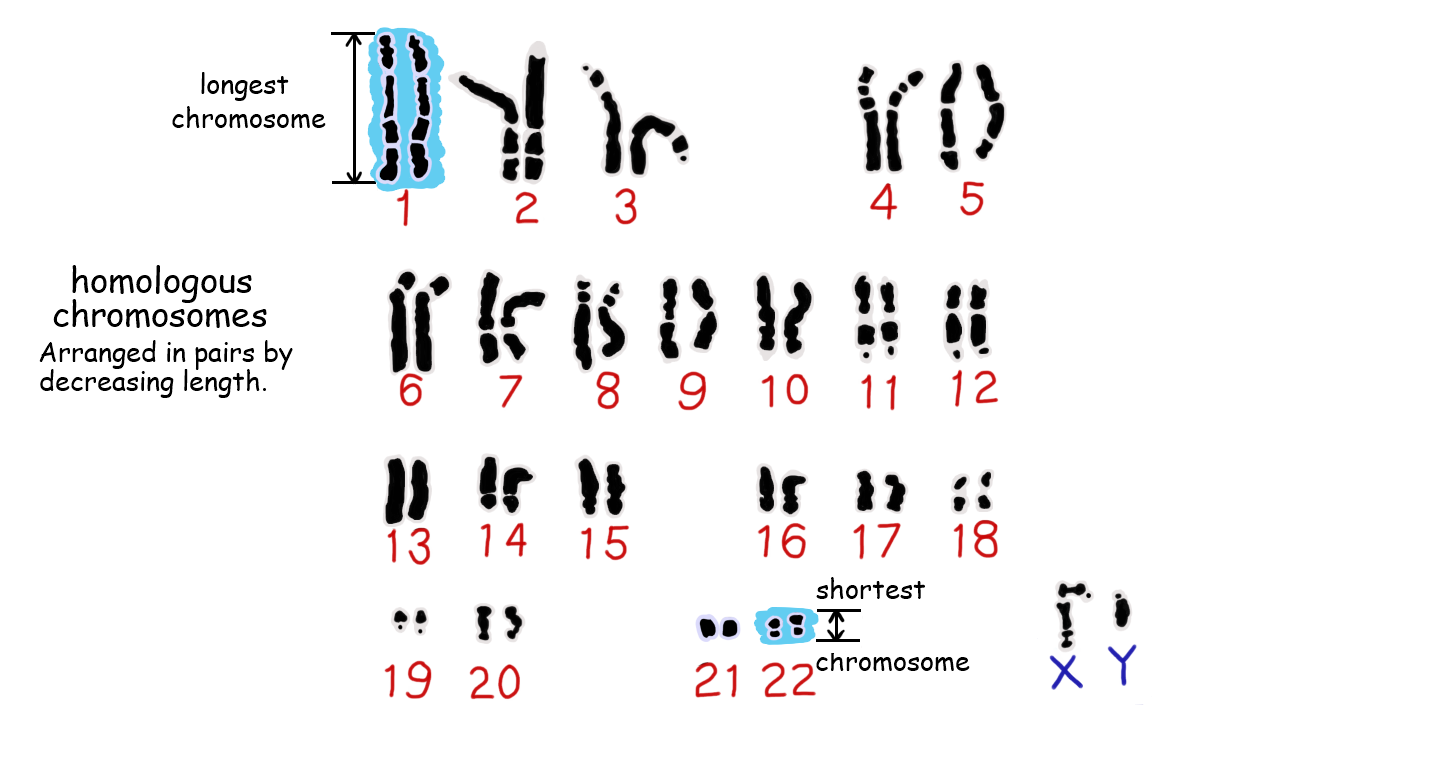 3.2.U10 Sex is determined by sex chromosomes and autosomes are chromosomes that do not determine sex.(Oxford Biology Course Companion page 157).​ 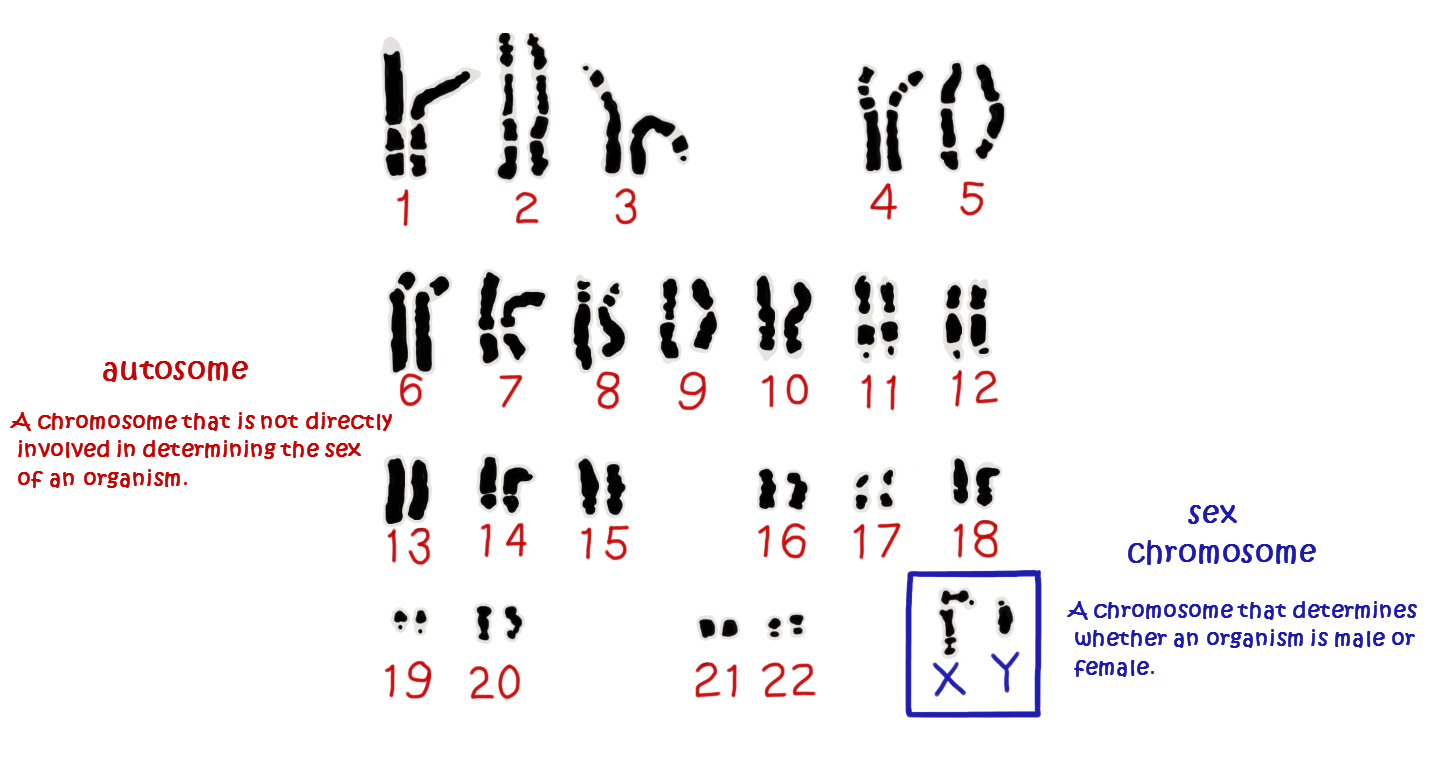 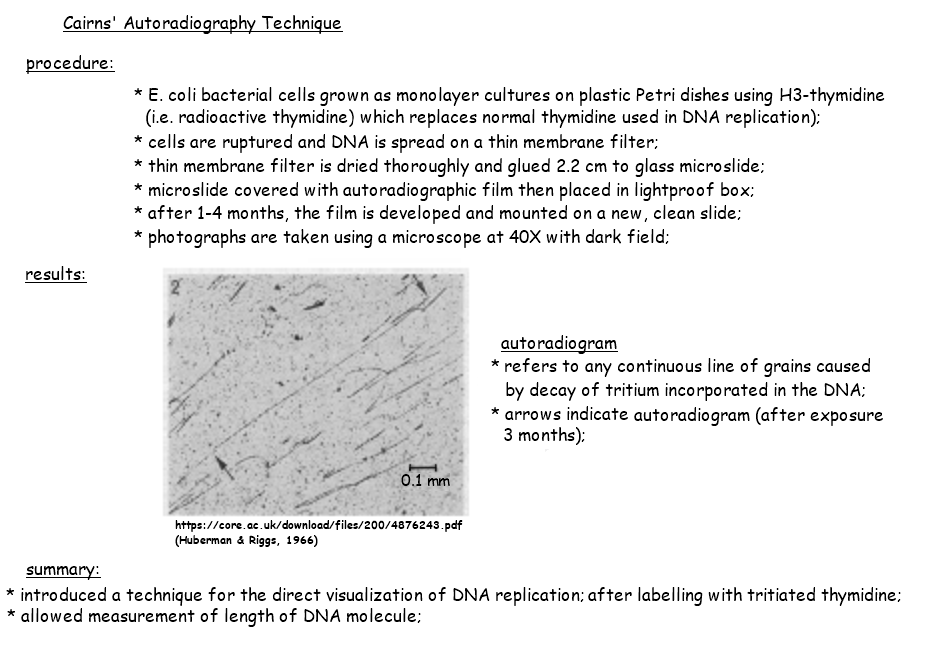 information from IB Biology Help
3.2.A2 Comparison of genome size in T2 phage, Escherichia coli, Drosophila melanogaster, Homo sapiens and Paris japonica.
Genome size can vary greatly between organisms and is not a valid indicator of genetic complexity. The largest known genome is possessed by the canopy plant Paris japonica – 150 billion base pairs. The smallest known genome is possessed by the bacterium Carsonella ruddi – 160,000 base pairs.

As a general rule:

3.2.A3 Comparison of diploid chromosome numbers of Homo sapiens, Pan troglodytes, Canis familiaris, Oryza sativa, Parascaris equorum. (Oxford Biology Course Companion page 155).​
Chromosome number does not provide a valid indication of genetic complexity, for instance:
3.2.A4 Use of karyograms to deduce sex and diagnose Down syndrome in humans (Oxford Biology Course Companion page 158).​
Karyotyping will typically occur prenatally and is used to:

Down syndrome is a condition whereby the individual has three copies of chromosome 21. It is caused by a non-disjunction event in one of the parental gametes. The extra genetic material causes mental and physical delays in the way the child develops 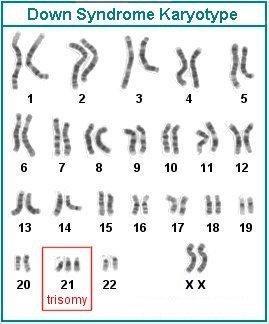 To identify a specific gene locus:

To identify the polypeptide product of a gene:

​Topic 3.2 Review
Powerpoint and notes on Topic 3.2 by Chris Payne
​​​​​​​​​Correct use of terminology is a key skill in Biology. It is essential to use key terms correctly when communicating your understanding, particularly in assessments. Use the quizlet flashcards or other tools such as learn, scatter, space race, speller and test to help you master the vocabulary.
External Links:
Let’s start with a tour of the basics from Learn.Genetics at Utah.
DNA  Coiling To Form Chromosomes
Chromosome Description
Video Tour of Basic Genetics
Click here for additional information on HOW GENES WORK.
Click here for some more information on Sickle Cell
DNA coiling on histone proteins from biostudio.com
A description of chromosomes from Dexter Pratt
Zooming in to Chromosome 11 (a bit too advanced) from the DNA Learning Centre’s Gene Almanac
Transcription Java game from thinkquest.org
How do mutations occur? from the DNAi at the Dolan DNA Learning Centre