image from thinglink.com
In the Digestion Options unit we will expand our knowledge from Topic 6.2 Digestion and Absorption.  Our focus will be on the lining of the digestive tract and how the body controls the functions of the digestive system

Exocrine glands produce and secrete substances via a duct onto an epithelial surface – either:
​
Examples of digestive glands include: 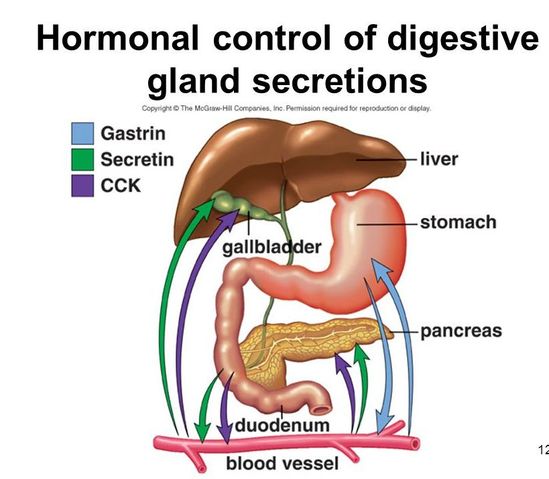 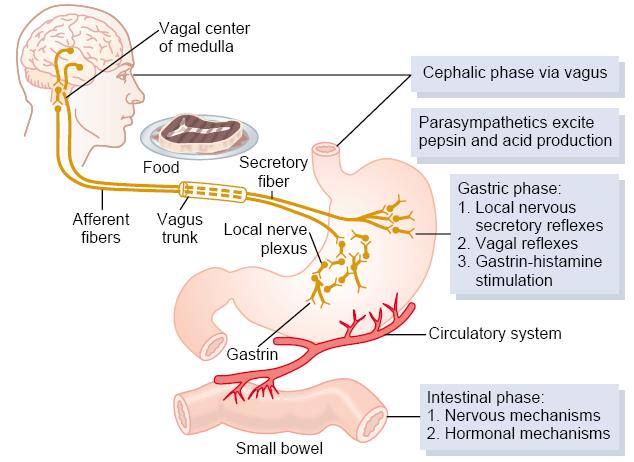 D.2 U 4 ​Acid conditions in the stomach favour some hydrolysis reactions and help to control pathogens in ingested food.
Acid is secreted by the parietal cells of the stomach. The acid disrupts the extracellular matrix that holds cells together in tissues. It also leads to the denaturing of proteins, exposing the polypeptide chains so that the enzyme pepsin can hydrolyse the bonds within the polypeptides. Pepsin is released by chief cells as the inactive pepsinogen. The acid conditions within the stomach convert the inactive pepsinogen to pepsin.. This ensures that the cells that produce pepsinogen are not digested at the same time as the protein in the diet. 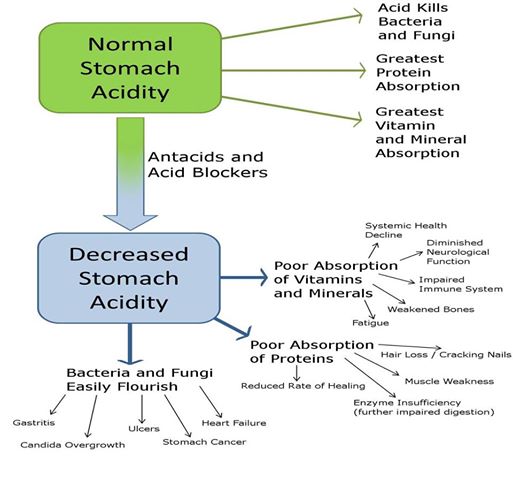 D.2 U 5 ​The structure of cells of the epithelium of the villi is adapted to the absorption of food
The inner surface of the ileum has numerous folds. Each of the folds is covered in tiny projections called villi. Absorption takes place through the epithelial cells covering each villus.

Each epithelial cell covering the villus adheres to its neighbours through tight junctions, which ensure that most materials pass into the blood vessels lining the villi through the epithelial cell. The cell surface membrane on the intestinal lumen side has a number of extensions called microvilli. The collection of microvilli on the intestinal side of the epithelial cells is termed the brush border. The function of the brush border is to increase the surface area for absorption.

Relatively high amounts of ATP are required to drive active transport processes. Thus epithelial cells have large numbers of mitochondria. Pinocytic vesicles are often present in large numbers due to absorption of some foods by endocytosis. 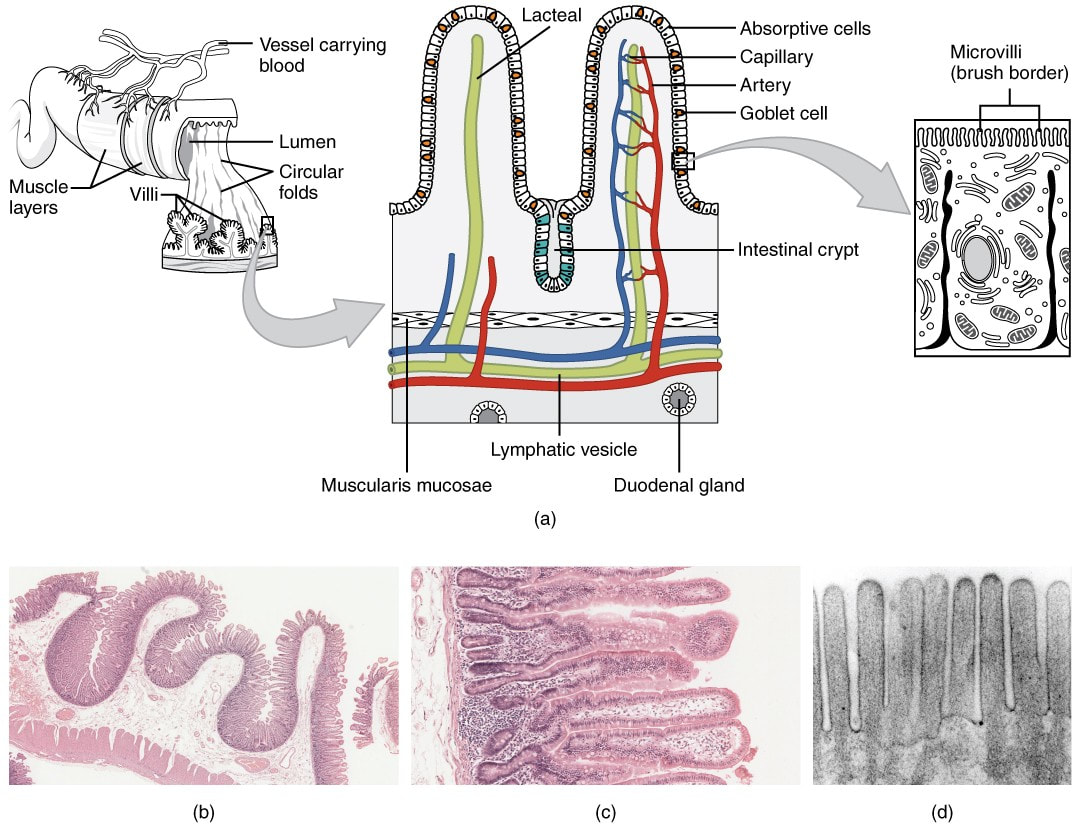 image fromLumen Learning
D.2 U 6​ The rate of transit of materials through the large intestine is positively correlated with their fibre content.
Dietary fibre is material such as cellulose, lignin and pectin that cannot be readily digested. There are two categories of dietary fibre: soluble and insoluble. A healthy balanced diet  contains fibre as it increases the bulk of materials passing through the intestines and helps prevent constipation as it draws water into the intestine. The higher the water content of the intestine, the faster the movement of fecal matter.

There are other possible benefits of fibre in the diet:

D.2 U 7 ​Materials not absorbed are egested.
Dietary fibre is the edible parts of plants that are resistant to being digested and are not absorbed from the small intestine. Examples include cellulose and lignin. As a consequence, there is a fraction of ingested food which never leaves the digestive tube. In addition, secretion into the digestive tube occurs. Some of what is added is excretory products such as bilirubin from the breakdown of red blood cells. A large volume of water is added to the tube in the process of digestion by secretions in the mouth, stomach and small intestine, and has to be reclaimed in the large intestine. The excretory products, the unabsorbed water and undigested dietary fibre are egested as feces

Applications
D.2 A 1 ​The reduction of stomach acid secretion by proton pump inhibitor drugs.
The low pH environment of the stomach is maintained by proton pumps in the parietal cells of the gastric pits. These proton pumps secrete H+ ions (via active transport), which combine with Cl– ions to form hydrochloric acid. Certain medications and disease conditions can increase the secretion of H+ ions, lowering the pH in the stomach.

Proton pump inhibitors are used to treat gastroesophageal diseases with symptoms of low stomach pH. This is used to promote healing of peptic ulcer diseases or gastroesophageal reflux disease (GERD).  Prodrugs bind to the H+/K+ ATPase pump in the apical membrane of the parietal cell irreversibly inhibiting the pumps activity. New proton pumps have to be made in order for acid secretion to resume. the use of these drugs may also encourage the growth of the gut microflora. They may increase the patient's susceptibility to bacterial colonization.

D.2 A 2 ​Dehydration due to cholera toxin.
Vibrio cholerae is a curved rod bacterium. The pathogen is acquired almost exclusively from drinking water contaminated by feces of patients or carriers of the pathogen 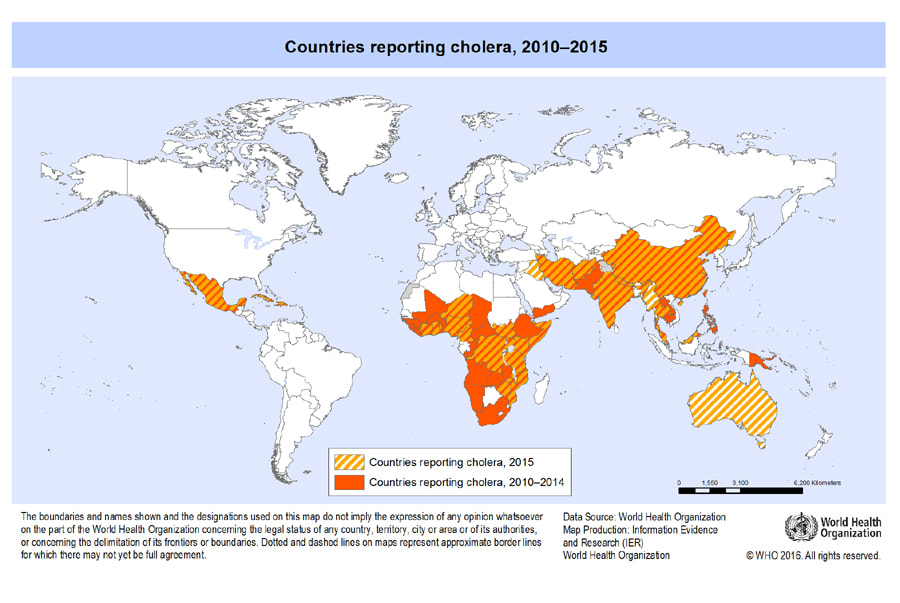 D.2 A 3 Helicobacter pylori infection as a cause of stomach ulcers.
​This is an example of a paradigm shift, where existing ideas of scientists and doctors about the tolerance of bacteria to stomach acid were incorrect in spite of the evidence. Australians Robin Warren and Barry Marshall made the discovery of the role of Helicobacter pylori and stomach acid in the formation of ulcers but struggled to convince the scientific and medical community. 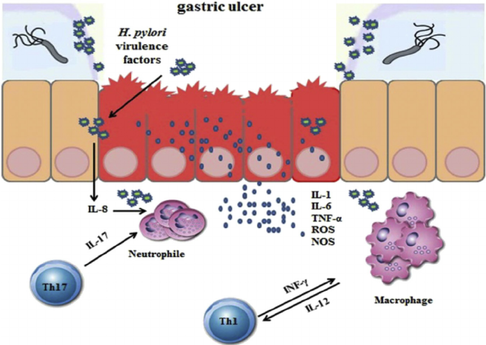 image from Research Gate
Skills
D.2 S 1 ​Identification of exocrine gland cells that secrete digestive juices and villus epithelium cells that absorb digested foods from electron micrographs.
Exocrine glands are composed of a cluster of secretor! cells which collectively! form an acinus. The acini are surrounded b! a basement membrane and are held together by tight junctions between secretor! cells.
The secretor! cells possess a highly! developed ER and golgi network for material secretion and are rich in mitochondria.

Exocrine products are released into a duct, which connects to an epithelial surface.
​These ducts ma! arise from a convergence of smaller ductules (each connected to an acinus) in order to enhance secretion
Exocrine Gland 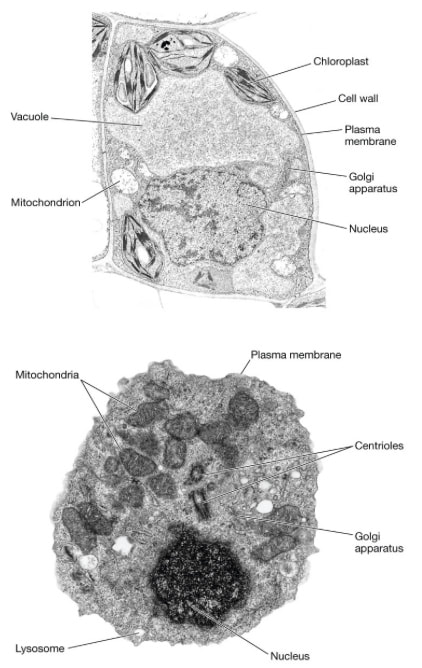 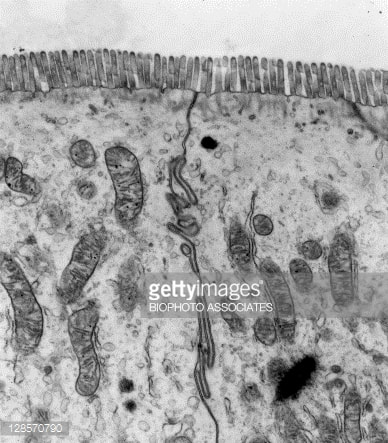 Analyse your lunch with Wolfram|Alpha
​
Facts About Hunger
Hunger Statistics
​
Topic D.2 Review
​​​​​PowerPoint and Notes on Topic D.1 by Christina Reis
​​​​Correct use of terminology is a key skill in Biology. It is essential to use key terms correctly when communicating your understanding, particularly in assessments. Use the quizlet flashcards or other tools such as learn, scatter, space race, speller and test to help you master the vocabulary.
Useful Links

In The News
Gastric cancer: A new strategy used by Helicobacter pylori to target mitochondria - Science Daily, Nov 2017
Acid reflux drug linked to more than doubled risk of stomach cancer – study - Guardian, Oct 2017
Tuning the Tide Against Cholera - New York Times, Feb 2017
​
Video Clips
​An unfortunate accident in June 1822 led to a real breakthrough in the understanding of how the digestive system, and particularly the stomach, works.
​The Journey of the Digestive System'
If you're like us, you love the sound of a brunch buffet. But not everything you eat at that glorious buffet is going to be turned into energy. Your body has to work with different forms of food in different ways. In this episode of Crash Course Anatomy & Physiology, Hank takes us through more about our metabolism including cellular respiration, atp, glycogenesis, and how insulin regulates our blood sugar levels.
​Nachos are great...if you are among the lucky ones whose body can digest them. When digestion goes according to plan, the small intestine performs most of your chemical digestion in the duodenum, while accessory organs including the liver, gallbladder, and pancreas contribute enzymes that all but finish the job. Then your large intestine, which is actually shorter than the small intestine, tries to extract the last bit of nutrition, including the occasional attempt to turn nachos into energy, which for most humans, ends in gassy failure
Ted Ed How The Digestive System Works
Hormonal Regulation of the Secretion of Acids in the Stomach
​Learn the basics about what stomach acid is as part of the acids and bases topic.
The Villi
What Causes Constipation
The following animation details the mechanism of action of proton pump inhibitors (PPIs)
​Cholera is an aggressive bacterial infection that can kill its victims within hours, but how? What exactly does cholera do to our bodies?
​Describes in detail and concisely the pathogenesis of helicobacter pylori infection.
Reference sites