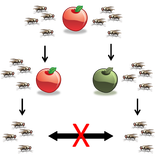 image from Study.com
In the Gene Pools and Speciation unit we will learn some of the reasons why the genetics of a species can change over a long period of time. Charles Darwin's The Origin of Species went into great depth in this matter, and providing substance into the theory of evolution. The key thing to remember about evolution is that it favours more preferable genes in the gene pool, and over time, these preferable characteristics become more exclusive in the gene pool 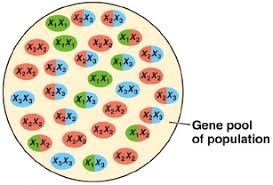 These populations have to be reproductively isolated, thus preventing gene flow between populations. If a population that has a certain allele or characteristic is quite small, random events such as disease or natural disasters can cause a drastic drop in this particular allele 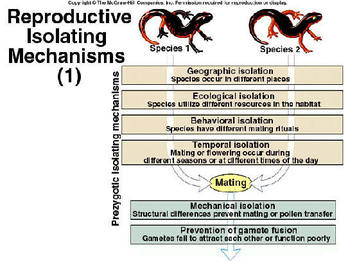 10.3 U 4 ​Speciation due to divergence of isolated populations can be gradual. (Oxford Biology Course Companion page 460)
Speciation can occur gradually over long periods of time, with several intermediate forms in between species leading to today’s current species. This can be seen by some of the more complete fossil records, like the whale. However, in some species, large gaps were evident for certain species in the fossil record. This could be explained by possible imperfections in the fossil record, or perhaps, these species have not been discovered yet.
​
​Species descended from a common ancestor gradually diverge more and more in morphology i.e. become phenotypically different - adaptive radiation, through the slow but relentless effects of natural selection. 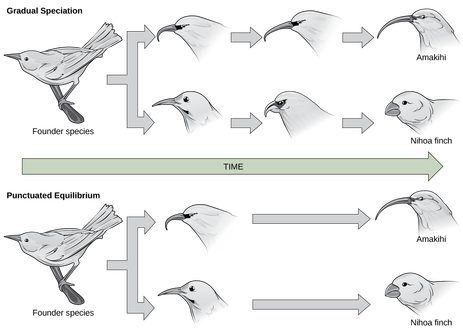 image from Biology LibreTexts
10.3 U 5 ​Speciation can occur abruptly. (Oxford Biology Course Companion page 461)
Formation of new species which is reproductively and ecologically isolated from the parental species.as a result of a genetic mutation such as a sudden change in chromosome number or constitution. Genetic mutations such as non-disjunctions of an entire set of chromosomes can cause a doubling of chromosomes (polyploidy) resulting in a different species. Also interbreeding of two genetically different organisms can produce hybrids which are generally infertile 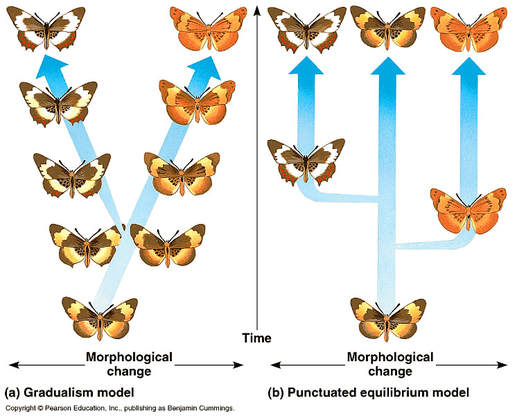 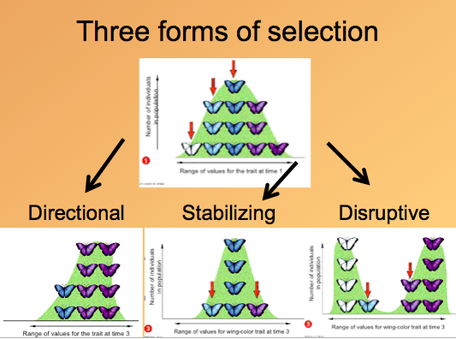 10.3 A 2 ​Speciation in the genus Allium by polyploidy. (Oxford Biology Course Companion page 462)
The genus Allium comprises monocot flowering plants and includes the onion, garlic, chives, scallion, shallot, and the leek. In many of these species of plants, chromosome doubling has occurred naturally and through hybridization or selective breeding to create a large number of different phenotypes. This results in a number of reproductively isolated but similar populations.

Polyploidy is a condition in which an organism has more than two complete sets of chromosomes in all somatic cells i.e. > diploid. It is far more common in plant species as they lack separate sexes and are capable of asexual reproduction (self-pollination). It may occur as a result of the failure of a meiotic cell to undergo cytokinesis (so chromosome replication occurs minus cell division). Consequently, gametes are diploid (2n) and resulting offspring are tetraploid (4n). Because tetraploid offspring can no longer mate with diploid organisms (triploid offspring tend to be infertile), speciation has occurred. 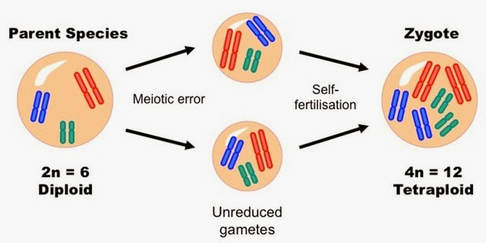 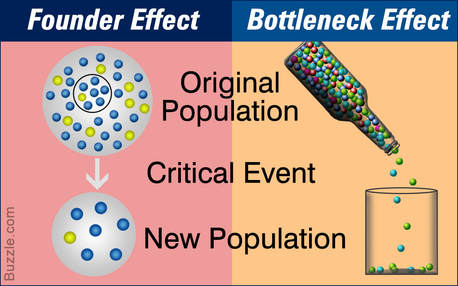 ​Why Should We Care About Species article
PowerPoint and Study Guide on Topic 10.3 by Chris Payne
​​​Correct use of terminology is a key skill in Biology. It is essential to use key terms correctly when communicating your understanding, particularly in assessments. Use the quizlet flashcards or other tools such as learn, scatter, space race, speller and test to help you master the vocabulary.
Useful Links

​In the News
TOK
Video Clips
Anole lizards of the Caribbean islands are members of about 150 closely related species, most of which evolved within the past 50 million years from a single colonizing species. See the evolutionary process firsthand with this compelling case study in evolution.
There is a dizzying diversity of species on our planet. From genetic evidence we know that all of those species evolved from a single ancient ancestor. But how does one species split in to many? Through the evolutionary process of speciation — which begins when populations become isolated by changes in geography or by shifts in behavior so that they no longer interbreed. This video illustrates the speciation process in birds to help you understand the basis of earth's biodiversity.
Hank explains speciation - the evolutionary process by which new biological species arise - in terms of finches, ligers, mules, and dogs
Paul Andersen explains how reproductive isolation can eventually lead to speciation.  Three main barriers to gene flow are included: geographic, pre-zygotic and post-zygotic.  Both allopatric and sympatric speciation are discussed.  A brief discussing of polyploidy and punctuated equilibrium are also included.
Explore speciation with The Amoeba Sisters. This video discusses sympatric and allopatric speciation and covers several types of isolation types including behavioral, temporal, and habitat isolations.
​Process of Evolution | Gradualism vs Punctuated Equilibrium vs Catastrophism
Explore Research at the University of Florida: Pam and Doug Soltis, distinguished professors with the Florida Museum of Natural History, discuss the importance of Tragopogon, a flowering plant in the sunflower family, and its role in helping understand more about the polyploids. Polyploids are organisms with more than two sets of chromosomes and represent a large number of agricultural crops. The Soltises are analyzing Tragopogon to gain a better understanding of the process of genome change and evolution in polyploidy organisms.
In this video Paul Andersen explains the elements in the Hardy-Weinberg equation; including the allele frequency and phenotype frequency. He begins with a brief explanation of phenotypes and genotypes. A sample problem is worked out and another problem is included.
Paul Andersen shows you how to solve simple Hardy-Weinberg problems. He starts with a brief description of a gene pool and shows you how the formula is derived. He then shows you how to solve a couple of sample problems.
Reference sites