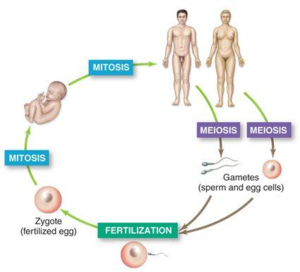 image from Pathwayz
In the Sexual Reproduction unit we will explore gamete formation in both male and female humans. We will then learn how these gametes are fused together to form a zygote and eventually a fetus. We will also look at the hormones that are involved in fetal development. 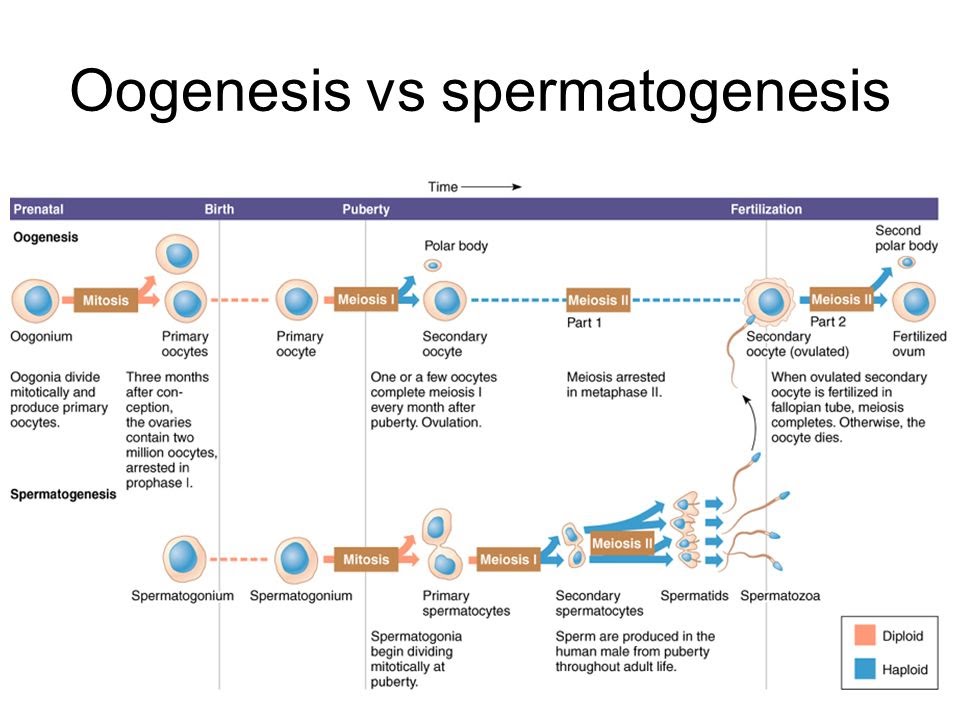 11.4 U 2 ​Processes in spermatogenesis and oogenesis result in different numbers of gametes with different amounts of cytoplasm.

The fertilization process occurs within the body of a female is called internal fertilization. It is a specialization for the protection of egg, but it depends on the birth method . Reptiles and birds have thick shell, covering the egg to protect it from dehydration and destruction. However, fertilization occurs inside the body otherwise, sperm has to enter through a thick wall.

Animals such as mammals also have internal fertilization, where embryo develops inside mother, which enhances the protection to the embryo1.

Internal fertilization facilitates the survival of the embryo, selective fertilization, and longer protection and minimizes the wastage of gametes. 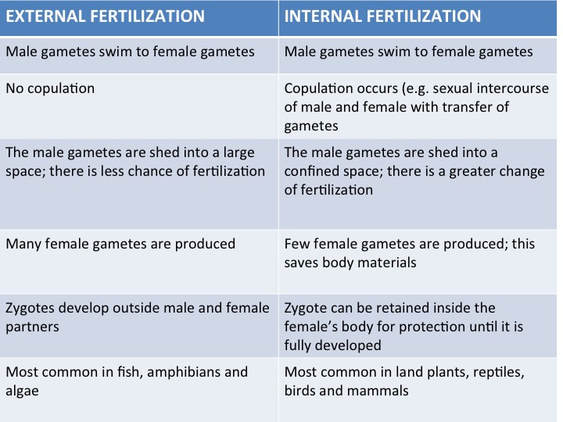 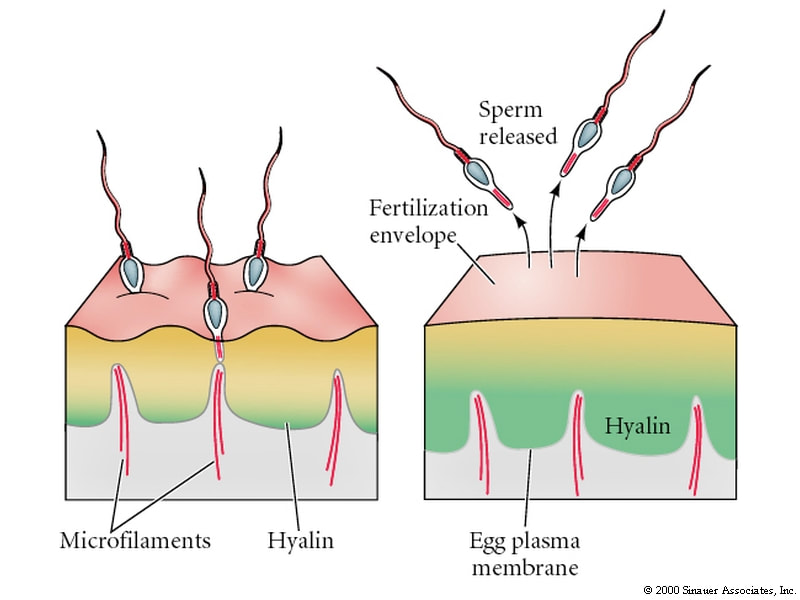 11.4 U 5 ​Implantation of the blastocyst in the endometrium is essential for the continuation of pregnancy.
After the male and the female gametes combine to form a zygote, the zygote divides by mitosis to form a two-cell embryo. They two cells grow and replicate their DNA, and undergo another cell division through mitosis to form a four-cell embryo. As the embryo is developing, it is moving along the fallopian tube towards the uterus.

The four-cell embryo continues to divide by cell division until it reaches 16 to 32 cells; called the morula. After continued cell divisions a blastocyst consisting of 100 to 128 cells is formed and is ready for implantation into the endometrium. 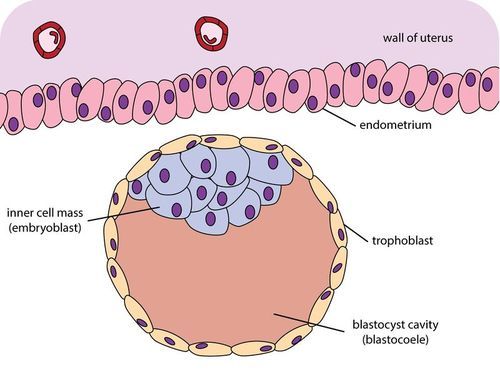 image from The Free Learning Channel
11.4 U 6 ​HCG stimulates the ovary to secrete progesterone during early pregnancy.
When a human embryo is implanted into the endometrium or the uterine lining, it starts to produce the hormone, human chorionic gonadotrophin (HCG).

11.4 U 7 ​The placenta facilitates the exchange of materials between the mother and fetus.
The placenta develops from the trophoblast layer of the blastocyst. When developed three blood vessels contained within umbilical cord connect the placenta to the growing fetus.

Fetal blood that circulates in capillaries within the villi and microvilli is very close to the surface, allowing for efficient exchange of materials between the fetal and maternal blood. Materials such as oxygen, nutrients and vitamins diffuse into the fetal capillaries from the maternal blood in the inter-villous space, while carbon dioxide and wastes diffuse out of the fetal capillaries into the inter-villous space. One umbilical vein carries oxygenated and nutrient rich blood back to the fetus from the placenta.

The cells that separate the fetal and maternal blood form a semi-permeable placental barrier. Materials are exchanged between the maternal and the fetal blood in the placenta.

Note: maternal and fetal blood is never mixed together. 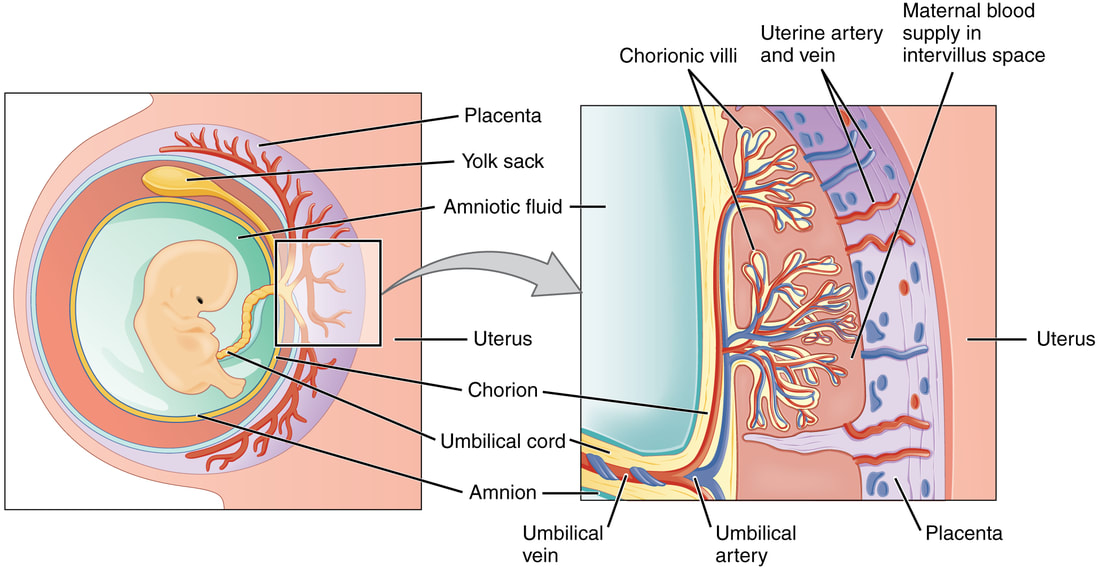 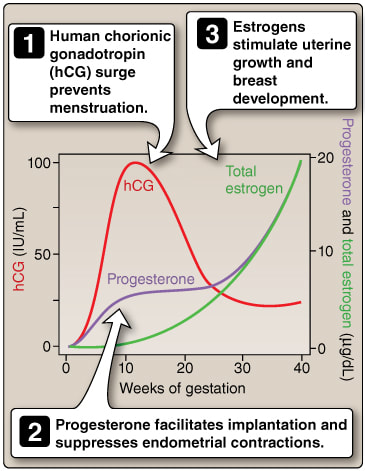 11.4 U 9 Birth is mediated by positive feedback involving estrogen and oxytocin.
When the pregnancy is at term, the fetus secretes hormones that signal the placenta to stop producing progesterone (progesterone inhibits the secretion of oxytocin by the pituitary gland). Oxytocin secreted by the anterior pituitary gland stimulates the muscle fibers in the uterus to begin to contract. As the muscles in uterus contract, mechanoreceptors in the uterine wall signal the pituitary to produce more oxytocin. More oxytocin increases the frequency and intensity of the contractions, thus stimulating the production of even more oxytocin. This is an example of positive feedback.

Contractions of the muscles of the uterus will cause the amniotic sac to break, releasing the amniotic fluid (This is when the “water breaks” in childbirth). Relaxation of the muscles in the cervix causes it to dilate, eventually allowing the increasing contractions to push the baby out through the vagina and the cervix. he placenta is expelled “afterbirth” about 15 minutes after the baby is born. 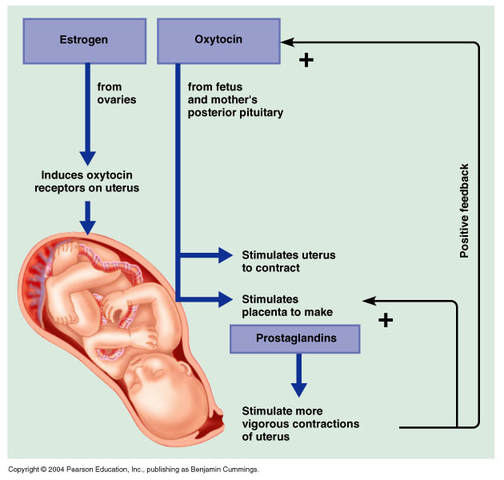 ​Applications
11.4 A 1 ​The average 38-week pregnancy in humans can be positioned on a graph showing the correlation between animal size and the development of the young at birth for other mammals.
There is a correlation with animal size (mass) and the development of their young (viewed as length of gestation period). In many cases, the longer the gestation period, the greater the mass size and development at birth. Species of mammals that give birth to smaller, immature and somewhat helpless offspring are called altricial species. Species of mammals that give birth to more mature offspring that are generally larger, have their eyes open at birth and are immediately mobile. These offspring are precocial. 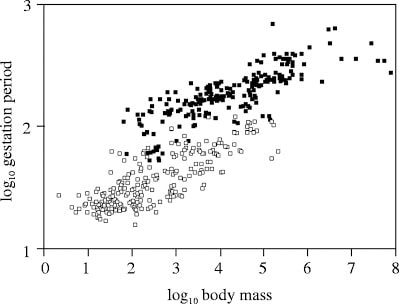 Skills
11.4 S 1 Annotation of diagrams of seminiferous tubule and ovary to show the stages of gametogenesis.
The process of gametogenesis occurs in the reproductive organs (gonads) of the male and female
11.4 S 2 ​Annotation of diagrams of mature sperm and egg to indicate functions.
The male and female reproductive gametes (sperm and egg) have specialised structures which reflect their functions 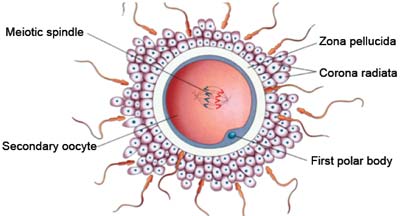 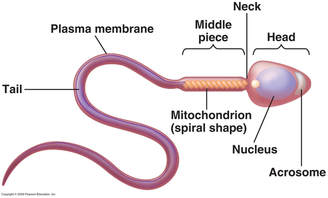 Topic 11.4 Review
​​​​​PowerPoint and Notes on Topic 11.4 by Chris Payne
​​​​Correct use of terminology is a key skill in Biology. It is essential to use key terms correctly when communicating your understanding, particularly in assessments. Use the quizlet flashcards or other tools such as learn, scatter, space race, speller and test to help you master the vocabulary.
Useful Links