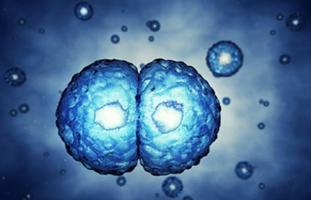 In the Cell Cycle unit you will learn about the function and process of  mitosis. Emphasis is placed on key checkpoints of the cell cycle, at  which cancer cells behave differently that noncancerous cells.

​The unit  is planned to take 3 school days.
​Essential idea:
​Nature of science:
Understanding:
​1.6.U.1 Mitosis is division of the nucleus into two genetically identical daughter nuclei (Oxford Biology Course Companion page 51). [The sequence of events in the four phases of mitosis should be known. To avoid confusion in terminology, teachers are encouraged to refer to the two parts of a chromosome as sister chromatids, while they are attached to each other by a centromere in the early stages of mitosis. From anaphase onwards, when sister chromatids have separated to form individual structures, they should be referred to as chromosomes.]​
​What is (and is not) mitosis?

There are four key reasons why a cell may be required to divide mitotically:
Mitosis is nuclear division plus cytokinesis, and produces two identical daughter cells during prophase, prometaphase, metaphase, anaphase, and telophase. Interphase is often included in discussions of mitosis, but interphase is technically not part of mitosis, but rather encompasses stages G1, S, and G2 of the cell cycle.
​​Interphase 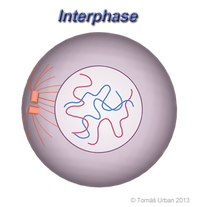 The cell is engaged in metabolic activity and performing its prepare for mitosis (the next four phases that lead up to and include nuclear division). Chromosomes are not clearly discerned in the nucleus, although a dark spot called the nucleolus may be visible. The cell may contain a pair of centrioles (or microtubule organizing centers in plants) both of which are organizational sites for microtubules.

This phase of the cell cycle is a continuum of three distinct stages:
​Cell cycle checkpoints are mechanisms within Interphase that ensure the fidelity and continued viability of mitotic division in cells
Prophase 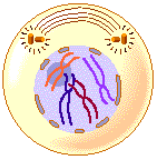 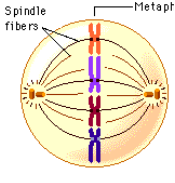 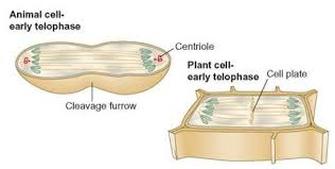 Cell Division Animation
1.6.U.2 Chromosomes condense by supercoiling during mitosis (Oxford Biology Course Companion page 52).​
Chromatins are loosely packed DNA within the nucleus. In this unravelled form, the DNA is accessible to transcriptional machinery and so genetic information can be translated DNA is organised as chromatin in all non-dividing cells and throughout the process of interphase.

During mitosis chromosomes (tightly wounded strands of DNA) condense prior to division in a process called supercoiling. In this condensed form, the DNA is able to be easily segregated however is inaccessible to transcriptional machinery. Since a nucleus is generally less than 5 µm in diameter and some of the DNA molecules are over 50,000 µm in length.

DNA is organised as chromosomes during the process of mitosis (condense in prophase, decondense in telophase). A chromosome is visible during mitosis (via microscopy)

As the DNA is replicated during the S phase of interphase, the chromosome will initially contain two identical DNA strands. These genetically identical strands are called sister chromatids and are held together by a central region called the centromere. When these chromatids separate during mitosis, they become independent chromosomes, each made of a single DNA strand. 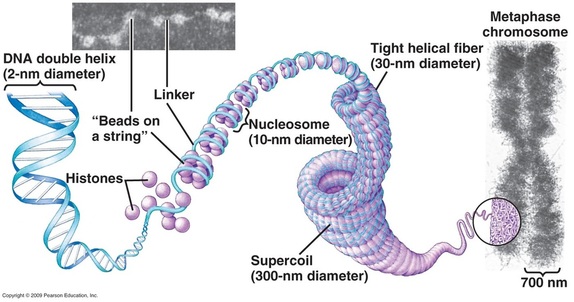 These key processes include: 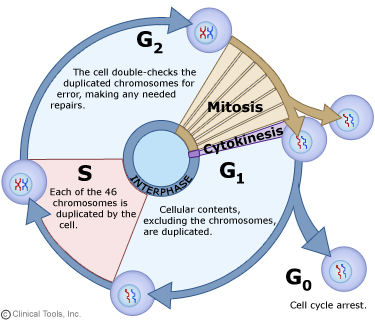 ​1.6.U.4 Cytokinesis occurs after mitosis and is different in plant and animal cells  (Oxford Biology Course Companion page 52).​

Cytokinesis is the process of cytoplasmic division, whereby the cell splits into two identical daughter cells. Cytokinesis occurs concurrently with the final stage of mitosis (telophase) and is different in plant and animal cells 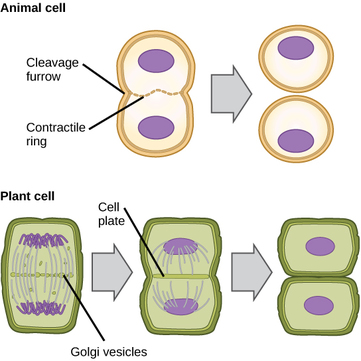 image from www.boundless.com
​1.6.U.5 Cyclins are involved in the control of the cell cycle (Oxford Biology Course Companion page 56).​
Cyclins are a family of regulatory proteins that control the progression of the cell cycle. Cyclins activate cyclin dependent kinases (CDKs), which control cell cycle processes through phosphorylation

When a cyclin and CDK form a complex, the complex will bind to a target protein and modify it via phosphorylation
The phosphorylated target protein will trigger some specific event within the cell cycle (e.g. centrosome duplication, etc.). After the event has occurred, the cyclin is degraded and the CDK is rendered inactive again.

There are 4 main types of cyclin in human cells.

Cyclin concentrations need to be tightly regulated in order to ensure the cell cycle progresses in a proper sequence. Different cyclins specifically bind to, and activate, different classes of cyclin dependent kinases
Cyclin levels will peak when their target protein is required for function and remain at lower levels at all other time
​1.6.U.6 Mutagens, oncogenes and metastasis are involved in the development of primary and secondary tumours (Oxford Biology Course Companion page 57).​
Tumors are the result of uncontrolled cell division, which can occur in any organ or tissue. Many of these cells can commonly avoid immune detection as they are not foreign bodies but abnormally functioning body cells. These abnormal growths can either be localized (primary tumours), meaning they do not move to other part of your body. These tumours are benign. If the cancer cells detach and move elsewhere into the body (secondary tumours), they are called malignant and are more life-threatening. Diseases due to malignant tumours are known as cancer.

Cancer is usually caused by genetic abnormalities due to a variety of different sources called carcinogens or due to inheritance or errors in DNA replication. Carcinogens are agents that can cause cancer, such as viruses, X-Rays, UV Radiation and many chemical agents. Mutagens are agents that can cause mutations in one’s DNA which can lead to cancer. Mutagens and carcinogens are strongly correlated and many mutagens can be carcinogens
Mutagens may be physical, chemical or biological in origin:
In cancer two types of genes are usually affected, oncogenes and tumor suppressor genes.
Tumour cells may either remain in their original location (benign) or spread and invade neighbouring tissue (malignant). Metastasis is the spread of cancer from one location (primary tumour) to another, forming a secondary tumour. Secondary tumours are made up of the same type of cell as the primary tumour – this affects the type of treatment required. 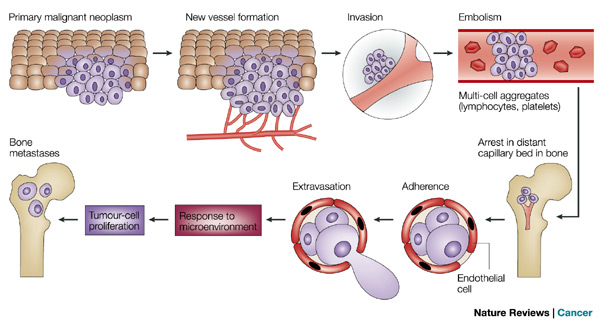 Cell Cycle and Cancer Animation
Application:
​1.6.A.1 The correlation between smoking and incidence of cancers (Oxford Biology Course Companion page 57).​
​A significant body of scientific literature exists which provides a strong link between smoking and the incidence of cancers. Cigarette smoke contains over 4,000 chemical compounds, over 60 of which are known to be carcinogenic

There is a strong positive correlation between smoking and cancer (A correlation is a relationship between two variable factors). Surveys have shown that the more cigarettes that one smokes per day, the higher the death rate due to cancer. The main cancers involved are cancer of the mouth, pharynx, larynx, esophagus and lungs

​What do the graphs indicate regarding the correlation between smoking and lung cancer? 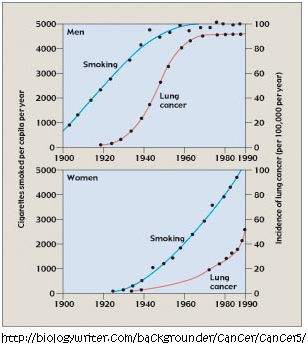 There is a positive correlation. However, correlation does not mean causation. Increase in lung cancer is observed in both men and women.

An increase in the number of cigarettes smoked per year leads to an increase in the incidence of lung cancer. Avoiding exposure to cigarette smoke reduces the chance of getting cancer.
Skills:
​1.6.S.1 Identification of phases of mitosis in cells viewed with a microscope or in a micrograph (Oxford Biology Course Companion page 52). [Preparation of temporary mounts of root squashes is recommended but phases in mitosis can also be viewed using permanent slides.]​ 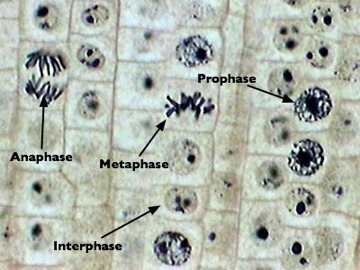 ​​The mitotic index is a measure of the proliferation status of a cell population (i.e. the proportion of dividing cells). The mitotic index may be elevated during processes that promote division, such as normal growth or cellular repair 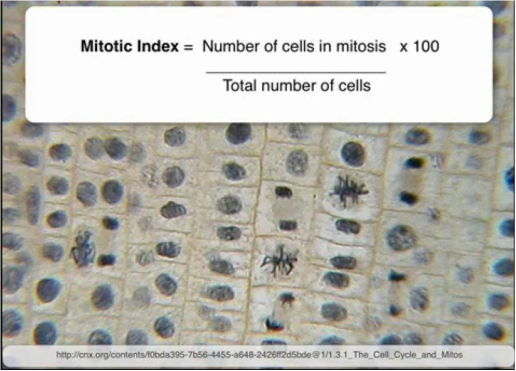 Topic 1.6 Review Notes
​
Topic 1.6 Kahoot Review Quiz
PowerPoint and Notes for Subtopic 1.6 from Chris Payne
Correct use of terminology is a key skill in Biology. It is essential to use key terms correctly when communicating your understanding, particularly in assessments. Use the quizlet flashcards or other tools such as learn, scatter, space race, speller and test to help you master the vocabulary.
Useful Links:

News:
Correlation-cause conundrum: Link between contraceptive pill use in women and prostate cancer in men.
Ageing reversed in mice, using telomerases, from the Guardian
How do stem cells know which specialized cells to become? Check out this really cool new technique which allows researchers to track the path of individual cells in real time in embryos
Killer T-Cell Discovery Could Mean ‘Universal’ Cancer Treatment - Geek.com, Jan.21.2020
​International-mindedness
TOK
Video Clips:
Chromosome and Kinetochore
​Hank describes mitosis and cytokinesis - the series of processes our cells go through to divide into two identical copies.
​Paul Andersen describes the process of mitosis. He begins by discussing the importance of the cell cycle in development, regeneration, asexual reproduction and wound healing. He differentiates between haploid and diploid cells and describes the structure of the chromosome. He then moves through all the phases of mitosis; interphase, prophase, metaphase, anaphase, telophase and cytokinesis.
Stages of Mitosis, a promotional piece, begins with a fly-through of cells preparing to undergo mitosis (cell division).
Video clips on cancer
Cancer usually begins with one tumor in a specific area of the body. But if the tumor is not removed, cancer has the ability to spread to nearby organs as well as places far away from the origin, like the brain. How does cancer move to these new areas and why are some organs more likely to get infected than others? Ivan Seah Yu Jun explains the three common routes of metastasis.
Why Don't We All Have Cancer
​This video about chemotherapy, created by Nucleus Medical Media, depicts normal cell division, apoptosis, tumor cell formation, tumor development, and angiogenesis of a tumor. It describes the cause of tumor cell formation at the genetic level with DNA, and metastasis through blood and lymph vessels. This animation covers the various effects of chemotherapy: cancer cell death, tumor death, destruction of normal cells and tissue. It also covers the side effects associated with chemotherapy treatments. Also described are related treatments, such as, radiation, pills, capsules, liquids, intravenous injections, surgical procedures, catheterization, CSF injection, wafter placement, and schedule of treatments.
David Agus explains, cancer treatments have had a short-sighted focus on the offending individual cells. He suggests a new, cross-disciplinary approach, using atypical drugs, computer modeling and protein analysis to treat and analyze the whole body.
This animation explores Fas signal transduction pathway that induces apoptosis. The animation was published in the journal Science (Molecular Animation of Cell Death Mediated by the Fas Pathway, Sci. STKE 2007 (380).
Reference sites