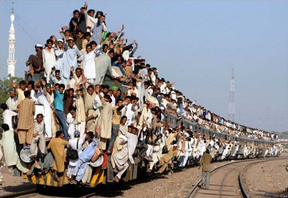 Demography is the study of the statistical characteristics of human populations, e.g. total size, age and sex composition ad changes over time with variations in birth and death rates.

In this unit we will measure population density, look at various population models.

​This unit is a minimum of 5 hours.
Significant Ideas:
Big questions:
Knowledge and understanding:
8.1.U1 Demographic tools for quantifying human population include crude birth rate (CBR) crude death rate (CDR), total fertility rate (TFR), doubling time (DT) and natural increase rate (NIR)
[Strengths and weaknesses of the use of a fossil fuel, of a renewable source of energy, and of nuclear power should be considered.] 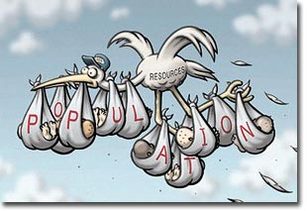 ASBR- Age-specific birth rate is the number of births per 1000 women of any specific year group.

Natural Increase:
8.1.U2 Global human population has followed a rapid growth curve, but there is uncertainty as to how this may be changing. 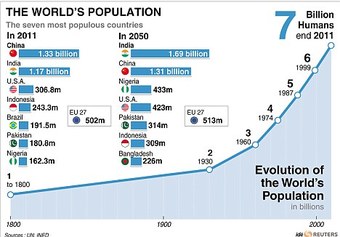 Exponential growth or geometric growth is when the population is growing, and there are no limiting factors slowing the growth. The impacts of exponential growth are huge amount of extra resources needed to feed, house, clothe and look after the increasing number of people.

The world’s population is increasing very fast, this is due to many factors such as education, health, poverty, place of residence, and social class. Population growth is more common in Less economically developed countries ( LEDCs ) as they are less educated, and believe they need more children to help them make a living and take care of them in the future. Around 95% of population growth is happening in the LEDCs.

Governments have tried to reduce the population growth rate by proving health care as well as education and through policies e.g. China: One-child policy

More economically developed countries (MEDCs) believe they cannot raise children with a low income which means they only have children if it does not affect their standard of living. This shows us one more time that reducing birth rates in LEDCs can only be done by improving the standard of living in those countries. 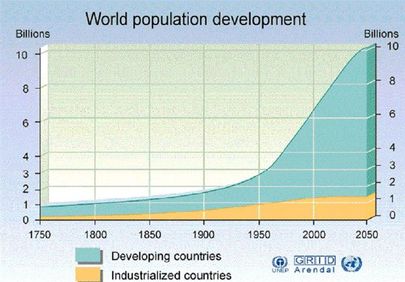 8.1.U3 As human population grows, increased stress is placed on all of the Earth's systems. 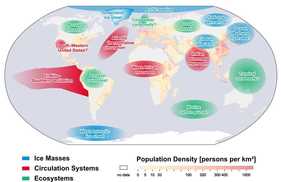 image from https://www.pik-potsdam.de
Like all living organisms, humans exploit their surroundings for resources. Before the beginning of agriculture about 10,000 years ago, small groups of humans wandered across large areas, hunting and gathering just enough food to stay alive. Population numbers were kept low because of the difficulty of finding food.

Fossil Fuels
The burning of fossil fuels leads to an increase in sulfur dioxide in the atmosphere, which causes acid rain. Acid rain has devastating consequences on biodiversity as many plants and animal species cannot survive these conditions. As the rain becomes more acidic, biodiversity decreases.
Sewage

If untreated sewage is released into rivers it provides food for bacteria, which will increase in numbers and use up the oxygen supply of the water. This results in a decrease in species diversity since only species that can live in areas with low oxygen concentrations will survive.

This can result in habitat destruction, a reduction in soil fertility and poor soil structure leading to a decrease in biodiversity.

This decreases biodiversity as only species that can survive in a dry habitat will remain in these areas. 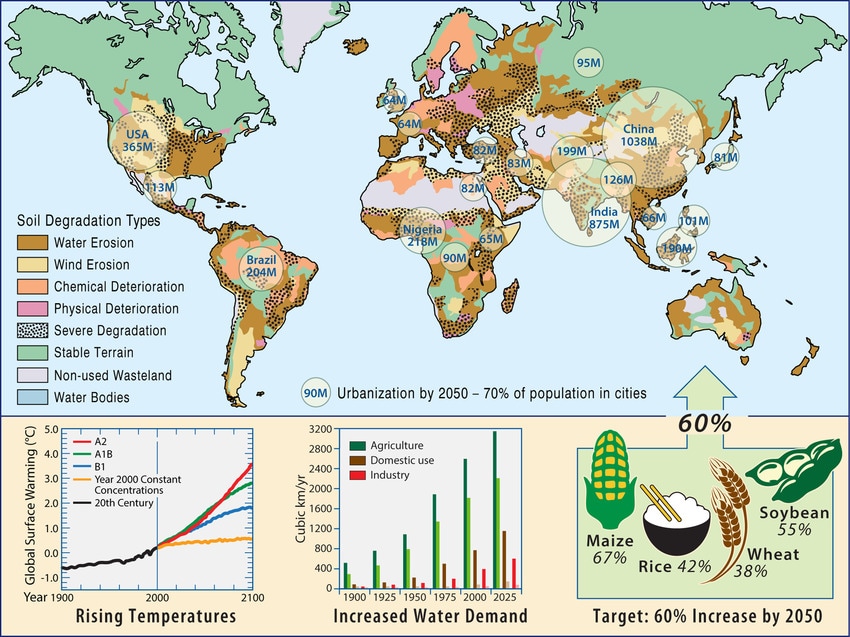 image from https://www.researchgate.net
8.1.U4 Age-gender pyramids and demographic transition models (DTM) can be used in the prediction of human population growth. The DTM is a model that shows how a population transitions from a pre-industrial stage with high CBRs and CDRs to an economically advanced stage with low or declining CBRs and low CDRs.
[A variety of predictive models could be included, such as computer simulations, statistical and/or demographic tables for LEDCs and MEDCs, age–gender pyramids, and graphical extrapolation of population curves.]
The shapes of the pyramids are following:

DTM- Demographic transition model shows us that countries progress through recognized stages in the transition from LEDC to MEDC. It suggests that death rates fall before birth rates and that the total population expands 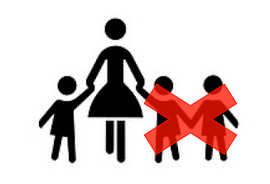 Some analysts believe that birth rates will come down by themselves as economic welfare improves and that the population problem is therefore better solved through policies to stimulate economic growth. 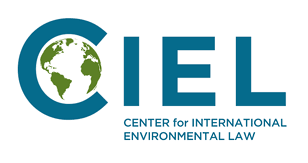 The NIR was 1.3 % during the first decade of the 21st century, hit its all-time high of 2.2 % in 1963, slowly fell throughout the latter part of the century, and has declined sharply during the past decade.  Although the NIR is lower now than in the 1960’s, the number of people being added to the population is still larger because there is a larger base number to multiply the percentage with.  Virtually 100% of the natural increase is located in LDC’s, primarily sub-Saharan Africa.  The TFR has dropped dramatically in MDC’s, normally hovering around 2, and has exceeded 6 in some African countries.  Just as the NIR, TFR, CBR, and CDR, the IMR is also highest in LDC’s, again primarily in Sub-Saharan Africa.  Only life expectancy and doubling time are higher in MDC’s.
8.1.A2 Analyse age-gender pyramids and diagrams showing demographic transition models. 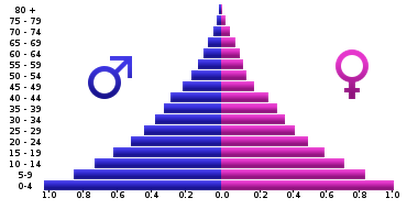 image from en.wikipedia.org
Population pyramids are structures which show any measurable characteristic of the population; like sex, age, language, religion and occupation.
8.1.A4 Discuss the use of models in predicting the growth of human populations. 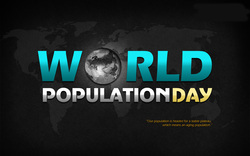 This might include computer simulations, statistical and/or demographic tables for LEDCs and MEDCs, age/sex pyramids and graphical extrapolation of population curves..

Many factors affect population growth. National or regional change in population count migration whereas a global population change does not even consider migration.

Factors influencing birth rates include: population age-structure, women status, type of economy, wealth, religion, social pressure, educational status, availability of contraceptives, desire for children, and the need for governmental policies such as child benefits. It is very difficult to predict the populations birth rate changes in all of these factors.

Death rate is influenced by: age-structure of the population, availability of clean water, sanitation, adequate housing, reliable food supply, prevalence of disease, provision of healthcare facilities, type of occupation, natural hazards, civil conflict/war, and chance factors. This is also difficult to predict changes for as there is too many factors.

This has been discussed between academics and politicians. They keep coming to these 3 conclusions:


Biggest part of the solution lies in:
8.1.A5 Explain the nature and implications of growth in human populations
The human population is growing exponentially using much of the the Earth’s finite resources, such as fossil fuels and minerals. As a result, the amount of waste and pollution is also on the rise. Certain living organisms act as indicator species, and their presence or absence shows the level of pollution in the air or water. Human populations are in the form of a ​J-curve currently peaking at 9 billion. Due to the increased population large amounts of resources needed to fuel population growth.

Many areas of Europe have a low fertility rate because of the following reasons: education. In 1939, the French passed the “Code de la famille”, a complex piece of pro natalist legislation. ​The pro natalist methods in the policy included:

China instilled an anti natalist policy to help combat population explosion. Imbalances between population and available resources were steadily increasing. China has 7% of the world’s agricultural land and 23% of the world’s population.
The idea was to encourage economic development and improve the standard of living for the population.
8.1.A7 Discuss the cultural, historical, religious, social, political and economic factors that influence human population dynamics.
Key Terms
While many of the more economically developed countries (MEDCs) have a declining population size, that of many of the less economically developed countries (LEDCs) is rising rapidly. The position of various countries on the demographic transition model reflects their development stages. 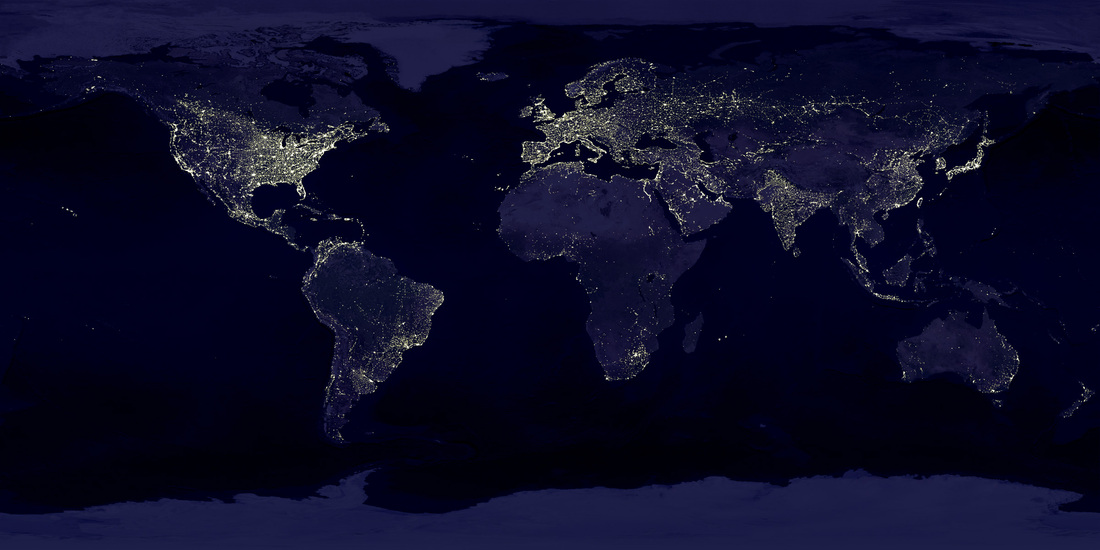 China
Thailand
France
Singapore
Sweden
​Japan
Powerpoint and Notes Adapted from Brad Kremer
​​​​​​​​​Correct use of terminology is a key skill in ESS. It is essential to use key terms correctly when communicating your understanding, particularly in assessments. Use the quizlet flashcards or other tools such as learn, scatter, space race, speller and test to help you master the vocabulary.

In The News
Seven Billion and Counting - BBC News 21 October 2011
The Growth of Megacities - National Geographic 17 Feb 2014
Global Demographic Trends - International Monetary Fund Sep 2006
Over-populated or under-developed? The real story of population growth - Guardian 28 Jun 2016
International-mindness:
TOK
Videos
​It's tough to know what happened on Earth thousands of years before anyone started writing anything down. But thanks to the amazing work of anthropologists and paleontologists like those working on National Geographic's Genographic Project, we can begin to piece together the story of our ancestors. Here's how early humans spread from East Africa all around the world.
Imagine aliens land on Earth a million years from now. What will these curious searchers find of us? They will find what geologists, scientists, and other experts are increasingly calling the Anthropocene, or new age of mankind.
The world's population will grow to 9 billion over the next 50 years -- and only by raising the living standards of the poorest can we check population growth. This is the paradoxical answer that Hans Rosling unveils
It was just over two centuries ago that the global population was 1 billion — in 1804. But better medicine and improved agriculture resulted in higher life expectancy for children, dramatically increasing the world population, especially in the West.
If being alive on Earth were a contest, humans would win it hands down. We're like the Michael Phelps of being alive, but with 250,000 times more gold medals. Today Hank is here to tell us the specifics of why and how human population growth has happened over the past hundred and fifty years or so, and how those specifics relate to ecology
​Paul Andersen explains how populations grow
Paul Andersen explains how populations experience exponential. He begins by address the major players; N (population size) and r (growth rate). He models population growth in rabbits through four generations. He then shows you how to use a spreadsheet and then algebra to predict future populations.
About 10,000 years ago, hunter-gatherers, aided by rudimentary agriculture, moved to semi-permanent villages and never looked back. With further developments came food surpluses, leading to commerce, specialization and, many years later with the Industrial Revolution, the modern city. Vance Kite plots our urban past and how we can expect future cities to adapt to our growing populations.
Population statistics are like crystal balls -- when examined closely, they can help predict a country's future (and give important clues about the past). Kim Preshoff explains how using a visual tool called a population pyramid helps policymakers and social scientists make sense of the statistics, using three different countries' pyramids as examples.
​In this video Paul Andersen explains how humans are impacting the Earth through farming, mining, pollution and climate change. According to the NGSS wise management can reduce impacts on the planet. This will become more important as developing countries start consuming more resources
​DON'T PANIC — Hans Rosling showing the facts about population
In a very short amount of time the human population exploded and is still growing very fast. Will this lead to the end of our civilization?