​Topic 11.3: The Kidney and Osmoregulation

image from National Institute of Diabete
In the Kidneys and Osmoregulation unit we will learn how the kidney's maintain homeostasis, the ability of the body to maintain a stable internal environment despite a changing environment. We will learn how the kidneys maintain the volume of body fluids., maintain the balance of salt ions in body fluids and excrete harmful nitrogen-containing molecules, such as urea, ammonia, and uric acid. We will also learn what happens when the kidney does not function properly.

​This unit will last 4 school days.
​Essential idea:
Nature of science:
Understandings
11.3 U 1 ​Animals are either osmoregulators or osmoconformers.
Osmolarity refers to the solute concentration of a solution 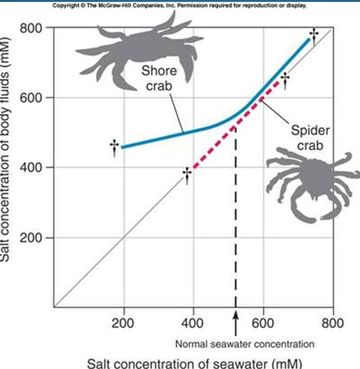 11.3 U 2 ​The Malpighian tubule system in insects and the kidney carry out osmoregulation and removal of nitrogenous wastes.
Osmoregulation is a form of homeostasis whereby the concentration of hemolymph, or blood in the case of animals with closed circulatory systems, is kept within a certain range. When animals break down amino acids, the nitrogenous waste product is toxic and needs to be excreted.

Arthropods have circulating fluid, known as hemolymph, that combines the characteristics of tissue fluid and blood. In insects, the waste product is usually in the form of uric acid and in mammals it is in the form of urea. Insects have tubes that branch off from their intestinal tract. These are known as Malpighian tubules.

Ultrafiltration is the non-specific filtration of the blood as it enters the Bowman’s capsule of the kidney in which hydrostatic pressure created by the high pressure in the glomerulus (capillaries) forces a liquid against a semi-permeable membrane.
The glomerulus:
There are three main parts to the ultrafiltration system:

Sodium ions:
Chloride ions:
Glucose:
By the end of the proximal tubule all glucose and amino acids and 80% of the water, sodium and other mineral ions have been absorbed. 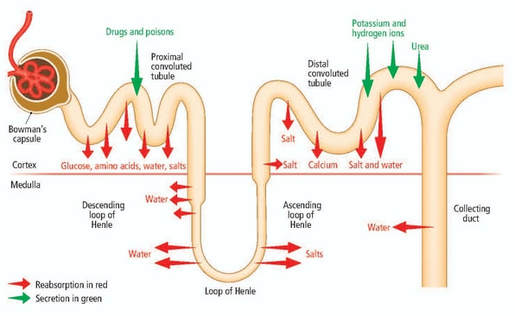 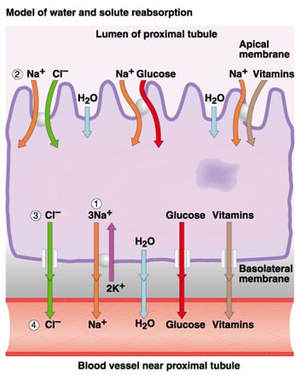 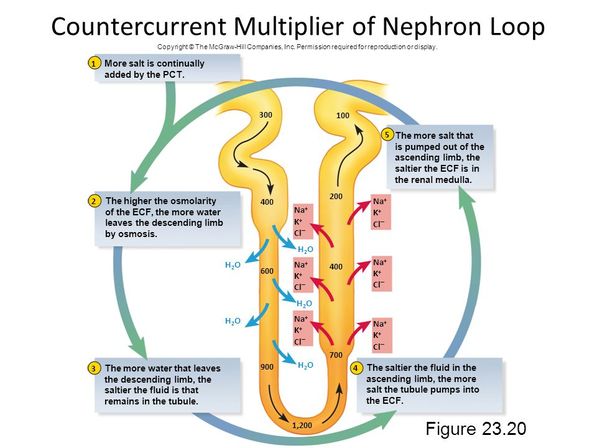 Hormonal Control Animation
11.3 U 8 ​The length of the loop of Henle is positively correlated with the need for water conservation in animals
The longer the loop of henle, the more water will be reabsorbed. Therefore, animals that live in dry habitats such as the desert have a long loop of Henle. This means the medulla of the kidney is also thicker

11.3 U 9 ​The type of nitrogenous waste in animals is correlated with evolutionary history and habitat.
When animals breakdown amino and nucleic acids, nitrogenous waste is formed in the form of ammonia. Ammonia is highly basic, toxic and can be very reactive. Marine and freshwater organisms can release the ammonia directly into the surrounding water. 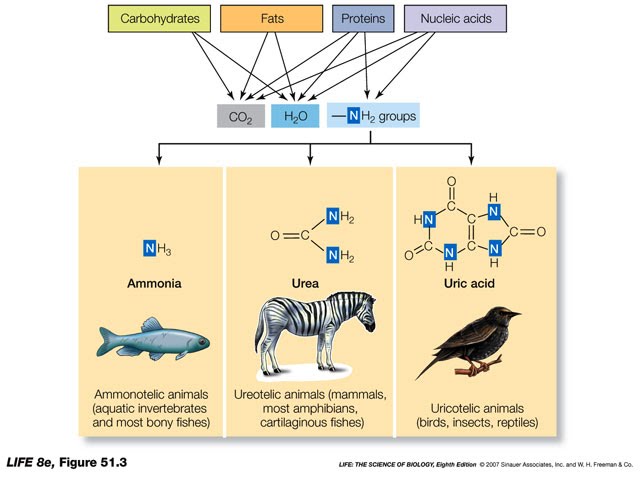 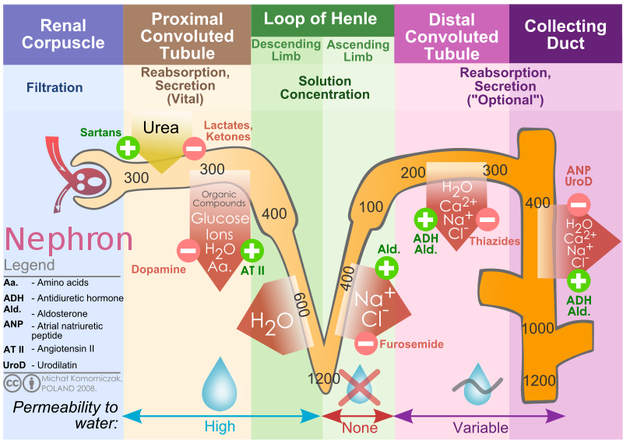 image from Wikimedia Commons
Application
11.3 A 1 ​Consequences of dehydration and overhydration. 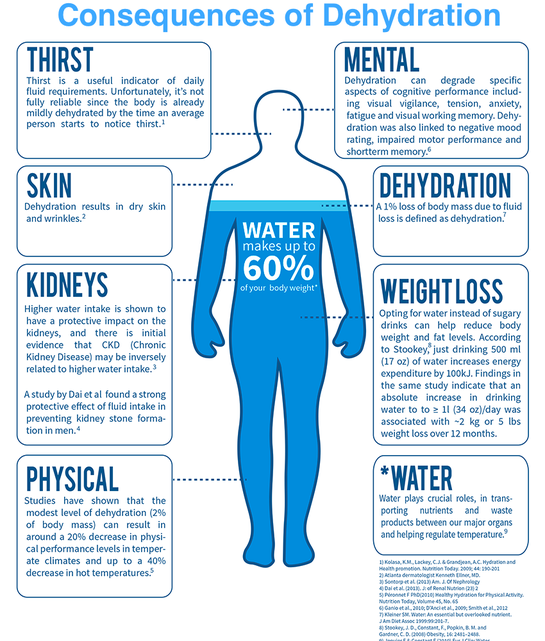 11.3 A 2 Treatment of kidney failure by hemodialysis or kidney transplant.
Hemodialysis
Kidney Transplant

11.3 A 3 ​Blood cells, glucose, proteins and drugs are detected in urinary tests.
Urine tests are used to detect abnormalities and possible diseases 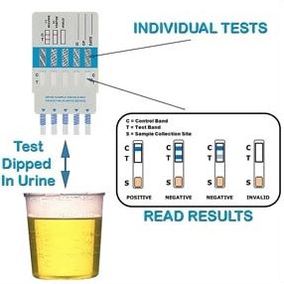 Skills
11.3 S 1 ​Drawing and labelling a diagram of the human kidney.
The kidney functions as the blood’s filtration and water balancing system – it removes metabolic wastes for excretion 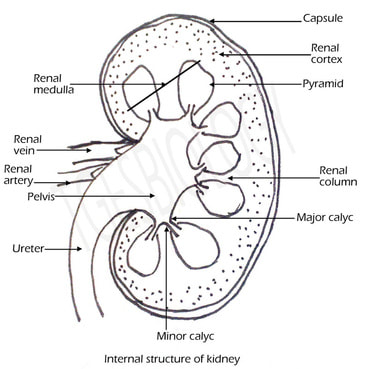 11.3 S 2 ​Annotation of diagrams of the nephron.
The nephron is the functional unit of the kidney, with each nephron being comprised of the following components: 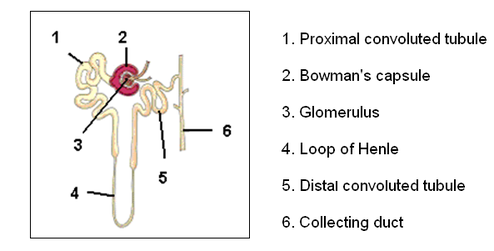 Topic 11.3 Review
​​​​​PowerPoint and Notes on Topic 11.3 by Chris Payne
​​​​Correct use of terminology is a key skill in Biology. It is essential to use key terms correctly when communicating your understanding, particularly in assessments. Use the quizlet flashcards or other tools such as learn, scatter, space race, speller and test to help you master the vocabulary.
Useful Links

​In The News
Building better tiny kidneys to test drugs and help people avoid dialysis - ScienceDaily, Feb 2018
​Kidney stones on the rise - ScienceDaily, Feb 2018
Timing is everything to build kidneys from scratch - Eureka Alert, Jun 2018
Implantable Artificial Kidney Moves Closer to Reality - Healthline, Nov 2017
Video Clips
Even though you probably don't choose to spend a lot of time thinking about it, your pee is kind of a big deal. Today we're talking about the anatomy of your urinary system, and how your kidneys filter metabolic waste and balance salt and water concentrations in the blood. We'll cover how nephrons use glomerular filtration, tubular reabsorption, and tubular secretion to reabsorb water and nutrients back into the blood, and make urine with the leftovers.
​As we promised last week, we're not quite done talking about your pee yet. Today Hank explains how the urinary system regulates the production of urine, by maintaining a study glomerular flow rate. He'll also cover the anatomy of storing and excreting urine -- from the ureters to the urethra -- and the nervous system’s role in controlling the act of urination
After drinking a few glasses of water on a hot day, you might be struck with a sudden ... urge. Behind that feeling are two bean-shaped organs that work as fine-tuned internal sensors. Emma Bryce details how the incredible kidneys balance the amount of fluid in your body, detect waste in your blood, and know when to release the vitamins, minerals, and hormones you need to stay alive
Paul Andersen explains how organisms regulate their internal osmolarity or not.  He starts with a brief description of osmosis and why it is important for animal cell to be surrounded by an isotonic solution.  He then explains how freshwater and saltwater fish osmoregulate.  He finally discussed the nephron within the kidney as an osmoregulatory organ.  He explains how the loop of Henle sets up a gradient which is used to reclaim or remove water with the use of the antidiuretic hormone (or ADH).
This video is the first in a series about the Anatomy of the Kidney. This tutorial explores the gross anatomy of a cut section of the kidney, and provides the prerequisite knowledge for the following tutorials
This is the second tutorial in the Renal Anatomy series. This video explores the anatomy of the Nephron, and its component elements.
Function of the Nephron
Describes the structure of a nephron, including the Bowman’s capsule and glomerulus, convoluted tubules, loop of Henle and collecting duct.
Water is essentially everywhere in our world, and the average human is composed of between 55 and 60% water. So what role does water play in our bodies, and how much do we actually need to drink to stay healthy? Mia Nacamulli details the health benefits of hydration
Is 'water intoxication' a real thing?
The biggest kidney stone on record weighed more than a kilogram and was 17 centimeters in diameter. The patient didn’t actually swallow a stone the size of a coconut; kidney stones form inside the body. So how do they grow in the first place? And why are they so painful to get out? Arash Shadman shares the science behind kidney stones
If you've ever worked for awhile in the beating sun, you might know what it feels like to be dehydrated. What's going on inside your body?
We all know that we need things like water and oxygen to live, but what happens when you get too much of a good thing?
Dr. Mike Evans is founder of the Health Design Lab at the Li Ka Shing Knowledge Institute, an Associate Professor of Family Medicine and Public Health at the University of Toronto, and a staff physician at St. Michael's Hospital
I'm hoping to educate people about the donation process from the donor's perspective. I had so many questions about what my life would look like post donation and it was very difficult to find answers. By sharing my story and my family's story, I hope more people consider becoming a donor because they know have these answers and realize being a donor doesn't have to slow them down.
Reference sites