​Distinguish between anaerobic and aerobic respiration
Distinguish: Make clear the differences between two or more concepts or items.
There are two types of cellular respiration: aerobic and anaerobic. One occurs in the presence of oxygen (aerobic), and one occurs in the absence of oxygen (anaerobic). Both begin with glycolysis - the splitting of glucose.

Some organisms are able to continually convert energy without the presence of oxygen. They undergo glycolysis, followed by the anaerobic process of fermentation to make ATP. Muscle cells can continue to produce ATP when oxygen runs low using lactic acid fermentation. However, this often results in muscle fatigue and pain. Many yeast use alcoholic fermentation to produce ethanol. For this reason, humans have domesticated yeast to use for many commercial purposes including baking as well as beer and wine production.

The amount of energy produced by aerobic respiration may explain why aerobic organisms came to dominate life on Earth. It may also explain how organisms were able to become multicellular and increase in size. 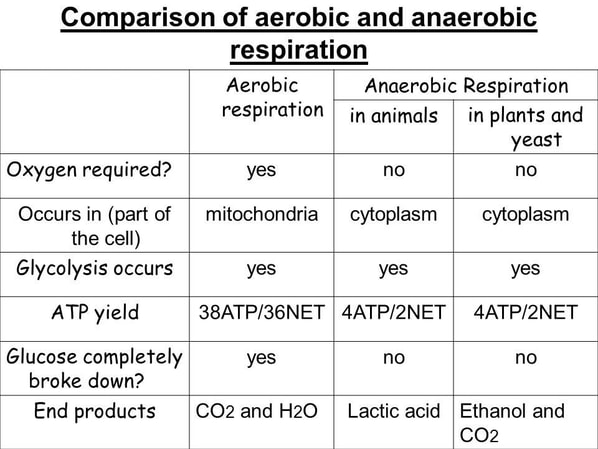 Draw the chemical equation of aerobic and anaerobic respiration
Draw: Represent by means of a labelled, accurate diagram or graph, using a pencil. A ruler (straight edge) should be used for straight lines. Diagrams should be drawn to scale. Graphs should have points correctly plotted (if appropriate) and joined in a straight line or smooth curve.

Distinguish between fermentation and cellular respiration.
Distinguish: ​Make clear the differences between two or more concepts or items.

image from faculty.clintoncc.suny.edu
​
Explain how cellular respiration produces ATP from glucose and other molecules with high potential energy.
Explain: ​Give a detailed account including reasons or causes. 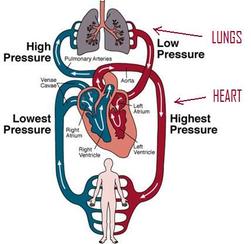 image from www.createwebquest.com
The release of energy when glucose is oxidized is used to help synthesizeATP from ADP and Pirather than release all the energy in the form of heat.The potential energy stored in glucoses bonds is converted to kineticenergy in the form of heat and light and this heat and light is harnessed forATP synthesis
Describe the structure of the heart and how it functions
Describe:  Give a detailed account 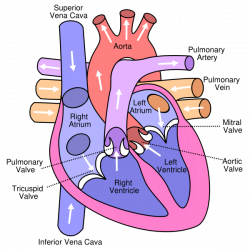 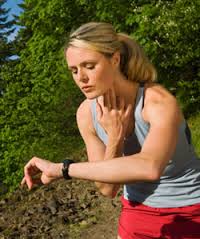 There are many factors that affect your heart rate. The heart rate can speed up or slow down because of stress, exercise, medication, trauma or illness. Even breathing can cause slight fluctuations in heart rate. Most of the time a person does not really think about changes in his heart rate.

Other factors that can affect heart rate
Compare and contrast the structure of arteries, veins and capillaries
Compare and contrast:  Give an account of the similarities and differences between two (or more) items or situations, referring to both (all) of them throughout.
Outline the function of plasma
Outline: ​Give a brief account or summary.

Plasma is a pale-yellowish, watery solution that suspends all of the other parts of the blood. It makes up about 55% of the total volume of our blood. Plasma itself is made up of 91.5% water. It acts as a solvent for important proteins, nutrients, electrolytes, gases, and other substances essential to life.

Plasma is made mostly of water. This allows our blood to flow freely through our blood vessels, transporting a variety of substances throughout our entire body. We can think of plasma as the river upon which particles can travel and be delivered where needed. Red blood cells, white blood cells, and platelets are carried in the current of the plasma, transporting oxygen, providing an immune response, and delivering clotting agents when we have a cut.
Explain how adaptations of red blood cells, including shape, structure and the presence of haemoglobin, make them suitable for the transport of oxygen
Explain:  Give a detailed account of causes, reasons or mechanisms 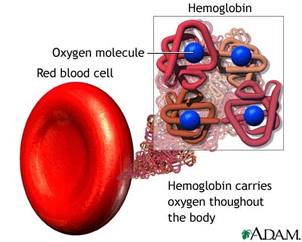 The oxygen carried in your red blood cells is stored in a special protein known as hemoglobin.  A single hemoglobin molecule is made of four identical sub-units. Each sub-unit has a heme component, aglobin chain and an iron atom bound to the heme section. Red blood cells are completely lacking in most other common cellular parts, such as a nucleus with DNA, or mitochondria.

Oxygen is able to bind to each of the iron atoms, meaning that a single hemoglobin molecule is able to carry up to four oxygen molecules at its maximum capacity. Interestingly, the structure of hemoglobin makes it such that the more oxygen that is bound to one of the sub-units, the more other oxygen molecules are attracted to the remaining iron atoms.
Key Terms:
Classroom Materials:
Surface Area to Volume ratio​ worksheet
Size Matters worksheet
​
Osmosis and Diffusion review

Video Clips:
This video shows how Paramecium eat. Paramecium is a genus of unicellular ciliate protozoa, commonly studied as a representative of the ciliate group. Its shape resembles that of a grain of rice. The cell ranges from about 50 to 350 �m in length (more or less one tenth of a millimetre) and is covered with simple cilia, allowing the cell to move at speeds of approximately 12 body lengths per second. The cilia act like oars and move in one direction.There is a deep oral groove containing inconspicuous tongue-like compound oral cilia (as found in other peniculids) used to draw food inside. In general, they feed on bacteria and other small cells, making them heterotrophs. Osmoregulation is carried out by a pair of contractile vacuoles, which actively expel water from the cell absorbed by osmosis from its surroundings.[1] They are relatively large protists and can easily be seen with a medium-power microscope.

Paramecia are widespread in freshwater environments, and are especially common in scums. Recently, some new species of Paramecium have been discovered in the oceans.

Certain single-cell eukaryotes such as Paramecium are examples for exceptions to the universality of the genetic code: in their translation systems a few codons differ from the standard ones.
For most of history, scientists weren't quite sure why our hearts were beating or even what purpose they served. Eventually, we realized that these thumping organs serve the vital task of pumping clean blood throughout the body. But how? Edmond Hui investigates how it all works by taking a closer look at the heart's highly efficient ventricle system
Hank takes us on a trip around the body - we follow the circulatory and respiratory systems as they deliver oxygen and remove carbon dioxide from cells, and help make it possible for our bodies to function.
3D How the Heart Works
Hank tells us about the team of deadly ninja assassins that is tasked with protecting our bodies from all the bad guys that want to kill us - also known as our immune system.
This amazing video shows aWhite Blood Cell Chases Bacteria. Video by David Rogers, Vanderbilt University
The first ever vaccine was created when Edward Jenner, an English physician and scientist, successfully injected small amounts of a cowpox virus into a young boy to protect him from the related (and deadly) smallpox virus. But how does this seemingly counterintuitive process work? Kelwalin Dhanasarnsombut details the science behind vaccines
Seth Berkley explains how smart advances in vaccine design, production and distribution are bringing us closer than ever to eliminating a host of global threats -- from AIDS to malaria to flu pandemics
Vaccine-autism claims, "Frankenfood" bans, the herbal cure craze: All point to the public's growing fear (and, often, outright denial) of science and reason, says Michael Specter. He warns the trend spells disaster for human progress.
Tal Golesworthy is a boiler engineer -- he knows piping and plumbing. When he needed surgery to repair a life-threatening problem with his aorta, he mixed his engineering skills with his doctors' medical knowledge to design a better repair job.
This amazing device could 'eat' bad cholesterol in your arteries.