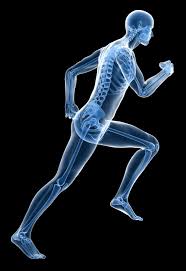 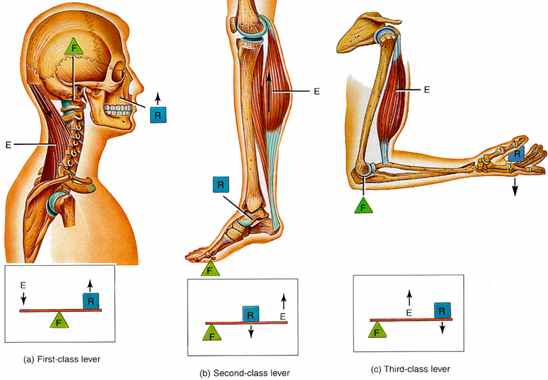 11.2 U 2 ​Synovial joints allow certain movements but not others. (Oxford Biology Course Companion page 477).​
The type of joint determines the amount of movement that is possible. For ball and socket joints, such as the hip or the shoulder, movement through all three planes are possible. At the hip joint, the head of the femur is the ball the fits into the socket of the pelvis. The movements possible at the joint are flexion, extension, rotation, abduction and adduction.. For hinge joints, such as the knee, flexions (bending) and extensions (straightening) are the possible movements (movement in one plane); however, slight side to side movements are possible. 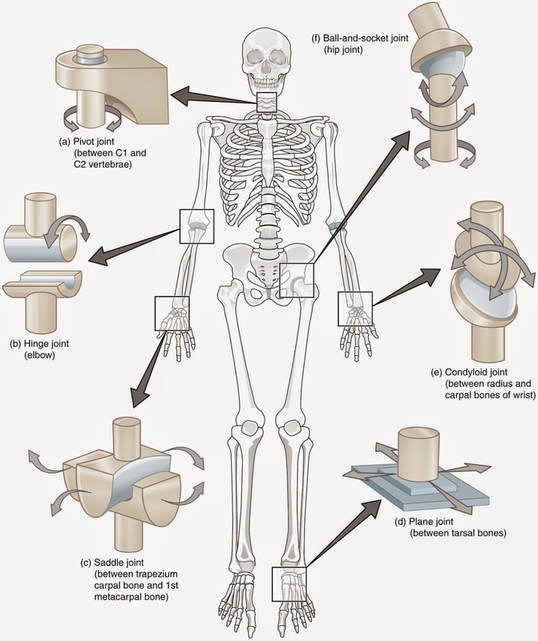 image from wikipedia
11.2 U 3 ​Movement of the body requires muscles to work in antagonistic pairs.  (Oxford Biology Course Companion page 479).​
Skeletal muscles occurs in pairs that are antagonistic. This means that when one contracts, the other relaxes. Antagonistic muscles produce opposite movements at a joint. For example, in the elbow, the triceps extends the forearm while the biceps flex the forearm. 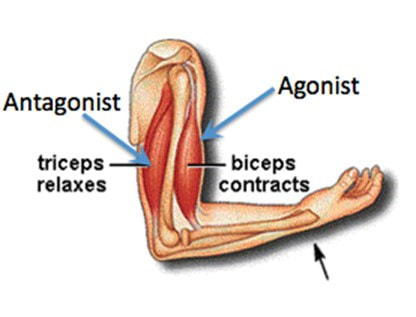 11.2 U 4 ​Skeletal muscle fibres are multinucleate and contain specialized endoplasmic reticulum. (Oxford Biology Course Companion page 480).​
A whole skeletal muscle is considered an organ of the muscular system. Each organ or muscle consists of skeletal muscle tissue, connective tissue, nerve tissue, and blood or vascular tissue. Skeletal muscles vary considerably in size, shape, and arrangement of fibers. They range from extremely tiny strands such as the stapedium muscle of the middle ear to large masses such as the muscles of the thigh. Some skeletal muscles are broad in shape and some narrow. In some muscles the fibers are parallel to the long axis of the muscle; in some they converge to a narrow attachment; and in some they are oblique.
​
The 3 types of muscle tissue are cardiac, smooth, and skeletal. Cardiac muscle cells are located in the walls of the heart, appear striated, and are under involuntary control. Smooth muscle fibers are located in walls of hollow visceral organs, except the heart, appear spindle-shaped, and are also under involuntary control. Skeletal muscle fibers occur in muscles which are attached to the skeleton. They are striated in appearance and are under voluntary control. 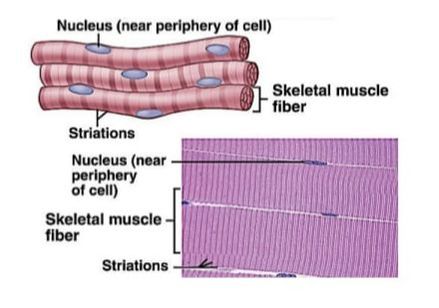 11.2 U 5 ​Muscle fibres contain many myofibrils. (Oxford Biology Course Companion page 480).​
A skeletal muscle is made up of many multinucleate muscle fibers (cells), each of which runs the entire length of the muscle and is connected to at least one motor neuron. Each muscle fiber contains multiple bundles of contractile protein called myofibrils. Myofibrils made up units called sacromere, strung out in single file along the length of myofibrils.

Within each muscle fibre there are many parallel, elongated structures called myofibrils. These have alternating light and dark bands, which give striated muscle its strips. In the centre of each light band is a disc-shaped structure, referred to as the Z-line.​ 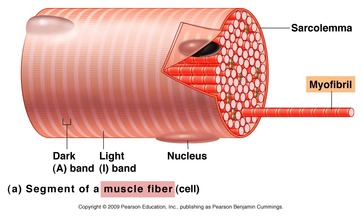 11.2 U 6 ​Each myofibril is made up of contractile sarcomeres. (Oxford Biology Course Companion page 481).​
Myofibrils – rod-shaped parallel bodies consisting of actin and myosin filaments
​
Sarcomere 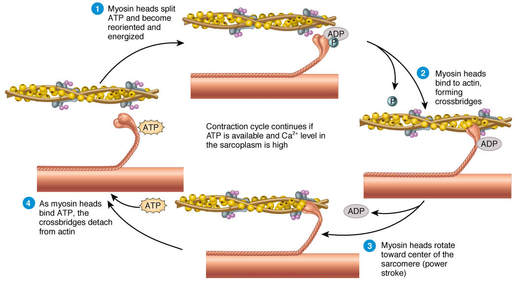 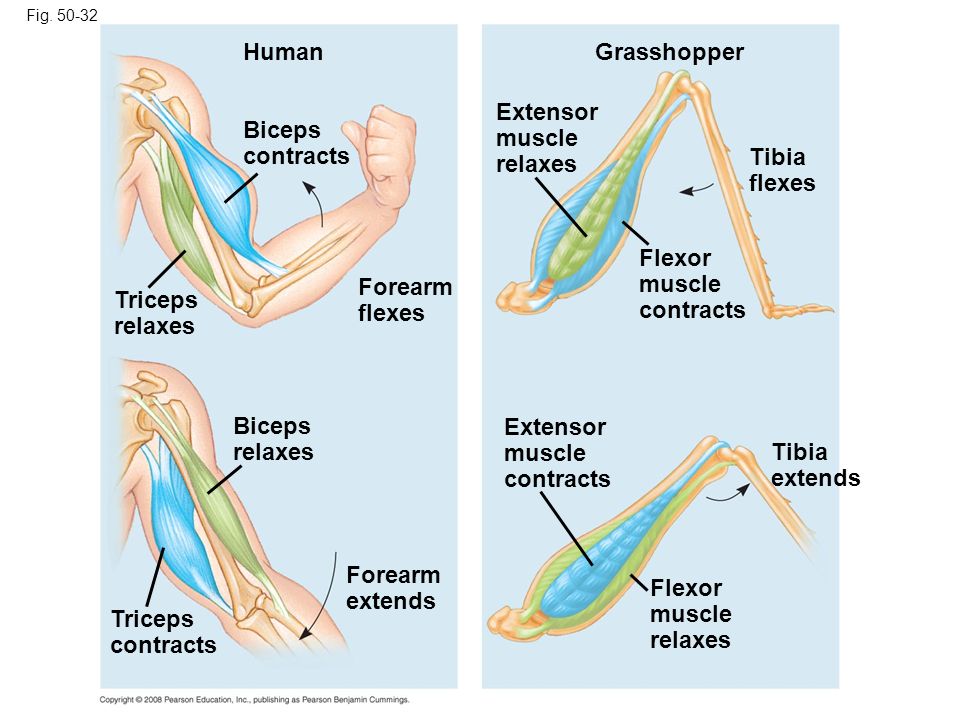 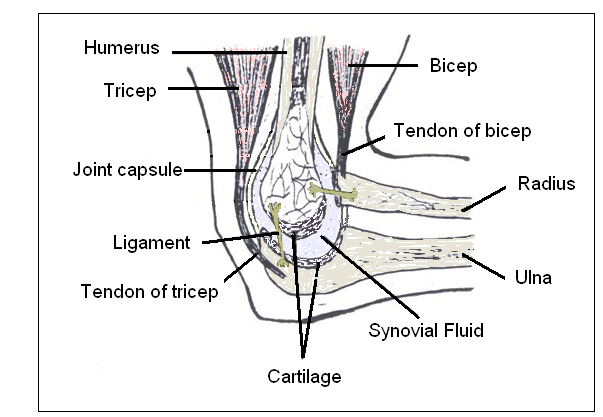 11.2 S 3 Analysis of electron micrographs to find the state of contraction of muscle fibres. Measurement of the length of sarcomeres will require calibration of the eyepiece scale of the microscope. (Oxford Biology Course Companion page 482)
​Notice in the fully contracted sarcomere the actin filaments slide along the myosin causing the light bands to shorten, even though the dark bands stay the same length. The Z lines get closer together as the sarcomere contracts.. The muscle also can be in various states of partial contraction.

Topic 11.2 Review
​​​​PowerPoint and Notes on Topic 11.2 by Chris Payne
​​​​Correct use of terminology is a key skill in Biology. It is essential to use key terms correctly when communicating your understanding, particularly in assessments. Use the quizlet flashcards or other tools such as learn, scatter, space race, speller and test to help you master the vocabulary.
Useful Links

​In The News
How Muscles Work - Science Daily, Aug 2017
Scientists find power switch for muscles - Science Daily, Mar 2018
Video Clips
​Movement of the body's skeleton is made possible by a number of body parts working together including the joints.  A hinge joint at the elbow allows the arm to bend and extend.  The condylar joint at the knee gives similar movement plus some rotation.  Mobile ellipsoid joints between the fingers and palm of the hand allow circular movements but no rotation.  Ball-and-socket joints, like the one at the shoulder, give maximum freedom of movement.  At the other extreme, plane joints between the toe bones permit only a small degree of gliding movement and the pivot joint between the two cervical vertebrae-the atlas and the axis-merely provides rotation of the head.  The saddle joint at the ankle is almost as mobile as the shoulder joint, but rotation is far more limited.
​Each time you take a step, 200 muscles work in unison to lift your foot, propel it forward, and set it down. It’s just one of the many thousands of tasks performed by the muscular system: this network of over 650 muscles covers the body and is the reason we can blink, smile, run, jump, and stand upright. So how does it work?
​We continue our look at your bones and skeletal system, skipping over the silly kid's song in favor of a more detailed look at your your axial and appendicular skeleton. This episode also talks about the structural and functional classifications of your joints and the major types of body movement that they facilitate.
​We're kicking off our exploration of muscles with a look at the complex and important relationship between actin and myosin. Your smooth, cardiac, and skeletal muscles create movement by contracting and releasing in a process called the sliding filament model. Your skeletal muscles are constructed like a rope made of bundles of protein fibers, and that the smallest strands are your actin and myosin myofilaments. Its their use of calcium and ATP that causes the binding and unbinding that makes sarcomeres contract and relax.
​Hank calls in a friend to do his push ups for him today to explain how skeletal muscles work together to create and reverse movements. Hank and Claire also demonstrate the role size plays in motor units, the three phase cycle of muscle twitches, and how the strength and frequency of an impulse affects the strength and duration of a contraction. This episode also explains twitch summation, tetanus, and isotonic vs. isometric movements.
​Impulse to activate action potential in skeletal muscle,
​Muscle contraction animation
Reference sites