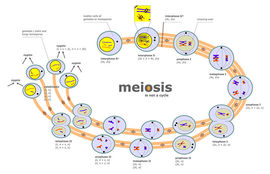 Meiosis is a type of cell division that reduces the number of chromosomes in the parent cell by half and produces four gamete cells. This process is required to produce egg and sperm cells for sexual reproduction.

This unit will take 2 school days
​Essential idea:
​Nature of science:
Understanding:
3.3.U1 One diploid nucleus divides by meiosis to produce four haploid nuclei. (Oxford Biology Course Companion page 160).​
Meiosis is the process by which sex cells (gametes) are made in the reproductive organs. It involves the reduction division of a diploid germline cell into four genetically distinct haploid nuclei

The process of meiosis consists of two cellular divisions: 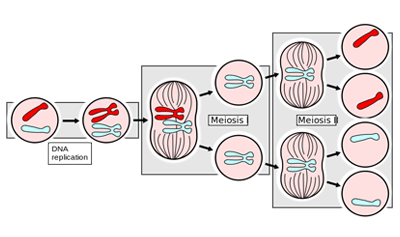 3.3.U2 The halving of the chromosome number allows a sexual life cycle with fusion of gametes. (Oxford Biology Course Companion page 161).​
Meiosis is preceded by interphase, during which DNA is replicated (in the S phase) to produce two genetically identical copies. The two identical DNA molecules are identified as sister chromatids, and are held together by a single centromere. The sister chromatids are separated during meiosis II, following the separation of homologous chromosomes in meiosis I

3.3.U3 DNA is replicated before meiosis so that all chromosomes consist of two sister chromatids. (Oxford Biology Course Companion page 162).​
DNA is replicated in interphase, which is not a part of meiosis, but must precede it 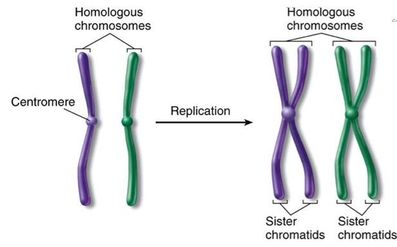 3.3.U4 The early stages of meiosis involve pairing of homologous chromosomes and crossing over followed by condensation.
Meiosis I: prophase I
At the start of prophase I, the chromosomes have already duplicated. During prophase I, they coil and become shorter and thicker and visible under the light microscope.

​The duplicated homologous chromosomes pair, and crossing-over (the physical exchange of chromosome parts) occurs. Crossing-over is the process that can give rise to genetic recombination. At this point, each homologous chromosome pair is visible as a bivalent (tetrad), a tight grouping of two chromosomes, each consisting of two sister chromatids. The sites of crossing-over are seen as crisscrossed nonsister chromatids and are called chiasmata (singular: chiasma)
Meiosis I: metaphase IMeiosis I: anaphase I

Meiosis I: telophase I 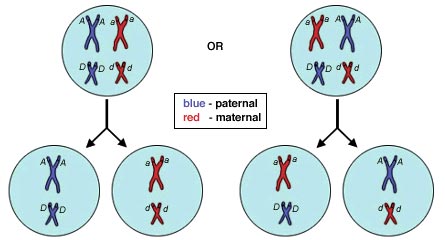 The three main sources of genetic variation arising from sexual reproduction are:
​
Crossing over involves the exchange of segments of DNA between homologous chromosomes during prophase I
Because it mixes differents sets of DNA basically. 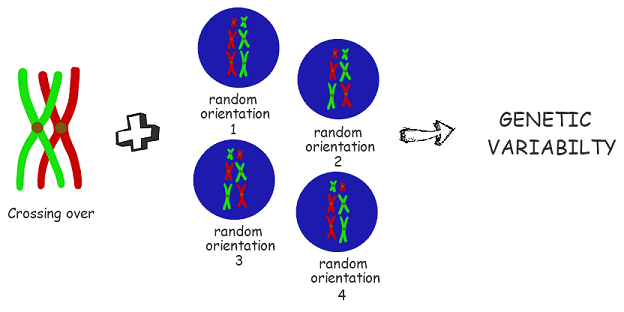 image from IB Biology Help
3.3.U8 Fusion of gametes from different parents promotes genetic variation. Oxford Biology Course Companion​Outline the role of fertilization as a source of genetic variation.
Both the father and the mother have sex cells produced through meiosis and so have a variety of unique gametes with unique genomes. And when the gametes fuse the egg and the sperm that will be fertilized is random. Out of the many eggs that woman have and the millions sperm males produce the two that will fertilize is completely random. And this also leads to genetic variation 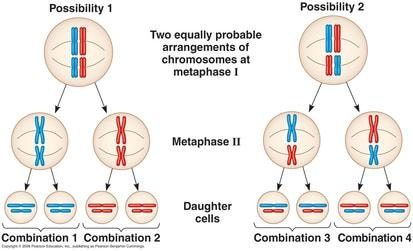 Application
3.3.A1 Non-disjunction can cause Down syndrome and other chromosome abnormalities.
Meiosis is the process of creating haploid gametes from a diploid cell. If everything goes smoothing during meiosis, chromosomes will be separated and distributed evenly to produce four haploid gametes. However, sometimes chromosomes do not separate properly. This is called nondisjunction and results in gametes with either too many or too few chromosomes. In humans, nondisjunction becomes more common the older one gets.

​If one of these abnormal gametes undergoes fertilization, then a baby with an abnormal number of chromosomes in its cells could be born. Trisomy is the condition of having 3 copies of one chromosome type. It is designated as 2n + 1 because the cell has the normal two sets of each 23 types of chromosomes plus an extra copy of one chromosome. Monosomy is the condition of having only 1 copy of a chromosome and is designated as 2n - 1.
Down Syndrome Tutorial 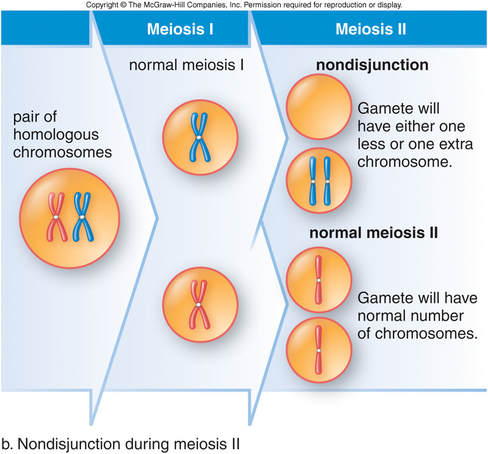 Other studies also suggest that: 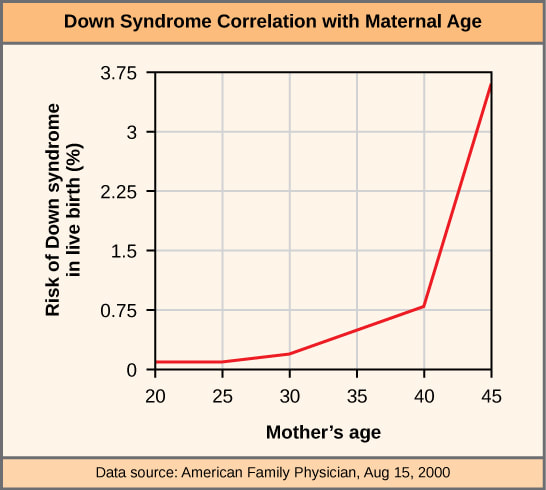 3.3.A3 Description of methods used to obtain cells for karyotype analysis e.g. chorionic villus sampling and amniocentesis and the associated risks. (Oxford Biology Course Companion page 163).
Amniocentesis or chorionic villi sampling allows prenatal karyotyping, by isolation of amniotic fluid or chorion, containing fetal cells in mitosis, which are stained and paired
diagnosis of chromosomal abnormalities, such as Down syndrome, identifying extra chromosome 21 (trisomy 21

image from IB Biology Help
Skills
3.3.S1 Drawing diagrams to show the stages of meiosis resulting in the formation of four haploid cells. (Oxford Biology Course Companion page 164).​
Meiosis consists of two divisions, both of which follow the same stages as mitosis (prophase, metaphase, anaphase, telophase). Meiosis is preceded by interphase, in which DNA is replicated to produce chromosomes consisting of two sister chromatids. A second growth phase called interkinesis may occur between meiosis I and II, however no DNA replication occurs in this stage.

The second division separates sister chromatids (these chromatids may not be identical due to crossing over in prophase I)
Key Terms:
Class Materials:

​Topic 3.3 Review
Powerpoint and Notes on Topic 3.3 by Chris Payne
​​​​​​​​​​Correct use of terminology is a key skill in Biology. It is essential to use key terms correctly when communicating your understanding, particularly in assessments. Use the quizlet flashcards or other tools such as learn, scatter, space race, speller and test to help you master the vocabulary.
Useful Links:
Learn.Genetics at Utah is an excellent resource for this topic, and all animations are easy enough to save.

Trisomy from Learn.Genetics (their page on Down Syndrome is here)
Excellent animation of meiosis I and meiosis II from BioStudio

Animation and have-a-go from Learn.Genetics

Avoiding invasive tests for Down syndrome:

This news article outlines a new blood test for Down syndrome which does not require the invasive techniques of chorionic villus sampling or amniocentesis. See if you can work through the statistics posted there:


National Geographic Shutting Down the Extra Chromosome in Downs Syndrome
​
TOK
​Video Clips:
​Paul Andersen explains how the process of meiosis produces variable gametes.  He starts with a brief discussion of haploid and diploid cells.  He compares and contrasts spermatogenesis and oogenesis.  He explains how each person is different due to independent assortment, crossing over and random fertilization.
In this video Paul Andersen explains the difference between diploid and haploid cells.  He starts with a brief description of the central dogma and how genes code for proteins.  He then uses the phenotype of red hair to explain that humans are diploid creatures.  He discriminates between diploid somatic cells and haploid sex cells.  He finishes with a brief description of different life cycles dominated by haploid and diploid individuals.
​Hank gets down to the nitty gritty about meiosis, the special type of cell division that is necessary for sexual reproduction in eukaryotic organisms.
A brief stop-motion walkthrough of nondisjunction during Meiosis II.
Reference sites