image from Lumen Learning
In the Transcription and Gene Expression unit we will extend our knowledge on Topic 2.7 DNA Replication, Transcription and Translation. We will also look at how the environment can influence gene expression. 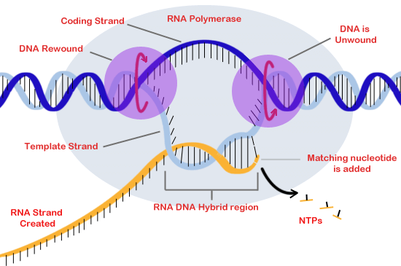 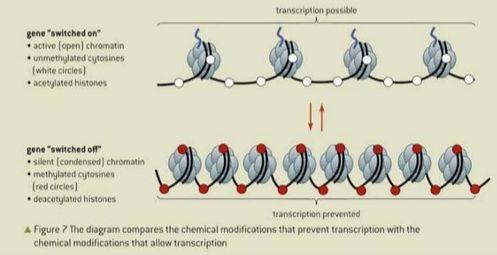 7.2 U 3 Eukaryotic cells modify mRNA after transcription. (Oxford Biology Course Companion page 357).​
In eukaryotes, the locations for transcription and translation are separated by the nuclear membrane. This allows for post-transcriptional modification of the mRNA. The first product of transcription is pre-mRNA 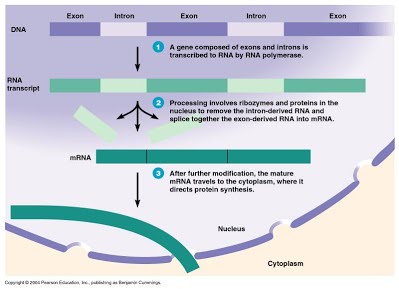 7.2.U 4 Splicing of mRNA increases the number of different proteins an organism can produce.   (Oxford Biology Course Companion page 358).
Alternative splicing can occur with genes that produce multiple proteins, which means that some exons may also be removed during splicing, thus producing different polypeptides

7.2.U5 Gene expression is regulated by proteins that bind to specific base sequences in a DNA (Oxford Biology Course Companion page 351).
Gene expression can also be regulated by the environment surrounding the gene that is expressed or repressed. Specific proteins can regulate how much transcription of a particular gene will occur. These include proteins called enhancers, silencers and promoter-proximal elements 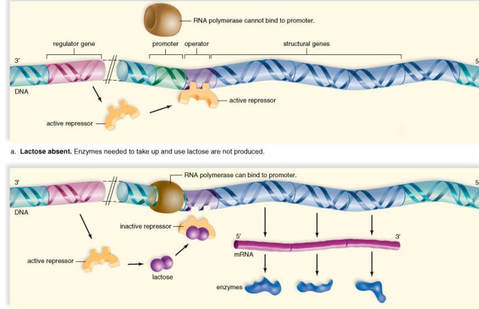 During embryonic development embryos contain chemicals called morphogens, which can affect gene expression and thereby affecting the fate of embryonic cells depending on their position within the embryo.
Application
7.2 A 1 The promoter as an example of non-coding DNA with a function. (Oxford Biology Course Companion page 355).​
The promoter region is a DNA sequence that initiates transcription and is an example of non-coding DNA that plays a role in gene expression. The promoter sequence is located near the start site of transcription and is where the RNA polymerase binds in order for transcription to take place.​ 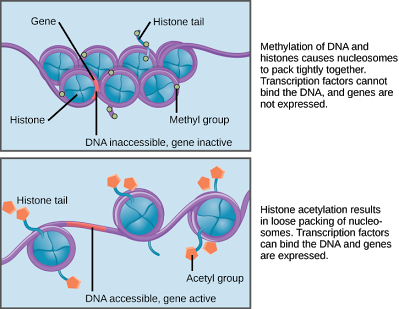 Topic 7.2 Review
​PowerPoint and Notes on Topic 7.2 by Chris Payne
​​​Correct use of terminology is a key skill in Biology. It is essential to use key terms correctly when communicating your understanding, particularly in assessments. Use the quizlet flashcards or other tools such as learn, scatter, space race, speller and test to help you master the vocabulary.

Bits of Mystery DNA, Far From ‘Junk,’ Play Crucial Role - New York Times, S3p 2012
Which sequences make DNA unwrap and breathe? - Science Daily, Dec 2017
Epigenomics starts to make its mark - Nature, April 2014
TOK
Video Clips
Moshe Szyf is a pioneer in the field of epigenetics, the study of how living things reprogram their genome in response to social factors like stress and lack of food. His research suggests that biochemical signals passed from mothers to offspring tell the child what kind of world they're going to live in, changing the expression of genes. "
Explore gene expression with the Amoeba Sisters, including the fascinating Lac Operon found in bacteria! Learn how genes can be turned "on" and "off" and why this is essential for cellular function.
​We learned about gene expression in biochemistry, which is comprised of transcription and translation, and referred to as the "central dogma" of molecular biology. But how is this process regulated? How does a cell know which genes to express and when? Well it's pretty complicated, but let's just get our feet wet by looking at operons, epigenetics, and transcription factors!
​This video “Your DNA, the Environment, and Epigenetics” introduces the concept of epigenetics by demonstrating the outcome of an environmentally induced epigenetic change through animation.
Reference sites