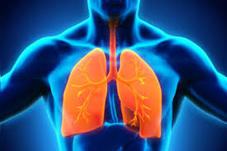 image from Healthdirect
In the Transport of respiratory Gas unit is an extension of Topic 6.4 Gas Exchange. In this unit you will learn about the structure and function of the lung and how oxygen is absorbed into the blood. We will also learn how exercise and altitude can affect the ventilation process. Last we will learn how different diseases can affect the function of the lung.

This unit will last 5 school days
​Essential idea:
​Nature of science:
Understandings:
D.6 U 1 ​Oxygen dissociation curves show the affinity of hemoglobin for oxygen.
Hemoglobin protein transports oxygen. The hemoglobin protein has 4 polypeptide chains. Each one of those chains has an additional non amino acid part called a heme group. Each heme group has an iron atom. Oxygen attaches to the Iron molecule. One hemoglobin molecule can carry 8 oxygen atoms - an O2 on each iron atom and so oxyhemoglobin is often written as HbO8.

​Oxygen dissociation curves show the affinity of hemoglobin for oxygen. You can watch this animation to see the different levels of saturation of oxygen at different partial pressures of oxygen (term for concentration of a gas in a mixture of gases). 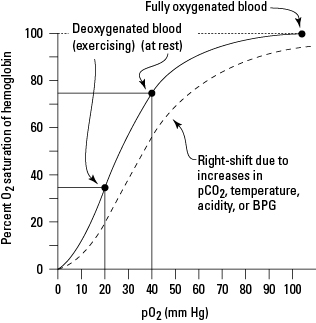 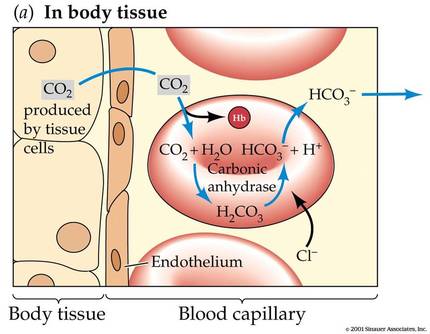 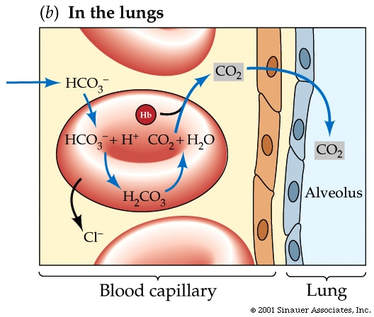 D.6 U 4 ​The Bohr shift explains the increased release of oxygen by hemoglobin in respiring tissues.
​Increased metabolism results in increased concentrations of carbon dioxide in the blood which in turn lowers blood pH. This increased acidity shifts the oxygen dissociation curve to the right and so results in a greater release of oxygen (at the same partial pressure of oxygen). This supports aerobic respiration in the active tissues. The movement of the graph to the right is called the BOHR SHIFT. 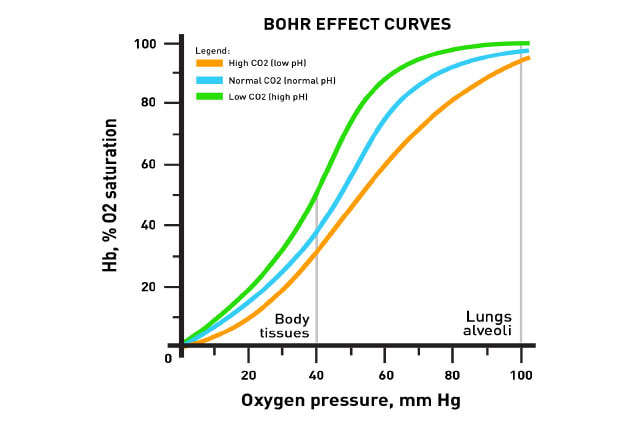 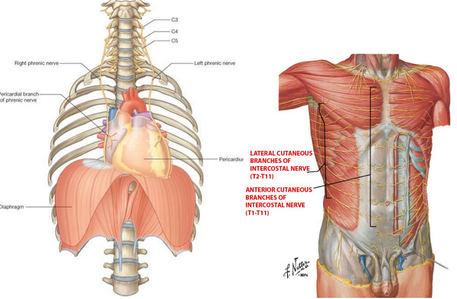 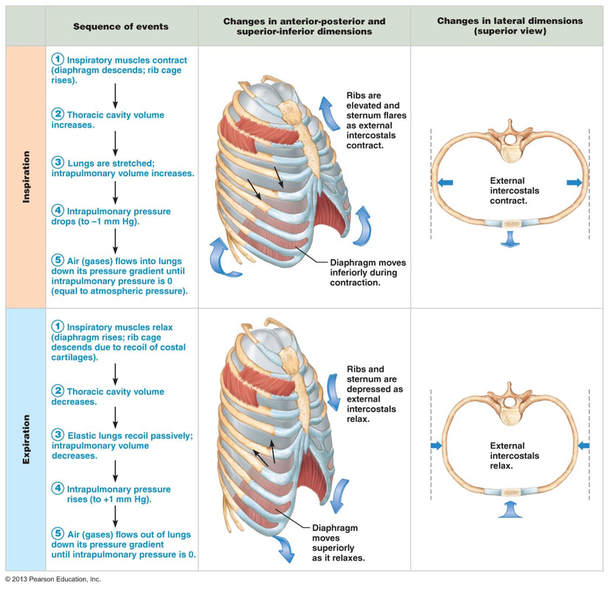 If blood pH falls below 7.35 then the chemoreceptors we mentioned above increase the rate of ventilation and carbon dioxide is removed form the body. This CO2 has been formed at the alveolus from HCO-3 ions being added to H+ ions to form water and CO2. This has the effect of withdrawing the H+ ions from the blood. As pH is a measure of the amount of H+ ions then less of these ions means that the pH rises and the blood gets less acidic.

The kidney also plays a role in maintenance of blood pH. The kidney can secrete H+ ions into the urine in order to raise pH (less acidic). Greater amounts of hydrogen carbonate ions can be absorbed from the filtrate in the kidney which allows more CO2 formation at the lungs as outlined earlier ( ultimately less H+) and the resultant increase in pH. 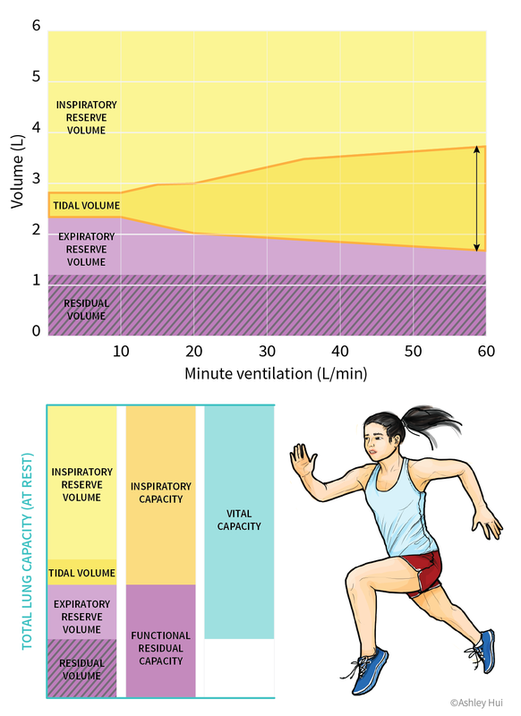 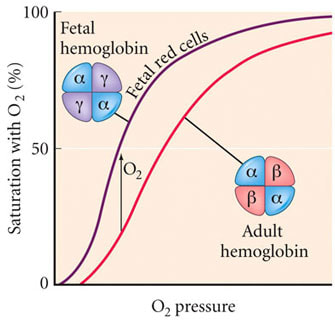 Applications
D.6 A 1 ​Consequences of high altitude for gas exchange.
Gas exchange at high altitude can be a problem as the partial pressure of oxygen is low and Hb may not be fully saturated. Red blood cell numbers increase in response to this problem. Ventilation rate increases. Muscle produce more myoglobin (a protein that can store oxygen in muscle cells and only release it when haemoglobin is depleted). Populations who have lived for long periods of time at high altitudes have oxygen dissociation curves that are shifted to the left to encouraging O2 loading at low partial pressures of oxygen. They also have greater alveolar surface area and larger vital capacities.

The rapid breathing rate can result in the expulsion of too much carbon dioxide form the body leading to an increase in blood pH called alkalaemia (alkaline blood).

If untreated this condition can lead to pulmonary edema and cerebral edema (fluid on lungs and brain respectively). Both conditions are rare (<1% of unacclimatised climbers) and the reasons for edema in these cases are poorly understood. This can lead to unconsciousness and death. The only treatment is to descend the mountain. Upon descending the mountain the problem will be rectified as the kidneys will secrete HCO3- ions in the urine (alkali urine). The bodies response will be to replace to HCO3- ions and in the process H+ ions are formed. This reduces the pH to normal levels again. 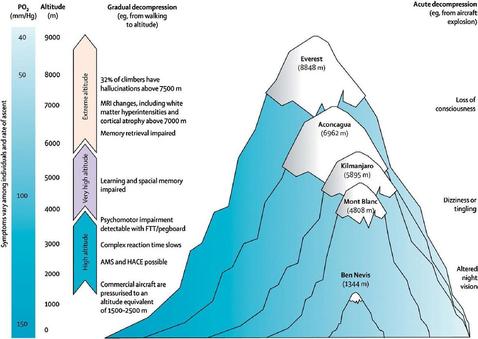 D.6 A 2 ​pH of blood is regulated to stay within the narrow range of 7.35 to 7.45.
​A drop in pH below 7.35 (range is 7.35 to 7.45) triggers impulses from the medulla to intercostal muscles and diaphragm triggering an increase in inhalation rate. Increased ventilation rate withdraws CO2 from the blood as the
reaction below moves to the left.

The removal of H+ raises the pH again - back to within normal range. 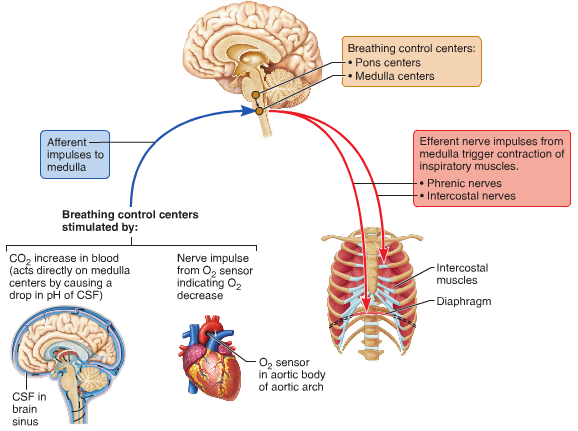 Cause
Consequences
interactive link to incidence of lung cancer in the US
Skills
D.6 S 1 ​Analysis of dissociation curves for hemoglobin and myoglobin.
​Myoglobin is an oxygen binding protein found in almost all mammals. It serves as a store of oxygen in muscles and it only releases it's attached oxygen when hemoglobin has already depleted its supplies. The partial pressure of oxygen in the tissues must be very low before myoglobin will dissociate its oxygen. This allows aerobic respiration to continue at very low partial pressure of oxygen in actively respiring tissues e.g. cardiac muscle. 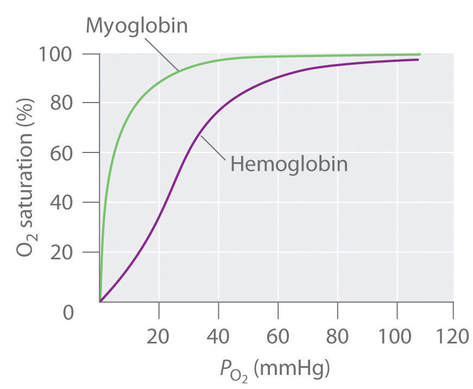 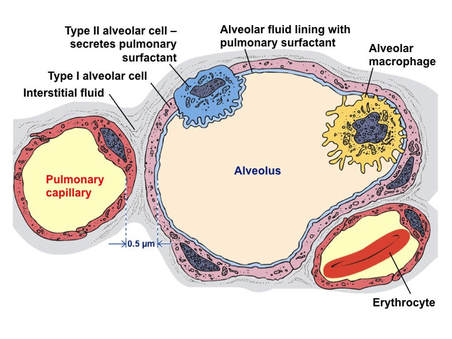 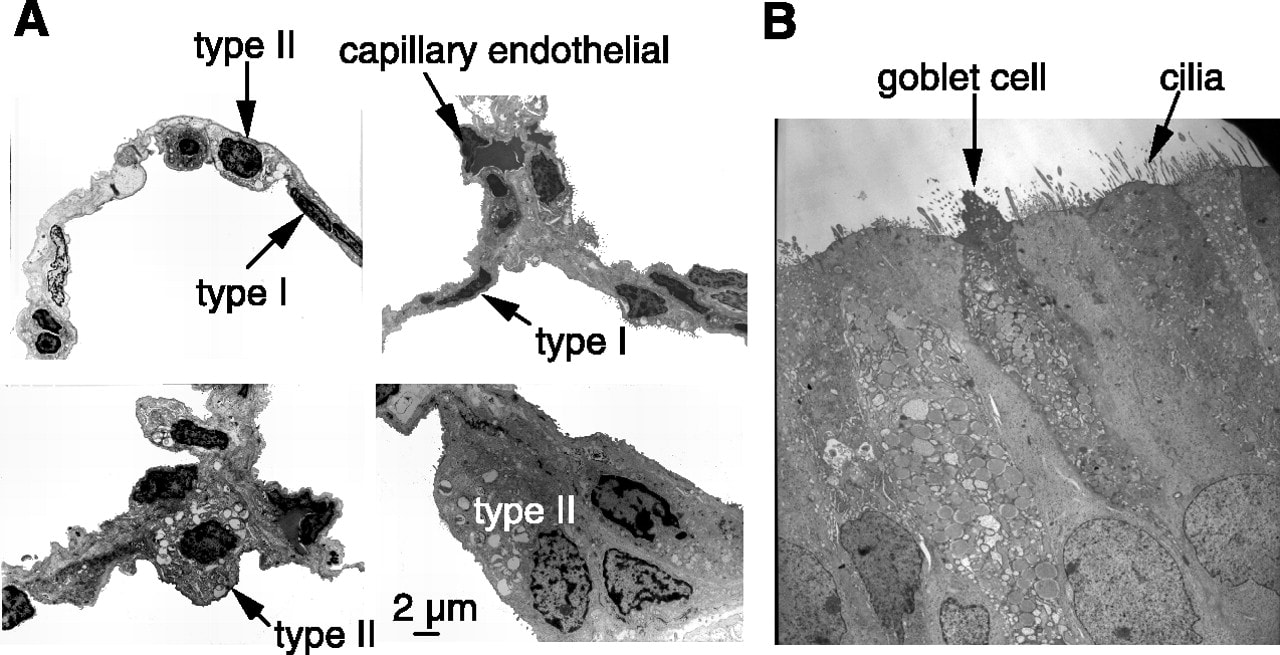 
​Topic D.6 Review
​​​​Correct use of terminology is a key skill in Biology. It is essential to use key terms correctly when communicating your understanding, particularly in assessments. Use the quizlet flashcards or other tools such as learn, scatter, space race, speller and test to help you master the vocabulary.
Useful Links

Two weeks in the mountains can change your blood for months - Science Mag, Oct 2016
Mutations may reveal how Tibetans can live on world’s highest plateau - Science Mag, Apr 2017
Putting the Brakes on Lung Disease - Pursuit, May 2018
Video Clips
Oxygen Hemoglobin Dissociation Curve
​brief introduction to carbon dioxide transport in the blood. Bicarbonate buffer system perspective
Expedition medical officer, Monica Piris, talks about the dangers at altitude and the value of acclimatization from Base Camp at 5,200m (17000ft).
Why would a fish throw up its stomach? What makes a scuba diver develop painful microbubbles in their joints? Neosha S Kashef details the basics of barotrauma, shedding light on how humans and fish alike are influenced by laws of physics under the sea
​What is emphysema? Emphysema's a type of chronic obstructive pulmonary disease (COPD) where the connective tissue in the lungs breaks down, obstructing the airways.
More than 300 million people around the world suffer from asthma, and around 250,000 people die from it each year. But why do people get asthma, and how can this disease be deadly? Christopher E. Gaw describes the main symptoms and treatments of asthma.
Reference sites