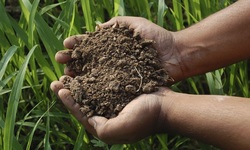 Image from Food Tank
We tend to take the soil around us for granted. It is much more than mud, clay or dirt. All the food that we consume depends ultimately upon soil. Plants grow and depend on the soil. We either eat plants that grow directly in the soil or the animals that eat the plants.
Soils are the part of the lithosphere where life processes and soil forming processes both take place.

In this unit we will look at the soil system, soil water, soil formation and the consequences of soil degradation.

This unit is a minimum of 3 hours
Significant Ideas
Big questions:
Knowledge & Understanding:
5.1.U1 The soil system may be illustrated by a soil profile that has a layered structure (horizons).
[Studies of specific soil profiles, such as podsol, are not required.] 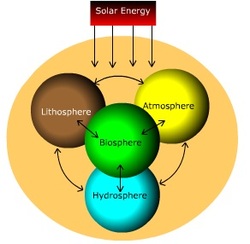 Soils are major components of the world's ecosystems.Soil forms the Earth’s atmosphere, lithosphere (rocks), biosphere (living matter) and hydrosphere (water). Soil is what forms the outermost layer of the Earth’s surface, and comprise weathered bedrock (regolith), organic matter (both dead and alive), air and water.

The soil interacts with the atmosphere, lithosphere, biosphere and hydrosphere.
Soil is a mixture of four basic parts – minerals, organic matter, air and water. It serves four primary functions:

Soils are important to humans in many ways:

The characteristics of soils will dependent on: 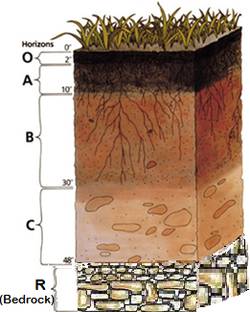 image from www.eoearth.org
Soil has matter in all three states:
5.1.3U Transfers of material within the soil, including biological mixing and leaching (minerals dissolved in water moving through soil), contribute to the organization of the soil 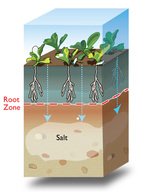 image from www.senninger.com
​Translocation involves the movement of soil-forming materials through the developing soil profile. Translocation occurs by water running through the soil transferring materials from upper to lower portions of the profile. Burrowing animals like earth worms, ants, etc., move soil materials within the profile. Burrowing animals create passage ways through which air and water can travel promoting soil development.
5.1.U4 There are inputs of organic material including leaf litter and inorganic matter from parent material, precipitation and energy. Outputs include uptake by plants and soil erosion. 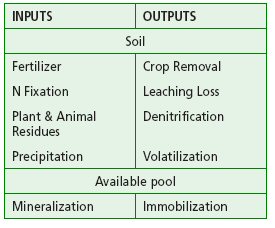 1. Weathering
Rock weathering is one of the most important long-term sources for nutrients. However, this process adds nutrients to ecosystems in relatively small quantities over long periods of time. Important nutrients released by weathering include:
Calcium, magnesium, potassium, sodium, silicon, iron, aluminum, and phosphorus.

2. Atmospheric Input
Large quantities of nutrients are added to ecosystems from the atmosphere. This addition is done either through precipitation or by a number of biological processes.
Carbon - absorbed by way of photosynthesis.
Nitrogen - produced by lightning and precipitation.
Sulfur, chloride, calcium, and sodium - deposited by way of precipitation.

3. Biological Nitrogen Fixation
Biological nitrogen fixation is a biochemical process where nitrogen gas from the atmosphere is chemically combined into more complex solid forms by metabolic reactions in an organism. This ability to fix nitrogen is restricted to a symbiotic associations with legumes and other microorganisms.

1. Erosion
Soil erosion is probably the most import means of nutrient loss to ecosystems. Erosion is very active in agricultural and forestry systems, where cultivation, grazing, and clearcutting leaves the soil bare and unprotected. When unprotected, the surface of the soil is easily transported by wind and moving water. The top most layers of a soil, which have an abundance of nutrient rich organic matter, are the major storehouse for soil nutrients like phosphorus, potassium, and nitrogen.

2. Leaching
Leaching occurs when water flowing vertically through the soil transports nutrients in solution downward in the soil profile. Many of these nutrients can be completely lost from the soil profile if carried into groundwater and then horizontally transported into rivers, lakes, or oceans. Leaching losses are, generally, highest in disturbed ecosystems. In undisturbed ecosystems, efficient nutrient cycling limits the amount of nutrients available for this process.

3. Gaseous Losses
High losses of nutrients can also occur when specific environmental conditions promote the export of nutrients in a gaseous form. When the soil is wet and anaerobic, many compounds are chemically reduced to a gas from solid forms in the soil. This is especially true of soil nitrogen.

5.1.U5 Transformations include decomposition, weathering and nutrient cycling.
​The transformation and movement of materials within soil organic matter pools is a dynamic process influenced by climate, soil type, vegetation and soil organisms. All these factors operate within a hierarchical spatial scale. Soil organisms are responsible for the decay and cycling of both macronutrients and micronutrients, and their activity affects the structure, tilth and productivity of the soil.

image from earthonline.com
5.1.U6 The structure and properties of sand, clay and loam soils differ in many ways, including mineral and nutrient content, drainage, water-holding capacity, air spaces, biota and potential to hold organic matter. Each of these variables is linked to the ability of the soil to promote primary productivity
Soil structure affects aeration, water-holding capacity, drainage, and penetration by roots and seedlings, among other things. Soil structure refers to the arrangement of soil particles into aggregates (or peds) and the distribution of pores in between. It is not a stable property and is greatly influenced by soil management practices.

Primary productivity of soils depend on 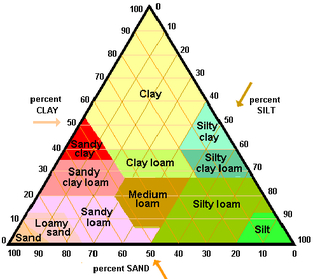 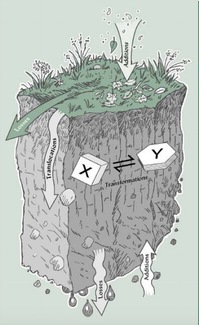 There are four basic processes that occur in the formation of soils,

inputs -  physical movement of material within soil.Outputs - occur both from the surface and from the deep subsoil. Transfers  - translocation of materials within the soil profile is primarily due to gradients in water potential and chemical concentrations within the soil pores.Transformation - change of some soil constituent without any physical displacement.Storages​
The two driving forces for these processes are climate (temperature and precipitation) and organisms, (plants and animals). Parent material is usually a rather passive factor in affecting soil processes because parent materials are inherited from the geologic world. Topography (or relief) is also rather passive in affecting soil processes, mainly by modifying the climatic influences of temperature and precipitation.

5.1.A2 Explain how soil can be viewed as an ecosystem.
Soil is the link between the air, water, rocks, and organisms, and is responsible for many different functions in the natural world that we call ecosystem services. These soil functions include: air quality and composition, temperature regulation, carbon and nutrient cycling, water cycling and quality, natural "waste" (decomposition) treatment and recycling, and habitat for most living things and their food. We could not survive without these soil functions.

​Billions of organisms inhabit the upper layers of the soil, where they break down dead organic matter, releasing the nutrients necessary for plant growth. The micro-organisms include bacteria, actinomycetes, algae and fungi. Macro-organisms include earthworms and arthropods such as insects, mites and millipedes. Each group plays a role in the soil ecosystem and can assist the organic farmer in producing a healthy crop. Micro-organisms can be grouped according to their function: free-living decomposers convert organic matter into nutrients for plants and other micro-organisms, rhizosphere organisms are symbiotically associated with the plant roots and free-living nitrogen fixers. 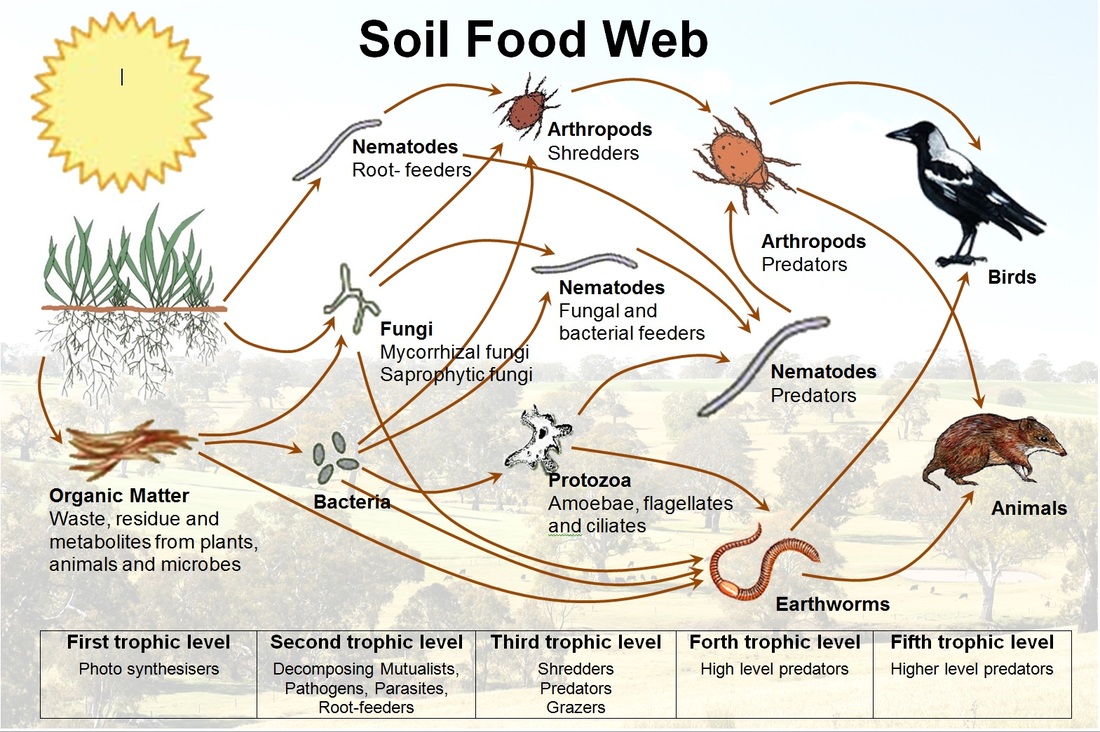 image from asknature
5.1.A3 Compare and contrast the structure and properties of sand, clay and loam soils, with reference to a soil texture diagram, including their effect on primary productivity.
[Familiarity with the soil texture triangle diagram used for soil type classification based on the percentage of sand, silt, and clay in the soil is required.]

Clay:The more clay present in soil the higher the force needed to pull a plough.

*Plastic limit: occurs when each ped is surrounded by a film of water sufficient to act as a lunricant.

*Liquid limit: occurs when there is sufficient water to reduce cohesion between the peds.

*Field capacity: maximum amount of water  that a particular soil can hold. 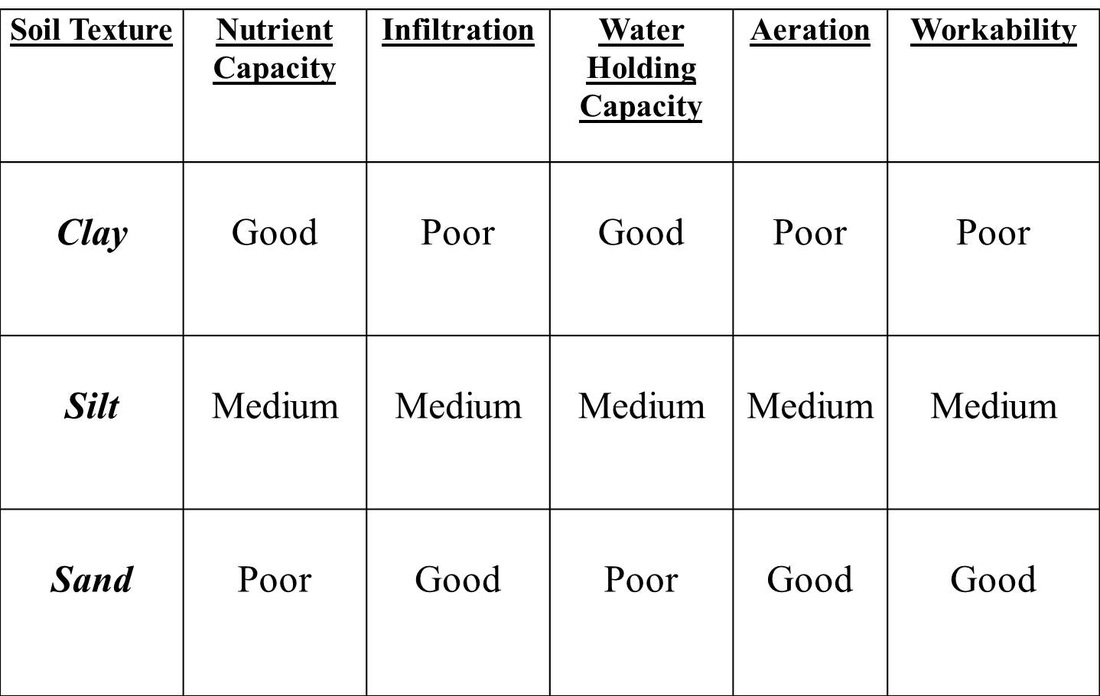 Key Terms
Classroom Materials
Soils article
Simulation Lab: Soils
Soil Types Comparison International Assessment
​
Powerpoint and Notes Adapted from Brad Kremer and Masfar
​​​Correct use of terminology is a key skill in ESS. It is essential to use key terms correctly when communicating your understanding, particularly in assessments. Use the quizlet flashcards or other tools such as learn, scatter, space race, speller and test to help you master the vocabulary.

International-mindedness:
Theory of knowledge:
Videos
Healthy soil is fundamental for functioning ecosystems and critical for our own food and nutritional security. We need to dramatically rethink the important role of soil health and agriculture within the upcoming United Nations Decade on Ecosystem Restoration as well as the climate change agenda
​A new, seven-part video series explores how an increasing number of farmers throughout the country are creating a new hope in healthy soil by regenerating our nation’s living and life-giving soil.
Julia Roberts, Harrison Ford, Edward Norton, Penélope Cruz, Robert Redford and Ian Somerhalder all join forces to give nature a voice.
Excursion into the realms of soil, the number 1 lifegiver on Earth...It's fundamentally important ecological functions, our poor understanding of it as well as our destructive relationship with it. They are so essential to life and thus to us, that our survival is directly dependent on their understanding and protection!
In "Soil Stories", our protagonist, Francine, embarks on a journey of discovery that begins with her realization that soil is alive and that without soil, life as we know would not exist.
In this video Paul Andersen explains how soils are formed and classified. Weathering of rock creates particles which are mixed with water, air, and organic material. Soils are classified according to particle size, chemical makeup, and horizon distribution. A brief discussion of soil loss through erosion, compaction, and salinization is included. ​
Learn all about soil texture and how to test for clay, silt and sand
With the help of sound management practices, water can move into the soil rather than running off. This video describes how and why soils transmit water at different rates
Fred Kirschenmann has been involved in sustainable agriculture and food issues for most of his life. He currently serves as both a Distinguished Fellow at the Leopold Center for Sustainable Agriculture at Iowa State University, and as President of the Stone Barns Center for Food and Agriculture in Pocantico Hills, New York.