Evaluation
​
This criterion assesses the extent to which the student’s report provides evidence of evaluation of the investigation and the results with regard to the research question and the accepted scientific context.​

You must also provide a brief explanation as to how you came to the conclusion from the results.  In other words, sum up the evidence and explain observations, trends or patterns revealed by the data.

Scientific Context:
The results of the experiment should be explained using accurate and relevant biology.  You should compare your results of your investigation with what would be expected; reference published data or theoretical texts. Compare the conclusions with published research or with the general scientific consensus among biologists about the research question.  Do your conclusions conform to the consensus or are they unexpected?  It is not necessary to find an exact same investigation with the exact same results, it is possible to compare findings with another investigation that is different but with results that either confirm or refute those of the student's investigation.

Limitations:
The design and method of the investigation must be commented upon as well as the quality of the data.  You should consider how large your errors or uncertainties are in the results.  How confident are you in the results?  Are you fairly conclusive, or are other interpretations/results possible?

Identify and discuss significant errors and limitations that could have affected the outcome of the experiment.  Were there important variables that were not controlled?  Were there flaws in the procedure which could affect the results?  Are measurements and observations reliable?  Was there a lack of replication?

Emphasis in this section should be on systematic errors, not the random errors that always occur in reading instruments and taking measurements.  Identify the source of error and if possible, tie it to how it likely affected the results.

“Because the simple calorimeter we used was made from a tin can, some heat was lost to the surroundings—metals conduct heat well.  Therefore, the value we obtained for the heat gained by the water in the calorimeter was lower than it should have been.”

Unacceptable Examples:
You must not only list the weaknesses but must also appreciate how significant the weaknesses are. Comments about the precision and accuracy of the measurements are relevant. When evaluating the procedure used, the specifically look at the processes, use of equipment and management of time.

​
Suggestions:
​Suggestions for improvements should be based on the weaknesses and limitations identified.  Modifications to the experimental techniques and the data range can be addressed here. The modifications proposed should be realistic and clearly specified. Suggestions should focus on specific pieces of equipment or techniques used.  It is not sufficient to state generally that more precise equipment should be used. Vague comments such as “I should have worked more carefully” are not acceptable. 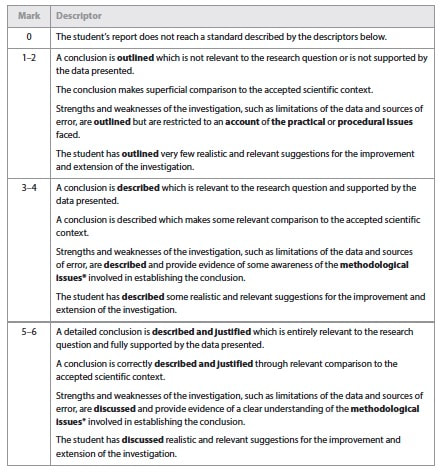