​Topic 9.1: Transport in the Xylem of Plants 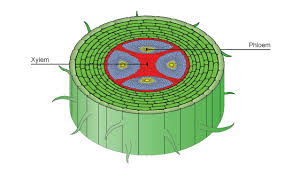 image from BBC Bitesize
In the Transport in the Xylem unit we will learn how plants are able to move water and nutrients from the roots to the leaves. Transpiration is the driving force that moves water through the plant. Transpiration is the evaporation of water from the of water from the surface of leaf cells in actively growing plants. This water is replaced by additional absorption soil leading to a continuous column of water in the plant’s xylem. Plants reduce water loss by closing their stomata, developing thick cuticles, or by possessing leaf hairs to increase the boundary layer. Stomata are quick to respond to environmental cues to protect the plant from losing too much water, but still allowing in enough carbon dioxide to drive photosynthesis.
​
​This unit will last 3 school days
​Essential idea:
​Nature of science:
Understandings
9.1 U 1 ​Transpiration is the inevitable consequence of gas exchange in the leaf.
CO2 is needed for photosynthesis to take place in the leaves and O2 is released as a by-product of this process. Gas exchange between these two gases occurs through the stomata. When the stomata are open and gas is exchanged, water is also lost through transpiration. Guard cells regulate transcription by opening and closing the stomata.. Stomata open and close depending on the turgor pressure in the surrounding guard cells. .When guard cells take in water, the turgor pressure increases, the cells swell causing them to bow outwards, thus opening the stoma.. When the guard cells lose water, the turgor pressure decreases and the guard cells become flaccid, causing the stoma to close. There is also adhesion between water molecules and the inside of the xylem vessels.. Cohesion and adhesion both help maintain the water column all the way up from the root to the leaf.

image from iGcse Biology Revision Notes
9.1 U 2 ​Plants transport water from the roots to the leaves to replace losses from transpiration
Evaporation occurs when some of the light energy absorbed by the leaf is converted to heat, thereby raising the temperature inside the leaf changing the water into water vapour. Transpiration is the evaporation of water from the leaves, stems and flowers. The majority of water lost during transpiration is through openings on the bottom of the leaves called stomata. Transpirational pull results when water evaporates from the leaves and stems. More water is drawn up through the plant to replace the water that is lost. Transpirational pull results from the combined forces of cohesion and adhesion. Water moves into the roots by osmosis through the cell walls (apoplast pathway) and through the cytoplasm (symplast pathway) because the concentration of solutes inside the cells is greater than outside the root cells due to active transport of mineral and ions. 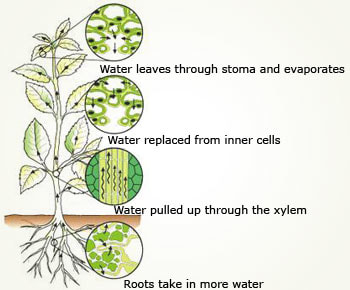 image from wonderwhizkids
9.1 U 3 ​The cohesive property of water and the structure of the xylem vessels allow transport under tension.
Xylem vessels are transport tissue found in vascular plants composed of a number of different types of cell, including long, continuous, thin, usually dead cells known as tracheids and vessel elements. Xylem vessels have a cell wall strengthened with lignin wich thickens and makes them stronger. Since atmospheric pressure is greater than the pressure inside the xylem vessels, the ridged structure prevent them from collapsing.

The xylem is responsible for the transport of water and soluble mineral nutrients from the roots to the different parts of the plants (stems then leaves) that use water. This also allows minerals absorbed from the soil to be transported through the xylem to the leaves

Water molecules cling together by hydrogen bonds between the molecules. This is know as cohesive forces and helps water to to be pulled through the plant. Along with the adhesive forces of water molecules to the xylem walls, a strong tension force is created within the xylem vessel. The cohesive property of the water provides an unbroken column of water in the xylem throughout the plant. Failure to have the cohesive property would stop all flow of water through the xylem vessels. 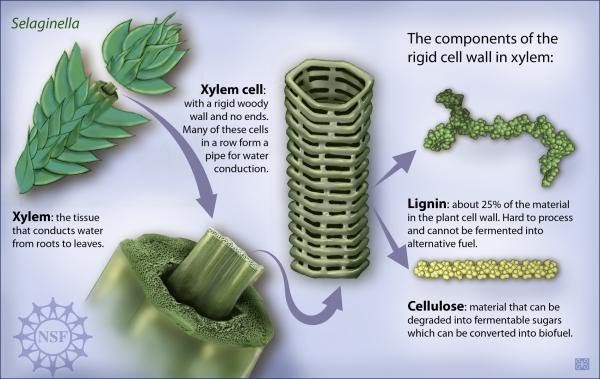 9.1 U 4 ​The adhesive property of water and evaporation generate tension forces in leaf cell walls.
adhesion: 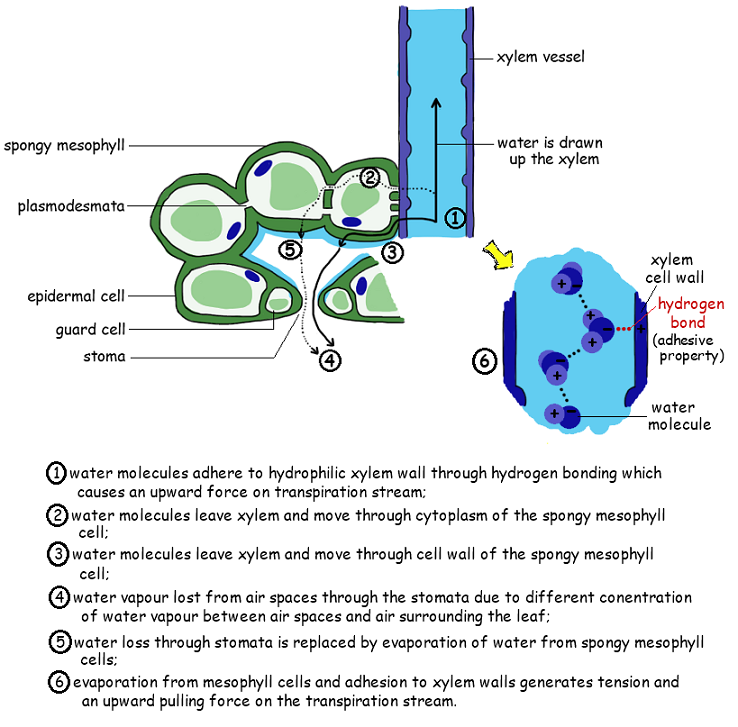 H+ can combine with sucrose, NO3-, PO43-, and other anions to bring them back into the root cell through protein channels, following the concentration gradient established by the proton pumps. K+ ions can flow directly through special channels following the electrochemical gradient created by the proton pumps. Cations such as potassium can also enter the root cell through specialized potassium pumps that use ATP to pump K+ directly into the cell.
Since there is a greater concentration of ions or solutes inside the root cells, water will move into the root cells by osmosis 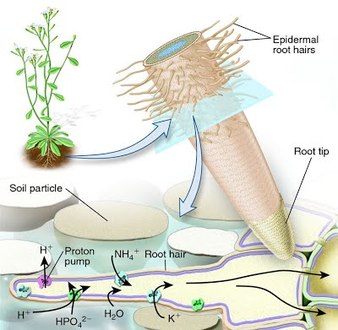 image from Biology Forum
Mineral Uptake Animation
Application
9.1 A 1 ​Adaptations of plants in deserts and in saline soils for water conservation.
Xerophytes are plants that are adapted to grow in very dry conditions.

Halophytes are plants that can tolerate salty conditions (such as marshlands) due to the presence of a number of adaptations
​
Cellular sequestration Tissue partitioning Root level exclusion Salt excretion
Altered flowering schedule – halophytes may flower at specific times (e.g. rainy seasons) to minimise salt exposure 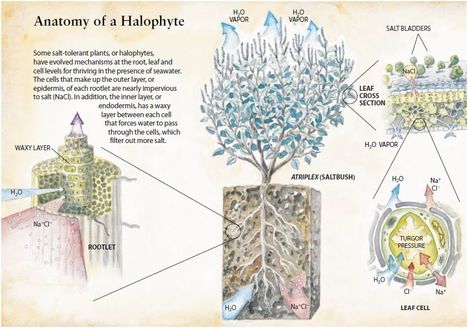 image from www.desertcorp.com
9.1 A 2 ​Models of water transport in xylem using simple apparatus including blotting or filter paper, porous pots and capillary tubing.
The movement of water up the length of the xylem can be modelled using a number of simple apparatus. These include capillary tubing, filter or blotting paper and porous pots
Skills
9.1 S 1 ​Drawing the structure of primary xylem vessels in sections of stems based on microscope images.
When drawing the structure of primary xylem vessels, it is important to remember the following features:
9.1 S 2 ​Measurement of transpiration rates using potometers. (Practical 7)
​A potometer is a device used for measuring the rate of water uptake of a leafy plant shoot. The main reason for water uptake by a cut shoot is transpiration (evaporation in plants) and is affected by the transpiration stream.

image from Pearson
9.1 S 3 ​Design of an experiment to test hypotheses about the effect of temperature or humidity on transpiration rates.
Internal Assessment
Key Terms
Classroom Material


Topic 9.1 Review
​​PowerPoint and Notes on Topic 9.1 by Chris Payne
​​​Correct use of terminology is a key skill in Biology. It is essential to use key terms correctly when communicating your understanding, particularly in assessments. Use the quizlet flashcards or other tools such as learn, scatter, space race, speller and test to help you master the vocabulary.
Useful Links
Transport in Plants Animation - Glenco Education
Review on the Properties of Water - Lumen
Water Movement in Plants - Biology Reference
What is capillary water in the ground? - Groasis
Lab Bench: Transpiration
Virtual Lab Transpiration -

In the News
Sensors applied to plant leaves warn of water shortage - Science Daily, November 8, 2017
​Trees in the Amazon make their own rain  - Science Magazine, Aug. 4, 2017
​Drought-affected trees die from hydraulic failure and carbon starvation - Science Daily, August 7, 2017
​Changing of the guard: Research sheds light on how plants breathe - Science Daily, September 21, 2017
Breakthrough discovery reveals how thirsty trees pull water to their canopies - Science Daily, January 20, 2016
​How Is A 1,600-Year-Old Tree Weathering California's Drought - NPR, October 27, 2016
​As rains ease in the west, cactus shines brighter than ever - New York Times, April 24, 2017
​During drought, dry air can stress plants more than dry soil - Science Daily, ​September 5, 2016
Salt-Loving Super Plants: Saviors of the Planet? - Nature World News, October 31, 2014
The salt-resistant UAE plants that could benefit your health - The National, ​April 11, 2015
Video Clips
Hank introduces us to one of the most diverse and important families in the tree of life - the vascular plants. These plants have found tremendous success and the their secret is also their defining trait: conductive tissues that can take food and water from one part of a plant to another part. Though it sounds simple, the ability to move nutrients and water from one part of an organism to another was a evolutionary breakthrough for vascular plants, allowing them to grow exponentially larger, store food for lean times, and develop features that allowed them to spread farther and faster. Plants dominated the earth long before animals even showed up, and even today hold the world records for the largest, most massive, and oldest organisms on the planet.
Trees create immense negative pressures of 10's of atmospheres by evaporating water from nanoscale pores, sucking water up 100m in a state where it should be boiling but can't because the perfect xylem tubes contain no air bubbles, just so that most of it can evaporate in the process of absorbing a couple molecules of carbon dioxide. Now I didn't mention the cohesion of water (that it sticks to itself well) but this is implicit in the description of negative pressure, strong surface tension etc.
A short clip, adapted from a documentary narrated by Sir Richard Attenborough, on transportation and transpiration in plants.
A great animation on xylem and phloem transport
Stomata and Gas Exchange
In this video Paul Andersen defines water potential and explains how it can be calculated in a simple system.  He explains how water can moved through osmosis and break down the two major parts of water potential (solute potential and pressure potential).  He finishes the video with a sample calculation of solute potential.
Paul Andersen starts by defining transpiration as evaporation off of a leaf. He then describes how a potometer can be used to measure the rate of transpiration in different environments.
Time-lapse video showing a Lophophora diffusa cactus swelling with its first drink of water after a long winter dormancy.
Saguaro Cactus in Arizona by the Arizona Game and Fish Department
Reference sites