image from https://www.tes.com
There are a number of different ways that molecules can pass from one side of a cell membrane to the other. Some such means, like diffusion and osmosis, are natural processes that require no expenditure of energy from the cell and are called passive transport. Other methods of transport do require cellular energy and are called active transport. In addition to these two forms of transport, there exist other forms of transport such as endocytosis and exocytosis, which will be discuss later and do not require the same set of membrane proteins for their function.

In this unit will be looking at how things move “Into and Out of Cells”.
Outline the structure of the plasma membrane

The cell membrane (plasma membrane) is a thin semi-permeable membrane that surrounds the cytoplasm of a cell. Its function is to protect the integrity of the interior of the cell by allowing certain substances into the cell, while keeping other substances out.

Phospholipids form a lipid bilayer in which their hydrophillic (attracted to water) head areas spontaneously arrange to face the aqueous cytosol and the extracellular fluid, while their hydrophobic (repelled by water) tail areas face away from the cytosol and extracellular fluid. The lipid bilayer is semi-permeable, allowing only certain molecules to diffuse across the membrane.

​Across both surfaces of the membrane, various proteins perform roles in keeping the cell functioning. Some adhere to the outer layer and signal other cells, some adhere to the inside and act as enzymes to speed up chemical reactions, and some pass through the membranes and act to transport molecules across the membrane into and out of the cell 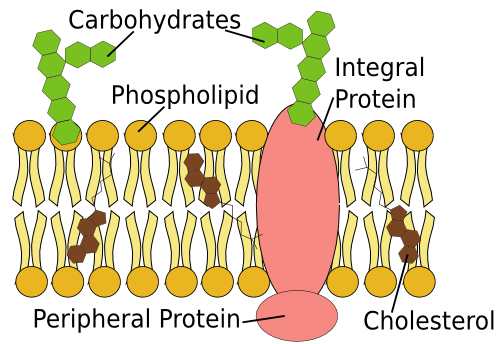 Explain how substances move into  and out of cell 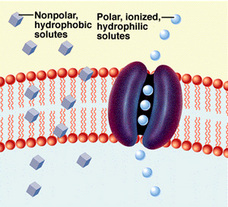 Cell membranes act as barriers to most, but not all, molecules. Development of a cell membrane that could allow some materials to pass while constraining the movement of other molecules was a major step in the evolution of the cell. Cell membranes are differentially (or semi-) permeable barriers separating the inner cellular environment from the outer cellular (or external) environment.

Cell transport refers to the movement of substances across the cell membrane. Probably the most important feature of a cell's phospholipid membranes is that they are selectively permeable. A membrane that is selectively permeable, or semipermeable, has control over what molecules or ions can enter or leave the cell,

​Water potential is the tendency of water to move from an area of higher concentration to one of lower concentration. Energy exists in two forms: potential and kinetic. Water molecules move according to differences in potential energy between where they are and where they are going. need to take in useful substances and remove other substances, such as waste, in order to function effectively.

Exchange of materials occurs between the cell and its surrounding environment across the cell membrane. Depending on the circumstances, this is achieved via three transport processes - diffusion, osmosis and active transport. To make exchange as efficient as possible, larger organisms have evolved specialized exchange surfaces
Identify the factors that affect the rate  of movement of substances into and out of cells, to include the effects of  surface area to volume ratio, temperature and concentration gradient

image from cnx.org
Compare and contrast passive and active transport
Both active and passive transport move materials and can cross biological membranes. 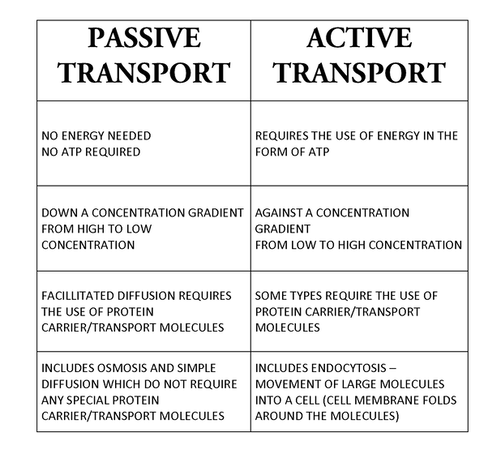 image from en.wikipedia.org
​The membrane’s lipid bilayer structure provides the first level of control. The phospholipids are tightly packed together, and the membrane has a hydrophobic interior. This structure causes the membrane to be selectively permeable. A membrane that has selective permeability allows only substances meeting certain criteria to pass through it unaided. In the case of the cell membrane, only relatively small, nonpolar materials can move through the lipid bilayer
​
​ 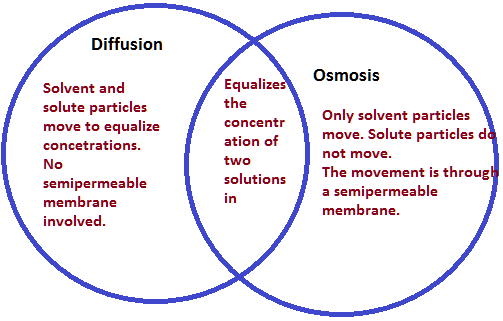 Osmosis Animation
Distinguish among hypotonic, hypertonic, and isotonic solutions.
​The ability of an extracellular solution to make water move into or out of a cell by osmosis is know as its tonicity. A solution's tonicity is related to its osmolarity, which is the total concentration of all solutes in the solution

Isotonic solution - equilibrium with its surroundings, meaning the solute concentrations inside and outside are the same (iso means equal in Latin). In this state there is no concentration gradient and therefore, no large movement of water in or out. Water molecules do freely move in and out of the cell, however, and the rate of movement is the same in both directions.

Hypotonic solution  - has a lower solute concentration than inside the cell (the prefix hypo is Latin for under or below). The difference in concentration between the compartments causes water to enter the cell. Plant cells can tolerate this situation better than animal cells. In plants, the large central vacuole fills with water and water also flows into the intercellular space. The combination of these two effects causes turgor pressure which presses against the cell wall causing it to bulge out. The cell wall helps keep the cell from bursting. However, if left in a highly hypertonic solution, an animal cell will swell until it bursts and dies.

Hypertonic solutions  - has a higher solute concentration than inside the cell. In Latin, the prefix hyper means over or above.  It causes water to rush out making the cell wrinkle or shrivel. This is clearly seen in red blood cells undergoing a process called crenation. Plant cells in a hypertonic solution can look like a pincushion because of what’s going on inside. The cell membrane pulls away from the cell wall but remains attached at points called plasmodesmata. Plasmodesmata are tiny channels between plant cells that are used for transport and communication. When the inner membrane shrinks, it constricts the plasmodesmata resulting in a condition called plasmolysis.

Water is very important in supporting a plant. Water enters cells by osmosis. This makes the cell swell and become firm, due to the increased pressure inside the cell. This pressure pushes against the cell wall. The cell wall is strong enough to withstand this pressure, so it does not burst. The cell is said to be turgid or firm.
When lots of plant cells are turgid they push against each other and support the plant. If a plant is short of water it begins to wilt. This is because the cells lose water and become soft or flaccid. The vacuole is smaller and the pressure inside the cell is low so the cells do not push against each other to provide support.
Explain how substances move against a concentration gradient
Explain:  Give a detailed account of causes, reasons or mechanisms 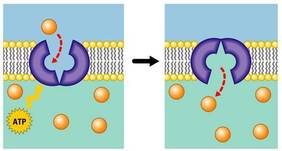 Active transport is the process by which dissolved molecules move across a cell membrane from a lower to a higher concentration. In active transport, particles move against the concentration gradient - and therefore require an input of energy from the cell.

The Sodium-Potassium Pump is a structure known as a cell-membrane pump that uses energy to transport Sodium and Potassium ions in and out of the cell.  There are other varieties of cell membrane pump, however the sodium-potassium pump plays a vital role in maintaining a cell's homeostasis.

The pump is powered by a molecule of ATP.  The ATP allows the shape of the pump to change, emptying its contents either into or out of the cell.  Below are the steps that the sodium-potassium pump uses to function: 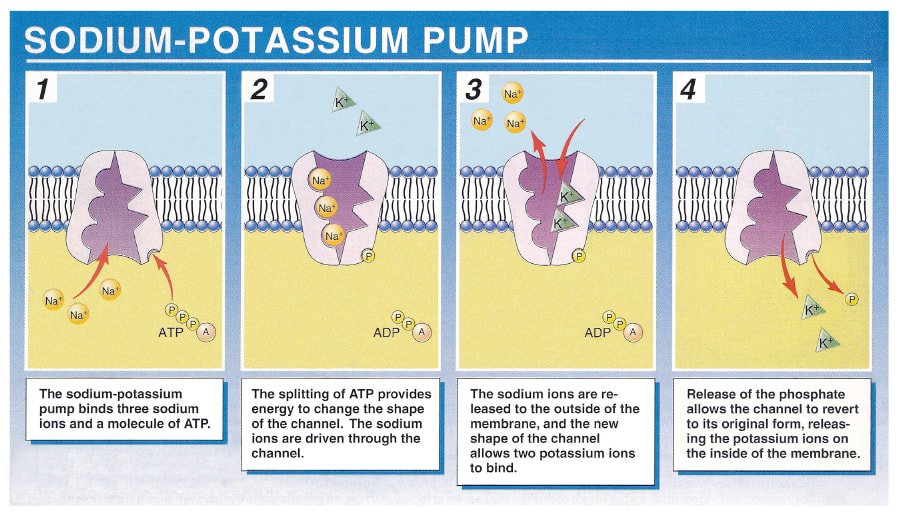 https://online.science.psu.edu/biol011_sandbox_7239/node/7401
Sodium=Potassium Pump Animation
Describe the primary mechanisms by which cells import and export macromolecules
Some molecules or particles are just too large to pass through the plasma membrane or to move through a transport protein. So cells use two other active transport processes to move these macromolecules (large molecules) into or out of the cell. Vesicles or other bodies in the cytoplasm move macromolecules or large particles across the plasma membrane. There are two types of vesicle transport, endocytosis and exocytosis

Endocytosis, on the other hand, is the process by which materials move into the cell. There are three types of endocytosis: phagocytosis, pinocytosis, and receptor-mediated endocytosis. In phagocytosis or “cellular eating,” the cell’s plasma membrane surrounds a macromolecule or even an entire cell from the extracellular environment and buds off to form a food vacuole or phagosome. The newly-formed phagosome then fuses with a lysosome whose hydrolytic enzymes digest the “food” inside.

In exocytosis, materials are exported out of the cell via secretory vesicles. In this process, the Golgi complex packages macromolecules into transport vesicles that travel to and fuse with the plasma membrane. This fusion causes the vesicle to spill its contents out of the cell. Exocytosis is important in expulsion of waste materials out of the cell and in the secretion of cellular products such as digestive enzymes or hormones. 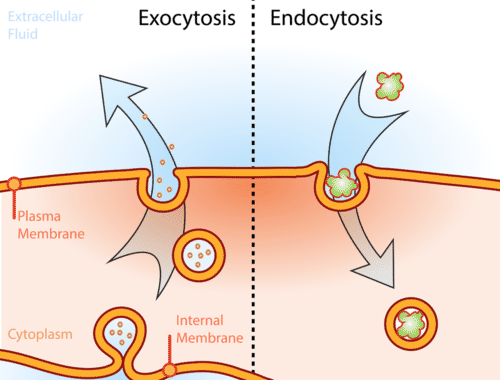 https://www.ck12.org/biology/exocytosis-and-endocytosis/lesson/Exocytosis-and-Endocytosis-BIO/
Eno and Exocytosis Animation
Key Terms
Class Materials
Cellular Movement (study guide)
Diffusion and Osmosis worksheet
Osmosis in Plants worksheet
Osmosis and Diffusion Venn Diagram
Diffusion and Osmosis practical
Denaturation Article
​​Correct use of terminology is a key skill in Biology. It is essential to use key terms correctly when communicating your understanding, particularly in assessments. Use the quizlet flashcards or other tools such as learn, scatter, space race, speller and test to help you master the vocabulary
Helpful Links


Video Clips
Part 4 Cell Membrane
Part 5 Passive Transport (Diffusion and Osmosis)
Part 6 Active Transport
Explore the parts of the cell membrane with The Amoeba Sisters! Video discusses phospholipid bilayer, cholesterol, peripheral proteins, integral proteins, glycoproteins, and glycolipids - as well as why the surface area to volume ratio is so important in cells. Expand for table of contents
​Cell membranes are way more complicated than you think
​The cell membrane, like a good jacket, protects the cell from everything outside of it. How is it simultaneously sturdy, flexible, and capable of allowing the right things to pass through? Ethan Perlstein rediscovers the scientists and their research that have changed the way we study the membrane and the cell as a whole
In this video we are going to discover how cells take in useful substances and remove waste using three methods of transportation: diffusion, osmosis and then in the second part we will look at active transport.
Hank describes how cells regulate their contents and communicate with one another via mechanisms within the cell membrane.
Explore the process of osmosis in this updated Amoeba Sisters video! Video features real life examples of osmosis, important vocab, and introduces concept of water potential and turgor pressure in plant cells.
Explore the types of passive and active cell transport with the Amoeba Sisters!
Explore how substances travel in diffusion with the Amoeba Sisters! This video uses a real life example and mentions concentration gradients, passive transport, facilitated diffusion, and explains why diffusion is critical for all organisms.
In the first part of this video we looked at diffusion to move gases and osmosis for the movement of water, from high concentration to low concentration down their concentration gradient.
Explore the sodium potassium pump (Na+/K+ pump), with the Amoeba Sisters! This video talks about why this pump is needed and provides an overview of this type of active transport