In this unityou are introduced to cells. All living organisms are composed of cells. A cell is a small, membrane-bound compartment that contains all the chemicals and molecules that help support an organism's life. An understanding of the structure of cells is one of the first steps in comprehending the complex cellular interactions that direct and produce life.

Cells can be thought of as building blocks of organisms.


How does life perpetuate itself? How do cells work? Answers to these questions and many others can be found in the resource collection below.

​It can be broken down into the following main topics:
Describe why cells have limited size 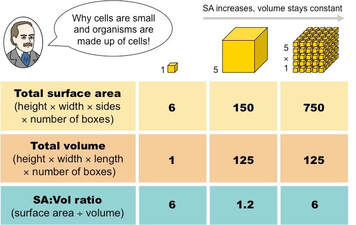 image from BioNinja
Cells are microscopic, meaning they can't be seen with the naked eye. Although it might seem logical for an organism to be made of one giant cell, our cells are specialized: they have unique jobs in the body.

There are physiological limits to how big a cell can grow. The scale, or size of a cell compared to other objects, is incredibly small. Cells are microscopic mostly because of this constraint.

As a cell grows, its volume increases more quickly than its surface area. If a cell was to get very large, the small surface area would not allow enough nutrients to enter the cell quickly enough for the cell's needs.

Smaller single-celled organisms have a high surface area to volume ratio, which allows them to rely on oxygen and material diffusing into the cell (and wastes diffusing out) in order to survive. The higher the surface area to volume ratio they have, the more effective this process can be. Larger animals require specialized organs (lungs, kidneys, intestines, etc.) that effectively increase the surface area available for exchange processes, and a circulatory system to move material and heat energy between the surface and the core of the organism.

Large cells have a way of dealing with some size challenges. Big cells, such as some white blood cells, often grow more nuclei so that they can supply enough proteins and RNA for the cell's requirements. Large, metabolically active cells often have lots of cell protrusions, resulting in many folds throughout the membrane. These folds increase the surface area available for transport of materials into or out of the cell. Such cell types are found lining your small intestine, where they absorb nutrients from your food through protrusions called microvilli.

Scale of Measurements
Surface area refers to the outside area of an object, e.g. it is the area around the outside of a cell. Unit = cm2.

Volume refers to the amount of space inside of the object, e.g. it is the space inside the cell. Unit = cm3.
​​Intestinal tissue of the digestive tract may form a ruffled structure (villi) to increase the surface area of the inner lining
Aveoli within the lungs have membranous extensions called microvilli, which function to increase the total membrane surface
Outline the cell theory 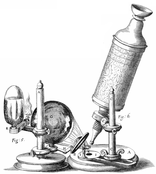 image from en.wikipedia.org
The cell theory is a scientific theory which describes the properties of cells. Cells are the basic unit of structure in all organisms and also the basic unit of reproduction. Credit for the formulation of this theory is given to German scientists Theodor Schwann, Matthias Schleiden, and Rudolph Virchow.

The Cell Theory states:
Outline the differences between prokaryotic and eukaryotic cells

All living things can be divided into three basic domains: Bacteria, Archaea and Eukarya. The primarily single-celled organisms found in the Bacteria and Archaea domains are known as prokaryotes. These organisms are made of prokaryotic cells — the smallest, simplest and most ancient cells.

​Organisms in the Eukarya domain are made of the more complex eukaryotic cells. These organisms, called eukaryotes, can be unicellular or multicellular and include animals, plants, fungi and protists. Many people are unclear on whether yeasts or fungi are prokaryotes or eukaryotes. Both are eukaryotes and share similar cell structure to all other eukaryotes 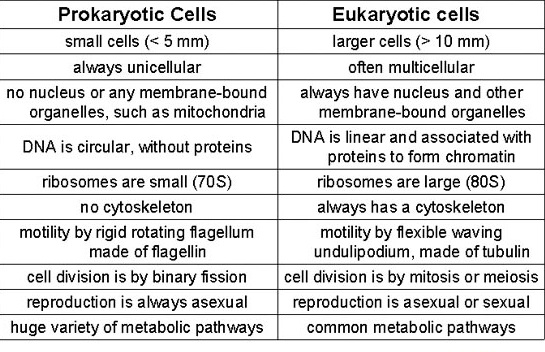 ​
Describe cell structures and functions of a prokaryotic cell

Prokaryotes are single-celled organisms that are the earliest and most primitive forms of life on earth. As organized in the Three Domain System, prokaryotes include bacteria and archaeans.

At 0.1 to 5.0 μm in diameter, prokaryotic cells are significantly smaller than eukaryotic cells, which have diameters ranging from 10 to 100 μm.

Prokaryotic organisms have varying cell shapes. The most common bacteria shapes are spherical, rod-shaped, and spiral. 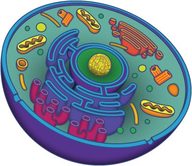 Cells have particular structures or organelles that perform specific jobs. These structures perform the life activities within the cell. Just as body systems are coordinated and work together in complex organisms, the cells making up those systems must also be coordinated and organized in a cooperative manner so they can function efficiently together.

Inside the cell a variety of cell organelles, formed from many different molecules, carry out the transport of materials, energy capture and release, protein building, waste disposal, and information storage. Each cell is covered by a membrane that performs a number of important functions for the cell as well. 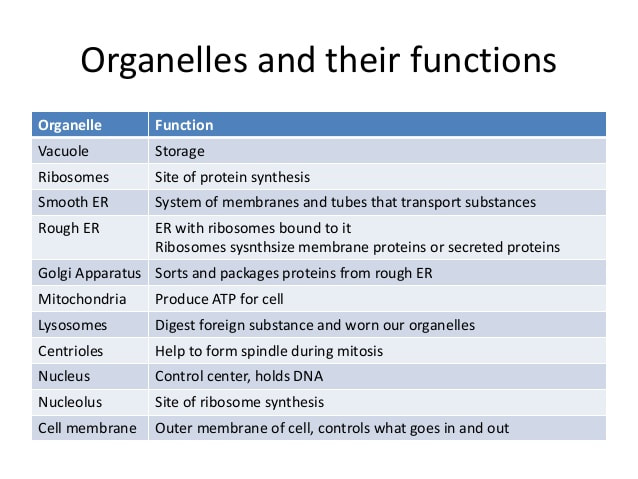 Compare and contrast  the structures of plant and animal  cells 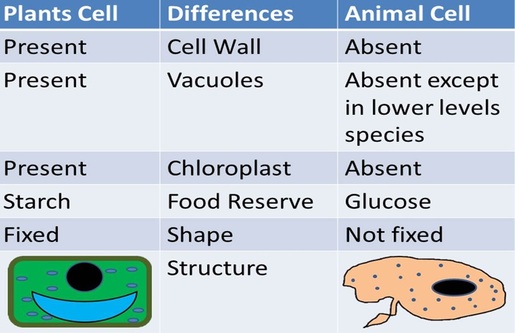 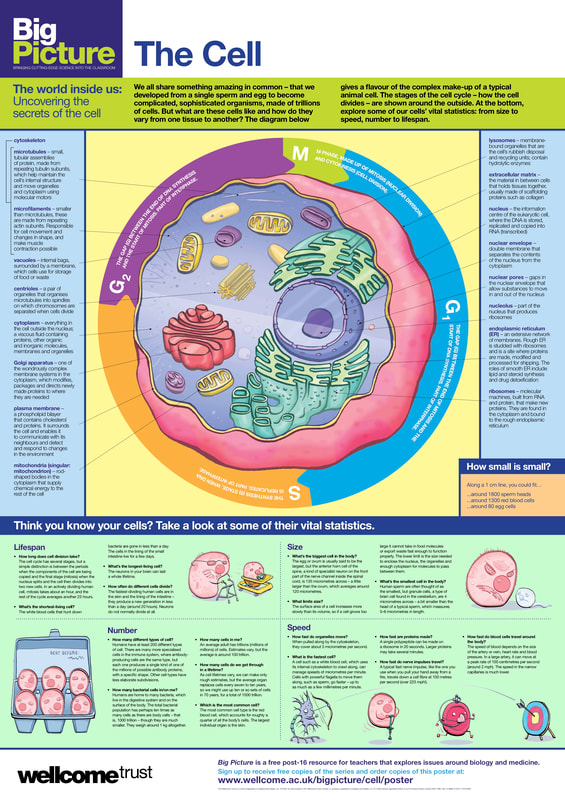 State that specialized tissues can develop by cell differentiation in multicellular organisms
Every cell in a multicellular organism contains all genes of that organism. However, not all of those genes are activated in every cell or at the same time. When the gene is activated, the gene will encode for specific proteins. These proteins will affect the structure and function of cells.

​By activating certain genes and not others, the cells are able to differentiate and form specialized tissues. ​Differentiation depends on gene expression which is regulated mostly during transcription. It is an advantage for multicellular organisms as cells can differentiate to be more efficient unlike unicellular organisms who have to carry out all of the functions within one cell.

In development after the zygote divides to form the blastocyst ( around 120-130 cells), and then the gastrula, which is differentiated into several dermal layers of cells (mesoderm, endoderm, ectoderm, and germ cells) that form into specific specialized cells.Most cells share features such as having a nucleus, a cell membrane, cytoplasm and mitochondria.

There are differences between cells, too. Each type of cell, has its own job to do. These cells have special features that allow them to perform their functions effectively. Here are some examples of specialized cells and the features they have to help them with their role

https://www.seekpng.com/ipng/u2w7r5u2e6w7a9t4_specialized-cells/
​Identify the capacity of stem cells to divide and differentiate along different pathways is necessary in embryonic development
Stem cells are the body’s natural reservoir – replenishing stocks of specialized cells that have been used up or damaged.Stem cells have the unique ability to produce both copies of themselves (self-renewal) and other more specialized cell types (differentiation) every time they divide. Stem cells, therefore, are essential to the maintenance of tissues such as blood, skin, and gut that undergo continuous turnover (cell replacement), and muscle, which can be built up according to the body's needs and is often damaged during physical exertion. 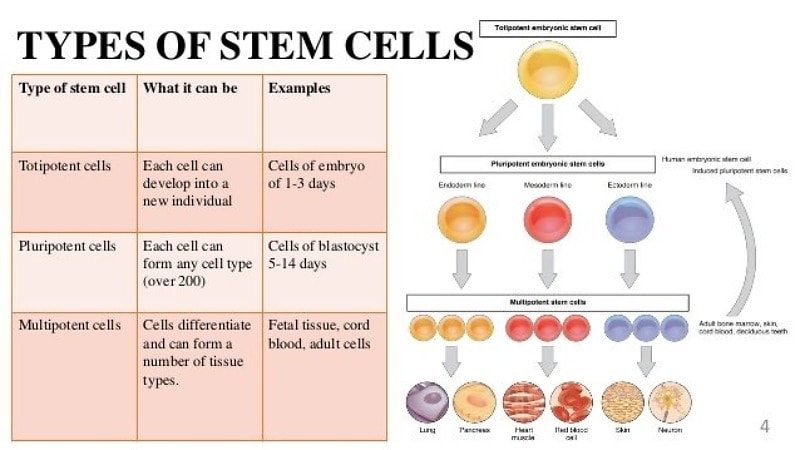 ​Describe the medical uses for stem cells
​Stem cells are the body's raw materials — cells from which all other cells with specialized functions are generated. Under the right conditions in the body or a laboratory, stem cells divide to form more cells called daughter cells.

Researchers and doctors hope stem cell studies can help to: 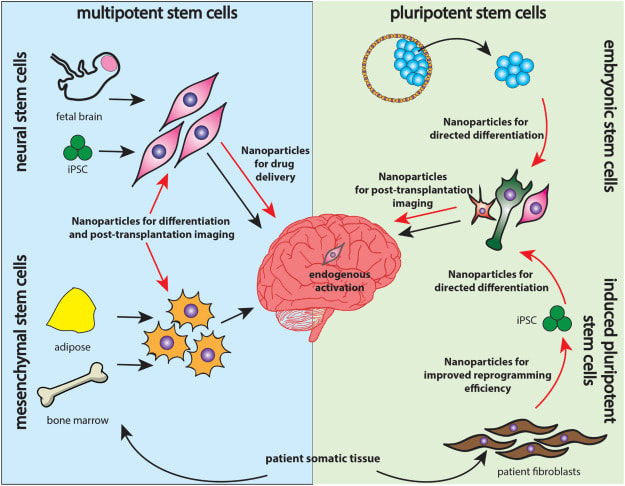 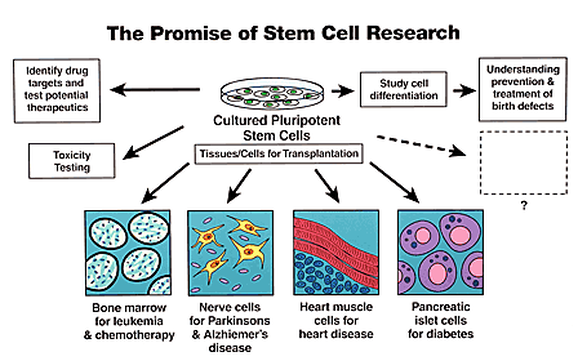 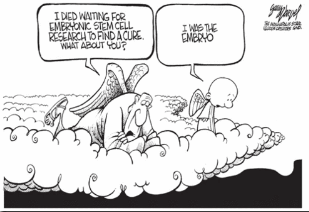 Many parties continue to have strong opinions that trigger ongoing debates about stem cell research, and the following pros and cons provide a snapshot of some the points on each side of the issue.
​Use of adult-derived stem cells—known as induced pluripotent stem cells (IPSCs)—from blood, cord blood, skin, and other tissues have been demonstrated as effective in treating different diseases in animal models. Umbilical cord-derived stem cells obtained from the cord blood also have been isolated and used for various experimental treatments. Another option is uniparental stem cells. Although these cell lines are shorter-lived than embryonic cell lines, uniparental stem cells hold vast potential if enough research money can be directed that way: pro-life advocates do not technically consider them individual living beings.

Cells
Cell size and scale Learn Genetics
Cells and Cellular Structure from Biology4Kids
Bacteria Cell Structure from BBC Bitesize
Cell Animation
Cells Alive
Check out this video clip on Mitochondria
Click here for an audio presentation about cells from the Naked Scientists
Video clip Mitochondria
Cell structure and function interactive activity – from Wiley Education
The Cell: Basic Unit of Structure and Function by McGraw-Hill. Animations, quizzes, flashcards, and other resources aligned with their Human Anatomy textbook. Links to other chapters can be found in the sidebar.
Cells Alive!

​​Correct use of terminology is a key skill in Biology. It is essential to use key terms correctly when communicating your understanding, particularly in assessments. Use the quizlet flashcards or other tools such as learn, scatter, space race, speller and test to help you master the vocabulary
​Video Clips
Surface Area to Volume Ratio Explained
Stephanie Castle discusses Surface area to volume ratio is important in the limitation of cell size
Prokaryotic Cells
Eukaryotic Cells
Compares and contrasts prokaryote cells and eukaryote cells before exploring organelle structures and functions! Video includes the modern cell theory and plant vs. animal cell comparisons.
​This Amoeba Sisters video starts with providing examples of prokaryotes and eukaryotes before comparing and contrasting prokaryotic cells with eukaryotic cells!
Hank describes why plants are so freaking amazing - discussing their evolution, and how their cells are both similar to & different from animal cells.
Hank tells us about the city of Eukaryopolis - the animal cell that is responsible for all the cool things that happen in our bodies
Scientific discovery isn't as simple as one good experiment. The weird and wonderful history of cell theory illuminates the twists and turns that came together to build the foundations of biology.
Explore some examples of specialized plant and animal cells with the Amoeba Sisters! Video explains how specialized cell structure suits their function
How do cells in your body differentiate into other types of cells? Explore cell specialization featuring stem cells and their role in cell differentiation.
Hank gives you the facts on stem cells - what they are, what they're good for, where they come from, and how they're used in medicine
Learn about the science of stem cells and how these incredible, transforming cells could lead to personalized medicine for individual bodies
​Every single one of us is affected by diseases which stem cells could potentially treat in the future. Dr. Crystal Ruff explains what stem cells are and how they are changing the way we treat diseases