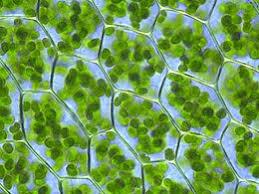 In the Photosynthesis unit we will expand our knowledge from Topic 2.9. We will explore the structure of the chloroplast and identify how it is adapted to absorb light energy.  We will also identify specific metabolic pathways of the light dependent and light independent reactions

​This unit will last 5 school days
​Essential idea:
​Nature of science:
Understandings
8.3 U 1 ​Light-dependent reactions take place in the thylakoid membranes and the space inside them.
Photosynthesis is the process by which cells synthesise organic molecules (e.g. glucose) from inorganic molecules (CO2 and H2O) in the presence of sunlight. This process requires a photosynthetic pigment (chlorophyll) and can only occur in certain organisms (plants, some bacteria). In plants, photosynthesis occurs within a specialised organelle called the chloroplast 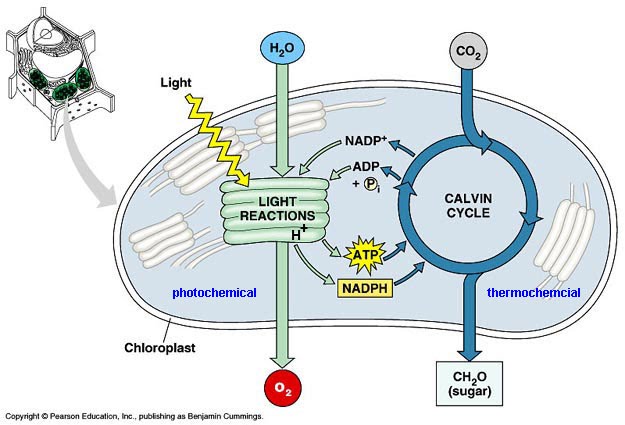 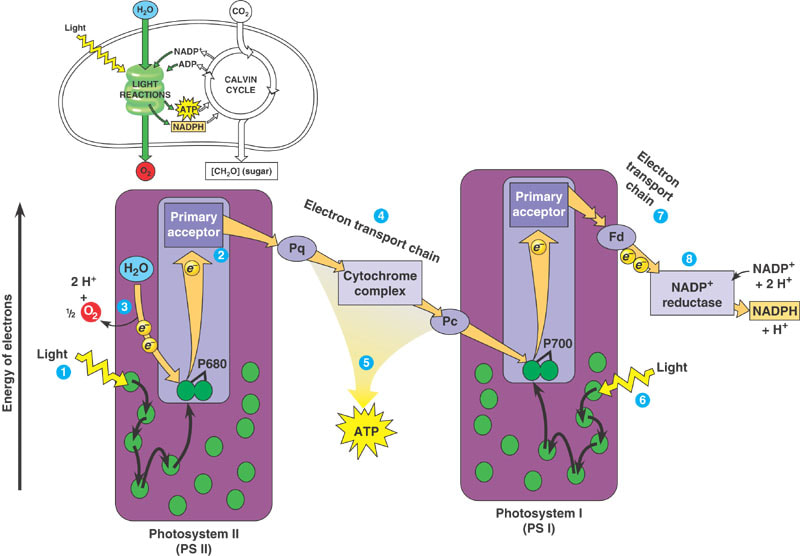 image from www.cas.miamioh.edu
8.3 U 3 ​Reduced NADP and ATP are produced in the light-dependent reactions.
The production of ATP by the light dependent reactions is called photophosphorylation, as it uses light as an energy source. Photophosphorylation may be either a cyclic process or a non-cyclic process
​This process is the first stage of photosynthesis in which light energy is converted into chemical energy (NADPH and ATP). These products will be used in the light independent stage. 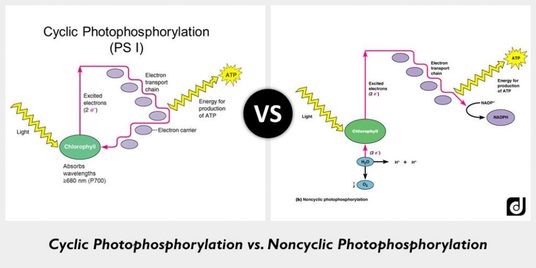 image from Difference Between
8.3 U 4 ​Absorption of light by photosystems generates excited electrons.
​The light dependent reactions use photosynthetic pigments (organised into photosystems) to convert light energy into chemical energy (specifically ATP and NADPH)
​

image from Khan Acadamy
8.3.U 5 ​Photolysis of water generates electrons for use in the light-dependent reactions.
The lost electrons are replaced by the splitting of water through a process called photolysis. During this reaction oxygen is produced and released as a by-product.

image from butane.chem.uiuc.edu
8.3 U 6 ​Transfer of excited electrons occurs between carriers in thylakoid membranes.
The electron moves along a series of electron carriers through a series of redox reactions from photosystem II (PSII) to photosystem I (PSI) 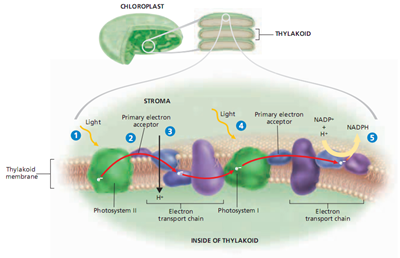 8.3 U 7 ​Excited electrons from Photosystem II are used to contribute to generate a proton gradient.
As electrons move down the electron transport chain they lose energy. This energy is used to pump H+ (protons) across the thylakoid membrane into the thylakoid space. This creates an H+ concentration gradient and the potential energy needed, that will drive chemiosmosis and produce ATP from ADP during photophosphorylation (similar to oxidative phosphorylation in mitochondria). The photolysis of water also helps create the proton gradient as H+ is produced when water is split

8.3 U 8 ATP synthase in thylakoids generates ATP using the proton gradient.
The production of ATP from ADP and phosphate using energy derived from light is called photophosphorylation.. Photophosphorylation occurs on the thylakoid membrane of the chloroplasts. 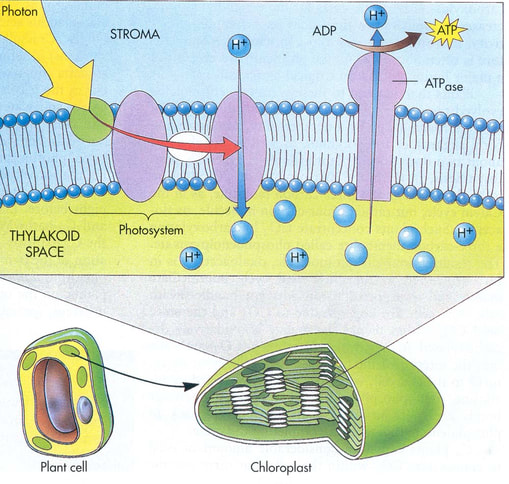 Electron Transport and ATP Synthesis Animation
8.3 U 9​ Excited electrons from Photosystem I are used to reduce NADP. 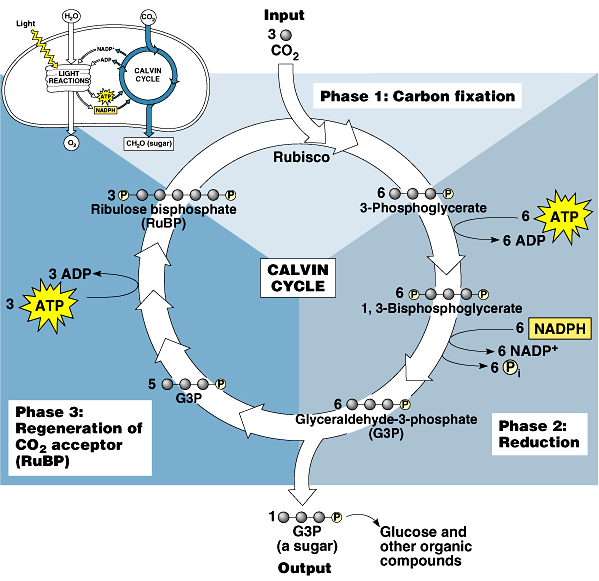 image from www.hammiverse.com
8.3 U 11 ​Triose phosphate is used to regenerate RuBP and produce carbohydrates.
synthesis of carbohydrates and other products:
8.3.U 12 ​Ribulose bisphosphate is reformed using ATP.
Two TP molecules are used to produce one six carbon glucose phosphate molecule, which can eventually be combined with other glucose phosphate to form starch.
8.3 U 12 ​The structure of the chloroplast is adapted to its function in photosynthesis. 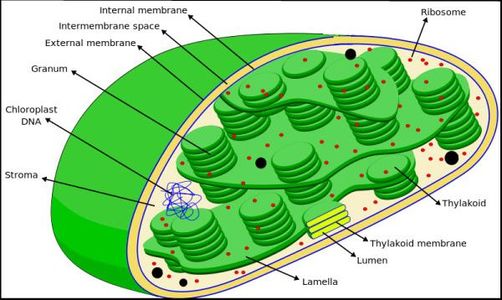 Calvin Cycle Animation
Application
8.3 A 1 ​Calvin’s experiment to elucidate the carboxylation of RuBP.
​The light independent reactions are also collectively known as the Calvin cycle – named after American chemist Melvin Calvin. Calvin mapped the complete conversion of carbon within a plant during the process of photosynthesis. ​The experiments performed by Melvin Calvin explained the process that plants use to make food. Radioactively labeled carbon was introduced into algae and analyzed to see where it would be found in the cells by the use of two-dimensional paper chromatography. The results of these experiments showed that carbon dioxide was converted to carbohydrates during the light-independent reactions of photosynthesis. 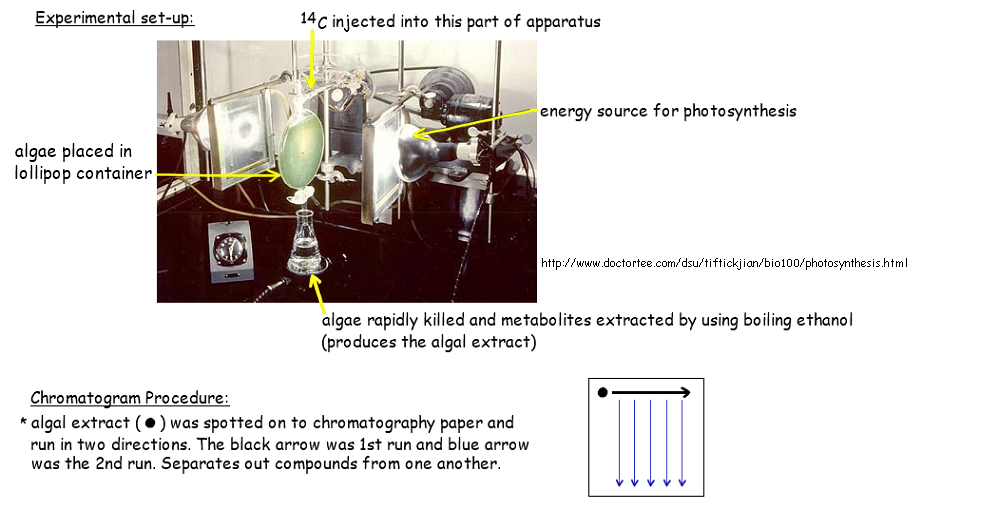 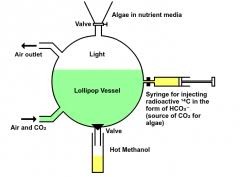 Melvin Calvin
Skill
8.3 S 1 ​Annotation of a diagram to indicate the adaptations of a chloroplast to its function.
Electron micrographs of a chloroplast may differ in appearance depending on where the cross-section occurs
Typically, chloroplast diagrams should display the following features: 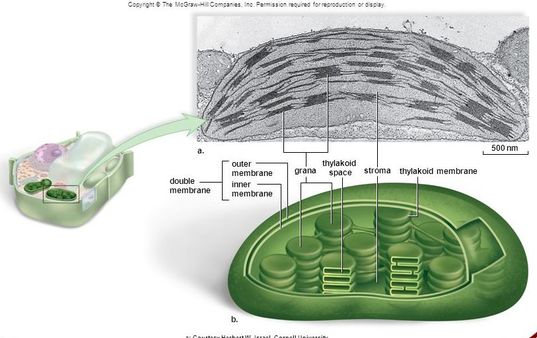 ​Topic 8.3 Review
​​PowerPoint and Notes on Topic 8.3 by Chris Payne
​​​Correct use of terminology is a key skill in Biology. It is essential to use key terms correctly when communicating your understanding, particularly in assessments. Use the quizlet flashcards or other tools such as learn, scatter, space race, speller and test to help you master the vocabulary.
Useful Links

Molecular system for artificial photosynthesis, Science Daily, June 2, 2017
Australian scientists are a step closer to converting sunlight and water into fuel, Science Alert, August 27, 2014
TOK
Video Clips
Learn how the light dependent and light independent cycles work together to create glucose for plants.
We get energy by eating other organisms, but plants don't have to do that. They can build their own food out of water, carbon dioxide, and sunlight. I'm sure you've heard of photosynthesis before, but let's take a look at some of the finer points, shall we?
A hearty bowl of cereal gives you the energy to start your day, but how exactly did that energy make its way into your bowl? It all begins with photosynthesis, the process that converts the air we breathe into energizing glucose. Cathy Symington details the highly efficient second phase of photosynthesis -- called the Calvin cycle -- which converts carbon dioxide into sugar with some clever mix-and-match math.
The Calvin Experiment
Reference sites