image from Khan Acadamy
​In the Natural Selection unit we will look at the theory of evolution by means of natural selection as proposed by Charles Darwin and Alfred Walls. Their explanation remains a theory because it can never be completely proven but there is an abundance of evidence to support the dey ideas.
​
​  The unit is planned to take 3 school days.
​Essential idea:
​Nature of science:
Understandings:
5.2.U1 Natural selection can only occur if there is variation among members of the same species.​ (Oxford Biology Course Companion page 250)
The theory of natural selection was posited by Charles Darwin (and also Alfred Wallace) who described it as ‘survival of the fittest’. According to this theory, it is not necessarily the strongest or most intelligent that survives, but the ones most responsive to change. Within a species, different individuals of that species show genetic variation.

Individuals that are best suited for their environment will survive and reproduce. If there was no variation within a species, then all individuals would be the same and no individual would be favoured over the other and natural selection would not take place.
​
The process of natural selection occurs in response to a number of conditions: 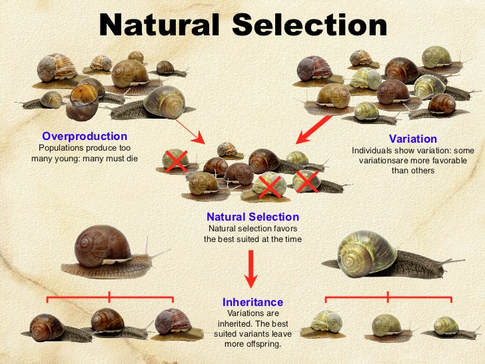 5.2.U2 Mutation, meiosis and sexual reproduction cause variation between individuals in a species.​
(Oxford Biology Course Companion page 250)
​Natural selection requires variation among members of a species in order to differentiate survival (variation needed for selection). This variation can manifest as either discontinuous (distinct classes) or continuous (range across a characteristic spectrum)

image from bbc bitesize
5.2.U3 Adaptations are characteristics that make an individual suited to its environment and way of life.(Oxford Biology Course Companion page 250)
Adaptations are features of organisms that aid their survival by allowing them to be better suited to their environment adaptations may be classified in a number of different ways: 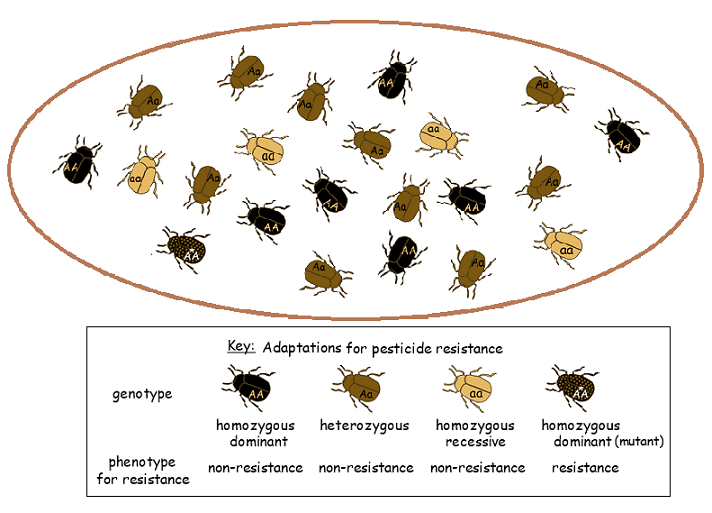 ​Populations tend to produce more offspring than the environment can supporter that could survive in a particular community or ecosystem. For example, fish produce thousands of eggs but only few make it to adulthood.

Plants also can produce hundreds or thousands of seeds to be released into the environment. When parents don’t spend a lot or even any time caring for their young, they produce many offspring. This is a reproductive method used to make sure some offspring make it to the next generation. Parents that put a lot of time and energy protecting and raising their young tend to have far smaller litters, i.e. most mammals.

The population density that the environment can support is called the carrying capacity. If there are too many organisms, the demand for resources increases. However, there is a limited supply of resources in an ecosystem.
Overpopulation and a limited amount of resources creates competition within a population. 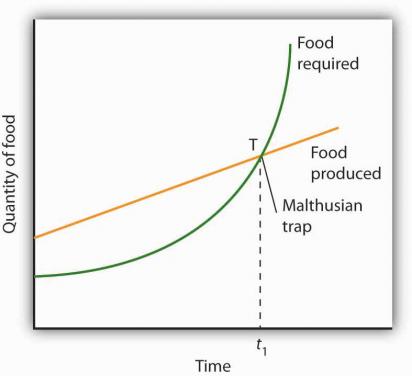 image from http://songsaboutfoodandtravel.blogspot.com/
5.2.U5 Individuals that are better adapted tend to survive and produce more offspring  the less well adapted tend to die or produce fewer offspring.​ (Oxford Biology Course Companion page 252)
Within a population, there is genetic variation between the individuals in the population. The organisms with the beneficial characteristics will be able to out-compete the other individuals with the less beneficial or harmful genetic traits for limited resources and mates. Therefore, these individuals will survive and reproduce and pass these genetic traits onto the next generation of offspring.
​
Organisms with less desirable traits will die or produce less offspring 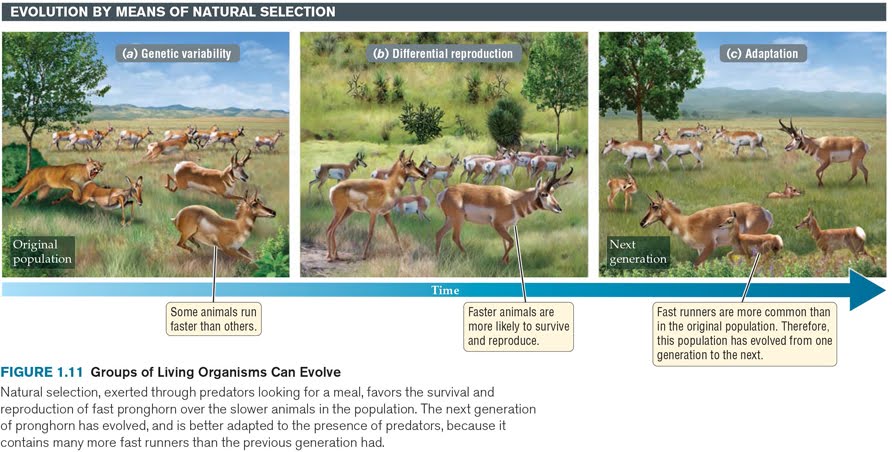 5.2.U6 Individuals that reproduce pass on characteristics to their offspring.​ (Oxford Biology Course Companion page 252)
[Students should be clear that characteristics acquired during the lifetime of an individual are not heritable. The term Lamarckism is not required.]​​
Survival in the struggle for existence is not random, but depends in part on the hereditary constitution of the surviving individuals. Those individuals whose inherited characteristics best fit them to their environment are likely to leave more offspring than less-fit individuals (= natural selection).
this unequal ability of individuals to survive and reproduce will lead to a gradual change in a population, with the inheritance of favorable characteristics accumulating over the generations.
In other words: Natural selection is differential success in reproduction ( unequal ability of individuals to survive and reproduce).

These organisms that survive and reproduce, pass these beneficial traits onto their offspring. Over many generations the accumulation of these beneficial genetic traits may result in a change in the population known as evolution.
For another species to develop, these genetically different individuals eventually have to become reproductively isolated (separated from the general population) where they will only reproduce with individuals with similar genetic traits.
Acquired characteristics of an individual such as large muscles are not passed on to an organism’s offspring 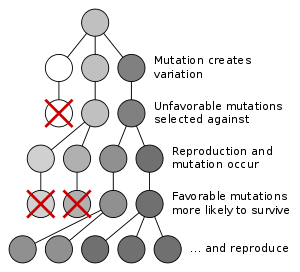 5.2.U7 ​Natural selection increases the frequency of characteristics that make individuals better adapted and decreases the frequency of other characteristics leading to changes within the species. Oxford Biology Course Companion page 252)​
Evolution is the cumulative change in the heritable characteristics of a population, or the changes in allelic frequencies in the gene pool of a population over time, as a result of natural selection, genetic drift, gene flow, and mutation pressure

Since the better adapted individuals of a species are the ones that survive, reproduce and pass their genes on to the next generation, these alleles will become more frequent within the population. The same would hold true for individuals that are less suited to an environment. These individuals will reproduce less frequently and die more often, thus decreasing the frequency of their alleles within a population. These changes happen over many generations

Application
5.2.A1 Changes in beaks of finches on Daphne Major. (Oxford Biology Course Companion page 254)
Adaptive radiation describes the rapid evolutionary diversification of a single ancestral line. It occurs when members of a single species occupy a variety of distinct niches with different environmental conditions. Consequently, members evolve different morphological features (adaptations) in response to the different selection pressures
​​
Watch the short film on changes in beak size of the Galapagos finches
http://www.hhmi.org/biointeractive/origin-species-beak-finch

Do the evolution in action data analysis and graphing
http://www.hhmi.org/biointeractive/evolution-action-data-analysis from the HHMI

image from http://biologytb.net23.net
5.2.A2 Evolution of antibiotic resistance in bacteria.​ (Oxford Biology Course Companion page 257)
Antibiotics are chemicals produced by microbes that either kill (bactericidal) or inhibit the growth (bacteriostatic) of bacteria. Antibiotics are commonly used by man as a treatment for bacterial infections (not effective against viral infections). In a bacterial colony, over many generations, a small proportion of bacteria may develop antibiotic resistance via gene mutation.

PowerPoint presentation of Topic 5.2 by Chris Payne
Correct use of terminology is a key skill in Biology. It is essential to use key terms correctly when communicating your understanding, particularly in assessments. Use the quizlet flashcards or other tools such as learn, scatter, space race, speller and test to help you master the vocabulary.
Helpful Links:

Are humans still evolving by Darwin's natural selection? - BBC News 1 March 2011
Natural Selection Is Still With Us - Science, 30 April 2012
Insects Are Increasingly Evolving Resistance to Genetically Modified Crops - The Scientists 13 October 2017
How natural selection acted on one penguin species over the past quarter century - Science Daily 24 Sep 2016
TOK
Video Clips
​Click here for a video clip on Theory.
​Hank guides us through the process of natural selection, the key mechanism of evolution.
Paul Andersen describes pieces of evidence that Charles Darwin used to support the idea of evolution and his process of natural selection.  He begins with the following evidence use in the Origin of Species; artificial selection, biogeography, fossils and homologies.  He finishes with a discussion of DNA and how it can be used to unravel the evolution of life on our planet.
Twenty five cool adaptations
The Galápagos finches remain one of our world’s greatest examples of adaptive radiation. Watch as evolutionary biologists Rosemary and Peter Grant detail their 40-year project to painstakingly document the evolution of these famous finches. Their pioneering studies have revealed clues as to how 13 distinct finch species arose from a single ancestral population that migrated to the islands 2 million to 3 million years ago
The rock pocket mouse shows how different genetic changes can lead to the same adaptation — a coat color that hides the rock pocket mice from predators, such as owls. Explore a classic case study in natural selection and evolution with your science students.
Today Hank is here to tell us the specifics of why and how human population growth has happened over the past hundred and fifty years or so, and how those specifics relate to ecology. ​
Garrett Hardin interview on Overpopulation and Natural Selection.
Hank talks about the issues of rising global population.
Right now, you are inhabited by trillions of microorganisms. Many of these bacteria are harmless (or even helpful!), but there are a few strains of ‘super bacteria’ that are pretty nasty -- and they’re growing resistant to our antibiotics. Why is this happening? Kevin Wu details the evolution of this problem that presents a big challenge for the future of medicine.
Are we entering the post-antibiotic era? Antibiotic-resistant bacteria are on the rise, with millions of infections reported every year and thousands of deaths. How does antibiotic resistance work? How did we get here? And what can we do in the future to make sure that papercuts don't spell a death sentence
A brief description of staphylococcus aureus and MRSA
What is the Antibiotic Apocalypse? What is it all about? And how dangerous is it?
A young medical assistant is giving a nice presentation about the principles of evolution. The genetic information of each living being is subject to modifications. Mutations can lead to bacterial resistance towards antibiotics. When in contact with the antibiotic, the resistant bacteria will be the only ones to survive, multiply, spread all over and finishing up to be a big problem for medicine.
Antibiotic drugs save lives. But we simply use them too much — and often for non-lifesaving purposes, like treating the flu and even raising cheaper chickens. The result, says researcher Ramanan Laxminarayan, is that the drugs will stop working for everyone, as the bacteria they target grow more and more resistant. He calls on all of us (patients and doctors alike) to think of antibiotics — and their ongoing effectiveness — as a finite resource, and to think twice before we tap into it. It’s a sobering look at how global medical trends can strike home.
Reference sites