D.3: Function of the Liver 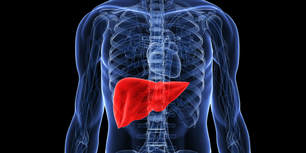 image from Huffington Post
In the Functions of the Liver unit we will learn the structure and function of the liver. We will also investigate problems that may occur with the liver.

​This unit will last 3 school days
​Essential idea:
​Nature of science:
Understandings:
D.3 U 1 ​The liver removes toxins from the blood and detoxifies them.  (Oxford Biology Course Companion page 684)
The liver acts as the main biochemical synthesizer and detoxifying organ. It's responsible for cleaning toxins and wastes from the blood, and separating out the useful nutrients to synthesize hundreds of biochemicals that the body needs for daily functioning. 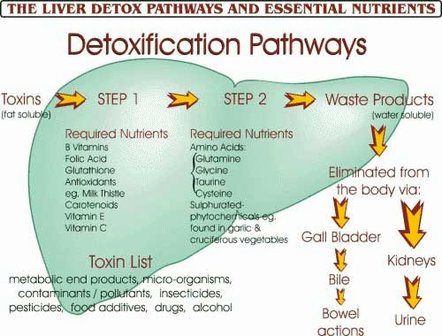 D.3 U 2 ​Components of red blood cells are recycled by the liver. (Oxford Biology Course Companion page 680)​
The typical lifespan of an erythrocyte (RBC) in an adult is about 120 days.   Old and damaged RBC’s undergo
changes in plasma membrane which makes them susceptible to recognition by macrophages. RBC’s are removed form circulation and broken down in the spleen and liver. Liver breakdowns erythrocytes and hemoglobin and most products are recycled.. 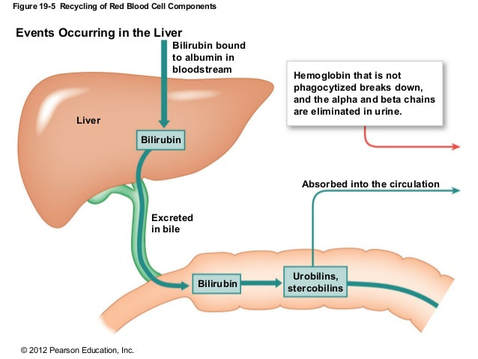 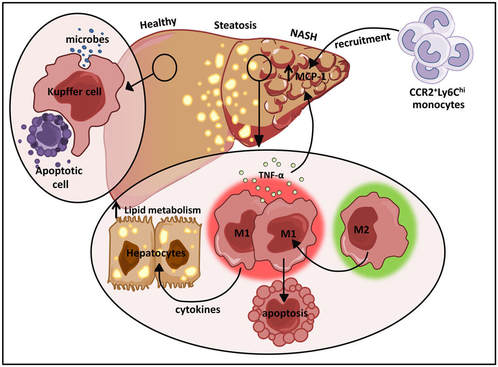 image from Frontiers
D.3 U 4 ​Iron is carried to the bone marrow to produce hemoglobin in new red blood cells. (Oxford Biology Course Companion page 680)​
Hemoglobin is synthesized in red blood cells, and iron is added to the heme group.  Iron is essential for red blood cell function as it is a component of the hemoglobin molecule but it is toxic at high concentrations. The released iron must be complexed within a protein in order to avoid oxidation to a ferric state. Iron can be stored by the liver within a protein shell of ferritin. Iron can be transported to the bone marrow (where new haemoglobin is produced) within the protein transferrin

image from microbiotics.com.ng
D.3 U 5 ​Surplus cholesterol is converted to bile salts (Oxford Biology Course Companion page 682).
​The liver is central to the regulation of cholesterol levels in the body. Not only does it synthesize cholesterol for export to other cells, but it also removes cholesterol from the body by converting it to bile salts and putting it into the bile where it can be eliminated in the feces. Furthermore, the liver synthesizes the various lipoproteins involved in transporting cholesterol and other lipids throughout the body. Cholesterol synthesis in the liver is under negative feedback regulation 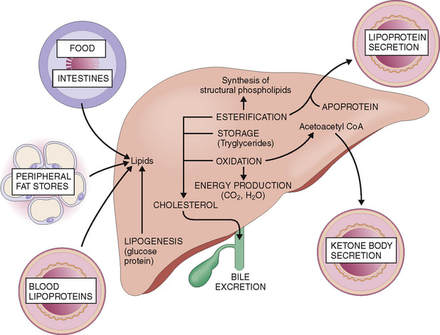 image from Basicmedical Key
D.3 U 6 ​Endoplasmic reticulum and Golgi apparatus in hepatocytes produce plasma proteins. (Oxford Biology Course Companion page 683).​
The rough ER of hepatocytes produce 90% of the proteins in blood plasma, including fibrinogen and albumin. Albumin is a carrier protein that binds to bilirubin and helps maintain osmotic balance in the blood. Fibrogen is essential for clotting.. Hepatocytes cells show extensive networks of ER and Golgi body which provides evidence of high levels of protein synthesis. Estimated that 13 million ribosomes attached to ER of a liver cell. ​ 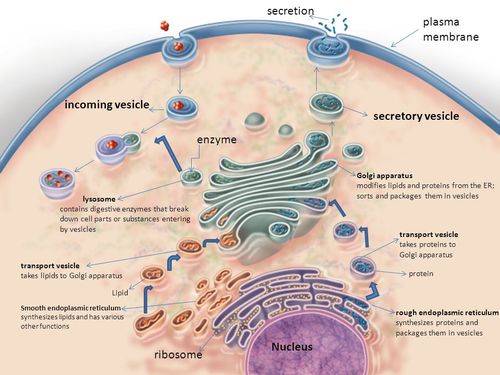 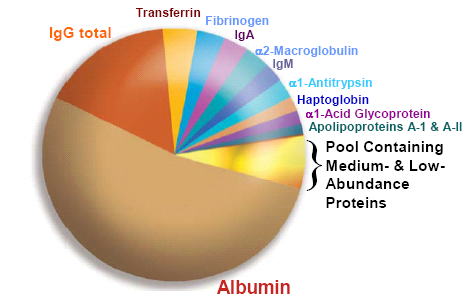 image from Biochemistry Den
D.3 U 7 ​The liver intercepts blood from the gut to regulate nutrient levels (Oxford Biology Course Companion page 679)
One main function of liver is to regulate quantity of nutrients circulating in the blood. Key role
in glucose, it can store glucose as glycogen or break down glycogen to glucose. 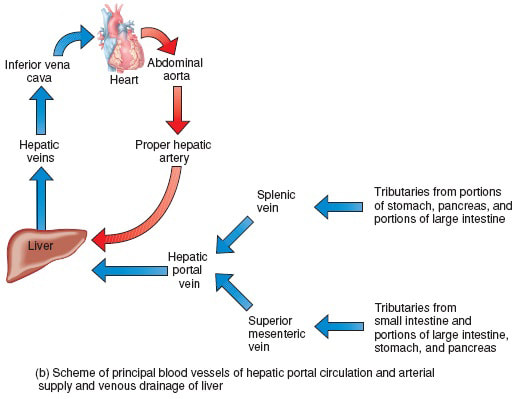 image from Wiley
Blood Sugar Regulation Animation
D.3 U 8 ​Some nutrients in excess can be stored in the liver. (Oxford Biology Course Companion page 679).​
If glucose level is high, insulin is released and stimulates hepatocytes to take up glucose and store it as glycogen. When levels fall, hormones such as glucagen is released and result is breakdown of glycogen, glycerol, amino acids and fatty acids in liver releasing glucose to the blood stream.

​Nutrients stored in the liver

image from Biology Notes
Application
D.3 A 1 ​Causes and consequences of jaundice. (Oxford Biology Course Companion page 681​
Old red blood cells travel to the liver, where they’re broken down. Bilirubin is the yellow pigment formed by the breakdown of these old cells. Jaundice occurs when your liver doesn’t metabolize bilirubin the way it’s supposed to. The liver might be damaged and unable to perform this process. Sometimes, the bilirubin simply can’t make it to the digestive tract, where it normally would be removed through the stool. In other cases, there may be too much bilirubin trying to enter the liver at once, or too many red blood cells dying at one time. Yellow-tinted skin and eyes characterize jaundice. In more severe cases, the whites of your eyes may turn brown or orange colored. 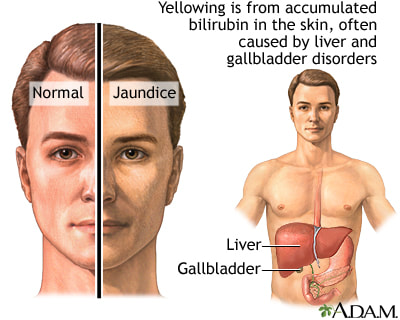 Sinusoidal are a special type of fenestrated capillaries that have larger openings (30-40 μm in diameter) in the endothelium. These types of blood vessels allow red and white blood cells and various serum proteins to pass. Sinusoid blood vessels are primarily located in the bone marrow, lymph nodes, and adrenal gland. Some sinusoids are special, in that they do not have the tight junctions between cells. They are called discontinuous sinusoidal capillaries, and are present in the liver and spleen where greater movement of cells and materials is necessary. 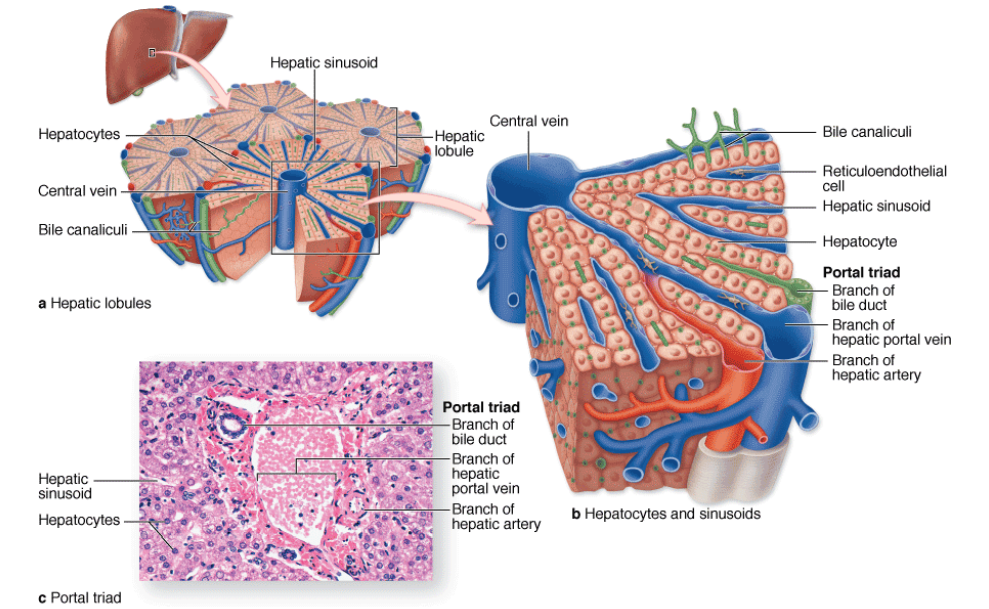 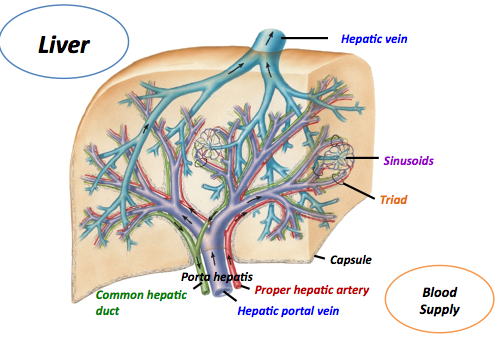 Topic D.3 Review
​​​​Correct use of terminology is a key skill in Biology. It is essential to use key terms correctly when communicating your understanding, particularly in assessments. Use the quizlet flashcards or other tools such as learn, scatter, space race, speller and test to help you master the vocabulary.
Useful Links

Secretion of bile and the role of bile acids
3D liver animation and brief outline of its functions from HealthLine.
Introduction to liver functions from Encyclopedia Britannica
Flashy introduction, then focuses on liver cancer from the CancerCompass.com
Tutorial with simple animation of bile secretion from Colorado State
EM images from Dr. Jastrow’s EM Atlas
Histology set of specialized cells of the GI system from Siumed

The Liver: A ‘Blob’ That Runs the Body - New York Times, Jun 2017
Scientists develop lab-based system to study mechanisms of common liver disease - News Medical, May 2018
TOK
​Video Clips
​Liver anatomy and function
There’s a factory inside you that weighs about 1.4 kilograms and runs for 24 hours a day. It’s your liver: the heaviest organ in your body, which simultaneously acts as a storehouse, a manufacturing hub, and a processing plant. Emma Bryce gives a crash course on the liver and how it helps keep us alive.
The liver is the largest organ in the body.  Liver tissue is composed of a compact mass of multisided units, known as the hepatic lobules
What is cirrhosis? Cirrhosis describes the process of irreversible scarring and fibrosis of the liver tissue.
Learn why jaundiced babies have yellowish skin and eyes for the first few days after they're born and how the ancient Greeks thought birds could help cure the affliction
Reference sites