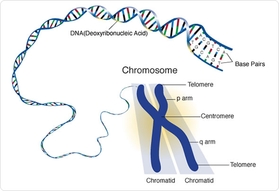 In the Genes unit students learn the structure of the chromosome and identify the consequences of a base substitution mutation.

Genetics is the storage of information and how this information can be passed from parents to progeny.
Genes are make up of DNA, few DNA molecules in a cell (just 46) but there are 1,000’s of genes. From this we know that each gene consists of a much shorter length of DNA than a chromosome and that each chromosome carries many genes. 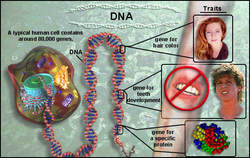 Genes are linked in groups, the groups each corresponds to one of the types of chromosome in a species

​DNA is packaged and organised into discrete structures called chromosomes . A gene is a sequence of DNA that encodes for a specific trait (traits may also be influenced by multiple genes)
The position of a gene on a particular chromosome is called the locus (plural = loci)

For example, the gene for eye colour has alleles that encode different shades / pigments

Different heritable factors = these pairs of heritable factors are alternative forms of the same gene – etc. Heigh, one gene making the plant tall and the other making it small. This is called allele. There can be more than just two alleles of a gene 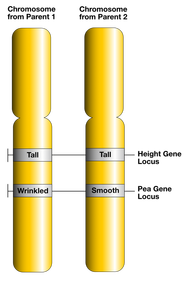 image fromcommons.wikimedia.org
3.1.U4 Alleles differ from each other by one or only a few bases.
Alleles are alternative forms of a gene that code for the different variations of a specific trait

​3.1 U5 New alleles are formed by mutation.
A gene mutation involves a change in the nucleotide sequence of DNA and is the ultimate source of genetic diversity. New alleles are created by random changes in the base sequence called mutations.


​Gene mutations can be beneficial, detrimental or neutral

3.1.A2 Comparison of the number of genes in humans with other species. 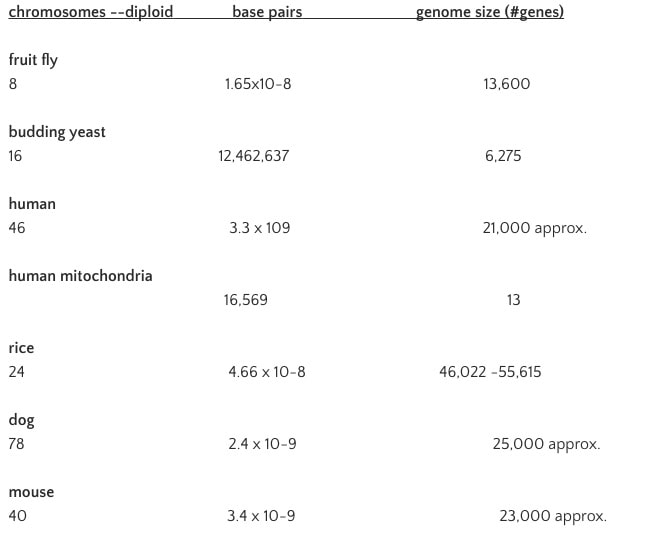 from http://www.edinformatics.com/math_science/human_genome.htm
Skills:
3.1.S1 Use of a database to determine differences in the base sequence of a gene in two species
Gene sequences from different species can be identified and then compared using two online resources:
BioInformation Basics
Key Words:
Class Assignment:

Topic 3.1 Reviewtopic_3.1_genes.docx
Powerpoint and Notes on Topic 3.1 from Chris Payne
​​​​​​​​Correct use of terminology is a key skill in Biology. It is essential to use key terms correctly when communicating your understanding, particularly in assessments. Use the quizlet flashcards or other tools such as learn, scatter, space race, speller and test to help you master the vocabulary.
External Links:
Let’s start with a tour of the basics from Learn.Genetics at Utah.
DNA  Coiling To Form Chromosomes
Chromosome Description
Video Tour of Basic Genetics
Click here for additional information on HOW GENES WORK.
Click here for some more information on Sickle Cell
DNA coiling on histone proteins from biostudio.com
A description of chromosomes from Dexter Pratt
Zooming in to Chromosome 11 (a bit too advanced) from the DNA Learning Centre’s Gene Almanac
Transcription Java game from thinkquest.org
How do mutations occur? from the DNAi at the Dolan DNA Learning Centre

​International-mindedness:
TOK:
​Video Clips:
We hear about DNA and genes all the time in the news and in our biology classes but very few of us can actually explain what a gene is? This short film is designed to help
When life emerged on Earth about 4 billion years ago, the earliest microbes had a set of basic genes that succeeded in keeping them alive. In the age of humans and other large organisms, there are a lot more genes to go around. Where did all of those new genes come from? Carl Zimmer examines the mutation and multiplication of genes.
​Epigenetic inheritance is really weird, but is it real?
​Animated and narrated segments presenting all the essential steps in sequencing a genome. From the NHGRI's Online Education Kit: Understanding the Human Genome Project.
​In 1990, The Human Genome Project proposed to sequence the entire human genome over 15 years with $3 billion of public funds. Then, seven years before its scheduled completion, a private company called Celera announced that they could accomplish the same goal in just three years at a fraction of the cost. Tien Nguyen details the history of this race to sequence the human genome
​Your genome, every human's genome, consists of a unique DNA sequence of A's, T's, C's and G's that tell your cells how to operate. Thanks to technological advances, scientists are now able to know the sequence of letters that makes up an individual genome relatively quickly and inexpensively. Mark J. Kiel takes an in-depth look at the science behind the sequence.
​Sickle Cell Anemia. Written by Paulo César Naoum and Alia F. M. Naoum
Evolution of Sickle Cell: Resistance to Malaria
Epigenetics: A new frontier in heredity
Reference sites