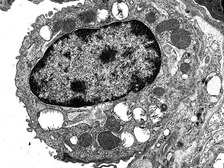 image from sites.sinauer.com
In Ultra-Structure of Cells students learn that all living things are made of cells, and cells are the smallest units that can be alive. Life on Earth is classified into five kingdoms, and they each have their own characteristic kind of cell. However the biggest division is between the cells of the prokaryote kingdom (the bacteria) and those of the other four kingdoms (animals, plants, fungi and protoctista), which are all eukaryotic cells. Prokaryotic cells are smaller and simpler than eukaryotic cells, and do not have a nucleus.

The close detail of a cell, with all organelles visible, that can be seen by using an electron microscope is refered to as the ultra-structure.

The unit is planned to  take 3 school days.
Essential Ideas
Nature of Science
Understanding:
​1.2.U.1 Prokaryotes have a simple cell structure without compartmentalisation
​Prokaryotes are organisms whose cells lack a nucleus  ('pro' = before ; 'karyon' = nucleus)

They belong to the kingdom Monera and have been further classified into two distinct domains: 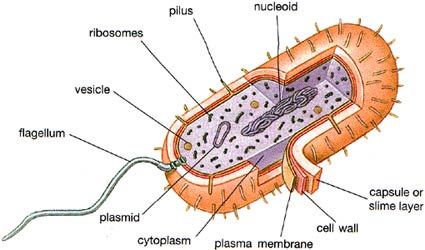 They have a more complex structure and are believed to have evolved from prokaryotic cells (via endosymbiosis)
Prokaryotic cells are fundamentally different in their internal organization from eukaryotic cells. Notably, prokaryotic cells lack a nucleus and membranous organelles.The nucleus is bounded by the nuclear envelope, a double membrane with many nuclear pores through which material enters and leaves.

Eukaryotes can be divided into four distinct kingdoms: 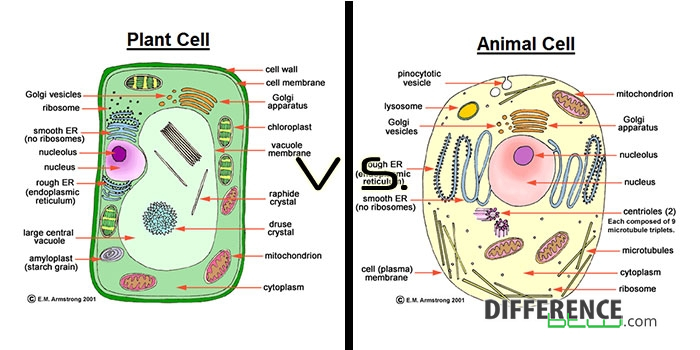 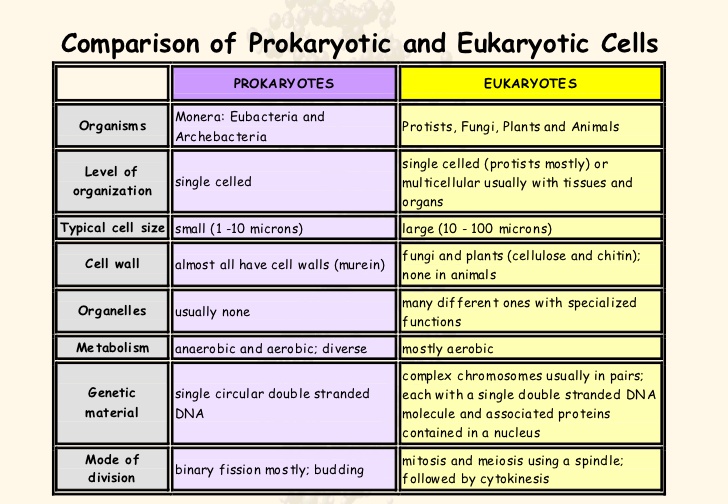 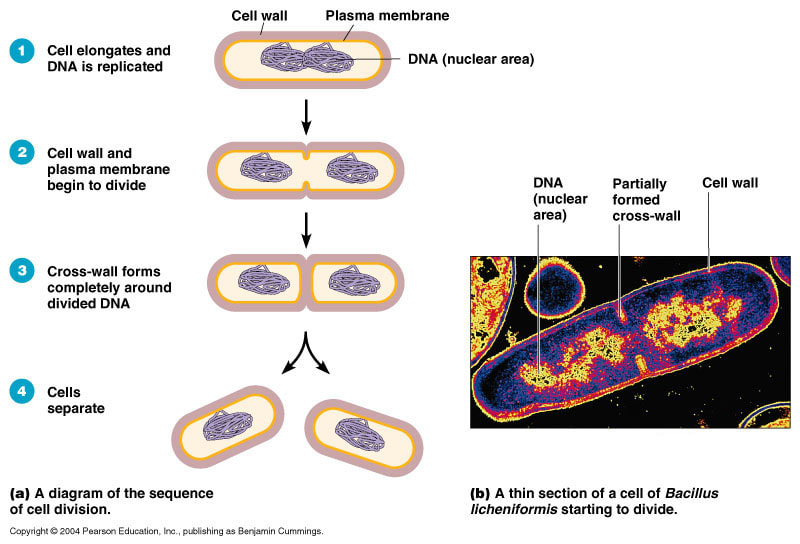 ​1.2.U.4 Electron microscopes have a much higher resolution than light microscopes 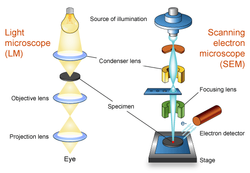 ​The electron microscope is a type of microscope that uses a beam of electrons to create an image of the specimen. It is capable of much higher magnifications and has a greater resolving power than a light microscope, allowing it to see much smaller objects in finer detail. They are large, expensive pieces of equipment, generally standing alone in a small, specially designed room and requiring trained personnel to operate them. 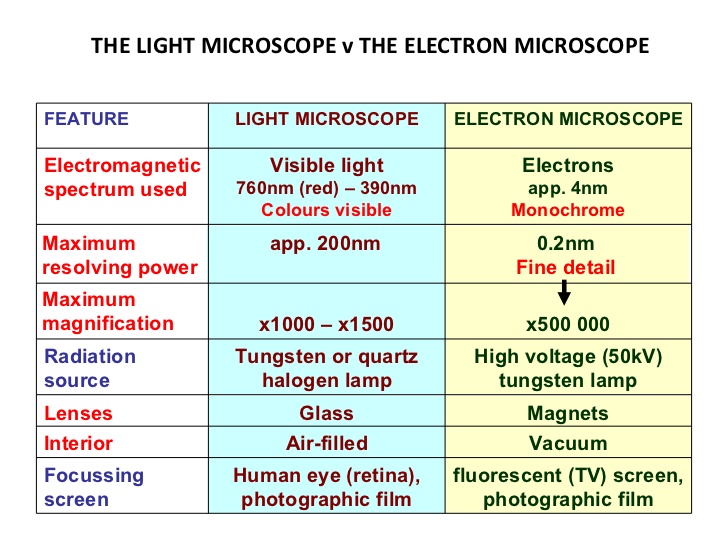 Palisade Mesophyll cells carry out most of the photosynthesis in the leaf.

Nucleus - a membrane bound structure that contains the cell's hereditary (DNA) information and controls the cell's growth and reproduction. It is commonly the most prominent organelle in the cell.

Mitochondria - as the cell's power producers, mitochondria convert energy into forms that are usable by the cell. They are the sites of cellular respiration which ultimately generates fuel for the cell's activities. Mitochondria are also involved in other cell processes such as cell division and growth, as well as cell death.

Golgi complex - also called the Golgi apparatus, this structure is responsible for manufacturing, warehousing, and shipping certain cellular products, particularly those from the endoplasmic reticulum (ER).

Peroxisomes - Like lysosomes, peroxisomes are bound by a membrane and contain enzymes. Peroxisomes help to detoxify alcohol, form bile acid, and break down fats.

Vacuole - these fluid-filled, enclosed structures are found most commonly in plant cells and fungi. Vacuoles are responsible for a wide variety of important functions in a cell including nutrient storage, detoxification, and waste exportation.

Centrioles - these cylindrical structures are found in animal cells, but not plant cells. Centrioles help to organize the assembly of microtubules during cell division.

Cilia and Flagella - cilia and flagella are protrusions from some cells that aid in cellular locomotion. They are formed from specialized groupings of microtubules called basal bodies

Chloroplast - this chlorophyll containing plastid is found in plant cells, but not animal cells. Chloroplasts absorb the sun's light energy for photosynthesis.

Cell Wall - this rigid outer wall is positioned next to the cell membrane in most plant cells. Not found in animal cells, the cell wall helps to provide support and protection for the cell.
​1.2.A.2 Prokaryotes divide by binary fission

image from http://biology.about.com/
​Binary fission is a form of asexual reproduction used by prokaryotic cells

In the process of binary fission:

Skills:
​1.2.S.1 Drawing of the ultrastructure of prokaryotic cells based on electron micrographs
.[Drawings of prokaryotic cells should show the cell wall, pili and flagella, and plasma membrane enclosing cytoplasm that contains 70S ribosomes and a nucleoid with naked DNA] 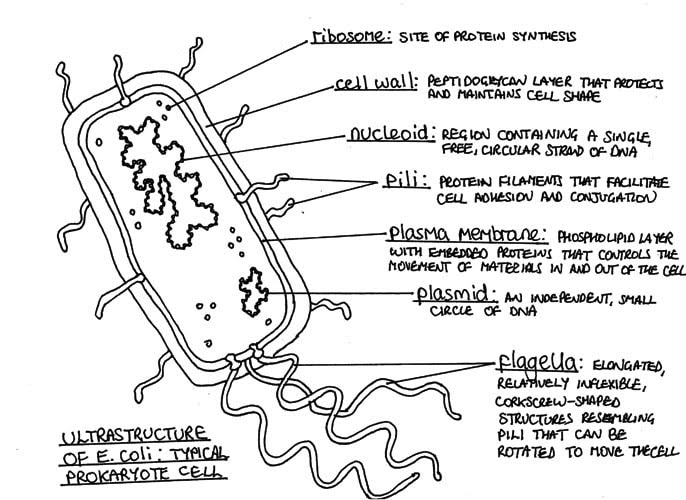 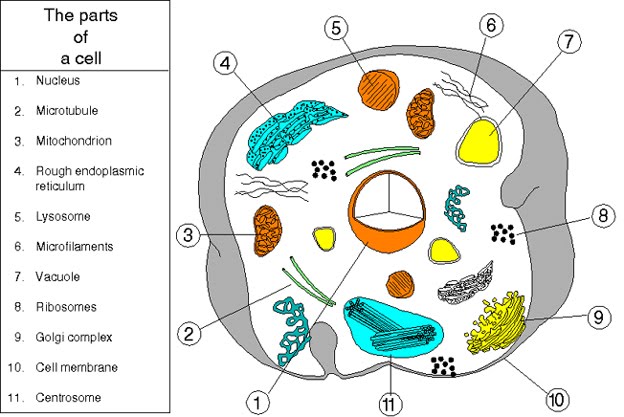 The diagram above shows a animal cell like a liver cell which contains many ribosomes, rough endoplasmic reticulum (rER), lysosomes, Golgi apparatus, many mitochondria and the nucleus.
​
Liver cells contain many mitochondria for energy and rough endoplasmic reticulum with ribosomes for secretion purposes.
Lysosomes Animation
1.2.S.3 Interpretation of electron micrographs to identify organelles and deduce the function of specialised cells
A micrograph is a photo or digital image taken through a microscope to show a magnified image of a specimen. While organelles have identifying structures, specific shapes may vary depending on the location of cross-sections

Positioning:  Center drawing on the page.  Do not draw in a corner.  This will leave plenty of room for the addition of labels.

Size:  Make a large, clear drawing; it should occupy at least half a page.

Labels:  Use a ruler to draw straight, horizontal lines to the right of the side of the drawing.  The labels should form a vertical list.  All labels should be printed (not cursive).

Accuracy:  Draw what is seen; not what should be there.  Avoid making “idealized”drawings.  Do not necessarily draw everything that is seen in the field of view.  Draw only what is asked for.  Show only as much as necessary for an understanding of the structure – a small section shown in detail will often suffice.  It is time consuming and unnecessary, for example, to reproduce accurately the entire contents of a microscopic field. When drawing low power plans do not draw individual cells. Show only the distribution of tissues.  When making high power drawings, draw only a few representative cells; indicate thickness of walls, membranes, etc.

Technique:  Keep looking back at your specimen whilst you are drawing.   If using a microscope, while observing increase the magnification to observe more details and reduce the magnification to get a more general view. Use the focusing controls on the microscope to observe at different depths of the specimen.  Move the specimen around; do not just concentrate on one part. Observe the general appearance first.

Title:  The title should state what has been drawn and what lens power it was drawn under (for example, phrased as:  drawn as seen through 400X magnification).  Title is informative, centered, and larger than other text. The title should always include the scientific name (which is italicized or underlined).

Scale:  Include how many times larger the drawing is compared to life size and a scale line that indicates relative size.  To determine magnification, use the equation: ​ 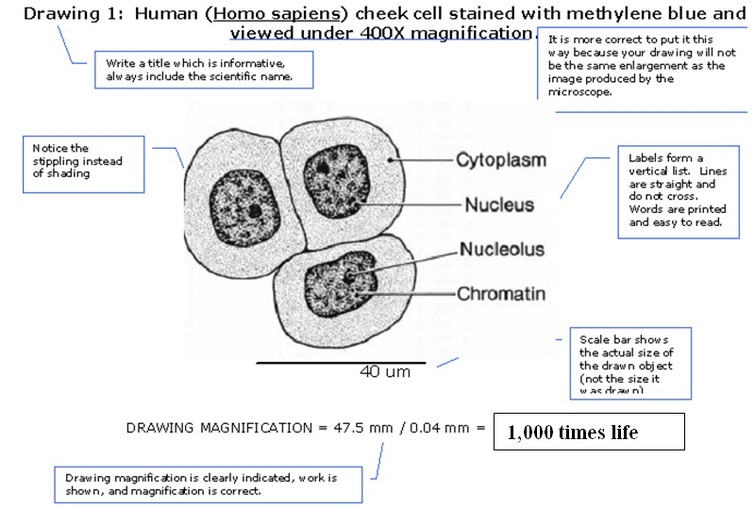 How to draw an IB E. coli. and liver cell. Ignore the old numbers
For additional information, see the Drawing Skills Handbook or Steps to Success.
Key Terms:
Class Materials:

​Topic 1.2 Kahoot Review Quiz
​
PowerPoint on Topic 1.2 by Chris Paine
​Correct use of terminology is a key skill in Biology. It is essential to use key terms correctly when communicating your understanding, particularly in assessments. Use the quizlet flashcards or other tools such as learn, scatter, space race, speller and test to help you master the vocabulary.
Helpful Links:

Cell Tutorial
Check out this great tutorial at Wiley Science tutorial (Flash)
Click here and insert the express code 4273P and click on Weblink 2.1
The Biology Project
Cells Alive
BioCoach Cell Structure and Function topic
Wiley Science tutorial (Flash)
Bacterial growth populations from umich.edu
Virtual Scanning Electron Microscope
How to Use the Microscope
Biology Corner
Some really nice pictures and videos of microscopic organisms can be found here on Dr. Ralf
Wagner’s website, including Amoeba, waterfleas, Eugelena, and more.
The Evolution of Organelles
Comparison of Prokaryote, Animal and Plant Cells
Cell Tutorial
Flagella and Cilia
A Typical Cell
Identifying Eukaryotic Animal Cell Organelles
How Vesicles Transport Cargo
Endomembrane System
The Endomembrane System in Eukaryotic Cells
The Nucleus and Endomembrane System
Pathways, Releasing the Protein
Don’t forget the great resources at Learn.Genetics.
Learn about pathogens in a fun way by reading their microbe passports - a great resource from Microbiology Online
Learn about the inside story of cell communication by learn.genetics

​News:
​
Cell evolution puzzle, By Dr David Whitehouse, BBC News Online science editor
Here’s a story of a giant bacterium, from NotExactlyRocketScience
Yeast Gets by on Almost No Oxygen
International Mindedness
Micrographia by Robert Hooke is one of the earliest works about cells. It is kindly published by the US National Library of Medicine
TOK
Video Clips:
​Hank Green tells you about plant and animal cells.
Mary Poffenroth, an adjunct professor of biology, teaches you different topics of biology. In this video she explains the difference between prokaryotic and eukaryotic cells.
Mahalo biology expert Mary Poffenroth tells you what you need to know about the cell nucleus.
Why Are You Multicellular
Michael Pritchard’s LifeSaver bottle is a solution to clean water needs. For just $150, it can filter even the dirtiest water, in remote areas, or following disasters such as the Haiti quakes. Spurred on by the problems following the Asian tsunami and Hurricane Katrina, see Pritchard demonstrate the technology at TED 2009:
Reference sites