In the Cell Membrane unit you will learn about cell size and the  structure and function of cell membranes.  Cell membranes protect and organize cells. All cells have an outer plasma membrane that regulates not only what enters the cell, but also how much of any given substance comes in.

Like all other cellular membranes, the plasma membrane consists of both lipids and proteins. The fundamental structure of the membrane is the phospholipid bilayer, which forms a stable barrier between the compartments inside and outside of the cell. Proteins embedded within the phospholipid bilayer carry out the specific functions of the plasma membrane, including selective transport of molecules and cell-cell recognition.

The unit is planned to take 2 school days
Essential Ideas:
Nature of Science
Understandings
​1.3.U.1 Phospholipids form bilayers in water due to the amphipathic properties of phospholipid molecules. (Oxford Biology Course Companion page 26). [Amphipathic phospholipids have hydrophilic and hydrophobic properties.]​ 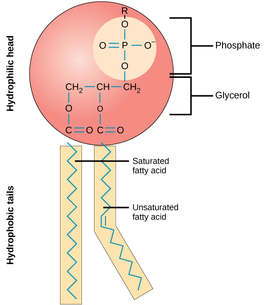 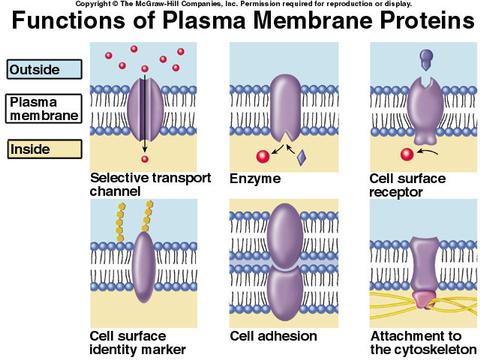 1.3.U.3 Cholesterol is a component of animal cell membranes. (Oxford Biology Course Companion page 32)​
Cholesterol is able to stop the hydrocarbon from crystalizing and behaving as a solid, but the cholesterol also retricts molecular motion, which reduces the fluidity of the membrane. Also reduces the permiability to the hydrophilic particles like sodium ions and hydrogen ions

It is absent in plant cells, as these plasma membranes are surrounded and supported by a rigid cell wall made of cellulose
Most of the cholesterol molecule is hydrophobic and therefore embeds within the tails of the bilayer. A small portion (hydroxyl –OH group) is hydrophilic and is attracted to the phospholipid head. 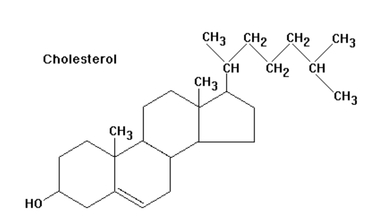 Membrane Animation
Applications:
1.3.A.1 Cholesterol in mammalian membranes reduces membrane fluidity and permeability to some solutes. (Oxford Biology Course Companion page 33).​
Cholesterol embedded in the membrane will reduce the fluidity making the membrane more stable by the hydrophilic interactions with the phospholipid heads. Cholesterol adds firmness and integrity to the plasma membrane and prevents it from becoming overly fluid, it also helps maintain its fluidity by disrupting the regular packing of the hydrocarbon tails.
At the high concentrations it is found in our cell's plasma membranes (close to 50 percent, molecule for molecule) cholesterol helps separate the phospholipids so that the fatty acid chains can't come together and crystallize.
Therefore, cholesterol helps prevent extremes-- whether too fluid, or too firm-- in the consistency of the cell membrane. 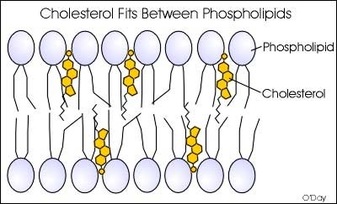 Skills:
​1.3.S.1 Drawing of the fluid mosaic model (Oxford Biology Course Companion page 31).
​ [Drawings of the fluid mosaic model of membrane structure can be two dimensional rather than three dimensional. Individual phospholipid molecules should be shown using the symbol of a circle with two parallel lines attached. A range of membrane proteins should be shown including glycoproteins.]​ 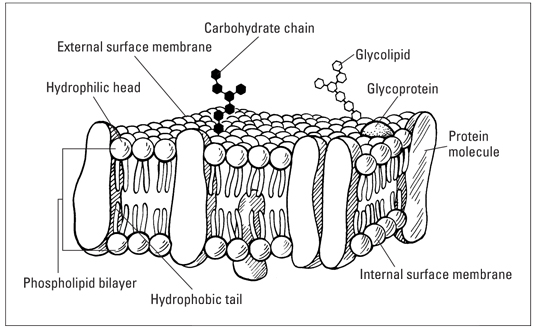 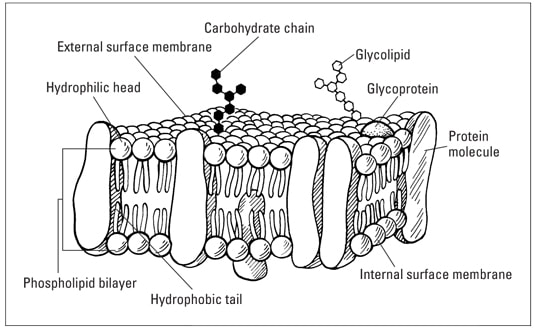 ​1.3.S.2 Analysis of evidence from electron microscopy that led to the proposal of the Davson-Danielli model. (Oxford Biology Course Companion page 28).​
The fluid-mosaic model was not the first scientifically accepted paradigm to describe membrane structure. The first model that attempted to describe the position of proteins within the bilayer was proposed by Hugh Davson and James Danielli in 1935. Davson and Danielli proposed that the lipid bilayer was coated on either side with a layer of globular proteins. The hydrophobic tails of the lipids are orientated towards each other, while the hydrophilic heads are oriented to the outside. Although the membrane composition is correct, there are some problems with the proposed model:

Membranes are not identical. The differ in thickness and the ratio of proteins:lipids.
​The model was described as a 'lipo-protein sandwich’, as the lipid layer was sandwiched between two protein layers
The dark segments seen under electron microscope were identified (wrongly) as representing the two protein layers 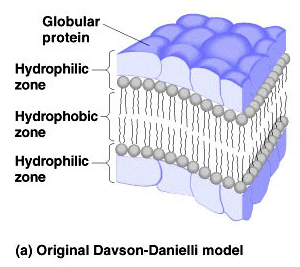 ​When viewed under a transmission electron microscope, membranes exhibit a characteristic 'trilaminar’ appearance

Trilaminar = 3 layers (two dark outer layers and a lighter inner region)
​1.3.S.3 Analysis of the falsification of the Davson-Danielli model that led to the Singer-Nicolson model. (Oxford Biology Course Companion page 29).​
​There were a number of problems with the lipo-protein sandwich model proposed by Davson and Danielli:

Topic 1.3 Kahoot Review Quiz
PowerPoint Presentation Topic 1.3 by Chris Paine
​Correct use of terminology is a key skill in Biology. It is essential to use key terms correctly when communicating your understanding, particularly in assessments. Use the quizlet flashcards or other tools such as learn, scatter, space race, speller and test to help you master the vocabulary.
Useful Links:

Membranes
Membrane Structure Tutorial
Structure of Cell Membrane
Construction of the Cell Membrane
Lipid Bilayer
Against the Gradient
How Vesicles Transport Cargo
Endomembrane System
The Endomembrane System in Eukaryotic Cells
The Nucleus and Endomembrane System
Pathways, Releasing the Protein
Check out the Phospholipid bilayer, from YellowTang
Check out the Membrane structures and formation, from Carnegie Mellon
Animated plasma membrane, by John Kyrk -EXCELLENT
For lots more animations on cell structure and function and cell transport, visit North Harris College.
Membranes lessons from HippoCampus Biology.
Example of cell-cell communication from Learn.Genetics
Click here and insert the express code 4273P and click on Weblink 2.3a and 2.3b
​
Membrane Fluidity

In the News:
​
Cellular Shipping BBC News Health
‘Bouncy’ cell membranes behave like cornstarch and water, from ScienceDaily
Membrane fusion discovered in 2002, from Brookhaven National Laboratory
TOK
Video Clips:
​Cell membranes are structures of contradictions. These oily films are hundreds of times thinner than a strand of spider silk, yet strong enough to protect the delicate contents of life: the cell’s watery cytoplasm, genetic material, organelles, and all the molecules it needs to survive.
The cell membrane, like a good jacket, protects the cell from everything outside of it. How is it simultaneously sturdy, flexible, and capable of allowing the right things to pass through? Ethan Perlstein rediscovers the scientists and their research that have changed the way we study the membrane and the cell as a whole.
Paul Andersen gives you a brief introduction to the cell membrane. He starts by describing amphipathic nature of a phospholipid and how it assembles into a membrane. He gives an overview of the fluid mosaic model inside cells. He also discusses the movement of material across a membrane and the role of proteins in movement and function.
Full version of inner life of the cell,
​Hank describes how cells regulate their contents and communicate with one another via mechanisms within the cell membrane.
​The Davson-Danielli model is an idea proposed on how cells regulate their environment. The proteins are on the outside of the bi-layer membrane. However, membranes need to allow for solute particles to pass back and forth. When proteins are on the outside, it blocks the solutes from passing through, preventing homeostasis. Therefore, we have to reject this model. In the Singer-Nicholson Fluid Mosaic Model, the integral proteins are embedded in the bi-layer. They have the ability to open up and let particles move back and forth.
Reference sites