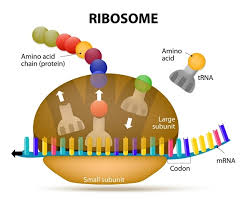 image from News Medical
In the Translation Unit we will extend our knowledge on Topic 2.7 DNA Replication, Transcription and Translation.

Translation is the second part of the central dogma of molecular biology, describing how the genetic code is used to make amino acid chains. This unit will explore the mechanics involved in polypeptide synthesis. You will learn the three major steps of translation as tRNA, mRNA, and ribosomes form the polypeptide. We will also explore the structural formation of polypeptides after translation

​This unit will last 3 school days
​Essential idea:
​Nature of science:
Understandings:
7.3 U 1 ​Initiation of translation involves assembly of the components that carry out the process. (Oxford Biology Course Companion page 364).​
The first stage of translation involves the assembly of the three components that carry out the process (mRNA, tRNA, ribosome)

image from The Lesson Locke
7.3 U 2 ​Synthesis of the polypeptide involves a repeated cycle of events. (Oxford Biology Course Companion page 365).​
Elongation
​
Translocation 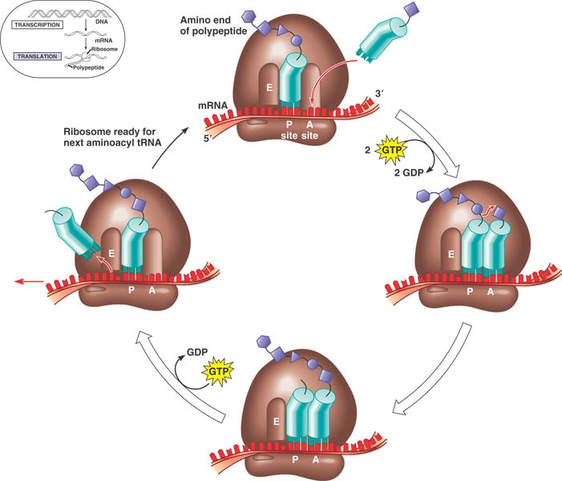 image from UTEP.edu
How Translation Works Animation
7.3 U 4 ​Free ribosomes synthesize proteins for use primarily within the cell.  (Oxford Biology Course Companion page 366).​
7.3 U 5 ​Bound ribosomes synthesize proteins primarily for secretion or for use in lysosomes. (Oxford Biology Course Companion page 366).​
Ribosomes attached to ER create proteins that are secreted from the cell by exocytosis or are used in lysosomes.
Proteins perform many functions within specific compartments of the cell or in other parts of the body after they are secreted out of the cell

Proteins that are destined to be used in lysosomes, ER, Golgi Apparatus, the plasma membrane or secreted by the cell are made by ribosomes bound by the endoplasmic reticulum. Ribosomes that become bound to the ER are directed here by a signal sequence that is part of that specific polypeptide. This signal sequence on the polypeptide binds to a signal recognition protein (SRP). The SRP guides the polypeptide and ribosome to the ER where it binds to an SRP receptor. Translation can now continue and the polypeptide is deposited into the lumen of the ER as its created for transportation to the correct location

7.3 U 6​ Translation can occur immediately after transcription in prokaryotes due to the absence of a nuclear membrane. (Oxford Biology Course Companion page 365).​
Since prokaryotic DNA is not compartmentalized into a nucleus, once transcription begins creating a strand of mRNA, translation can begin immediately as the mRNA strand is created. In eukaryotes, the completed mRNA has to be transported from the nucleus, through the nuclear pore to the ribosome on the ER or in the cytosol 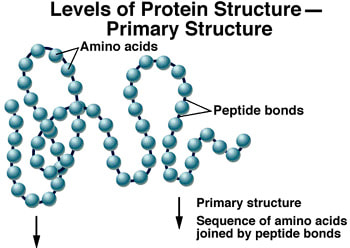 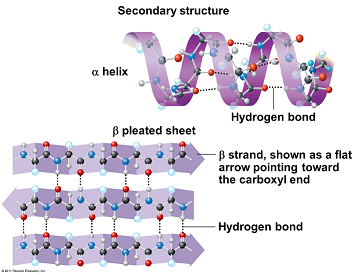 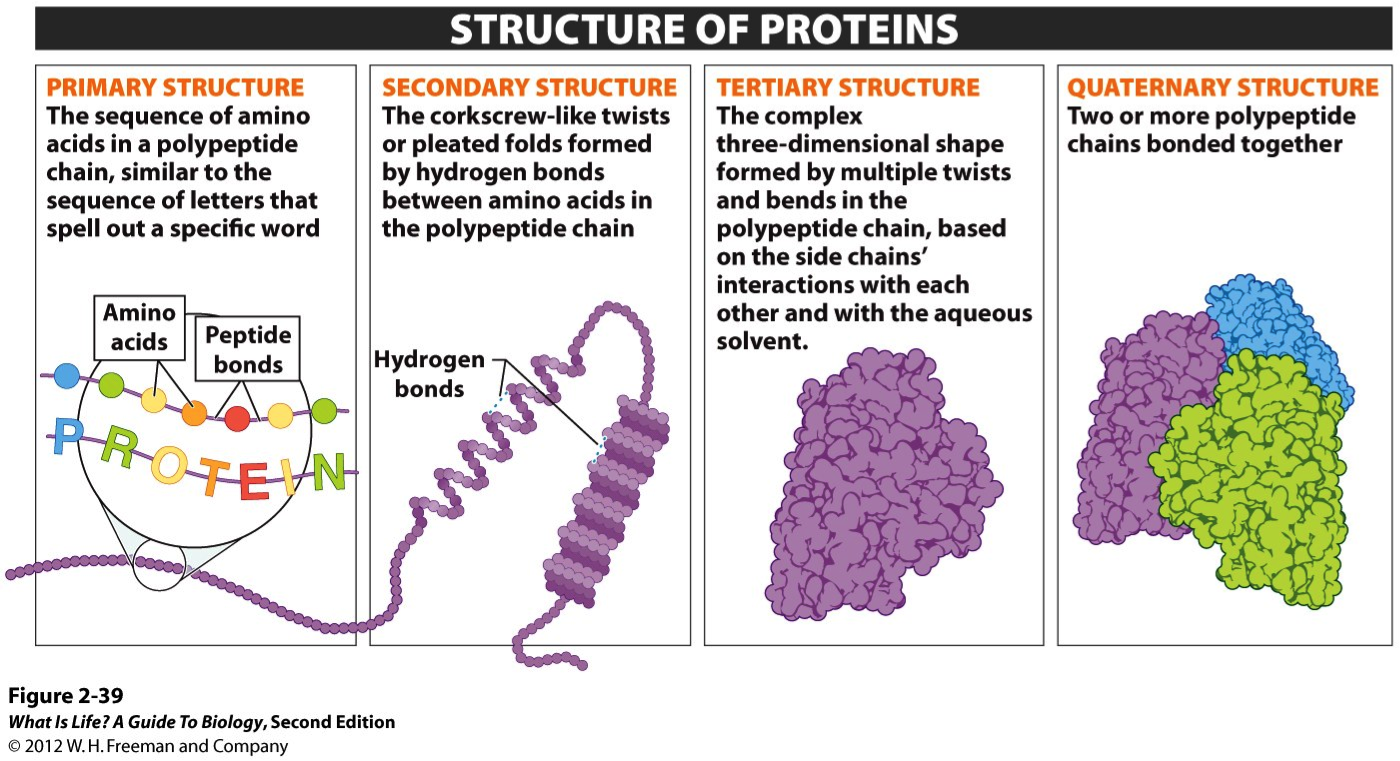 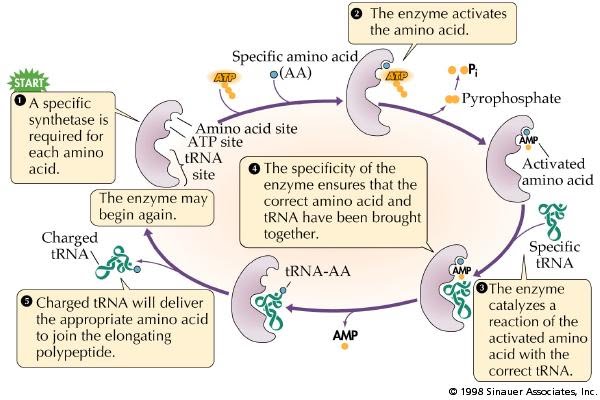 Skills
7.3.S1  The use of molecular visualization software to analyze the structure of eukaryotic ribosomes and tRNA molecules (Oxford Biology Course Companion page 362).
​
Ribosomes are organelles made from protein and RNA that catalyze the assembly of amino acids into polypeptides during translation. Ribosomes consist of two subunits; a large subunit and a small sub unit. The large sub-unit consists of 3 binding sites for tRNA molecules called the A site (The A site binds an aminoacyl-tRNA (tRNA bound to an amino acid); the P site binds a peptidyl-tRNA (tRNA bound to the peptide being synthesized); and the E site binds a free tRNA (no amino acid attached) before it exits the ribosome. The order of the sites in the ribosomes is E P A.

There is a binding site for the mRNA on the surface of the ribosome The small subunit of the ribosome contains the binding site for the mRNA strand. The space between the two subunits of the ribosome is where the polypeptide is assembled during translation.
​7.3 S 2  Identification of polysomes in electron micrographs of prokaryotes and eukaryotes. (Oxford Biology Course Companion page 366).​
Polysomes are several ribosomes used to translate an mRNA at the same time, forming what is called a polysome. More than one ribosome can translate an mRNA at one time, making it possible to produce many polypeptides simultaneously from a single mRNA.
​
In prokaryotes, several ribosomes can attach themselves to the growing mRNA chains to form a polysome while the mRNA chains are still attached to the DNA (left)
​
In eukaryotes, the mRNA detaches from the DNA and is then transported through pores in the nuclear envelope to the ribosomes in the cytoplasm. Once in the cytosol, eukaryote mRNA can also form polysomes (right)
Key Terms
Classroom Material

Topic 7.3 Review
​PowerPoint and Notes on Topic 7.3 by Chris Payne
​​​Correct use of terminology is a key skill in Biology. It is essential to use key terms correctly when communicating your understanding, particularly in assessments. Use the quizlet flashcards or other tools such as learn, scatter, space race, speller and test to help you master the vocabulary.
Useful Links

Protein 'intentionally' terminates own synthesis by destabilizing synthesis machinery -- the ribosome - ScienceDaily, Nov 2017
Unknown Protein Structures Predicted - The Scientists, Jan 2017
​
Video Clips
Transcription in eukaryotes Animation
Translation process for protein synthesis.
tRNA
​Everyone has heard of proteins. What are they on the molecular level? They're polymers of amino acids, of course. They make up most of your body, so we have to understand their structure very well! Check this out to learn the hierarchy of protein structure so that we can later learn all about what different types of proteins can do.
Reference sites