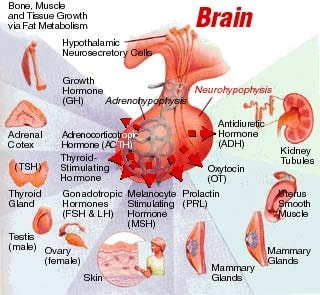 In the unit of Hormones, Homeostasis and Reproduction we will learn how the internal environment of the body must remain constant despite changes that occur in the external environment. Hormones are used in feedback mechanism to help control this environment. We will look at how these hormones can control blood glucose, our metabolic rate, our body temperature, our appetite and sleep cycles. We will also look at how hormones are used in reproduction.

​This unit will last 4 school days.
​Essential idea:
​Nature of science:
Understandings:
6.6.U1 Insulin and glucagon are secreted by β and α cells of the pancreas respectively to control blood glucose concentration.​(Oxford Biology Course Companion page 329)​
The body needs glucose to make ATP (via cell respiration), however the amount required will fluctuate according to demand. High levels of glucose in the blood can damage cells (creates hypertonicity) and hence glucose levels must be regulated 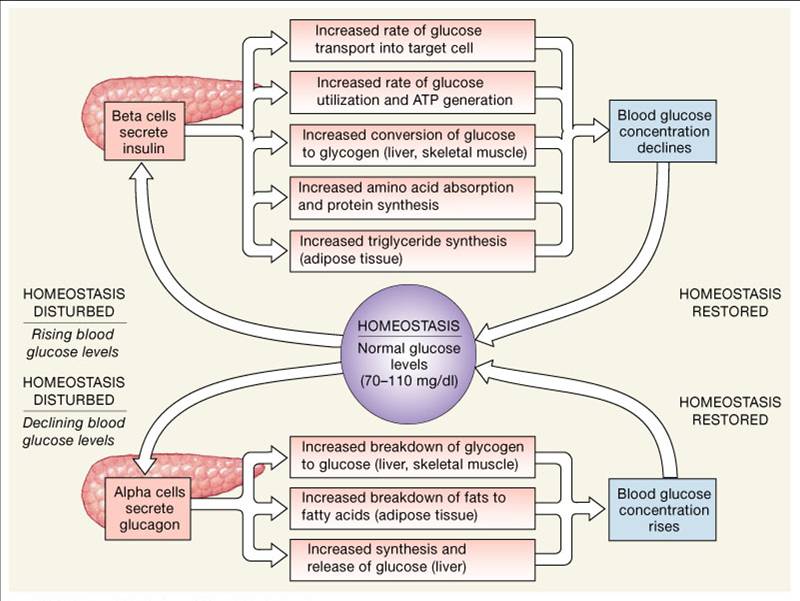 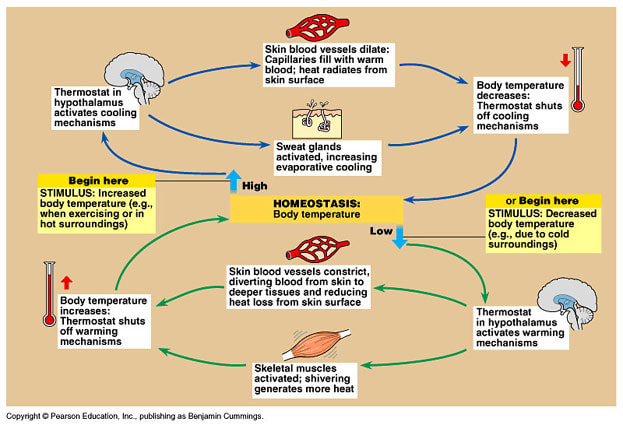 6.6.U3 Leptin is secreted by cells in adipose tissue and acts on the hypothalamus of the brain to inhibit appetite. (Oxford Biology Course Companion page 332).​
Leptin is a hormone made by adipose cells that helps to regulate energy balance by inhibiting hunger. Leptin acts on the receptors in the arcuate nucleus (collection of neurons) of the hypothalamus to regulate appetite in order to achieve energy homeostasis The concentration of leptin in the blood is controlled by food intake and the amount of adipose tissue in the body

If the amount of adipose tissue in an individual increases, then their concentrations of leptin also increases, leading to long term suppression of appetite and reduced food intake

​In obese individuals a decreased sensitivity to leptin can occur, resulting in an inability the recognize when they are full 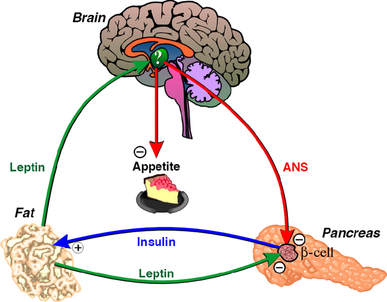 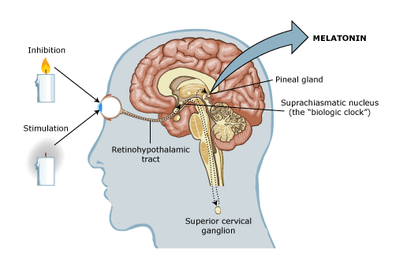 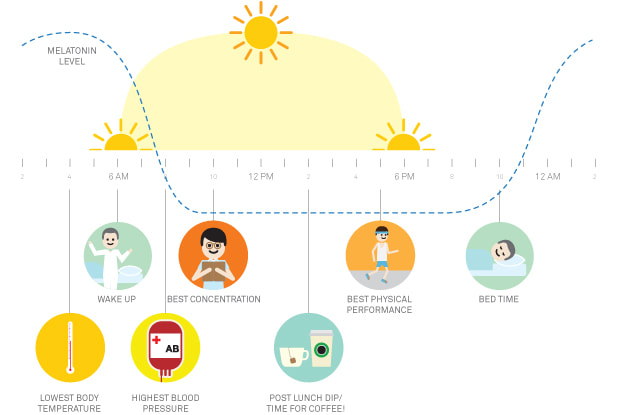 image from Fuzzy Science
6.6.U5 A gene on the Y chromosome causes embryonic gonads to develop as testes and secrete testosterone.​ (Oxford Biology Course Companion page 334).​
Humans have 46 chromosomes in all diploid somatic cells – 22 pairs are autosomes and the 23rd pair are the sex chromosomes.
6.6.U6 Testosterone causes pre-natal development of male genitalia and both sperm production and development of male secondary sexual characteristics during puberty.​  (Oxford Biology Course Companion page 334).​
​The main male reproductive hormone is testosterone, which is secreted by the testes and serves a number of roles: 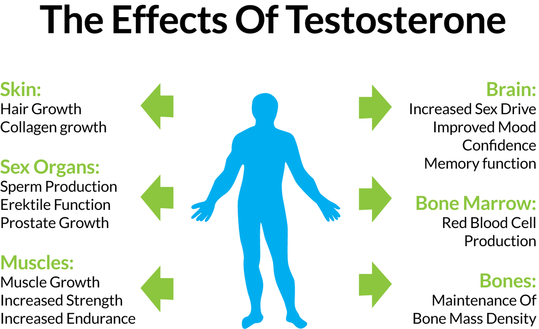 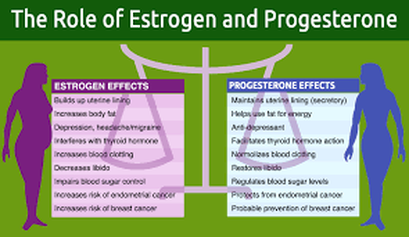 6.6.U8 The menstrual cycle is controlled by negative and positive feedback mechanisms involving ovarian and pituitary hormones​  [The roles of FSH, LH, estrogen and progesterone in the menstrual cycle are expected.]​ ​(Oxford Biology Course Companion page 336).
The menstrual cycle describes recurring changes that occur within the female reproductive system to make pregnancy possible 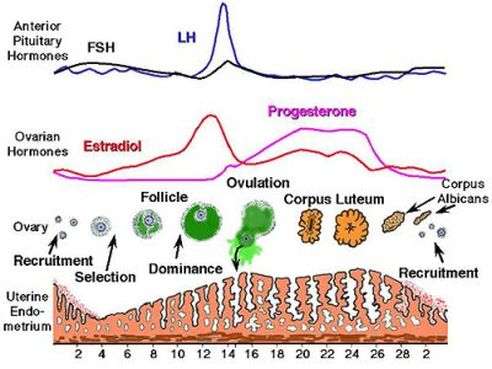 Application
6.6.A1 Causes and treatment of Type I and Type II diabetes.​ (Oxford Biology Course Companion page 330)​
Diabetes is having increased effect on human societies around the world, including personal suffering due to ill health and diabetes directly but also side effects such as kidney failure, eye problems, skin sores and infection. Table 1 distinguishes between type I and type II diabetes.
Blood Glucose Regulation Animation 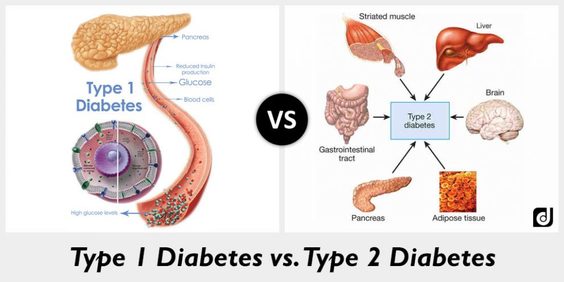 images from Difference Between
6.6.A2 Testing of leptin on patients with clinical obesity and reasons for the failure to control the disease. (Oxford Biology Course Companion page 332).​
The discovery of how mice become obese because of the lack of the hormone leptin and the subsequent treatment of the mice with leptin injections, led to human trials to decrease obesity. However, trials with humans have had mixed response since the physiology of humans is much different then mice.

Since most humans have quite a high leptin concentration, it was determined that the many of obesity cases where caused by a change in the receptor protein for leptin, not in the production of leptin. A double blind study was conducted by the biotech company Amgen, showed that injections of leptin to many of these individuals, since their receptors didn’t work, failed to control obesity. In individuals that experienced weight loss, there was a big discrepancy in the amount of weight that was lost. There also were other side effects such as skin irritation and swelling. 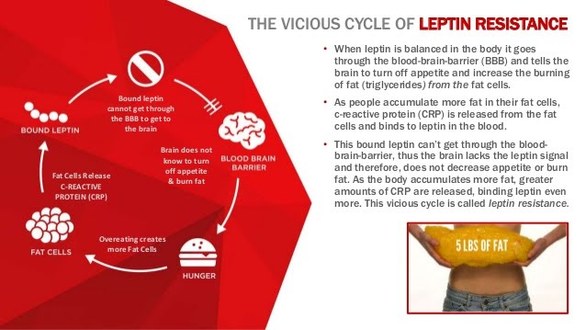 Leptin Feedback Mechanism
6.6.A3 ​Causes of jet lag and use of melatonin to alleviate it.(Oxford Biology Course Companion page 334).​
The SCN of the hypothalamus and the pineal gland continual set the circadian rhythm of the place the person is departing from. Therefore, when a person lands in a country that is many time zones different than the origin, they feel sleepy in the day and awake at night

​Jet lag will only last a few days, as the body adjusts to the new times when the light is detected by the cells in the retina during a different time period

6.6.A4 ​The use in IVF of drugs to suspend the normal secretion of hormones, followed by the use of artificial doses of hormones to induce superovulation and establish a pregnancy. (Oxford Biology Course Companion page 339).​
​ IVF is the process of fertilization by extracting eggs, retrieving a sperm sample, and then manually combining an egg and sperm in a laboratory dish. The embryo(s) is then transferred to the uterus​ 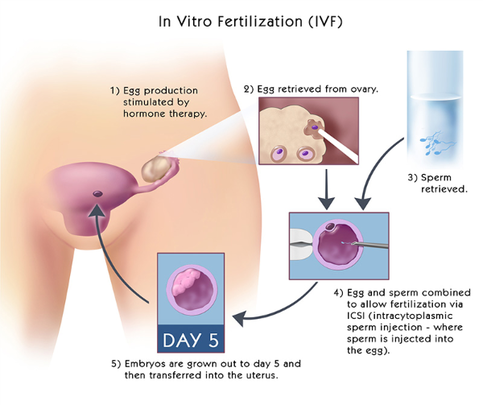 Aristotle’s theory was called the seed and soil theory, which stated that the male produces a seed (sperm) which then forms an egg when it mixes with menstrual blood of the mother. The egg then develops into a fetus inside the mother and eventually “voila” you have a baby

Harvey studied the uterus of the deer during mating season by killing them and then dissecting them expecting to find eggs; however, Harvey only found signs of fetal development 2 to 3 months after mating season. He concluded that Aristotle’s theory of seed and soil was incorrect, but then he was also incorrect in stating that the fetus doesn’t come from the mixture of the male and female seeds. He knew he had not come up with the correct method of sexual reproduction
William Harvey
Skill
6.6.S1  Annotate diagrams of the male and female reproductive system to show names of structures and their functions. (Oxford Biology Course Companion page 335).​
Key Terms:
Class Materials:
Hormones
Hormones and Homeostasis unit notes packet
Endocrine system and hormone action notes

​Topic 6.6 Review
​​​Correct use of terminology is a key skill in Biology. It is essential to use key terms correctly when communicating your understanding, particularly in assessments. Use the quizlet flashcards or other tools such as learn, scatter, space race, speller and test to help you master the vocabulary.

And some BioEthics cases on IVF:

Australasian bioethics special: IVF
Vatican condemns IVF
Journal of Medical Ethics: State of the Debate
Octomom signs reality TV deal
The seedy side of sperm-banks – low regulation leads to one father with 150 kids.
- Cause of pre-eclampsia discovered (link to enzymes and inhibition), from The Guardian
- A cartoon post on how the pill works, from Beatrice the Biologist.
- How the inventor of the pill changed the world for women, from the Guardian.
- Putting numbers into context, regarding success rates of IUDs, from BadScience.
- Great 3D Pregnancy calendar and loads of resources on being and getting pregnant, from ParentsConnect
- And another one from BabyCentre.com.

In the News:
​
New Controversy Over Experimental IVF Method
(2013-09-17)Insect gene expression responds to diet from BrightSurf
Mystery kidney illness kills thousands in South America, from AP.
12 Myths about Diabetes and Insulin
​New Controversy Over Experimental IVF Method
(2013-09-17)
Video Clips:
​Explore homeostasis with the Amoeba Sisters and learn how homeostasis relates to feedback in the human body. This video gives examples of negative feedback (temperature and blood glucose regulation) and positive feedback (events in childbirth).
​Hank fills us in on the endocrine system - the system of glands which produce and secrete different types of hormones directly into the bloodstream to regulate the body's growth, metabolism, and sexual development & function.
​Hank begins teaching you about your endocrine system by explaining how it uses glands to produce hormones. These hormones are either amino-acid based and water soluble, or steroidal and lipid-soluble, and may target many types of cells or just turn on specific ones
In the second half of our look at the endocrine system, Hank discusses chemical homeostasis and hormone cascades. Specifically, he looks at the hypothalamus-pituitary-thyroid axis, or HPT axis, and all the ways your body can suffer when that system, or your hormones in general, get out of whack.
Emma Bryce explains how the thyroid, like the operations manager in a company, is tasked with making sure that all the cells in your body are working properly.
Beneath your ribs, you’ll find, among other things, the pancreas -- an organ that works a lot like a personal health coach. Emma Bryce explains how this organ controls your sugar levels and produces a special juice that releases the nutrients from your food to help keep you in the best possible shape.
Diabetes has a history dating back to Ancient Greece. Our treatment of it, however, is more recent and was originally made possible with the help of man's best friend. Due to physiological traits shared with humans, dogs have saved countless lives through the discovery of insulin. Duncan C. Ferguson shares the story of the canine's great contribution to man -- and how we can all reap the medical benefits.
Hanger is the grumpiness you feel when you are hungry. We've all been there, but what's the science behind it?
​Why do we sleep at night instead of during the day? In this episode of SciShow Hank talks about circadian rhythms, how they work, and how they regulate different processes in our bodies.
Learn how your biological clock or circadian rhythm tunes physiology, metabolism and brain function.  Dr. Satchin Panda's research shows thousands of genes in every cell turn on and off at specific times of the day. This gene orchestra dictates the optimum times for everything from athletic performance, shaving, taking medicine to cramming for an exam
Cool music video from the Stanford students- The Lion, the Watch and the Hormones
​Hank lets us in on the meaning of life, at least from a biological perspective - it's reproduction, which answers the essential question of all organisms: how do I make more of myself? So, sex, how does it work?
Hank fills us in on the endocrine system - the system of glands which produce and secrete different types of hormones directly into the bloodstream to regulate the body's growth, metabolism, and sexual development & function
​At this moment, three hundred million women across the planet are experiencing the same thing: a period. The monthly menstrual cycle that gives rise to the period is a reality that most women on Earth will go through in their lives. But why is this cycle so universal? And what makes it a cycle in the first place? Emma Bryce gives a primer on periods
​Infertility affects 1 in 8 couples worldwide. But in the last 40 years, more than 5 million babies have been born using in vitro fertilization (IVF). How does it work? Nassim Assefi and Brian A. Levine detail the science behind making a baby in a lab.
Having too much of each used to be the source of all your health problems...or so people thought, until William Harvey came on the scene and blew those ideas to smithereens. All but forgotten now, Harvey was a trailblazer, fighting against 1500 years of established scientific dogma, virtually by himself. He ruffled a lot of feathers, but eventually became a major influence on modern medicine. Remember the work of one of history's greatest Misunderstood Geniuses in this short video.
Reference sites