image from BC Open Textbooks
In the Blood System unit we we learn about how our blood system provides a delivery and collection service for the whole body. The heart, blood and blood vessels make up a most efficient transport system that reaches all cells, bringing the substances they need and taking away their waste. You will also learn that humans and other mammals have what is known as a closed circulatory system with blood contained inside a network of arteries, veins and capillaries. 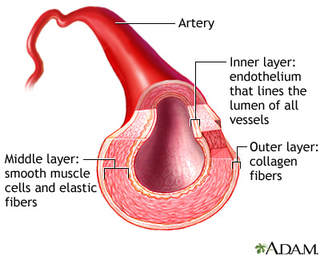 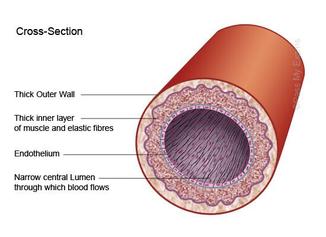 image from IB Biology Help
Cardiac Cycle Animation
6.2.U4 ​Blood flows through tissues in capillaries. Capillaries have permeable walls that allow exchange of materials between cells in the tissue and the blood in the capillary. (Oxford Biology Course Companion page 293)
The function of capillaries is to exchange materials between the cells in tissues and blood travelling at low pressure (<10mmHg):
​​

image from Wikipedia
Capillaries structure may vary depending on its location in the body and specific role:
6.2.U5 ​Veins collect blood at low pressure from the tissues of the body and return it to the atria of the heart. (Oxford Biology Course Companion page 293)
​The function of veins is to collect the blood from the tissues and convey it at low pressure to the atria of the heart:
​

6.2.U6 ​Valves in veins and the heart ensure circulation of blood by preventing backflow.  (Oxford Biology Course Companion page 294).
Since the blood pressure in the veins is quite low because the blood slows down considerably when it reaches the capillary bed and there is not another pump like the heart to speed up the flow and increase the pressure, veins have a series of valves to prevent backflow.
​ 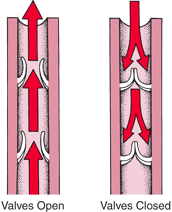 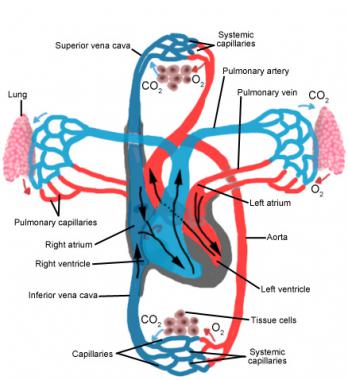 image from Medscape eMedicine
6.2.U8 ​The heartbeat is initiated by a group of specialized muscle cells in the right atrium called the sinoatrial node. (Oxford Biology Course Companion page 298)​
The contraction of the heart is myogenic. This means that the signal for cardiac compression arises within the heart tissue itself. In other words, the signal for a heartbeat is initiated by the heart muscle cells (cardiomyocytes) rather than from the brain: 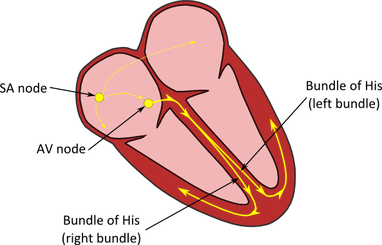 image from Natalies Casebook
Artificial Pacemaker
6.2.U10 ​The sinoatrial node sends out an electrical signal that stimulates contraction as it is propagated through the walls of the atria and then the walls of the ventricles. (Oxford Biology Course Companion page 299).Describe the propagation of the electrical signal from the sinoatrial node through the atria and ventricles.​
The electrical conduction of a heart beat occurs according to the following events:
This sequence of events ensures there is a delay between atrial and ventricular contractions, resulting in two heart sounds - Lub Dub.

6.2.U11 ​The heart rate can be increased or decreased by impulses brought to the heart through two nerves from the medulla of the brain. (Oxford Biology Course Companion page 301)​
​While the basal heart rate is determined within the heart by the pacemaker, it can be regulated by external signals.
​ 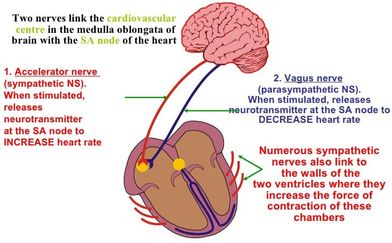 6.1.U12 ​Epinephrine increases the heart rate to prepare for vigorous physical activity (Oxford Biology Course Companion page 302​
​Hormones are chemical messengers released into the bloodstream that act specifically on distant target sites (like the heart). Heart rate can undergo a sustained increase in response to hormonal signalling in order to prepare for vigorous physical activity
​

image from IB Biology Help
Application
6.2.A1 ​William Harvey’s discovery of the circulation of the blood with the heart acting as the pump. (Oxford Biology Course Companion page 304) 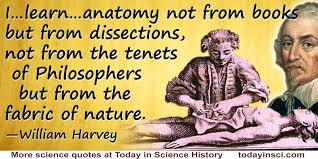 How the blood circulates around our body was discovered in the seventeenth century by a man named William Harvey. Click on the picture to get some background on Harvey. 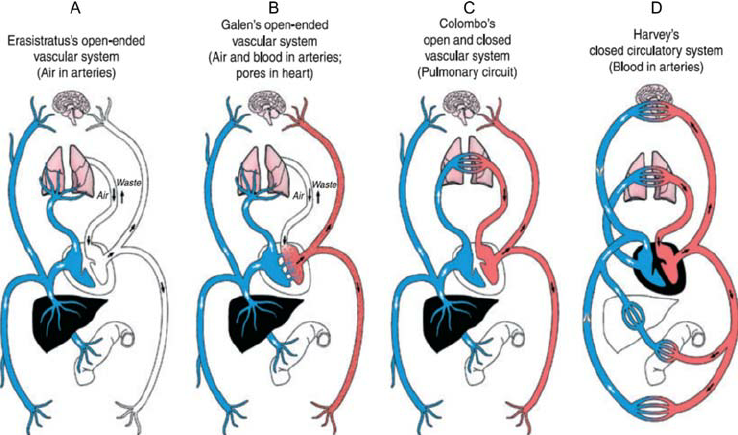 image from ResearchGate
6.2.A2 ​Pressure changes in the left atrium, left ventricle and aorta during the cardiac cycle.(Oxford Biology Course Companion page 297)​
The cardiac cycle describes the series of events that take place in the heart over the duration of a single heart beat
​Atrial Systole (0 to 0.1 s) 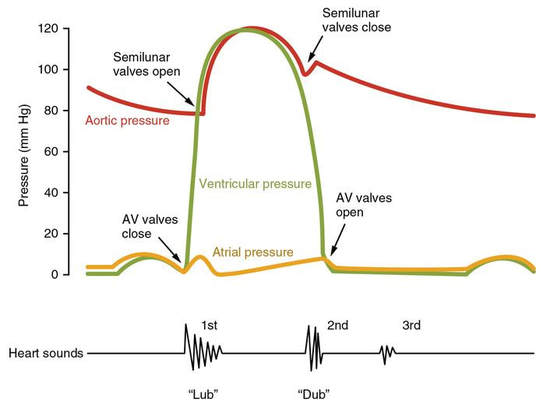 image from OpenStax CNX
6.2.A3 ​Causes and consequences of occlusion of the coronary arteries. (Oxford Biology Course Companion page 690)
Blood vessels that deliver oxygen and nutrient rich blood to the cardiac muscle tissue of the heart to allow it to pump blood around the body are known as coronary arteries 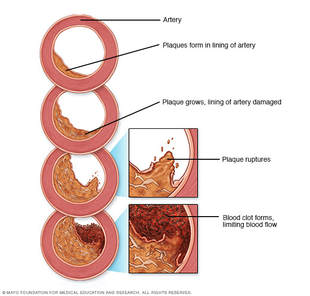 6.2.S2 ​Recognition of the chambers and valves of the heart and the blood vessels connected to it in dissected hearts or in diagrams of heart structure. (Oxford Biology Course Companion page 295).​

​Topic 6.2 Review
PowerPoint and Notes on Topic 6.2 by Chris Payne
​​​Correct use of terminology is a key skill in Biology. It is essential to use key terms correctly when communicating your understanding, particularly in assessments. Use the quizlet flashcards or other tools such as learn, scatter, space race, speller and test to help you master the vocabulary.

Can you explain why the flow of blood around the body is known as a double circulation?

Control of the Heart Beat

PH School BioCoach – Control of the Heart Beat
McGraw Hill: Conducting system of the heart
But does a heart actually need to ‘beat’? Well yes, if it is living. But not this rotor-based artificial heart.

Think about how fight-or-flight or exercise lead to a change in heart rate. Can you draw a flow-chart

Why not have a go at open heart surgery from abc.net.

Medmovie has good animations for atherosclerosis, heart attacks and heart bypass surgery. Not in the SL syllabus, but a useful topic for life

Learn how to give CPR

TOK
Video Clips:
​Now that we've discussed blood, we're beginning our look at how it gets around your body. Today Hank explains your blood vessels and their basic three-layer structure of your blood vessels. We're also going over how those structures differ slightly in different types of vessels. We will also follow the flow of blood from your heart to capillaries in your right thumb, and all the way back to your heart again.
​Great video clip on the SA and AV nodes of the heart from McGraw Hill
Drawing an IB Heart
​Hank takes us on a trip around the body - we follow the circulatory and respiratory systems as they deliver oxygen and remove carbon dioxide from cells, and help make it possible for our bodies to function.
​Paul Andersen surveys the circulatory system in humans.  He begins with a short discussion of open and closed circulatory systems and 2,3, and 4-chambered hearts.  He describes the movement of blood through the human heart and the blood vessels.  He discusses the major components of blood and the cause of a heart attack.
​For most of history, scientists weren't quite sure why our hearts were beating or even what purpose they served. Eventually, we realized that these thumping organs serve the vital task of pumping clean blood throughout the body. But how
How adrenaline and acetylcholine affect heart rate
​Approximately seven million people around the world die from heart attacks every year. And cardiovascular disease, which causes heart attacks and other problems like strokes, is the world’s leading killer. So what causes a heart attack?
​Hemophilia - Watch this digital animation, specifically developed by biotherapeutics leader CSL Behring for kids and/or caregivers of newly diagnosed patients with hemophilia A or hemophilia B, to learn more.
Reference sites