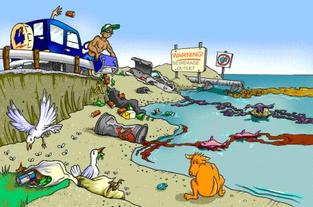 image from environmentandpollutionindia.wordpress.com
A pollutant is a substance or energy introduced into the environment that has undesired effects, or adversely affects the usefulness of a resource. A pollutant may cause long- or short-term damage by changing the growth rate of plant or animal species, or by interfering with human amenities, comfort, health, or property values (wikipedia.com).

Most cases of non-point source pollution exemplify well the intractable ethical problem of the “tragedy of the commons”. That is to say, an individual polluting a common resource suffers little themselves from their own pollution and yet may benefit considerably in other ways.

The interactions within the environment may be changed or damaged by human activity. Today, we are probably more conscious of the environment than ever before, but significant damage has already been done. Many of these activities continues today. Industrial processes, burning of fossil fuels, agricultural production, and growing population pressures all increased levels of pollution. Incidents such the Fukashima Powerplant and Deep Water Horizon, may grab big headlines, but just as important are the many small acts which added together increase the impact on a habitat

In this unit you will understand the concept of pollution, how pollution is formed, pollution management strategies, This unit is 2.5 hour.

Significant Ideas
Big questions:
Knowledge and Understanding
1.5.U1 Pollution is the addition of a substance or an agent to an environment through human activity, at a rate greater than that at which it can be rendered harmless by the environment, and which has an appreciable effect on the organisms in the environment.
[The term pollutant and contaminant in environmental chemistry are considered more or less synonymous] 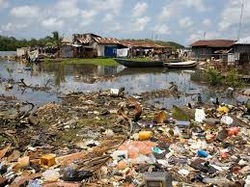 Pollution is the release into the environmental of a substance or an agent by human activities at a rate at which in cannot be rendered harmless.

Pollution can be natural, deliberate or may be accidental. It includes the release of substances that affect air, water and soil, and which reduces human quality of life.
1.5.U2 Pollutants may be in the form of organic or inorganic substances, light, sound or thermal energy, biological agents or invasive species, and may derive from a wide range of human activities including the combustion of fossil fuels.
Sources of pollutants are combustion of fossil fuels, domestic and industrial waste, manufacturing and agricultural systems.
Some sources of pollutants can't be contained by natural boundaries and therefore can act either locally, regionally or globally such as acid rain

You are expected to be able to construct system diagrams to show the impact of pollutants
U 1.5.3 Pollution may be non-point or point source, persistent or biodegradable, acute or chronic.
[Pollution which arises from numerous widely dispersed origins is described as non-point source. Point source pollution arises from a single clearly identifiable site]
​[Biodegradable means capable of being broken down by natural biological processes]
​
Point source pollution is generally more easily managed because its impact is more localized, making it easier to control emission, attribute responsibility and take legal action. 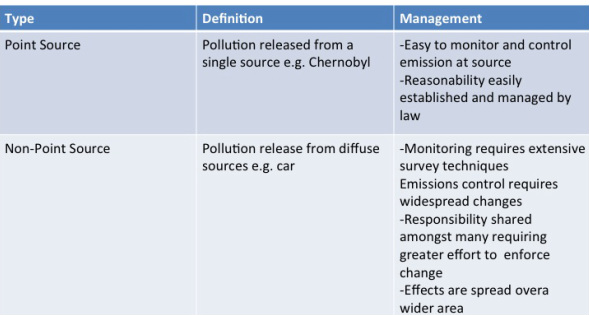 Chronic pollutants
1.5.U4 Pollutants may be primary (active on emission) or secondary (arising from primary pollutants undergoing physical or chemical change). 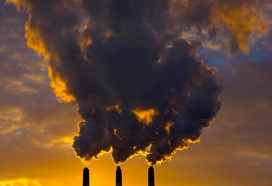 Pollutants are classified as primary or secondary based on their characteristics while they are emitted and physical/chemical changes they undergo while in the environment.

The pollutants emitted into the environment directly from the identifiable sources and remains unchanged within that environment are known as primary pollutants.

The pollutants which undergo chemical changes in the environment as a result of reactions among two or more pollutants are called secondary pollutants.

The pollutants like sulphur dioxide, nitrogen dioxide and particulates are recognized as primary pollutants while several other air pollutants are categorized as secondary pollutants.

image from www.gov.scot
1.5.U5 Dichlorodiphenyltrichloroethane (DDT) exemplifies a conflict between the utility of a “pollutant” and its effect on the environment.

image from www.scienceclarified.com
DDT was developed as the first of the modern synthetic insecticides in the 1940s. It was initially used with great effect to combat malaria, typhus, and the other insect-borne human diseases among both military and civilian populations and for insect control in crop and livestock production, institutions, homes, and gardens.

Rachel Carson highlighted the dangers of DDT in her groundbreaking 1962 book Silent Spring. Carson used DDT to tell the broader story of the disastrous consequences of the overuse of insecticides, and raised enough concern from her testimony before Congress to trigger the establishment of the Environmental Protection Agency (EPA).

Her work attracted outrage from the pesticide industry and others. Her credibility as a scientist was attacked, and she was derided as “hysterical,” despite her fact-based assertions and calm and scholarly demeanor. Following the hearings, President Kennedy convened a committee to review the evidence Carson presented. The committee's review completely vindicating her findings.

The use of DDT for malaria has many pros and cons that cause environmentalists, health organizations, and governments to fall on either side of the fence. The main questions to ask in this nuanced argument is whether the long-term health and ecological impacts of DDT outweigh the health benefits of DDT for malaria, and whether there are alternatives that might work better at lower cost.
Application
1.5.A1 Evaluate the effectiveness of each of the three different levels of intervention, with reference to Figure 3.[With reference to figure 3, students should appreciate the advantages of employing the earlier strategies of pollution management over the later ones, and the importance of collaboration]
Pollutants are produced through human activities and create long-term effects when released into ecosystems. Strategies for reducing these impacts can be directed at three different levels in the process:

Change the human activity that generates the pollutant in the first place.

Minimize the amount of the pollutant released into the environment.

Using Figure 3 show the value and limitations of each of the three different levels of intervention. Appreciate the advantages of employing the earlier strategies over the later ones and the importance of collaboration in the effective management of pollution. 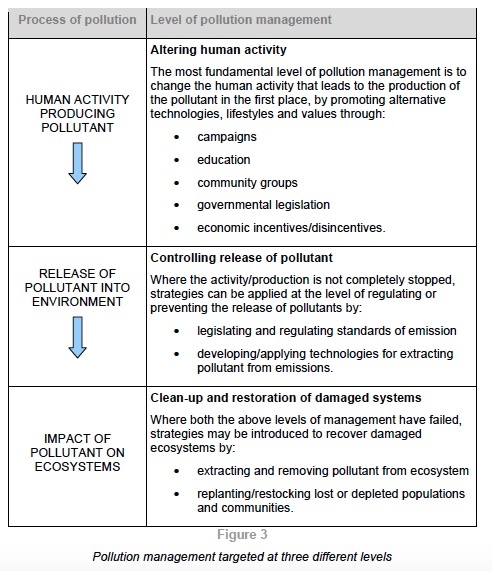 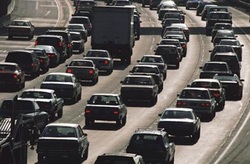 In many LEDC's, limited infrastructures such as the removal of domestic waste can become a major issue. Societies awareness of problems and cultural acceptances can also impact pollution management.


Cultural values, political systems and economic systems will influence the choice of pollution management strategies and their effective implementation. Real examples should be considered.


You need to be able to evaluate the effectiveness of each of the three different levels of intervention. The principles of this figure should be use through the course when addressing issues of pollution. You should appreciate the advantages of employing the earlier strategies of pollution management over the later ones, and the importance of collaboration.
1.5.A2 Evaluate the uses of DDT.
[Students might demonstrate knowledge of both the anti-malarial and agricultural use of DDT]
Skills
1.5.S1 Construct systems diagrams to show the impact of pollutants. 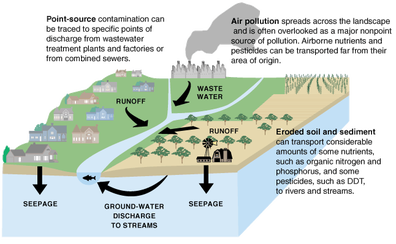 System diagrams allow individuals to visualize
and understand how processes work and how they might be improved. A process flow
diagram visually depicts:
Key Terms
Classroom Material
​
Pollution Case Study activity
World asks town that banned the plastic bag​ article
Impacts of Pollution on Biota IA
To Spray or Not to Spray activity


Case Studies
​Powerpoint and Notes Adapted from Brad Kremer, P Brooks and Ms. McCrindle
​​Correct use of terminology is a key skill in ESS. It is essential to use key terms correctly when communicating your understanding, particularly in assessments. Use the quizlet flashcards or other tools such as learn, scatter, space race, speller and test to help you master the vocabulary.
Useful Links

TOK
​Video Clips
Hank talks about the last major way humans are impacting the environment in this penultimate episode of Crash Course Ecology. Pollution takes many forms - from the simplest piece of litter to the more complex endocrine distruptors - and ultimately, humans are responsible for it all. ​
Hank gives the run down on the top five ways humans are negatively impacting the environment and having detrimental effects on the valuable ecosystem services which a healthy biosphere provides. ​
This video concentrates on the effects of Air, Water, and Land pollution. Landfills are very detrimental to our land Ecosystems. Oil Spills affect our seas and oceans, while we pollute the air with our terrible chemicals and smokestacks. In this quick documentary, you will learn about all these things, and more, ​
We’ve all been told that we should recycle plastic bottles and containers. But what actually happens to the plastic if we just throw it away? Emma Bryce traces the life cycles of three different plastic bottles, shedding light on the dangers these disposables present to our world. ​
​An environmental catastrophe caused by a mining disaster in Brazil has left 11 dead, 12 missing and some 600 displaced. Mining waste containing arsenic, zinc, copper and mercury turned Bento Rodrigues into a ghost town and is devastating the drinking water of towns across two states.
Around the globe, scientists are racing to solve a series of mysteries. Unsettling transformations are sweeping across the planet, and clue by clue, investigators around the world are assembling a new picture of Earth, discovering ways that seemingly disparate events are connected.
How do you want to see the environment? Greenfields or Brownfields
The Story of Cap & Trade is a fast-paced, fact-filled look at the leading climate solution being discussed at Copenhagen and on Capitol Hill. Host Annie Leonard introduces the energy traders and Wall Street financiers at the heart of this scheme and reveals the "devils in the details" in current cap and trade proposals.
Can we commit our bodies to a cleaner, greener Earth, even after death? Naturally -- using a special burial suit seeded with pollution-gobbling mushrooms
Synthetic chemicals are enriched in sea ice and later released into seawater as it melts. This has important consequences for biological exposure and uptake into the polar marine food web.
Historical clips on DDT, Rachel Carson and science explaining why humans pollute.
John Stosell and Richard Tren detail how the DDT ban, a great victory for environmentalism, has led to a multitude of deaths throughout the world
Annually, we shower over 5 billion pounds of pesticides across the Earth to control insects, unwanted weeds, funguses, rodents, and bacteria that may threaten our food supply. But is it worth it, knowing what we do about the associated environmental and public health risks?