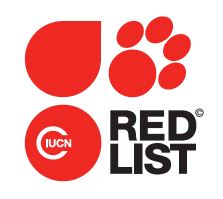 Image from http://en.wikipedia.org
Rate of loss of biodiversity may vary from country to country depending on the ecosystems present, protection policies and monitoring, environmental viewpoints and stage of economic development.

In this unit we will identify the factors that lead to biodiversity loss. You will also look at case histories of biological significance that is threatened by human activities. You should know the ecological, socio- political and economic pressures that caused or are causing the degradation of the chosen area, and the consequent threat to biodiversity. This unit is a minimum of 4 hours.

Significant Ideas
Big questions:
Knowledge and Understanding
3.3.U1 Estimates of the total number of species on Earth vary considerably. They are based on mathematical models, which are influenced by classification issues and a lack of finance for scientific research, resulting in many habitats and groups being significantly under-recorded.
[The total number of classified species is a small fraction of the estimated total of species, and it continues to rise. Estimates of extinction rates as a consequence are also varied, but current extinction rates are thought to be between 100 and 10,000 times greater than background rates​] 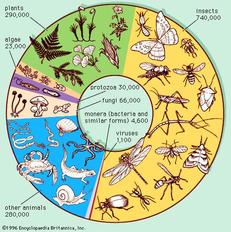 ​There are 8.7 million eukaryotic species on our planet — give or take 1.3 million. The latest biodiversity estimate, based on a new method of prediction, dramatically narrows the range of 'best guesses', which was previously between 3 million and 100 million. It means that a staggering 86% of land species and 91% of marine species remain undiscovered.

Knowing just who we share the planet with is of particular concern now because global warming, deforestation and other signs of human development are threatening many species, which may be essential to the functioning of ecosystems or may have inherent value in terms of developing medicines or other products.

One of the reasons we can’t get an accurate count is that the bulk of the things that have yet to be discovered and described are in the realm of the very small: insects, bacteria and other microbes.

Another part of the problem is that the tradition of taxonomy has been confined to the developed world for the bulk of its existence, leaving out the enormous diversity of much of the southern hemisphere, which is less developed on average. Species aren’t equally distributed across the Earth; they have these hotspots,
3.3.U2 The current rates of species loss are far greater now than in the recent past, due to increased human influence. The human activities that cause species extinctions include habitat destruction, introduction of invasive species, pollution, overharvesting and hunting. 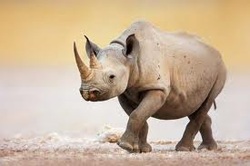 t has now become clear that the loss of biodiversity scientists have been reporting for the last few decades is more than the usual fluctuations seen in ecosystems. The current extinction rate is now approaching 1,000 times and may climb to 10,000 times during the next century, if present trends continue.” In 2005 the Millennium Ecosystem Assessment reported that 10-30 percent of mammal, bird, and amphibian species are threatened with extinction because of human activity. 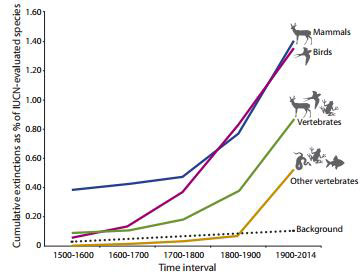 image from www.usnews.com
3.3.U3 The International Union of Conservation of Nature (IUCN) publishes data in the “Red List of Threatened Species” in several categories. Factors used to determine the conservation status of a species include: population size, degree of specialization, distribution, reproductive potential and behaviour, geographic range and degree of fragmentation, quality of habitat, trophic level, and the probability of extinction. 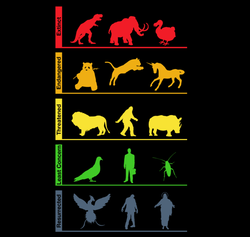 The conservation status of a species is an indicator of how likely it is to remain alive at present or in the near future.

Many factors are used to assess a species' conservation status, including: the number remaining, the overall increase or decrease in the population over time, breeding success rates and known threats.

Definitions of the conservation status categories are not required and the term “criteria” has been avoided due to the complexity of the Red List classification system.

3.3.U4 Tropical biomes contain some of the most globally biodiverse areas and their unsustainable exploitation results in massive losses in biodiversity and their ability to perform globally important ecological services. 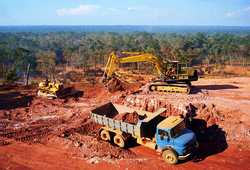 Rainforests once covered 14 percent of the Earth's land surface, now they cover 6 percent and experts estimate that the last remaining rainforests could be consumed in less than 40 years.

Tropical rainforests have been lost at a massive rate. Approximately 1.5 hectares of rainforest is cleared every second. About 50% of all timber is found in tropical rainforests, and timber is the second biggest resource after oil. Therefore the demand for and motivation to clear tropical rainforests is high. Tropical rainforests are also relied upon for subsistence agriculture. Many will clear forest, grow crops for 2-3 years and then more to a new site, this is called shifting cultivation. This can work as long as there is enough time for the forests to regenerate, but as population sizes increase and the demand for resources rises too many areas are cleared before they have had time to re-grow. This leads to a gradual degradation of nutrients and of biodiversity. It is estimated that it takes 1000 years for the biodiversity of the primary forest to be recovered and the secondary forest that does grow up is impoverished (of lesser quality) in many ways

You will want to consider
Tropical Rainforest: 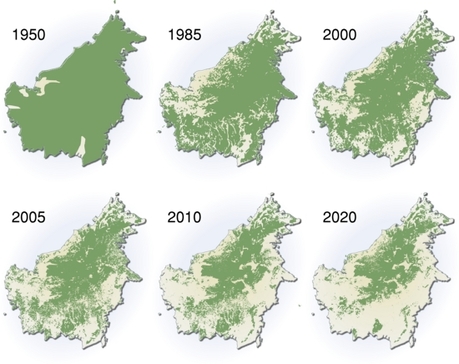 This shows how in the past and into the future, how the Amazon rainforest has been destroyed (green represents rainforest) 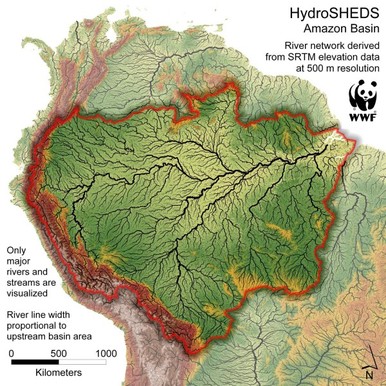 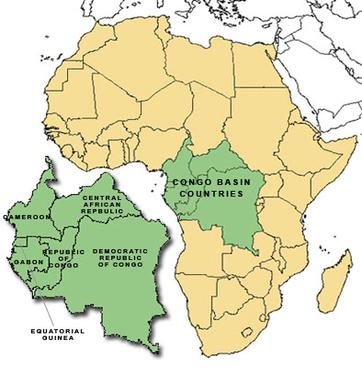 ​3.3.U5 Most tropical biomes occur in less economically developed countries (LEDCs) and therefore there is conflict between exploitation, sustainable development and conservation.
Application & Skills
3.3.A1 Discuss the case histories of three different species: one that has become extinct due to human activity, another that is critically endangered, and a third species whose conservation status has been improved by intervention
[Case studies of three species should be carried out. In each case, the ecological socio-political or economic pressures that are impacting on the species should be explored. The species’ ecological roles and the possible consequences of their disappearance should be considered.] 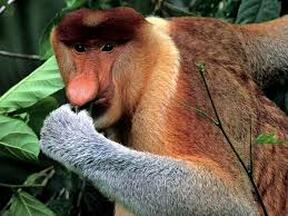 You will need to know the ecological, sociopolitical and economic pressures that caused or are causing the degradation of the chosen area, and the consequent threat to biodiversity. 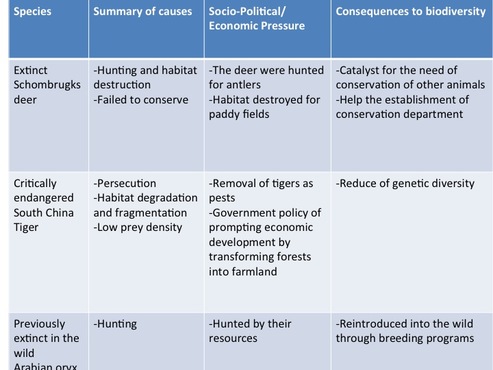 3.3.A2 Describe the threats to biodiversity from human activity in a given natural area of biological significance or conservation area 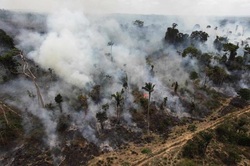 Factors leading to loss of diversity include:

Rate of loss of biodiversity may vary from country to country depending on: 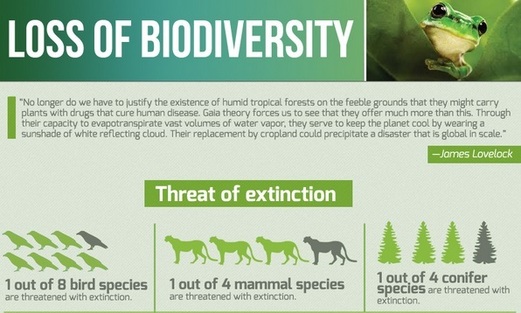 ​3.3.A3 Evaluate the impact of human activity on the biodiversity of tropical biomes

​As human population grows the need for agriculture, energy and development space increases with it. Tropical rainforests cover a massive amount of the world’s tree surface, each year over 90,000 square miles of the forests are harvested for human use. This deforestation has worried environmentalists because of the release of carbon from the machinery and the vegetation. It is believed that deforestation may accelerate the effects of global warming and transform the rainforest climate. Tropical Rainforests harbor 50% of world’s biodiversity, the massive deforestation of the forest has caused the total land mass to go 15 million km squared to about 8 million km squared, this is nearly half; it is estimated that nearly 2% of the rainforest is lost annually. Furthermore, Approximately 137 species are  lost in this biome per day, including both species of plants and animals and insects 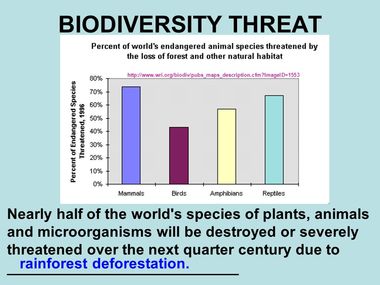 3.3.A4 Discuss the conflict between exploitation, sustainable development and conservation in tropical biomes

Controlling the loss of biodiversity requires international legislation  The willingness to participate in conservation initiatives varies from country to country and is very dependent on economics, social and political views.  Most tropic biomes are located in LEDC and in the countries there are conflicts between exploration of resources and sustainability Madagascar is trying to provide its people with with resources and conceive its natural resources 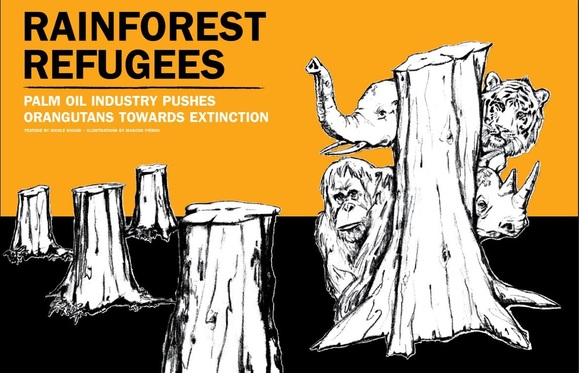 Case Studies          Include information about the species ecological role, the pressures on the species, consequences of extinction              and species restoration strategies
Powerpoint and Notes Adapted from Brad Kremer, P Brooks and Ms. McCrindle
Correct use of terminology is a key skill in ESS. It is essential to use key terms correctly when communicating your understanding, particularly in assessments. Use the quizlet flashcards or other tools such as learn, scatter, space race, speller and test to help you master the vocabulary.​
Useful Links

International-mindedness:
Theory of knowledge:
​Video Clips
The story centers around the sudden disappearance of honey bees from beehives around the world, caused by the poorly understood phenomenon known as Colony Collapse Disorder or CCD. Although the film does not draw any firm scientific conclusions as to the precise cause or causes of CCD, it does suggest a link between neonicotinoid pesticides and CCD.
Photographer Joel Sartore portrays some of the world's most imperiled creatures—from whooping cranes to wolves—before they become extinct.
Throughout humankind's history, we've driven species after species extinct: the passenger pigeon, the Eastern mountain lion, the dodo .... But now, says Stewart Brand, we have the technology (and the biology) to bring back species that humanity wiped out.
From bears to pandas and sharks to coral reefs; some 20,000 of the world's plant and animal species are currently threatened with extinction according to the International Union for the Conservation of Nature. The group's Red List of Threatened Species identifies populations most at risk with the aim of promoting biodiversity conservation.
The IUCN Red List of Threatened Species™ is widely recognized as the most comprehensive, objective global approach for evaluating the conservation status of plants, animals and fungi. The IUCN Red List includes a wealth of information which is used to identify the pressures that are pushing species towards extinction across the world.
IUCN video about the crisis of biodiversity and species extinction, and the main causes of it.
​
"Tropical rainforests currently remove around 15% of human CO2 emissions annually....but if you warm the Amazon it actually stops helping us and becomes a potential accelerator of climate change." ​
The Rainforest Alliance Sustainable Forestry Management Program in the Peten region of Guatemala provides training, technical assistance, and marketing support for sustainable forestry management, tourism and hospitality businesses. These efforts are part of the Rainforest Alliance's broader effort to transform the global tourism industry into one that benefits the planet and local communities.
Tropical Rainforest takes you on a 400 million year journey to illustrate the diversity and beauty of life in the forests. Featuring the birds and primates of the forest canopy and insects of the forest floor, Tropical Rainforest also shows the adventure of researchers challenged to understand the forests even as they disappear. From extreme close-ups to tree-top panoramas, the film lets you experience the forest on its own terms, to better understand and appreciate the treasures of this environment.
Most palm oil is produced in Malaysia and Indonesia on land that was once thriving rainforest. As global demand grows, more and more forests are being cleared. In areas such as Borneo and Sumatra, rich in biodiversity, deforestation can be catastrophic. Endangered species including orang-utans, tigers, elephants and rhinos are losing critical habitats, pushing them toward extinction.
The northern white rhino is on the brink of extinction.  Poachers decimated the population, but now science has a chance to bring it back.  VOA’s Arash Arabasadi reports